Asymmetry in the dentition can be caused by a difference between the left and right sides in terms of facial skeletal configuration or position of teeth within the jaws or by a combination of both. Small asymmetries of the skull and face, as well as misalignment of the midlines of the dental arches, occur frequently and are rarely troublesome.1–3 Asymmetries in facial configuration can be traced to genetic factors, trauma, or pathologic processes. Deviating facial growth can cause and/or exacerbate asymmetries. Asymmetries in tooth position may be caused by differences in the location where corresponding teeth are formed, premature loss or extraction of deciduous teeth followed by migration, or agenesis or extraction of permanent teeth.

Asymmetries in the occlusion caused by the facial skeletal configuration are usually caused by a deviation in the mandible (Fig 15-1). There are various types of asymmetries caused by deviant locations of tooth formation sites6,7 (Fig 15-2). 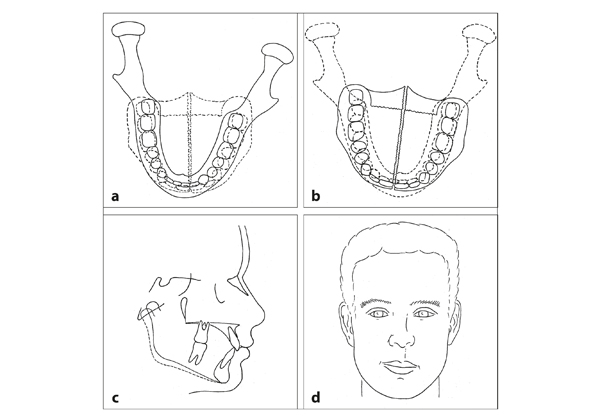 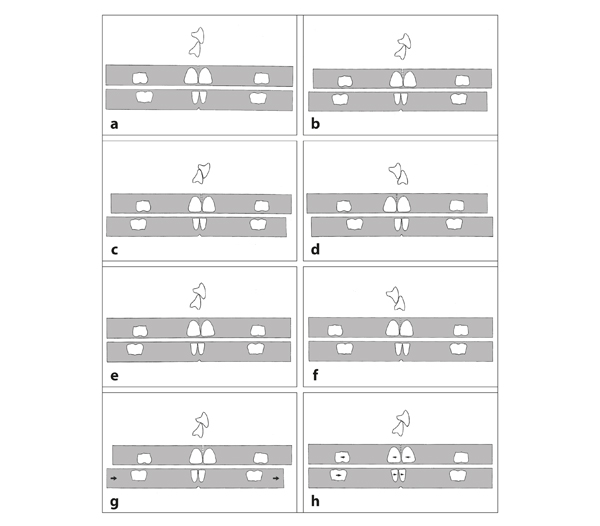 As indicated, asymmetry in the dental arches can arise secondary to or become aggravated by premature loss of deciduous teeth (Fig 15-3) and agenesis or extraction of permanent teeth. This occurs because teeth tend to migrate in the direction where a tooth is missing (Fig 15-4). 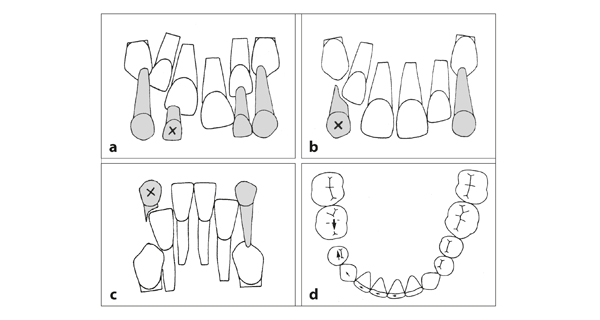 Fig 15-4 Asymmetry due to agenesis or extraction of a permanent tooth. (a) A missing maxillary right lateral permanent incisor will result in tipping of the other three incisors to the right side, but the roots will not pass the median suture. (b) However, there is no structure in the mandible that prevents the migration of an incisor through the median plane. (c) Agenesis of a mandibular second premolar leads to migration on both sides. (d) Agenesis of a maxillary right lateral permanent incisor and of a mandibular left second premolar has a cumulative effect on the deviation of the midlines of the dental arches.

There is a large variation in asymmetries and transverse deviations of the dentition in children and adults. Differences between the left side and the right side in sagittal occlusion of the posterior region (ie, subdivisions) are associated with deviations of the midlines of the dental arches (Figs 15-5 to 15-7). Sometimes the transverse occlusion deviates only on one side (Fig 15-8). The transverse occlusion can also deviate on both sides, as in a telescoping bite, ie, complete maxillary buccal crossbite (Figs 15-9 and