6 Changes in the Molar Region

Changes in the Molar Region

The region where the permanent molars are formed and emerge increases gradually in size. The posterior growth of the alveolar process is limited to 1 to 2 mm a year.1,2 The mineralization of the third molars starts 6 years after that of the second molars. There is also a 6-year period between times of emergence of the three permanent molars.

Available Space for Molar Development and Orientation of Tooth Buds

There is a large difference between the maxilla and the mandible regarding the space available for the development of the molars and the orientation of the forming molars.

The mandibular ramus provides space for the second and third molars to begin their formation. Initially, they are located superior to the level of the occlusal plane and partially overlap each other. Through vertical growth of the mandibular body and the alveolar process, they attain an inferior position in relation to the other mandibular teeth. Furthermore, the roots of the forming mandibular second and third molars are positioned posterior to their crowns. This mesial angulation gradually decreases (Fig 6-1). 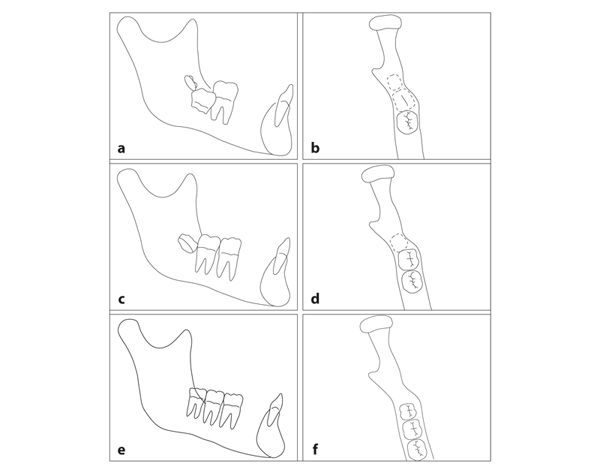 Fig 6-1 Relationship between mandibular growth and development of permanent molars. The mandibular second and third molars are formed in the part of the jaw where the corpus intersects with the ramus. (a and b) At 6 years of age, when the first permanent molar has reached the occlusal plane, the forming second molar is located at the slight lateral bend of the mandible. The second molar is then mesially angulated and distobuccally rotated. The third molar starts its formation in the ramus. (c and d) By the time the second permanent molar has reached the occlusal plane, its angulation and rotation are reduced. The distal part of the crown has moved to the lingual and is located mesial to the lateral bend of the mandible. (e and f) The eruption and change in position of the third molars occurs in a comparable way 6 years later. In the meantime, the mandible has grown sufficiently to the posterior to house the third molar without distobuccal rotation.

In the maxilla, the second and third molars are formed in the limited region of the maxillary tuberosity. They cannot be arranged horizontally as forming deciduous molars are. Rather, they are stacked in a posterosuperior direction and overlap each other vertically. They are formed at a distal angulation, and their roots are close together2 (Fig 6-2). 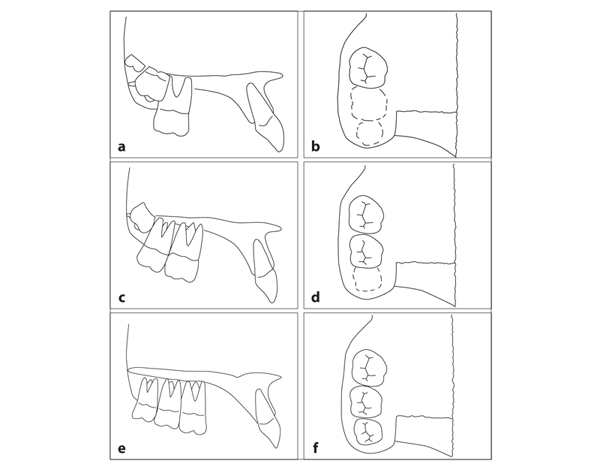 In accordance with the limited space, the maxillary second molars emerge in a distobuccal direction. When they reach occlusion, they are still distally angulated. More space has to be created by growth of the maxillary tuberosity to the posterior before their roots can move distally. After the crowns of the third molars have descended, they can upright and ultimately develop a mesial angulation. Indeed, the position and angulation of the maxillary second and third permanent molars depend on the amount of growth of the maxilla and the presence or absence of third molars.

It often occurs that the growth of the jaws to the posterior is insufficient for adequate emergence of third molars. Mandibular molars can remain impacted without necessarily causing any problems. However, if they are partially emerged and only the mesio-occlusal aspect of the crown is visible, an infection can develop between the unexposed portion of the crown and the covering gingiva, leading to a swollen cheek. Surgical intervention is then needed. Maxillary third molars are less frequently impacted. With shortage of space, they emerge distobuccally. Extracting them is a simple procedure.

The change in position of erupting mandibular third molars varies. In addition to spatial conditions, differences in speed of formation between the mesial and distal roots might play a role.6

Size of the Posterior Section of the Apical Area

The size of the posterior section of the apical area is the decisive parameter in the eruption and emergence of permanent molars. This aspect is illustrated for the mandible in Fig 6-3 and for the maxilla in Fig 6-4. 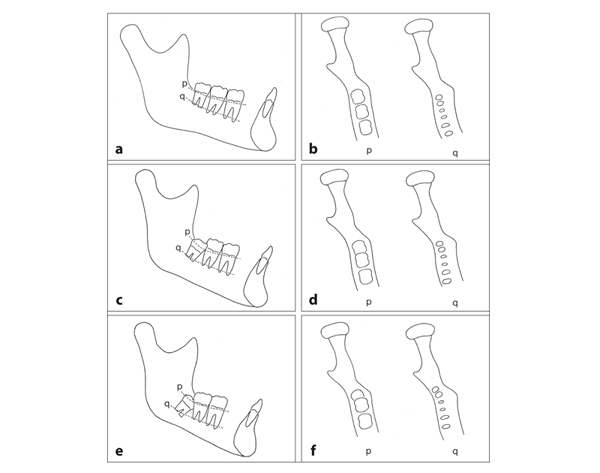 Fig 6-3 Variations in the size of the posterior section of the mandibular apical area in adults. (a and b) In a large posterior section, the third molar has adequate space to emerge well. There may even be excess space distally. At the level of the cervical borders, the teeth are positioned at the same height (p). The apices are at equal distances apart (q). (c and d) In a medium posterior section, the third molar is tipped mesially and partly emerged. Its crown is distobuccally rotated, and the apex of the distal root is situated in the laterally deviati/>

Tags: Development of the Human Dentition
Jan 4, 2015 | Posted by mrzezo in General Dentistry | Comments Off on 6 Changes in the Molar Region
Premium Wordpress Themes by UFO Themes
WordPress theme by UFO themes