The first local changes leading to the formation of teeth occur in the 6th week after conception. At that time, the oral cavity is formed and covered with a two-layer epithelium with still-undifferentiated mesenchyme underneath. Between the two layers lies the basal membrane, which facilitates the communication between the two types of tissue.

At the location of the future dental arches, the epithelium thickens, and the dental lamina develops. At every location where a tooth has to appear, the ectoderm of the dental lamina bulges into the mesenchyme. The initial shape of the crown is formed by local differences in mitotic activity (differential proliferation) of the epithelium and mesenchymal tissue. The basal membrane is situated at the future enamel-dentin border. The mesenchymal cells at the inner side of the basal membrane differentiate into odontoblasts; the epithelial cells on the outer side differentiate into ameloblasts. These cells deposit dentin and enamel on the basal membrane and form the crown. Subsequently, the odontoblasts build up the dentin of the root. At the external side of the root, cementum is deposited by cementoblasts, which are differentiated from mesenchymal cells (Fig 1-1). 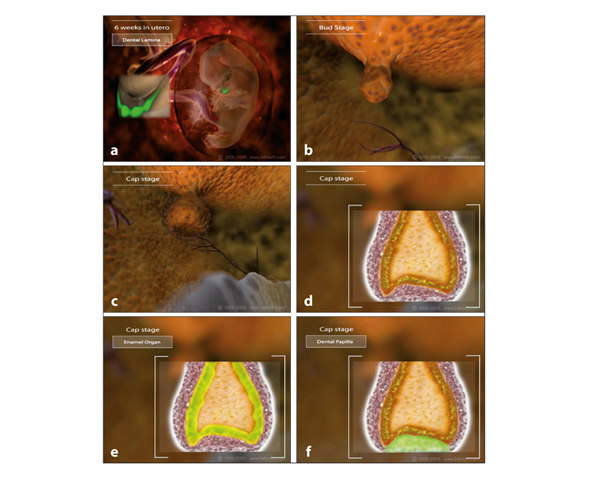 Fig 1-1 The formation of a deciduous incisor. (a) In the 6th week after conception, the oral epithelium thickens by differential proliferation at the location where the dental arches will arise. The dental lamina is formed. (b) At every location where a tooth has to be formed, the ectodermal tissue bulges into the mesenchymal tissue of the dental lamina, resulting in a tooth bud. (c) Extended growth of the epithelium of the tooth bud by differential proliferation results in a cap. (d) The cap will partially enclose a cell-dense mass of mesenchymal cells. (e) At the inner lining of the epithelial cap, the cells become cylindrically shaped. These are the preameloblasts, the precursors of the cells that later will deposit enamel onto the basal membrane. (f) The external surface of the cap continues to consist of cuboidal cells. Within the cap tissue, the stellate reticulum, a loose structure of mesenchymal cells, is formed. The cells at the periphery of the cell-dense mesenchymal mass become arranged along the basal membrane and differentiate into preodontoblasts. These are the precursors of the cells that will deposit dentin at the basal membrane. 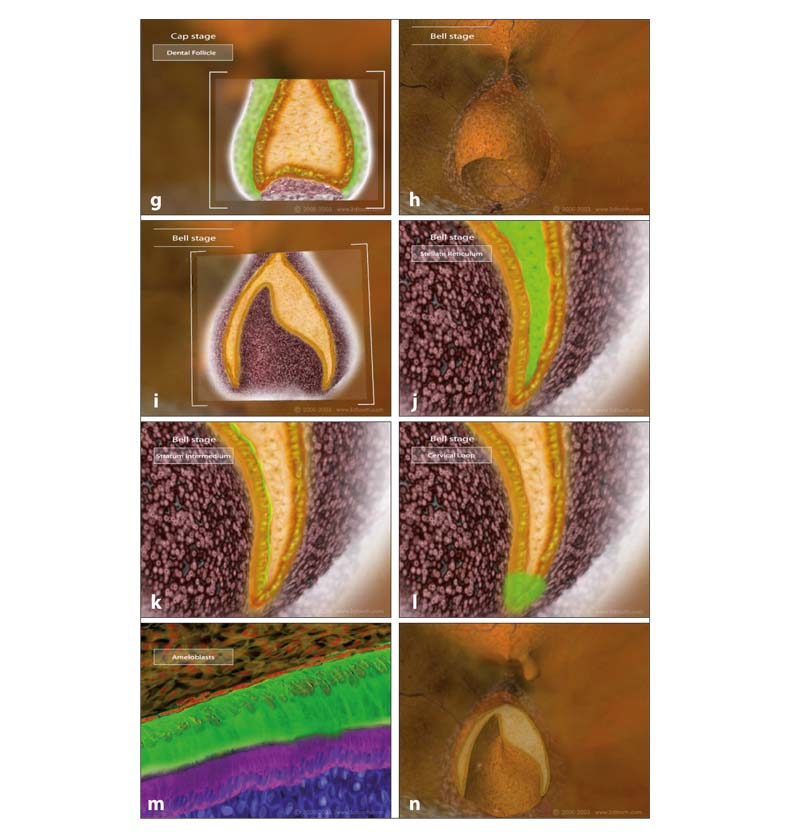 Fig 1-1 (cont) (g) The remaining part of the dental papilla differentiates into the pulp. The mesenchymal cells around the cap form the dental follicle, which later will lead to the formation of the periodontal ligament. (h and i) The total structure has attained a bell form. (j and k) A separate cell layer, the stratum intermedium, arises between the preameloblasts and the stellate reticulum. (l) At the edge of the cap, where the external layer becomes the inner lining, a cervical loop is formed. (m) Prior to the deposition of enamel and dentin, the basal membrane together with the preameloblast and preodontoblast layers have attained the form of the future crown. (n) Then the crown stage starts. 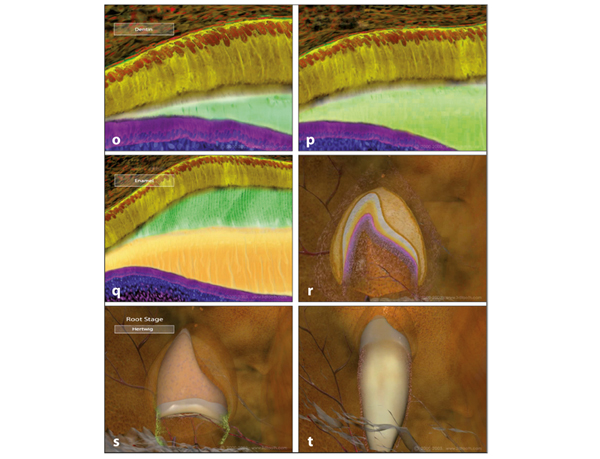 Fig 1-1 (cont) (o and p) The preodontoblasts differentiate into odontoblasts that deposit the first dentin at the basal membrane. (q) Shortly thereafter, the preameloblasts differentiate into ameloblasts and begin to deposit enamel at the already formed dentin. The dentin is deposited in the direction of the basal membrane. During that process, the odontoblasts migrate in the direction of the pulp, leaving odontoblastic processes behind in the dentinal tubules. The ameloblasts deposit enamel also in the direction of the basal membrane but do not leave processes behind. (r) The enamel deposition continues until the crown is completely formed. (s) After the crown is finished, root formation starts. The tissue of the cervical loop proliferates further in an apical direction and forms the epithelial stocking that is called the Hertwig root sheath. (t) Pulpal cells become arranged at the inner side of the Hertwig root sheath and differentiate into preodontoblasts and subsequently into odontoblasts, which will deposit the dentin of the root. With the outgrowth of the Hertwig root sheath, gaps appear in its cervical part. Mesenchymal cells of the tooth follicle migrate through these openings to the root surface. Thereafter they differentiate into precement-oblasts and further into cementoblasts, which deposit cementum against the dentin of the root. See video clip 1. (Printed from Van der Linden et al with permission.)

The morphogenesis of incisors, canines, and molars is essentially the same. Only the timing and form vary.2

Forming molars gradually increase in size by interstitial growth of the inner enamel epithelium. Mineralization starts at one future cusp tip (Fig 1-2). In a genetically determined sequence, ameloblasts and odontoblasts differentiate at other future cusp tips, followed by mineralization. Areas that are not yet mineralized can still increase in size. After the mineralizing fields have become connected (ie, coalescence), the distance between the cusp tips involved cannot increase further. Enamel deposition continues in the valleys between the cusp tips and at the circumference of the crown. After the entire circumference of the occlusal part of the crown is mineralized, only deposition of enamel at the circumference of the crown contributes to the increase in the mesiodistal and buccolingual dimensions (Figs 1-3 and

Tags: Development of the Human Dentition
Jan 4, 2015 | Posted by mrzezo in General Dentistry | Comments Off on 1 Formation of Teeth
Premium Wordpress Themes by UFO Themes
WordPress theme by UFO themes