Caries, as the primary cause of tooth loss in all age groups (Chestnut et al., 2000; Fure, 2003; Broadbent et al., 2006), places a large biological, sociological, and financial burden on society (Miller, 1978; Gift et al., 1992). Essentially, it is a bacterial infection exacerbated by an array of biological and behavioral interactions that over time weaken and ultimately demolish tooth structure (Figure 9.1). 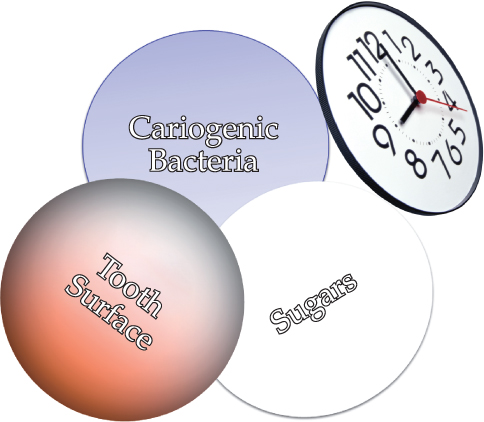 The risk of infection increases substantially when inadequate oral hygiene permits large numbers of bacteria to accumulate on the teeth, and when frequent ingestions of sugars and refined carbohydrates provide the nourishment for bacteria to produce acids that demineralize, and ultimately, weaken the structural integrity of teeth (Wyatt and MacEntee, 1997).

The infection is particularly prevalent among vulnerable segments of the elderly population who cannot access regular dental care because they are institutionalized or housebound (Wyatt, 2002a, b; Wyatt and MacEntee, 2004; Institute of Medicine, 2009). Indeed, we are at particular risk to caries when old and frail because many of the medications for the usual physical and cognitive disabilities of old age disturb the natural buffering capacity of saliva that, under healthier circumstances, neutralizes the salivary pH induced by acidogenic bacteria (Chew et al., 2008).

The collapse and destruction of the natural dentition as a consequence of this carious process typically leads to chewing difficulties and disfigurement. However, only rarely is it associated with toothache in older teeth, probably because the insulation from secondary dentin deposited over the years allows the structural collapse without the acute sensitivity and pain that emerges from younger teeth (Fejerskov and Nyvad, 1986; Schüpbach et al., 1990; MacEntee, 1994). However, the accumulation of bacteria associated with rampant caries can have a more insidious outcome by increasing the risk of aspiration pneumonia and an untimely death (Taylor et al., 2000).

Streptococcus mutans, Streptococcus sobrinus, Streptococcus cricetus, Lactobacilli, and possibly several other microorganisms live within the biofilm adhering to teeth (Preza et al., 2008). They produce acids from fermentable sugars in dental plaque, and acid demineralizes enamel, cementum, and dentin. The acidic demineralization is more likely on the root surfaces of teeth as the loss of gingival attachment exposes the less resistant cementum and dentin. And, so, the likelihood of caries increases with advancing age and gingival recession when the frequency of sugar consumption is high and the effectiveness of toothbrushing is low.

Carious lesions expand and are seen as cavities when the organic matrix of a tooth collapses without adequate mineral support. Typically, inactive or quiescent lesions have smooth or rounded rather than sharp or ragged edges, probably because rough edges are smoothed by normal wear and tear when the lesion stops expanding (Fejerskov et al., 2008). Early carious lesions typically are not cavitated but have a yellowish-brown color (Figure 9.2, arrow a), but with time they becomes dark brown cavities as lesions expand under the enamel (Figure 9.2, arrow b). 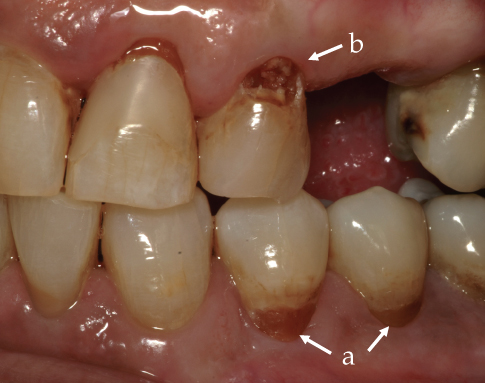 A demineralized matrix allows the cariogenic bacteria to penetrate further into the dentin and underneath the enamel. If the lesion in the dentin is large and expanding slowly, the periphery will look rough and lightly yellow while the center is hard and a darker yellowish brown as the dentinal tubules are sclerosed with new mineral deposits.

In its more rampant state, caries attacks the coronal and root surfaces of most teeth, and if the lesions expand slowly the cavities will look black and ominous (Figure 9.3). 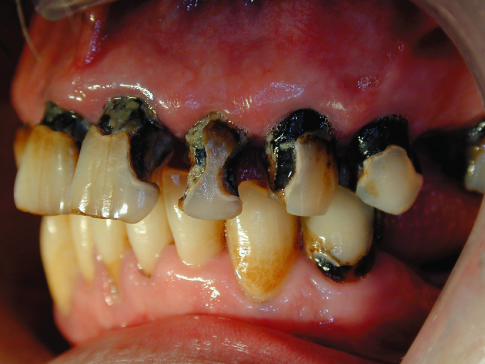 The color of the lesion reflects the mixture of organic and inorganic tooth structure infiltrated by food, medications, and other chemicals. Therefore, color is not a very reliable or sensitive indicator of pathological activity. The raggedness or smoothness of the lesion’s periphery along with the feel or texture of the surfaces are better indicators of carious activity. Unfortunately, probing or curetting an incipient lesion will damage the matrix irreparably and eliminate the possibility of remineralizing the tooth to its natural contour, although it does not eliminate the possibility of remineralizing the damaged matrix to inactivate the carious process (Beighton et al., 1991, 1993). It is preferable, therefore, to judge carious activity by assessing the physical appearance and cavitation of the lesion’s surface and periphery against the presence or absence of the behavioral risk factors, such as frequency of sugar consumption, medications, and oral hygiene.

DISTRIBUTION OF CARIES IN OLD AGE

Caries is a prevalent infection among elderly people as they grow frail. Recent data from the United States suggest that the average attack rate annually in older Americans over the last decade or so was about one new carious surface per person per year, which is similar to or higher than the attack rate reported on children (Griffin et al., 2005). The practical relevance of this attack rate to the incidence of the infection in the population is unclear because “late elder caries,” like “early childhood caries,” tends to occur rampantly within highly susceptible segments of the population, and much less aggressively or prevalently in the rest of the population (Wyatt and MacEntee, 1997). In any event, the infection can be very destructive in a short period of time for those who are susceptible to it (Frenkel et al., 2000; Wyatt, 2002a, b; Saub and Evans, 2001; Chalmers et al., 2002; Carter et al., 2004). Therefore, it is necessary to take action to prevent the disease when the risk is high.

A major challenge to improving oral health in older populations is the lack of coordination between oral health, public health, and healthcare systems, and in particular, the overriding focus in dental practice on treatment rather than prevention of dental diseases. For many people, globally, dental treatment is simply unavailable or unaffordable (Institute of Medicine, 2009).

Dry mouth and dysfunctional salivary glands are usually the result of medications or radiation therapy that disturbs the flow or buffering capacity of saliva, and as a consequence they increase substantially the risk of caries (Chew et al., 2008; Turner and Ship, 2007). A remarkably large number of medications for a wide variety of chronic disorders interfere with salivary glands (Ikebe et al., 2005). Antidepressant and antipsychotic drugs prescribed for depression accompanying Alzheimer’s disease, for example, lead almost inevitably to caries when compounded by the usual disinterest in personal hygiene and the cariogenic diets of people with severe dementia and depression (Anttila et al., 1999; Friedlander and Norman, 2002). Fortunately, for many of the disorders, there are alternative medications with much less impact on saliva (see Chapter 4).

Preventing or reversing incipient and noncavitated carious lesion is achieved most effectively by a combination of altering the mineral structure of teeth, reducing the quantity and virulence of bacterial plaque on the teeth, and reducing the frequency of sugar consumption in the diet. These changes can be achieved by combinations of the following therapeutic strategies: (1) fluoride-containing toothpaste and mouthrinses; (2) oral hygiene; (3) sugar ingestions; (4) antimicrobial agents; and (5) pharmacological replacements. Fluoride applications alone might not be sufficient to prevent caries when salivary glands are dysfunctional, and it might be necessary to create a concentrated gradient of calcium and phosphate ions in saliva that will facilitate the diffusion of ions into the organic matrices of the teeth (Singh and Papas, 2009). The presence of statherin and the proline rich proteins in saliva promote a supersaturated concentration of calcium and phosphate ions and subsurface remineralization.

A concentration of fluoride ions in dental plaque and saliva simultaneously inhibits demineralization and enhances remineralization by promoting fluoroapatite. Fluoride, in one form or another, is the most effective chemical agent for remineralizing teeth and strengthening dental surfaces against demineralization (Ingram and Edgar, 1994). It is readily available in mouthrinses, toothpastes, gels, and varnishes, without evidence that any one form is therapeutically superior (Ravald and Birkhed, 1992).

Concentrations of fluoride, either as sodium fluoride or monofluorophosphate, in toothpastes sold in the United States range from 1,000 to 1,500 ppm (concentration of fluoride in toothpaste are presented usually in parts per million [ppm] because most toothpaste manufacturers report only the percentage of the fluoride compound in the tube of paste) (Centers for Disease Control and Prevention, 2009), whereas in Europe the concentrations are lower (∼450 ppm) due to concerns about dental fluorosis in children (Dental Health Foundation—Ireland, 2010). Fluoride concentrations of 1,000 ppm or higher will prevent demineralization of dental surfaces and enable remineralization of incipient carious lesions if part of a daily health-promoting regimen (Jensen and Kohout, 1988). In addition, therapeutic concentrations of 5,000 ppm will double this protection and remineralization of the tooth structure within cavitated lesions (Stephen et al., 1988; Baysan et al., 2001). Similar dose-related protection and remineralization of coronal and root surfaces is possible with a daily mouthrinse of about 250 ppm (0.05%) to 500 ppm (0.2%) sodium fluoride (Ripa et al., 1987; Wyatt and MacEntee, 2004).

A mouthrinse of 920 ppm (0.2%) neutral sodium fluoride used daily will reduce the incidence of new caries and reverse demineralization of new lesions (Wyatt and MacEntee, 2004). Two daily applications of a 5,000 ppm fluoride toothpaste will also prevent caries, while a varnish containing 22,600 ppm (5%) of sodium fluoride applied once a month by a dentist or dental hygienist is similarly effective (Weintraub, 2003; Ekstrand et al., 2008). Alternatively, an acidic (pH ∼3) gel containing 0.4% />