Mr. Yafnaro is 75 years of age. He had periodontal disease that was treated successfully over the past 20 years. However, on his latest clinical examination, his gingival tissues were swollen, they bled on probing, and the periodontal pockets had increased significantly since the previous recording 6 months prior. Now, most of the pockets are deeper than 5 mm, and yet his oral hygiene regimen is moderately effective as before. However, his general health is obviously frailer than previously, and he advises you that he is a “borderline” diabetic. Nonetheless, he reports with enthusiasm that he selects his diet carefully to control the diabetes, and his weight is now closer to the weight he proudly carried as a young man!

What do you think is happening to Mr. Yafnaro, and how do you care for him?

Periodontitis is a mixed bacterial infection, predominantly caused by gram-negative anaerobic species, resulting from the deposition of plaque and calculus both above and below the gingiva. If left undisturbed, bacterial toxins and other cell-associated products can induce an inflammatory response systemically and within periodontal tissues. The local inflammatory processes lead to the breakdown of the periodontium, and tooth loss can ensue if left untreated. The goal of periodontal treatment for frail elders is to establish and maintain oral comfort and prevent tooth loss. Consequently, frail people and their carers should know about the importance of oral care and hygiene (Kornman et al., 1994). Treatments of gingivitis and periodontitis should be rendered with minimal stress and control of potential complications. Moreover, dentists occasionally are the first to see signs of diabetes and other systemic diseases that warrant referral to a physician.

Treatment of the early stages of periodontitis consists of scaling and root planing, and in many cases, the response will be a reduction in clinical signs of tissue inflammation, such as erythema, bleeding, and pain on probing, accompanied by reductions in probing depths and tooth mobility. However, in more severe cases, surgery produces a better environment for long-term maintenance of the periodontium. Either way, if periodontal health deteriorates, systemic antibiotic treatment (e.g., metronidazole, metronidazole plus amoxicillin, doxycycline) with or without local antimicrobial therapy (e.g., doxycycline hyclate, minocycline hydrochloride, tetracycline hydrochloride) might be required.

Optimal treatments for younger patients may not necessarily be suitable for frail patients. Nonsurgical treatments supported by good daily oral care, for example, are generally preferable for patients with comorbid systemic illnesses such as cardiovascular diseases (CVDs). Indeed, teeth with quite severe periodontal disease can function quite successfully for several years if managed with a combination of debridement augmented by short-term applications of antimicrobial agents (e.g., metronidazole, doxycycline) for 5–7 days (Loesche et al., 2005).

The relationship between oral health, diabetes, CVD, and other diseases in elders is complex. Periodontal treatment reduces the levels of risk markers for CVD by decreasing, for instance, serum levels of C-reactive protein and increasing carotid elasticity (Tonetti et al., 2007; Paraskevas et al., 2008). However, despite several untested models or theories, there is no direct evidence showing that periodontitis causes CVD. It is important nonetheless to recognize the increased clinical risk of CVD, and the potential of good periodontal care to reduce the risk of CVD, especially in people who are frail. Consequently, the American Academy of Periodontology and the American College of Cardiology jointly recommend that dentists refer patients for a cardiovascular assessment when periodontitis is diagnosed (Friedewald et al., 2009).

In the United States, about one in four newly diagnosed diabetics have overt signs of CVD, while diabetes or glucose intolerance is present in about one-third of the older (>65 years) population (Wilson and Kannel, 2002). People with diabetes are at particular risk to periodontitis, and conversely, periodontal infections increase the severity of diabetes (Grossi and Genco, 1998). Although periodontitis does not necessarily coexist with diabetes in older people (Persson et al., 2003), it does interfere with glucose tolerance and glucose metabolism (Saito et al., 2004; Bullon et al., 2009).

Coronary heart disease, congestive heart failure, cerebrovascular disease, peripheral arterial disease, rheumatic heart disease caused by streptococcal infection, congenital heart disease, deep vein thrombosis, and pulmonary embolism are all disorders of the heart and blood vessels (WHO, 2009). Dental treatment, if not managed properly, is associated with pain, anxiety, and discomfort (Vassend, 1993) and may be perceived as a stressful experience. Changes in concentrations of adrenaline and noradrenaline occur in plasma and urine after preparing, restoring, or extracting teeth (Brand et al., 1995a). Furthermore, changes in heart rate and mean systolic and diastolic blood pressure (BP) are induced not only by dental treatment but also by the patient’s anticipation of the treatment (Brand and Braham-Inpijn, 1996). Hypertensive and borderline hypertensive patients have a systolic BP of >140 mmHg and/or a diastolic BP of >90 mmHg, and their systolic pressure increases by about 5 mmHg when invited merely to describe dental problems (Brand et al., 1995a). The systolic BP in hypertensive patients increases much more markedly than in normotensive patients during scaling and root planing (Singer et al., 1983), administration of local anesthetic (Brand et al., 1995b), and oral surgery (Meiller et al., 1983). The consequences in frail patients with CVD could be serious.

It is wise therefore to provide short appointments with minimal pain or stress. Many dental procedures, including scaling and root planing, require local anesthetic with a vasoconstrictor, at least until inflammation has been reduced. Vasoconstrictors do not always increase BP (Silvestre et al., 2001), but from a clinical perspective, it is prudent to avoid epinephrine altogether or reduce it as much as possible in patients with CVD (Vernale, 1960).

Management of patients on cardiovascular drugs

Some drugs used in the treatment or prevention of CVDs increase the risk of bleeding. Anticoagulants, such as warfarin, are used widely to prevent blood clots in patients at risk of atrial fibrillation or other thromboembolic diseases, but they can cause serious bleeding when scaling teeth, especially if gingival inflammation is severe. Similarly, excessive bleeding causing hypovolemic shock can occur anytime up to 12 h after scaling teeth for patients on antiplatelet agents, such as acetylsalicylic acid (ASA), ticlopidine, clopidogrel, or dipyridamole (Elad et al., 2008). Indeed, posttreatment bleeding is more likely to occur after scaling and root planing than after surgery, particularly in patients on anticoagulants.

Typically, 81 mg/day of ASA is the preventive dose for patients with CVD, and it would make sense to reduce the dose in frail elderly to somewhere in the range of 50 mg/day, but there is no empirical evidence to support this practice.

Management of patients on antiplatelet or anticoagulant therapy is best conducted with local hemostatic methods, such as sutures and direct packing of surgical sites with gauze, resorbable gelatin sponge, oxidized cellulose, or microfibrillar collagen (Brennan et al., 2007), and in some cases it is necessary to use a surgical stent (Figure 6.1) to retain a dressing on a periodontal wound.

Figure 6.1 A surgical stent made with clear acrylic resin on a cast to cover the site of the planned surgical wound (shown in red). 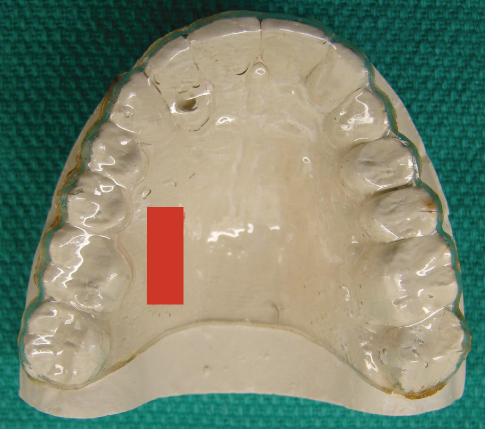 Systemic antibiotics will reduce gingival bleeding and the depth of periodontal pockets in healthy patients with moderate to severe periodontitis (Kornman et al., 1994). Consequently, frail patients can be treated similarly with a combination of systemic and/or locally applied antimicrobial tetracycline derivatives, such as minocycline hydrochloride (e.g., Arestin® [OraPharm Inc., Warminster, PA]/minocycline spheres, or Atridox® [Tolmar Inc., Fort Collins, CO]/doxycycline gel) about 2–3 weeks prior to scaling, root planing, or other surgery. They will reduce postscaling bleeding and infection, permit more efficient surgery, and shorten the length of the surgery. However, some antibiotics, in particular metronidazole, will alter warfarin metabolism and increase bleeding by increasing the international normalized ratio (INR). Therefore INR should be monitored more closely while the patient is taking metronidazole. If the patient is taking metronidazole concurrently with scaling or surgery, INR and possibly bleeding time should be determined before scaling and surgery to control and avoid dangerous postsurgical bleeds (Wood and Deeble, 1993). There is some evidence that posttreatment bleeding is not increased when patients are on antihemostatic medications (Napeñas et al., 2009), but there is also at least one report of a very severe postoperative bleed from a patient who was taking a low-dose ASA (Elad et al., 2008). To err on the side of caution though, it is not a good idea to cease anticoagulant treatment prior to invasive dental treatment, but it is always a good idea to consult with the patient’s physician in case severe bleeding becomes a problem.

About one in five people on calcium channel-blocking medications such as nifedipine or amlodipine for coronary artery spasm can get gingival hyperplasia, particularly elders with poor oral hygiene and severe gingivitis (Miranda et al., 2001; Eslami et al., 2004; Lafzi et al., 2006).

MANAGEMENT OF OTHER ORAL DISORDERS IN FRAIL PATIENTS WITH CVDs

CLINICAL MANAGEMENT OF THE FRAIL ELDERS WITH DIABETES

Diabetes is characterized by hyperglycemia due to an absolute or relative deficiency of insulin. It is categorized as type 1 or insulin dependent, which occurs at a young age, and type 2 or noninsulin dependent, which is much more prevalent and occurs typically in old age when insulin fails to promote the metabolic ingestion of glucose (Lalla and D’Ambrosio, 2001; Moore et al., 2003).

Typically, the management of type 2 diabetes combines diet, exercise, weight reduction, and medication, and dentists usually consult the patient’s physician for blood levels of glycated hemoglobin (HbA1c), which should be <7% if the sugar levels in the blood are under control (Mealey, 2008). However, only about one-third of type 2 diabetics attain an HbA1c of <7% (Koro et al., 2004), so sugar control is likely to be even poorer among frail elders.

In general, diabetic patients fair better in the morning when higher cortisol levels increase blood sugar (Hucklebridge et al., 1999). A serum assay of the fasting glucose level in the blood is possible (e.g., in a hospital-based practice, or if request by dentist that MD order such a test on the day of treatment) and all but emergency treatment should be postponed if the level is above 6 mmol/L (Alexander, 1999). Normally, antibiotic prophylaxis is unnecessary for diabetic patients unless emergency surgery is required when the glucose level is high (Alexander 1999; Tong and Rothwell, 2000).

Hypoglycemia during dental treatment is an additional concern with the frail patient who has diminished responses of glucagon, and epinephrine to hypoglycemia, particularly if cognitively impaired and unaware of their weakened condition (Meneilly et al., 1994; Chau and Edelman, 2001). Vasoconstrictors, such as epinephrine, and ASA are best avoided during treatment because of risky hyperglycemic effects (Gerich et al., 1976; Lalla & D’Ambrosio, 2001). If a glycemic episode, which typically mimics syncope, is suspected, dental treatment should be terminated and a fast-acting oral carbohydrate (e.g., orange juice) should be administered immediately (Lalla & D’Ambrosio, 2001).

Tags: Oral Healthcare and the Frail Elder A Clinical Perspective
Jan 5, 2015 | Posted by mrzezo in General Dentistry | Comments Off on 6 Management of periodontal and gingival diseases and other oral disorders in frail elders with cardiovascular disease or diabetes
Premium Wordpress Themes by UFO Themes
WordPress theme by UFO themes