On first consideration, saliva is a distinctly “uncool” fluid. As Mandel (1990) so eloquently pointed out, “saliva is not one of the popular bodily fluids. It lacks the drama of blood, the sincerity of sweat and the emotional appeal of tears.” However, as with so many other essentials, it is only when we do not have enough of it that we appreciate what it is that we have lost. In this chapter, we take the reader through an overview of the salivary system and the role of saliva before describing the measurement, occurrence, and consequences of dry mouth. Finally, we examine the practical aspects of dry mouth and its management in residential care facilities.

The parotid gland, which is the largest, is situated in front of the ear and behind the mandibular ramus. The parotid or Stenson’s duct produces serous secretions opposite the upper second molar tooth. The submandibular gland produces a mixture of mucous and serous secretions under the body of the mandible with its duct (Wharton’s duct) running across the floor of the mouth to open beneath the anterior part of the tongue. The sublingual gland, which is the smallest of the three major glands, produces mostly mucous secretions from small ducts (Bartholin’s ducts) on the floor of the mouth beneath the tongue (Whelton, 2004).

The minor salivary glands are located in the buccal and labial mucosa, the posterior palate, and the lateral border of the tongue to lubricate the mouth primarily with mucous secretions.

Unstimulated saliva is hypotonic; it becomes isotonic when secreted initially, but it becomes hypotonic as it flows through the ducts (Figure 4.1) (Aps and Martens, 2005).

Figure 4.1 Modification of glandular secretions in transit through the glandular ducts. 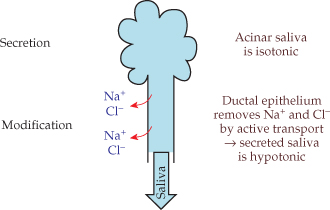 A key to understanding dry mouth is to understand the innervation of the salivary glands and the physiology of salivary flow. The autonomic nervous system plays an important role, and the glands have both sympathetic and parasympathetic nerve supplies. Salivation is mainly under parasympathetic control from the salivary nuclei situated in the pons and the medulla of the brainstem. However, sympathetic stimulation also causes salivation via adrenergic stimulation, but with characteristics different from saliva obtained from parasympathetic (cholinergic) stimulation. β-Adrenergic stimulation produces low volumes of highly viscous saliva with very high concentration of mucin, whereas α-adrenergic stimulation also produces low volumes of highly viscous saliva but with low concentration of mucin. Cholinergic stimulation results in a high volume of saliva with low concentrations of protein and mucin, so that it is not viscous (Aps and Martens, 2005). In theory, sustained β-adrenergic stimulation by β-adrenergic agonists such as bronchodilators used in asthma could lead to relatively small amounts of viscous saliva, which would dry the mouth even if the quantity or volume of saliva is undisturbed. Drugs with an anticholinergic effect can reduce the flow of saliva, especially after chronic exposure. The concept of “overall anticholinergic burden” (Chew et al., 2008), although unproven empirically, is useful, whereby the greater the dose of anticholinergic drug, the greater the likelihood and severity of a dry mouth in patients medicated for disorders of the gastrointestinal, genitourinary, or respiration, or for Parkinson’s disease or bradycardia.

Basic mechanical (touch) and chemical (taste) stimuli in the mouth also excite the salivary nuclei, as do higher-level stimulation and inhibition (Edgar et al., 2004), which is why anxiety can cause the mouth to feel dry, and thinking about good food can increase salivation.

THE ROLE OF SALIVA IN HEALTH AND DISEASE

Dentists are becoming more aware of the importance of saliva as they treat older patients who have medical problems and various medications that can dry the mouth as a side effect.

The complexity of saliva is best appreciated through its many functions in the oral and gastrointestinal environment (Table 4.1). It is essential for the preservation of a healthy oropharynx (Whelton, 2004). It helps swallowing, oral cleansing, speech, digestion, and taste (Turner and Ship, 2007). We can eat without saliva, but mealtimes may be difficult, uncomfortable, and embarrassing (Mandel, 1987). Saliva is stimulated reflexively by smell, taste, and mastication as it prepares and coalesces food into a bolus for digestion and swallowing (Turner and Ship, 2007). The high water content of the parotid secretions moistens the food, while mucins from the submandibular, sublingual, and minor glands facilitate ingestion (Table 4.1).

Saliva solubilizes many components of food and serves as a medium for the components to interact with receptors on taste cells (Mandel, 1987). It stimulates gustatory receptors on taste buds and delivers substances (“tastants”) that stimulate the sense of taste at the receptors (Turner and Ship, 2007). Therefore, reduced flow of saliva can distort the sensation of taste (dysgeusia). No specific constituent of saliva has been connected directly to dysgeusia, although specific electrolytes and minerals are necessary for a normal sensation of taste (Ship, 2004; Mese and Matsuo, 2007; Yoshinaka et al., 2007).

The mix of salivary constituents protects the soft and hard tissues of the mouth against mechanical, thermal, and chemical irritants (Mandel, 1987; Whelton, 2004), whereas the stimulated flow of saliva plays an important lubricating role when chewing with complete dentures (Ikebe et al., 2007). Swallowing occurs in oral, pharyngeal, and esophageal stages, and each stage requires lubrication of the mucosal tissues to ensure a safe and efficient swallow. Low salivary flow, in contrast, is associated with dysphagia, which can lead to aspiration pneumonia from gram-negative anaerobes that originated in the mouth (Loesche et al., 1995).

Salivary lubrication is attributed to strong layers of mucin glycoproteins that, together with proteases, protect the mucosa from drying and from penetration or ulceration by particles of sharp food, or even by infiltration by carcinogens. Epidermal growth factors in submandibular saliva help damaged mucosa to repair by reducing clotting time and accelerating contraction of the wound. Saliva contributes to lavage and debridement of wounds by reducing the aggregation and adherence of pathogens, and by direct antibacterial, antifungal, and antiviral activity (Mandel, 1987). The physical flow of saliva stimulated by muscular activity around the mouth, along with the secretory IgA system, interferes with the adherence of bacteria to teeth, mucosa, and dentures, while mucins and proteins (lysozyme, lactoferrin, and lactoperoxidase) can kill or disable bacteria (Tabak et al., 1982).

Salivary bicarbonate maintains a neutral pH in the mouth, neutralizes acidity from esophageal reflux, and regulates the pH of the biofilm on teeth. Other constituents, such as fluoride ions, increase the enamel’s resistance to caries.

Chronically reduced salivary output can lead to painful mucositis and candidiasis from Candida albicans and other fungi (Ship, 2004). The fungi present usually as pseudomembranous erythema that frequently extends extraorally at the corners of the mouth as “angular cheilitis” and occasionally produce a burning sensation of the tongue or other parts of the mouth. Oral candidiasis is opportunistic and can worsen with a weakened immune system.

WHAT IS DRY MOUTH?

The term “dry mouth” is a catchall phrase encompassing either or both the sensation of a dry mouth and the situation where the output of saliva is low (Cassolato and Turnbull, 2003). In this chapter, we are concerned with chronic dry mouth typically lasting 3 months or more (Last, 2001) rather than the more acute, transient condition associated with dehydration or fear.

DRY MOUTH AND QUALITY OF LIFE

A dry mouth can seriously affect quality of life in any age group through any or all of its consequences (Table 4.2). It is particularly difficult, for example, for people with salivary gland hypofunction (SGH) to eat dry food, such as biscuits or crackers, without liquids to help swallow the food. Taste disturbances are common when saliva is abnormal; consequently, patients with chronic SGH secondary to Sjögren’s syndrome or head and neck radiotherapy, for example, experience abnormal sensations of taste or gustation (Turner and Ship, 2007).

Dry mouth has two possible manifestations, which makes it particularly difficult to define and diagnose (Table 4.2). Xerostomia is the subjective feeling of a dry mouth, assessed only by directly questioning the patient (Fox et al., 1987), whereas SGH refers directly to abnormally low salivary flow when measured by sialometry (Navazesh, 1993). Moreover, the subjectivity of one rarely coincides with the measurement of the other, which complicates clinical assessments considerably (Thomson et al., 1999a). Different medications are associated with the two aspects; however, there is much that we do not understand about the effect of saliva on the sensation of a dry mouth, and this lack of concordance could be due partly to differences in the quality of saliva.

A dry mouth also contributes to halitosis, a burning sensation around the mouth and tongue, and an intolerance to acidic and spicy foods (Atkinson and Wu, 1994); such effects compromise nutritional status and quality of life. People with xerostomia, for example, tend to avoid crunchy or dry foods (such as vegetables or bread) and sticky foods (such as peanut butter) (Loesche et al., 1995), while denture-wearers without saliva are likely to have loose dentures due to inadequate peripheral seal, and sores from abrasive movements of the dentures on the mucosa.