10 Contexts of body image and social interactions among frail elders

Contexts of body image and social interactions among frail elders

Social relations are necessary for health and well-being (Berkman, 1995; Seeman et al., 1996; Bennett, 2005), and reduced social engagement is a threat to health that equates to smoking tobacco, high blood pressure, and reduced physical activity (House et al., 1988). Frail elders, probably more than most other groups, are at increased risk of becoming socially isolated as their physical and cognitive capacities decline, their accommodations change, and connections with family and friends severed (Havens and Hall, 2001). The chronic diseases of old age have a significantly negative impact on social interactions; however, the impact of oral health on social involvement has received very little attention from clinicians and researchers alike. We know that the social interactions of children, adolescents, and middle-aged adults are influenced by the appearance and health of their teeth, but it has been assumed widely that natural teeth are lost with advancing age, so that teeth are no longer a matter of much concern when old age leads to frailty and general disability. Consequently, the interrelationships between oral health and the social experiences of elders as they grow frail have all but been ignored.

Old age imposes multiple challenges on the mouth and on oral healthcare. Medications may reduce salivary flow, which increases the occurrences of caries, mucositis, and candidiasis (Turner and Ship, 2007). Physical and cognitive impairments interfere with personal hygiene, which heightens the risk of candidiasis, gingivitis, halitosis, periodontal disease, and to a lesser extent, caries, while impaired mobility limits access to oral healthcare. Collectively, these challenges have a very significant physical impact, causing pain and discomfort, upsetting nutrition, and exacerbating other diseases. But just as importantly, these challenges to oral health can disrupt body image, reduce social interactions, and diminish quality of life. This chapter will describe what we know about associations between conditions of the mouth and social interactions among elderly people as they grow frail. In addition, we will introduce the concept of body image as a possible influence on social interaction in old age, and consider how it too is influenced by the oral healthcare administered to frail elders.

Social isolation, typically defined as a physical separation from others, becomes more common as people grow older because of the social and physical realities of retirement, declining health, impaired mobility, and the death of friends and relatives (de Jong Gierveld and Havens, 2004). Barriers to social interaction are potentially very damaging because of the strong links between health and social engagement. Lack of social contact predisposes to depression, neglectful health practices, and increased susceptibility to physical and cognitive disabilities (House et al., 1988; Cacioppo and Hawkley, 2003). Likewise, there are many health-related conditions, for instance, hearing impairment, incontinence, and pain, that impede social interactions (Weinstein and Ventry, 1982; Fultz and Herzog, 2001; Sofaer-Bennett et al., 2007). It is not clear, therefore, whether social isolation causes disease or if disease causes social isolation (House et al., 1988). Either way, social activities help prevent disability, which, in turn, enables further activity. Similarly, exercise, hygiene, and a good diet influence personal appearance, and an attractive appearance fosters social contacts (Umberson, 1987).

Emotional isolation or loneliness in contrast to social isolation is a feeling of social inadequacy and involuntary exile (de Jong Gierveld et al., 1987). They are feelings occurring in both an emotional and a social context (Weiss, 1973). Death of a spouse or a close friend produces strong emotions of isolation, grief, and loneliness, and they occur, to a lesser extent, for many people on retirement or separation from familiar surroundings (Tomaka et al., 2006). Elders can feel very isolated as they grow frailer with deteriorating health, and especially if they live alone or in residential care away from familiar friends and family (Jongenelis et al., 2004; Jylha, 2004; Routasalo et al., 2006).

Loneliness and depression frequently go hand in hand, and together they double the likelihood of early death (Stek et al., 2005). Consequently, the ill health attributed to a lack of social relationships is probably due more directly to loneliness and depression than to social isolation alone (Pinquart and Sorensen, 2001; Wenger and Burholt, 2004; Tomaka et al., 2006). However, this is not clear since the relationship between social isolation, loneliness, and depression is a complicated interaction. Depression is often precipitated by loneliness, but social isolation and loneliness do not always accompany each other as evidenced by some elders who are socially isolated and not lonely, whereas others feel lonely even in the midst of a crowd (Wenger and Burholt, 2004). Apparently, it is the quality rather than the quantity of social contacts that matter, and social contacts among close friends and confidants are frequently more protective of health than contacts with relatives who frequently impose more emotional stress than comfort (Giles et al., 2005; Routasalo et al., 2006).

Oral health and disease influence social interactions within all age groups (Linn, 1966; Vallittu et al., 1996; Newton et al., 2003). Malformed or misaligned teeth (Helm et al., 1985; Kiyak, 2000; Coffield et al., 2005), cleft lips and palates (Noar, 1992), and teeth damaged by caries (Filstrup et al., 2003) can increase self-consciousness, disturb body image and personal relationships, and generally disrupt social interactions. Halitosis or bad breath, whether from dental and gingival diseases or from more distant gastrointestinal or pulmonary disorders, is particularly disturbing to social interactions both for people with the disorder and others confronted by it (MacEntee et al., 1997; McKeown, 2003; van den Broek et al., 2008). Anaerobic bacteria can degrade organic residue in the mouth to produce volatile sulfur compounds that smell very unpleasant (Tonzetich, 1977). However, there are people who believe that they have halitosis even in the absence of an organic cause (Murata et al., 2002; Yaegaki and Coil, 2000), and they too feel embarrassed, lack self-confidence, and restrict their social relationships.

There is little doubt that oral disease and impairment can have a very serious effect on how people of all ages interact.

Mrs. Claude is 85 years old and has been living in a residential care facility for 5 years. Her family arranged for a dental hygienist to clean her teeth every few months because she seemed unable to do this for herself, although she seemed cognitively alert and physically robust. The nurse attending to her needs explained to the dental hygienist that Mrs. Claude had not spoken to anyone for at least 2 years, and that she suspected a stroke and “the isolation of old age,” although there was no other evidence of cerebrovascular problems. The nurse commented on the smell of Mrs. Claude’s breath but thought little more about it because, as she explained, “most old people have smelly breath.” Apparently, Mrs. Claude had withdrew from most social encounters several months previously and communicated solely by nodding in response to questions.

The dental hygienist found that Mrs. Claude was very cooperative and appreciative of the treatment rendered but only through smiles and hand gestures—no words. There were deep layers of plaque and calculus on Mrs. Claude’s teeth (Figure 10.1).

(Photograph courtesy of Dr. B. Lamberts.) 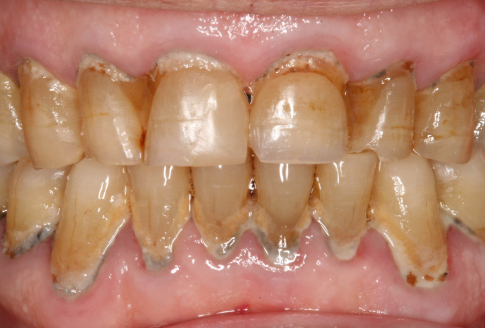 After the calculus was removed, she was encouraged to use a toothbrush every day despite the gingival bleeding. The nurse was instructed also on how to help Mrs. Claude’s hygiene; however, very little had improved when the dental hygienist returned 1 month later. The plaque layers had returned, the gingiva continued to bleed when brushed, and Mrs. Claude seemed distressed. The nurse explained that she tried to get Mrs. Claude to use the toothbrush but they both were reluctant to brush thoroughly because of the bleeding. The nurse explained further that she suspected a bleeding disorder and that a physician had ordered blood tests and results were expected the next day. The dental hygienist on telephoning the next day was advised that Mrs. Claude’s blood was normal. Consequently, she returned for another consultation with Mrs. Claude and her nurse, from which they agreed that a different approach to dental hygiene was needed. The nurse in Mrs. Claude’s presence received additional instructions on gingivitis and dental plaque, and they were reassured that the bleeding would cease when the gingiva were no longer irritated by the plaque, but that this would require several days or weeks of thorough plaque removal from the teeth.

The dental hygienist returned 1 week later to find Mrs. Claude in the midst of a conversation with several other residents. The nurse explained enthusiastically that Mrs. Claude diligently cleaned her own teeth three times daily since the previous consultation (Figure 10.2). When Mrs. Claude saw the dental hygienist, she exclaimed, “My breath doesn’t smell anymore.”

Figure 10.2 Gingival and periodontal health after removing plaque and calculus.

(Photograph courtesy of Dr. B. Lamberts.) 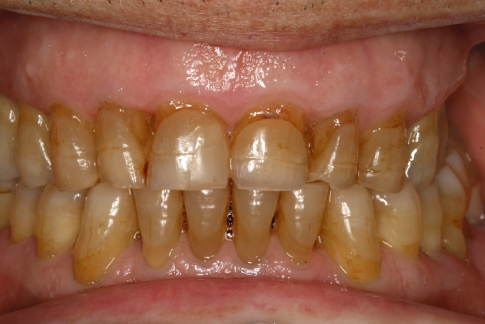 Further discussions with staff and family revealed that over the course of her life, Mrs. Claude />