Dysphagia is a condition in which there is difficulty swallowing (Logemann, 1998). It occurs in less than 10% of the general population, and in at least half of the elderly population in long-term care facilities (Achem and Devault, 2005). Indeed, most people who are frail have difficulties at mealtimes not only because of dysphagia but also because of postural difficulties, defective hand-to-mouth coordination, cognitive–behavioral problems, and defective dentures (Steele et al., 1997). The aims of this chapter are to describe how oral ill health and dysphagia are associated with aspiration pneumonia, and explain how interdisciplinary and patient-centered care can sustain oral health and prevent aspiration pneumonia.

The mouth is a portal through which air passes with oxygen to the lungs and food and drink pass with sustenance and pleasure to the stomach. However, the mouth can also harbor great distress when bacterial and viral infections upset general health and comfort, and inhibit our ability to thrive, especially if we are frail (MacEntee et al., 1997). Bacteria proliferate in food debris that accumulates in the mouth when oral hygiene is neglected. They infect the biofilm of the oral mucosa, gingiva, periodontium, and teeth to precipitate mucositis, gingivitis, periodontitis, and caries. However, many of these bacteria have been isolated also from the lungs with pneumonia, which leads to an assumption that accumulations of oral bacteria are significant risk factors for pneumonia (Mojon and Bourbeau, 2003; Sumi et al., 2006; Yoon and Steele, 2007; Abe et al., 2008; Weed, 2009). The risk is magnified even further when an elderly person has dysphagia and the laryngeal valve is defective. Dentists, dental hygienists, and other healthcare professionals who are aware of dysphagia can help reduce the risks associated with this disorder by managing the daily routines of oral hygiene and by maintaining the dentition as frailty increases.

We rarely think about swallowing until something goes wrong, and there is an unsettling feeling that something “went down the wrong way.” Usually, when this happens, we cough and retch until the misdirected food or drink is retrieved from the airway. It can be transient from postsurgical weakness or sedation, or persistent from degenerative disorders—such as Parkinson’s disease, stroke, advanced dementia, or kyphotic curves from osteoporosis in the spine—all disorders associated with frailty and a weakening of one or more of the 26 muscle groups involved in swallowing (Buettner et al., 2001). Consequently, in an effort to avoid the distress of dysphagia, the risk of dehydration and malnutrition increases as control over swallowing weakens.

Swallowing is a four-stage process from initial placement of food in the mouth to the entry of the food into the stomach (Ertekin and Aydogdu, 2003; Paik, 2008). Difficulties at each stage can shunt food, fluid, and saliva into the trachea rather than the esophagus, and if the mouth is infected with excessive numbers of pathogenic bacteria, the risk for aspiration pneumonia is high (Shay et al., 2005; Awano et al., 2008).

People who have difficulty swallowing tend to decrease their consumption of food and drink. Occasionally, they will change the texture and consistency of food by overcooking or liquefying it, but mashed or pureed foods looks unappetizing and unpleasant.

Receiving and swallowing food and drink is easiest when the trunk of the body upright, in midline position, and the head and chin slightly flexed downward (Trombly and Radomski, 2002). An appropriate posture to straighten the oesophagus, preferably seated at a table (Figure 7.1a) or propped up in bed (Figure 7.1b) will ease the passage of food and drink into the esophagus and the stomach. 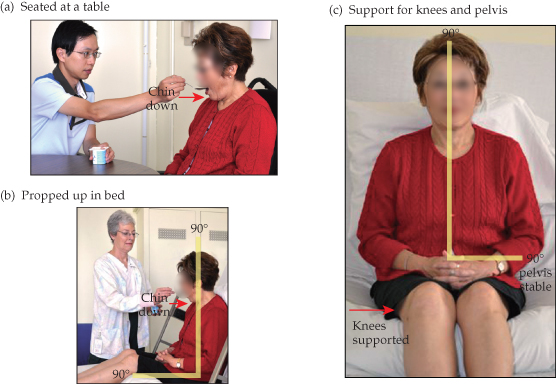 This posture is easily obtained by sitting upright with feet on the floor or on the foot pedals of a wheelchair, and arms on the arm rests. Similarly, eating and swallowing is easier in bed when the back and sides are supported by pillows or by adjusting the bed to produce the same comfortable orientation of the head and neck to the rest of the body. A roll placed under the knees helps also to remain stabile in this flexed position (Figure 7.1c).

Elders with neuromusculoskeletal deficiencies from a stroke or other disorders that cause difficulty with upright posture frequently require special supports or positioning devices to achieve and maintain head and neck alignment (Paik, 2008). The chin, when preparing to swallow, can be lowered in the “chin down” position to allow food to move down the throat while protecting the airway. Alternatively, retraction of the mandible in the “chin tuck” position reduces the space between the tongue and the posterior wall of the pharynx, which increases pressure to propel the food bolus through pharynx past a narrowed entrance to the airway. Either postural support should remain in place for at least 30 min, and preferably 2 h, after the meal to reduce the possibility of gastroesophageal reflux and aspiration (Wolf and Glass, 1992).

The optimal posture of the head and neck for oral hygiene is the same as for swallowing to prevent aspiration of water or toothpaste. Special toothbrushes (e.g., Plak-Vac®, Trademark Medical, St. Louis, MO) or other suction devices also help to reduce the possibility of aspirating fluids into the airway.

A water spray or moist towel will ease the discomfort of dry lips and a dry mouth while food that looks and smells appealingly will serve as a stimulant to the appetite and to the flow of saliva. The natural teeth and dentures along with the tongue, gingival, and all of the oral mucosa should be brushed frequently—preferably twice daily—to remove microbial plaque. This will lessen the numbers of bacteria and the taste of stale food, and it will go a long way toward reducing the risk of aspirating bacteria into the airway and lungs. Loose dentures complicate swallowing even further, so if necessary, an adhesive powder or cream will help to hold a denture in place (Grasso, 2004). There are no serious side effects to denture adhesives other than the residue that is difficult to clean off the dentures and supporting mucosa.

When food or liquid is placed in the mouth, the lips and tongue move it onto the occlusal tooth surfaces for chewing before it is propelled to the pharynx. The lips should form a good seal to keep the food and liquid in the mouth. Loose and unstable dentures or abnormally protruding teeth interfere with the lips, and can cause drooling or dribbling. It is important to know that drinking through a straw poses a difficult challenge for incompetent lips; therefore, it best avoided by people who cannot form a good lip seal around the straw or who cannot coordinate the sucking and swallowing action. Similarly, the muscles of the tongue and pharynx should form a good seal posteriorly to allow breathing through the nose, larynx, and pharynx when chewing, and to prevent fluids dribbling down the throat before the swallowing begins.

It is difficult to swallow solid foods that have not been chewed adequately and moistened or broken down by saliva. Fatty sauces will help lubricate food, whereas broths and other low-fat sauces only moisten the food. Sticky or thick liquids, such as puddings and milkshakes, when compared with thin liquids are easier to contain in the mouth and to swallow, although some people find them more difficult to swallow. Nonetheless, liquids thickened to various consistencies with nectar, honey, or pudding gels should prevent aspiration and ease the swallow. The sensory information emitted by the muscles, jaw joints, and mucosa of the mouth and lips prevent biting, enhance enjoyment of the texture and temperature of food, and generally provide the guidance needed to eat comfortably and safely.

Frailty is accompanied by weakened and uncoordinated muscles so that eating becomes difficult and inefficient while the preparatory phase of swallowing is elongated. Consequently, people as they grow frail will increase the number of chewing cycles to compensate for the chewing inefficiency (Mioche et al., 2004). Their preference is for soft foods, especially when their teeth are defective.

The oral phase of swallowing occurs when the food is chewed, mixed with saliva, and ready to be swallowed. The moistened bolus of food is moved to the back of the mouth as the tongue rolls backward, forming a “chute” into the throat. Again, there are multiple muscles involved in this movement, and weakness in any of them can disturb the action. If the lips are weak, the soft foods and liquids can dribble or drool when food is not propelled backwards. Similarly, sticky food may stick to the roof of the mouth if the tongue is weak. The cheek muscles help keep the bolus on the teeth and out of the lateral vestibule, while the soft palate lowers during all of this activity to allow nasal breathing.

The oral phase of swallowing ends by triggering the pharyngeal phase, which often slows down in old age, and liquid trickles into the throat before the pharyngeal swallow is triggered (Marik and Kaplan, 2003).

Food or liquid is moved through the pharynx to the esophagus during this third phase. The larynx and hyoid bone move upward and forward to allow the epiglottis to close off the airway and to open the cricopharyngeal sphincter at the top of the esophagus. The vocal folds close to prevent anything entering the trachea. Weakness of muscles, typically from respiratory diseases or general fatigue, prevents complete closure of the airway and allows leakage or aspiration of fluids (and bacteria) into the lungs. It is also very distressing when the normal rhythm of breathing is delayed because of a prolonged swallow (Logemann, 1998; Vaiman et al., 2005).

When the food enters the esophagus, the walls contract in a reflexive movement of peristalsis to push the food down to the stomach. The muscles in the walls along with the sphincter muscle at the top of the stomach keep the food and gastric fluids in the stomach. However, with frailty, the peristalsis lessens, muscles weaken, and gastric acid can seep into the esophagus and upward to the pharynx and larynx (Achem and Devault, 2005). Consequently, the mucosa may become inflamed and swollen, which impedes swallowing even further.

There are a number of clinical signs of dysphagia, but none definitely indicates the problem because they are associated also with other problems. However, the “red alerts” are drooling, choking, and coughing after drinking fluids or eating, along with dental plaque and residues of food around the mouth (Table 7.1).

Table 7.1 Clinical alerts to dysphagia and risk for aspiration.