This chapter will address (1) how the definitions of periodontal conditions apply to frail people; (2) the available evidence on the prevalence of gingivitis and periodontitis in older populations; (3) social and perceptual factors influencing periodontal health in frail elders; (4) frailty and periodontal infection; and (5) periodontal treatments for frail patients.

Mr. Erikson is 76 years old with a medical record of arthritis, phytoin-controlled epilepsy, and a heart attack at age 74. He is overweight, uses a wheelchair to move around, and resides in a long-term care facility. He smoked tobacco for more than 30 years but stopped after the heart attack. Now he takes 100 mg/day of aspirin.

Clinical examination of his mouth 3 years ago found 24 teeth. He had previously lost four teeth—two in a car accident and two from failed endodontic treatments. He had buccal or interproximal gingival recession at most teeth (Figure 8.1). Several teeth were restored with large intracoronal restorations, and others had prosthetic crowns with exposed margins. His oral hygiene was good. A periodontal examination revealed that 18 teeth had periodontal pockets ≥6 mm, while 12 had pockets >7 mm, and three teeth were noticeably (Class II) mobile (Table 8.1).

Table 8.1 Classification of mobility (Mo) and depth (in millimeters) of periodontal pockets (PP) recorded for each tooth. 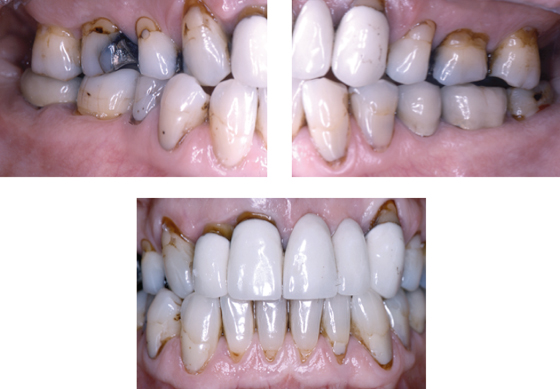 Intraoral radiographs show advanced alveolar bone loss at most teeth with a distance between the CEJ to bone of ≥4 mm at >40% of sites, and osteitis at the root apices of teeth #16 and #46 (Figure 8.2).

Mr. Erikson’s dentist, Dr. Smith concluded that the upper anterior teeth could not be saved and also that the lower right first and second molars should be extracted and implants placed to restore function. In addition scaling and root planing would be performed.

The goal of periodontal therapy is to prevent and manage periodontal disease and to preserve a functional dentition for life (Wennström, 1998). Most of our knowledge about periodontal interventions relate to young and relatively healthy adults, and we know that the periodontium can remain reasonably stable throughout life. However, the assumption that people with little or no signs of periodontal disease in midlife will remain immune to it in old age is questionable. Successful periodontal therapy depends on good oral hygiene, which is not a common finding among frail elders (Kay and Locker 1996; Söderpalm et al., 2006). Consequently, two fundamental questions arise: (1) does periodontal debridement control periodontitis for frail elders, and (2) does periodontitis with associated bacteremia constitute a serious risk to the general health of frail elders?

The social and physical changes of natural aging disturb the periodontium as they disturb other organs, even in people who are seemingly robust. Altered immunity, for example, changes gingival cells (Zavala and Cavicchia, 2006), which can lead to gingival recession (De Rossi and Slaughter, 2007). Moreover, osteoporosis and deep (≥5 mm) periodontal pockets increase the risk of further periodontal bone loss in people of Caucasian or African descent as they age (Swoboda et al., 2008). Similarly, genes, lifestyle, healthcare, and the other physical insults of life take their toll on the periodontium (Petersen and Yamamoto, 2005).

The periodontium is constantly exposed to microbiota that induce inflammation. Loss of teeth reduces the bacterial burden and inflammation in the mouth, which is an association that prompted Benjamin Rush in the 1820s to propose extracting all natural teeth to cure rheumatoid arthritis. Consequently, until the mid-20th century, it was widely believed that extraction of teeth would reduce the risk of focal infection. This belief resurfaced recently to reduce counts of serum nonspecific markers of inflammation (Taylor et al., 2006; Ellis et al., 2007). Indeed, this might be appropriate treatment for people with severe periodontitis who are medically compromised because information on the prevention and treatment of periodontitis in older people is limited (Renvert and Persson, 2002, 2004). Nonetheless, the consequences of tooth loss can also be very unhealthy, and inflammation in the jaws can be a serious complication of oral implants (Renvert et al., 2008). In many instances, it may be easier for frail elders with or without assistance to maintain reasonable oral hygiene around teeth than around implants, especially when recovering from a seriously debilitating illness (Figure 8.3).

Figure 8.3 Mandibular endosseous implants in a patient 4 weeks after a heart attack.

DEFINITIONS OF GINGIVITIS AND PERIODONTITIS

Susceptibility to periodontal disease is highly variable and depends on host responses to pathogens (Colonna-Romano et al., 2008; Suvas, 2008). A decline in immune responses, for example, occurs with increased serum levels of immunoglobulin, cytokine, natural killer, and memory T lymphocytes in old age (Percival et al., 1996). Gingivitis, in effect, is a cytokine-related immune response to prevent bacteremia within gingival cells. Periodontitis might be the effects of a humoral (antigen-antibody) driven immune response that continues until the infection is either resolved or teeth are exfoliated or extracted. Moreover, the stress of chronic exposure to bacterial antigens compromises the immune system and overburdens the immune system (Colonna-Romano et al., 2008).

The clinical signs of gingival inflammation are often inconsistent with the quantity of plaque on the teeth of older people, which suggests an inefficient response of the host. Gingival recession, for example, occurs typically at the interproximal and mid-buccal surfaces of teeth (Figure 8.1). Similarly, regular intakes of aspirin, which is a common medication for arthritis and heart problems, will increase tendencies for gingival bleeding (Royzman et al., 2004; Kim et al., 2007).

Good nutrition also helps control periodontal inflammation (Jepsen and Kuchel, 2006; Irish et al., 2008; Baumgartner et al., 2009). Flavonoids and omega-3 are examples of immune boosters that have a significant impact on inflammatory responses to infection, and that educe colonization of the mouth by virulent bacteria (Brüünsgaard and Pedersen, 2003).

In summary, periodontal therapy for frail elders should be adjusted for medical conditions, access to care, and the propensity to self-care. Teeth that are infected beyond control should be extracted with the immediate objective of reducing the burden of infection and stabilizing the level of frailty as quickly as possible (Gill et al., 2002).

PREVALENCE OF PERIODONTITIS AND GINGIVITIS IN FRAIL POPULATIONS

The belief that periodontitis affects entire populations and that the disease progresses with age changed in the 1980s. In fact, severe periodontitis occurs in only a minority (∼15%–20%) of the general population in western countries, and it does so independently of age (Borrell et al., 2005; Dye et al., 2007; Hugoson et al., 2008). Partly influenced by geographic and socioeconomic conditions, the prevalence ranges from 27% to 73% of elderly populations (Borges-Yáñez et al., 2006), and there is little doubt that the widely ranging prevalence figures are due to different ways of measuring the disease. Nonetheless, there is an emerging consensus that periodontitis occurs in about half of the relatively robust elderly populations in northern Europe (Holm-Pedersen et al., 2006; Krustrup and Petersen, 2006; Holtfreter et al., 2010). Gingivitis, in contrast, is much more prevalent among frail elders, and in some populations, almost all of the elderly residents in long-term care have severely inflamed gingiva (MacEntee, 2005). There are no reliable data on the prevalence of periodontitis among elderly people who are frail.

Dr. Smith did not feel that it was necessary to consult with Mr. Erikson’s physicians because he felt sufficiently experienced to manage any emergencies that might arise during treatment.

After further discussions, Mr. Erikson selected implant treatment and conservative nonsurgical periodontal therapy. Four teeth (#11, #25, #26, #46) were extracted, and implants were placed after 6 months at the sites for teeth #12, #22, #26, #46, and #47. After an additional 6 months, the dentist replaced the old intracaronal restorations with resin composite fillings, and attached single crowns to the posterior (#26, #46, #47) implants, along with a fixed prosthesis with pontics to the implants in the anterior maxilla (Figure 8.4).

Figure 8.4 Radiographs of Mr. Erikson’s teeth after treatment with implants.

Two years later, eight interproximal sites had pocket depths ≥5 mm. A Class III furcation was probed at the lower left first molar, and a Class II furcation at the second molar. Bleeding on probing was seen around three of the implants that had 4-mm probing depths.

Socioeconomic factors have been identified as possible risks to elders with periodontitis (Borrell et al., 2008). Retirement with little or no dental insurance, for example, can prevent older people from accessing periodontal care, whereas wholesome nutrition can reduce periodontal inflammation (Jenzsch et al., 2008). However, nutritious foods can be expensive, especially for people on low fixed pensions. There are many foods with anti-inflammatory properties, although methods of production and preparation have a significant influence on their nutritional properties (Table 8.2).

a Properties can vary by processing—wild fish and wild berries are preferable.

Honey is rich in flavonoids, for instance, whereas diets high in refined sugars are associated with inflammation, obesity, and chronic disease. Therefore, advice on reduction of sugar consumption is important not only to reduce the risk of caries. Moreover, the link between obesity and inflammation is illustrated further by the increased plasma levels of several proinflammatory markers including cytokines and acute phase proteins such as C-reactive protein (CRP) in obese individuals (Trayhurn and Wood, 2005; Florez et al., 2006).

Risk of periodontitis from tobacco and alcohol

Information on alcohol consumption and periodontitis in elders is limited and contradictory. Some evidence associates excessive alcohol with damage to the gingival attachment (Tezal et al., 2004), whereas other information suggests that there is no causal link (Torrungruang et al., 2005).

Cognitive disability or inadequacies, possibly influenced by social status and education early in life, influence periodontal health (Persson et al., 2004). In general, people understand how previous activities can increase future risks for periodontal disease (Suominen-Taipale et al., 2009; Ekanyaki and Perera, 2005; Mariño et al., 2008; Stewart et al., 2008), but they do not always agree with the advice offered by dentists (Locker and Gibson, 2005). Depression is associated with periodontitis and high concentrations of interleukin-6 in crevicular fluid from the gingiva (Johannsen et al., 2007) and with tooth loss (Persson et al., 2003). Unfortunately, depression can lead also to a general disinterest in personal hygiene, including oral hygiene. Indeed, these physiological and behavioral responses to depression might well explain why elderly people who are single rather than living with a partner are at increased risk for periodontitis (Persson et al., 2004; Airila-Månsson et al., 2007). Elders often have to change their living conditions as they grow frailer, especially when their spouse dies. Consequently, the increased stress can affect the immune functions with an accompanying increase in the severity of chronic diseases (De Martinis et al., 2007; Leng et al., 2007). Depression also predisposes to “quick fix” treatments, such as tooth extraction, as a solution to periodontal disease, particularly when loose teeth are bothersome and compound the feelings of depression (Needleman et al., 2004). Th/>