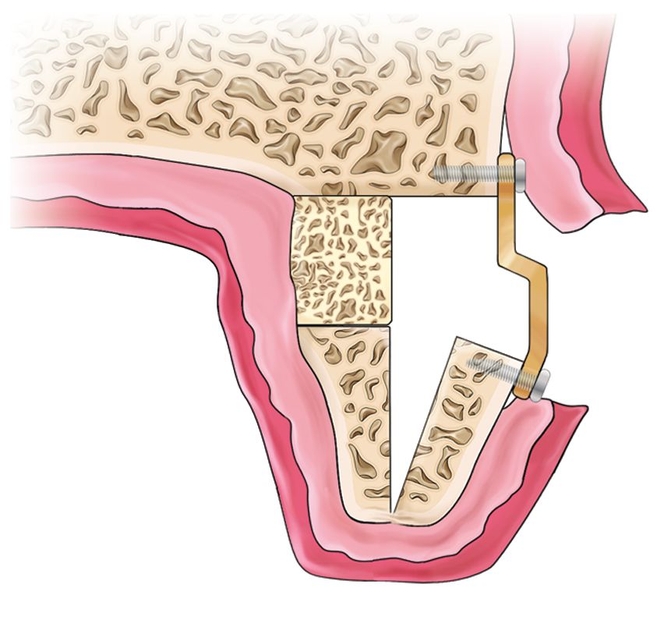 The true way to gain much, is never to desire to gain too much.

The alveolar interpositional bone graft, the so-called sandwich osteotomy, can be modified so that it can be used not only to gain vertical height but also to increase alveolar width.1–3 The crestally elevated osteotomy segment can be split coronally from the endosteal access wound, creating two osteoperiosteal flaps, a facial plate and a lingual plate, that, when spread apart and grafted interpositionally, increase the alveolar bone mass both vertically and horizontally. In contrast to the island osteoperiosteal flap, the internal alveolar split bone graft allows both the palatal and facial plates to be advanced vertically to the alveolar plane. So this intra-alveolar or internal alveolar split graft is largely a treatment for a vertical defect that also has a horizontal component 4,5 (also see chapter 7). 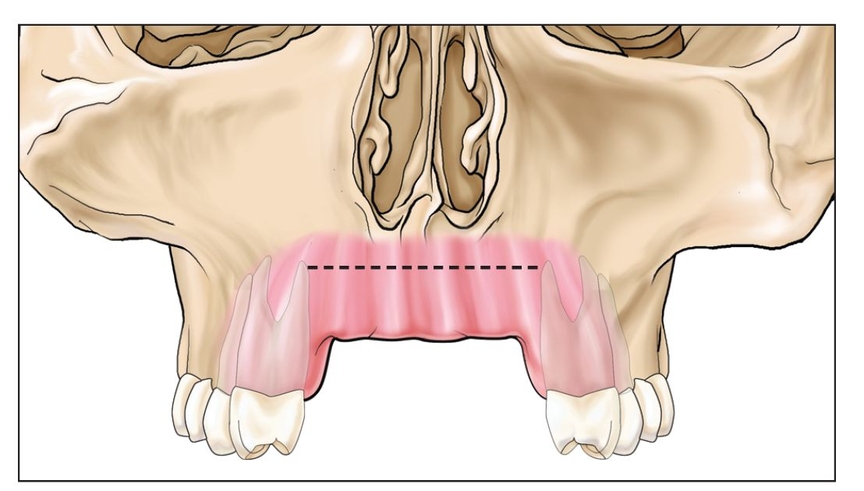 Fig 8-1a A maxillary anterior site with loss of vertical bone is approached with an incision (dotted line) made high in the vestibule. 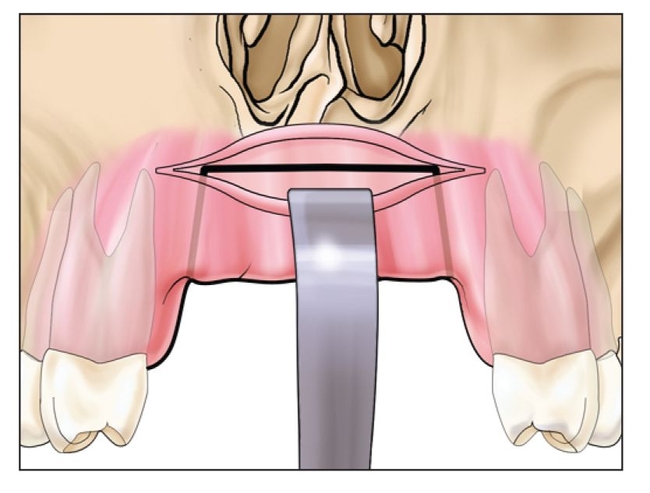 Fig 8-1b The horizontal cut of the sandwich osteotomy is made a few millimeters below the nasal floor, and vertical cuts are made to spare bone at the adjacent teeth. 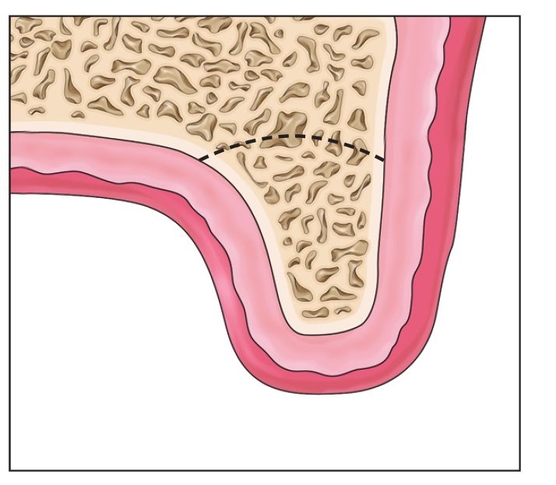 Fig 8-1c The horizontal osteotomy extends through the palatal plate. The saw blade is curved so that the cut is not angled high in the vault.

The indication for this technique is an alveolus that is deficient 3 to 5 mm vertically and 3 to 5 mm horizontally; however, the primary application of this procedure is to gain vertical height. This is one procedure that is easier to perform in the mandible than the maxilla.

The residual alveolar width must be 4 to 6 mm so that enough bone is available to perform the splitting osteotomy. The extent to which the split can be widened must be gauged by the proximity of the edge of the expanded facial plate to the vestibular wound. If the expansion is greater than 3 or 4 mm, the risk for protrusion of the bony edge through the vestibular wound margin usually increases. In such cases, a modest expansion of 3 or 4 mm should be considered instead of 5 mm or more of alveolar widening.

The surgical technique is the same as for a sandwich osteotomy, in that a horizontal incision that extends the length of the edentulous defect is made high in the vestibule with minimal reflection crestally (Fig 8-1a).1 The soft tissue wound margin should be kept away from the horizontal osteotomy if possible. If the procedure is in the anterior maxilla, where it is often indicated, the horizontal osteotomy cut must be made 2 to 3 mm below the nasal aperture to ensure that the nasal fossa is not violated 6 (Fig 8-1b).

The horizontal cut penetrates completely through the palatal plate, as determined tactilely with a finger placed in the palate during the osteotomy cutting procedure7 (Fig 8-1c). Vertical cuts are then made, with minimal flap reflection, about 2 mm from the adjacent tooth roots.8 These cuts, which connect to the horizontal cut, should flare about 10 degrees to allow the segment a “path of draw” as it is moved crestally9 (Fig 8-1d). These cuts are best made with an oscillating saw. If piezosurgery is used, additional cooling irrigation is required to avoid heating of the bone, because the piezosurgery insert is not adequately cooled when used at depth.10 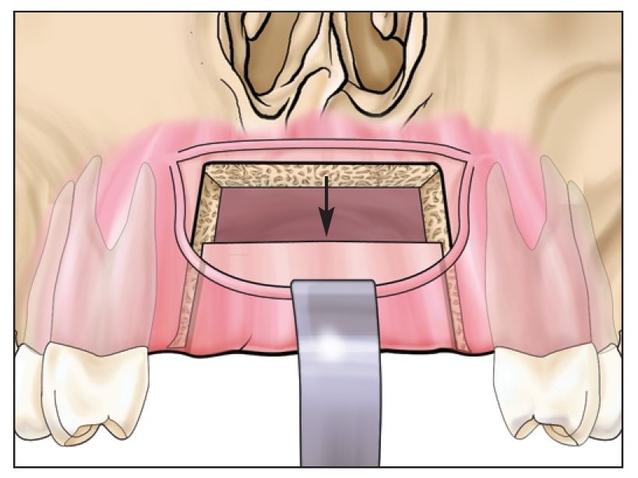 Fig 8-1d The segment is then displaced vertically several millimeters if possible. 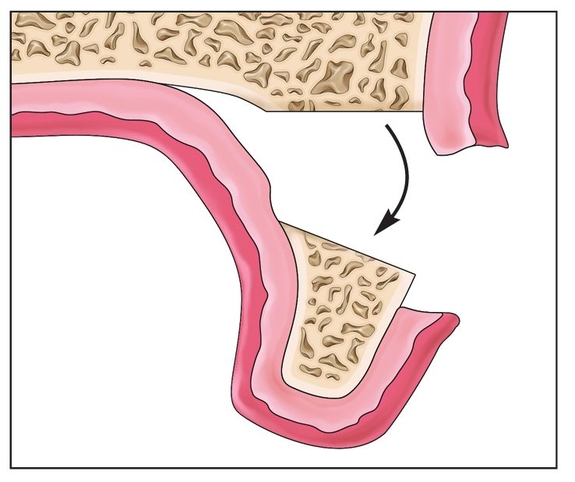 Fig 8-1e The alveolus is elevated to the alveolar plane, if possible. This movement will result in palatal deflection of the segment. 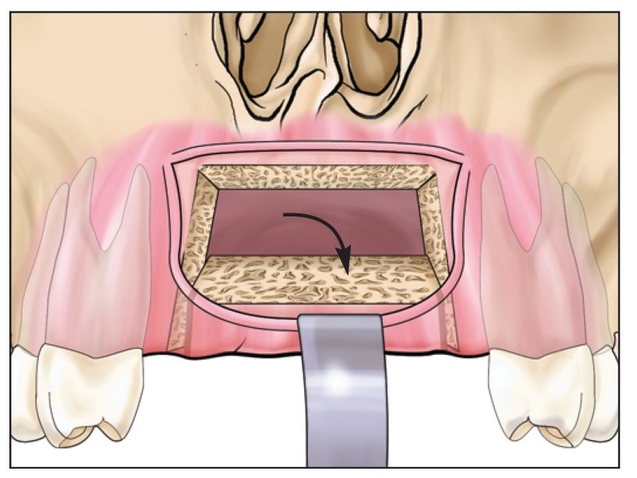 Fig 8-1f The segment is flexed slightly so that the internal osteotomy surface is exposed. 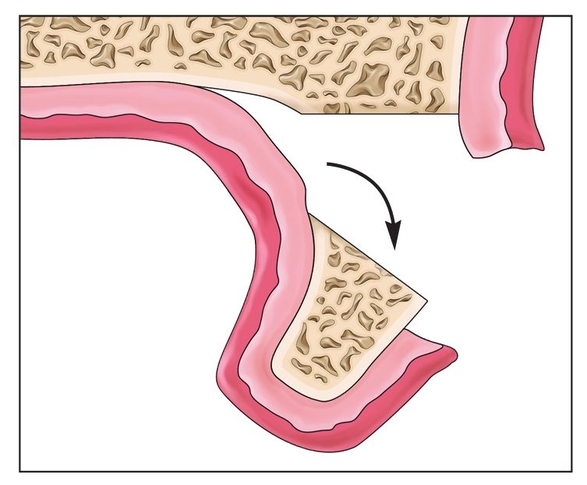 Fig 8-1g The segment should be flexed gently to prevent disruption of the palatal mucosal blood supply.

The segment is freed with an osteotome and typically elevated about 5 mm11 (Fig 8-1e). At this point in a conventional sandwich osteotomy, bone grafting would be performed; however, in the internal alveolar split bone graft variation, the elevated segment is flexed slightly to display the internal aspect of the osteotomy segment (Fig 8-1f). The segment should be flexed carefully so that the bone flap is not inadvertently stripped from its periosteum (Fig 8-1g). If the segment is at least 4 mm wide, a piezoelectric knife is used, with a very light touch and under copious irrigation, to cut the segment from the endosteal surface to the crest; a sweeping motion is used to divide it coronally into two equal halves, facial and lingual 3 (Fig 8-1h). The elevated segment is then split with an osteotome or blunt hand instrument (Fig 8-1i), creating facial and palatal osteoperiosteal flaps that maintain their mucoperiosteal attachment. Separation of these two plates widens the alveolus substantially (4 mm or more), but the segment rotates from the crest, where width expansion is minimal.

Bone plating and interpositional grafting follow. Usually, the palatal plate is best elevated to the desired vertical height by placement of a small block bone graft wedged deep in the wound on the palatal side12 (Fig 8-1j). A 3- or 4-mm elevation is optimal on the palatal side because the mucosa does not stretch. This establishes the vertical height of the palatal plate. The facial plate, which remains mobile, is then fixed with a titanium bone plate that is applied to establish the desired alveolar width4 (Fig 8-1k). An interpositional graft can be wedged between the two plates to help establish the desired width.11 If recombinant human bone morphogenetic protein 2 (rhBMP-2) is used on a collagen sponge, as opposed to particulate material, the fixation plate must establish the alveolar width because it is secured to basal bone.13 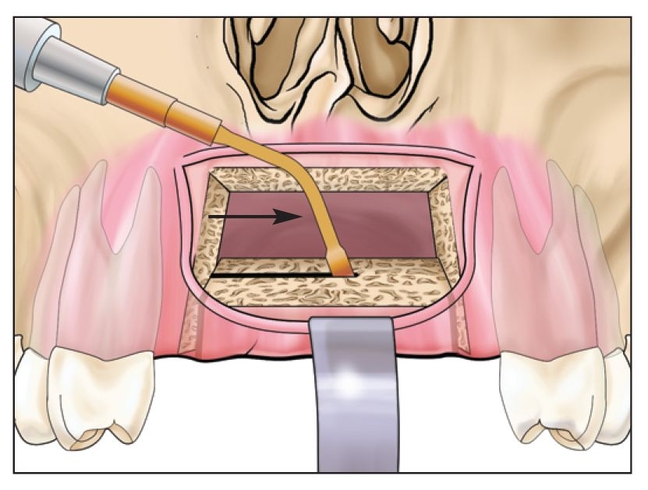 Fig 8-1h A piezoelectric knife is used, with additional copious irrigation, to split the segment. 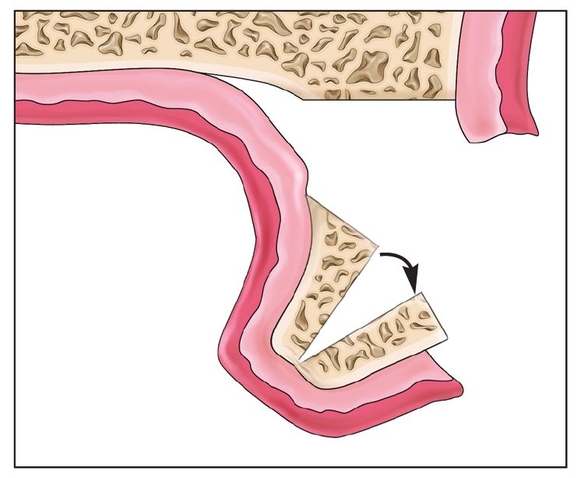 Fig 8-1i The segment widens (arrow) the alveolus at the base but pivots at the crest, where widening is minimal. 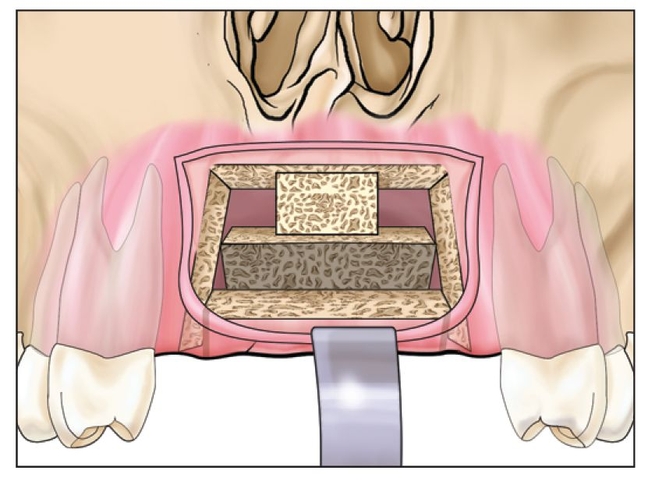 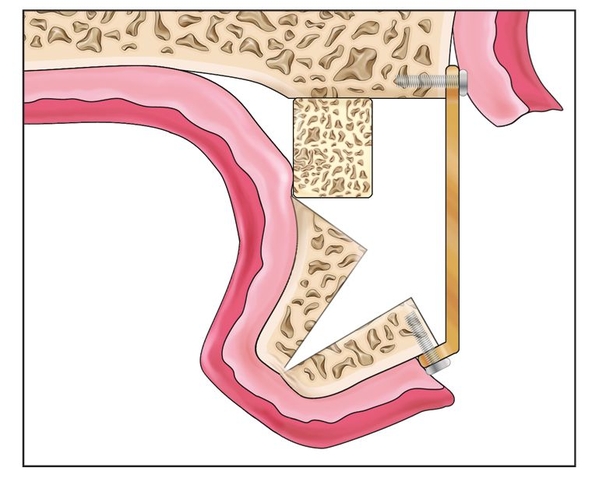 Fig 8-1k A titanium bone plate is used to establish the vertical and horizontal positions of the facial plate.

Fig 8-1l The palatal deflection of the entire alveolar complex can be counteracted by careful facial torquing of the titanium bone plate. 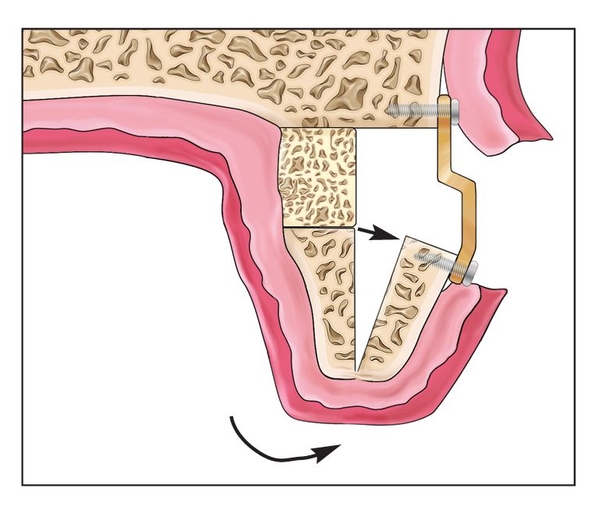 At this point, the fixed alveolar complex is often deflected palatally by a few millimeters.4 The secured titanium fixation device is used to carefully torque the alveolar segment facially a few millimeters into alveolar alignment4 (Fig 8-1l). Care should be taken not to dislodge the screw fixation from the facial plate during this procedure. There should be no separate movement of the segments. 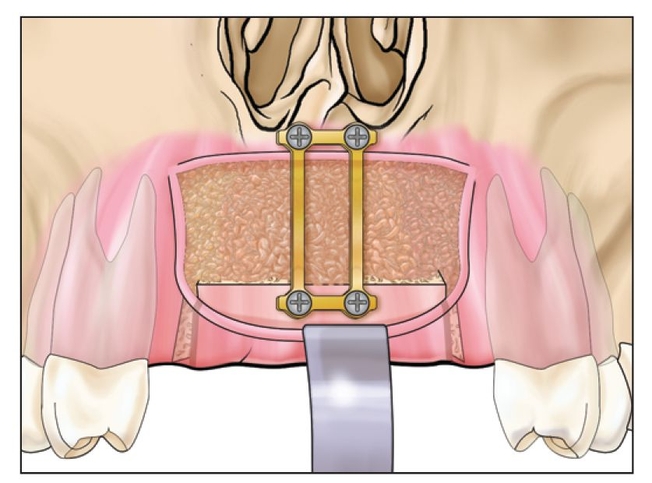 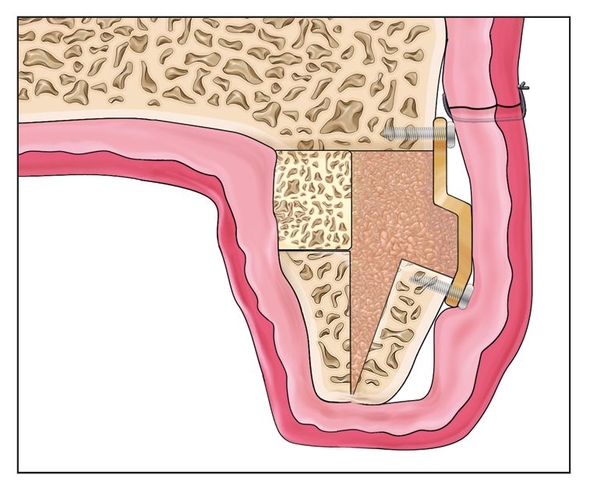 Fig 8-1n The internal alveolar split is grafted to help establish an increase in alveolar width. 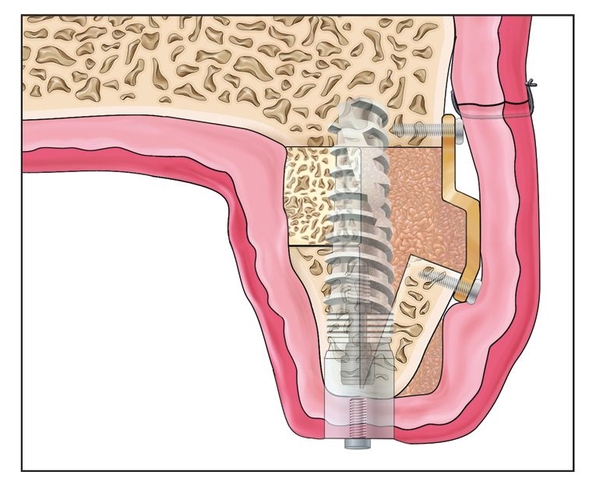 Fig 8-1o Four months after the osteotomy, the fixation plate is removed and implants are placed. Minor grafting may be required at the alveolar crest. 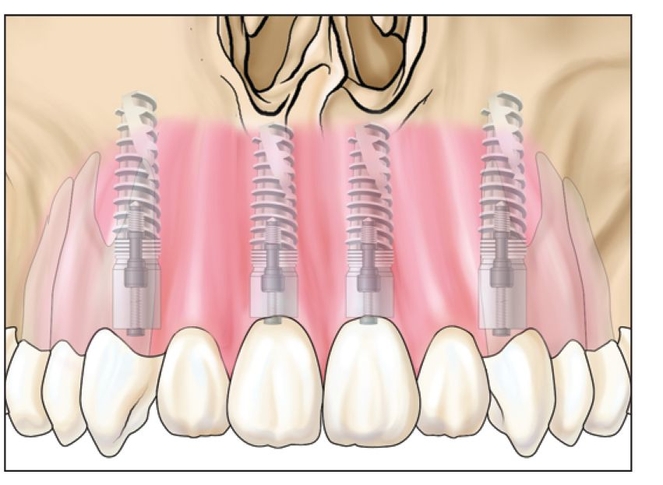 Particulate interpositional graft material or rhBMP-2 is inserted in the defect, and the vestibular wound is closed primarily (Figs 8-1m and 8-1n). The sharp bony edge and bone plate must be well covered with soft tissue. 14 They may cause dehiscence and protrude through the wound. If the mucosa is very thin, it may be better not to try to gain too much width because even an increase of 2 or 3 mm is often significant.

Implants are placed 4 months after the osteotomy, in conjunction with fixation removal (Fig 8-1o). An open flap approach is used to allow bone grafting of the crestal areas at that time.15 The final restoration proceeds 4 months after implant placement (Fig 8-1p).

A 36-year-old woman had traumatically lost her maxillary right incisors, canine, and premolars, along with much of the facial plate. Three years after the injury, one area had a vertical defect of 7 mm and a horizontal defect of greater than 5 mm, but most areas were 3 to 5 mm deficient vertically and 3 or 4 mm deficient horizontally (Figs 8-2a and 8-2b).

Figs 8-2a and 8-2b (a) A 36-year-old woman traumatically lost her teeth from the right second premolar to the right central incisor. (b) Trauma has resulted in a vertical defect of 7 mm and a horizontal defect of greater than 5 mm. 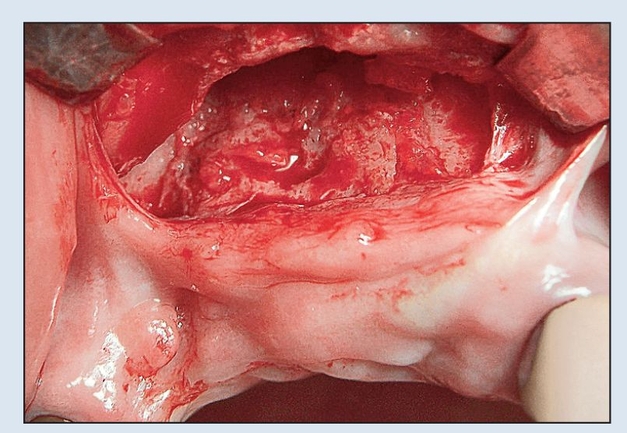 Fig 8-2c A vestibular incision is used to expose the osteotomy site, which includes a sinus elevation posteriorly. 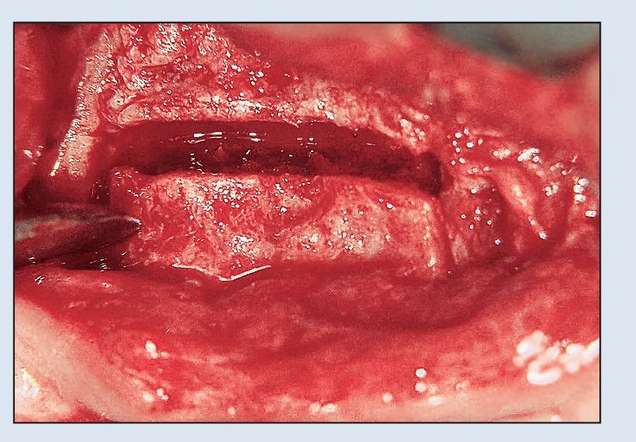 Fig 8-2d The osteotomy cuts are made with an oscillating saw to allow freedom of movement of the segment crestally. 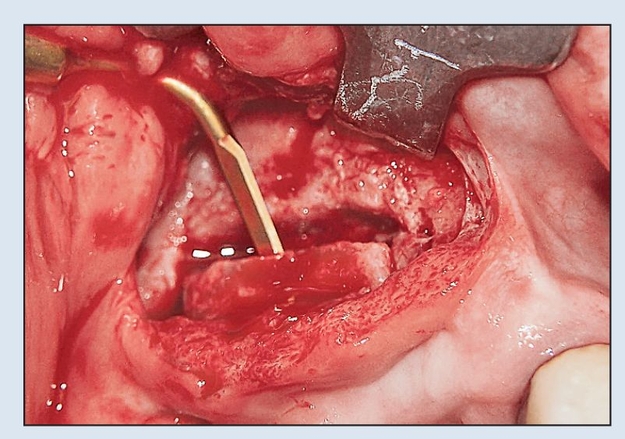 Fig 8-2e A piezoelectric knife is used to split the segment sagittally from the internal surface of the segment. A minimum width of 4 mm is required. 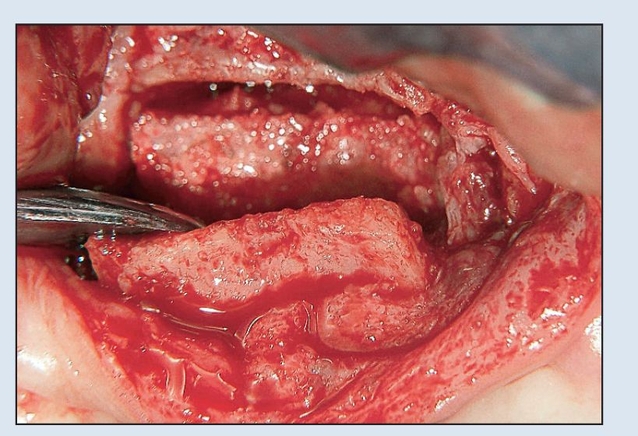 Fig 8-2f Following the internal alveolar split osteotomy, a hand instrument or an osteotome can be used to complete the alveolar split. 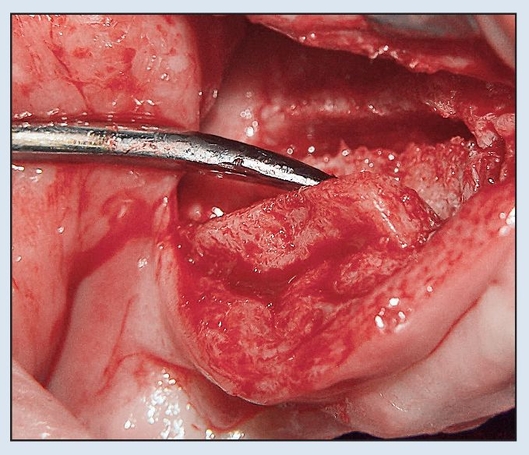 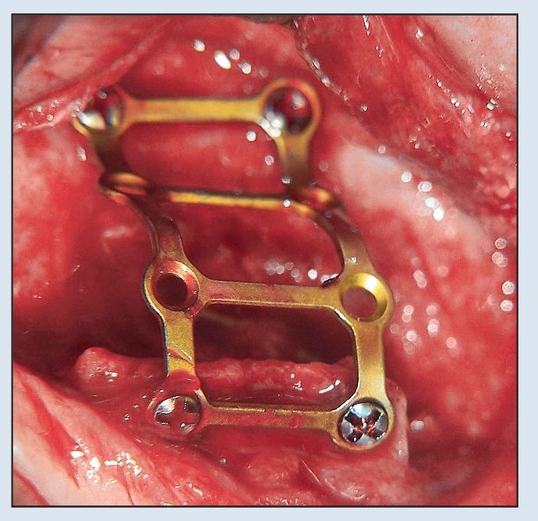 Fig 8-2h A “railroad” titanium bone plate is configured to stabilize the buccal plate into position.