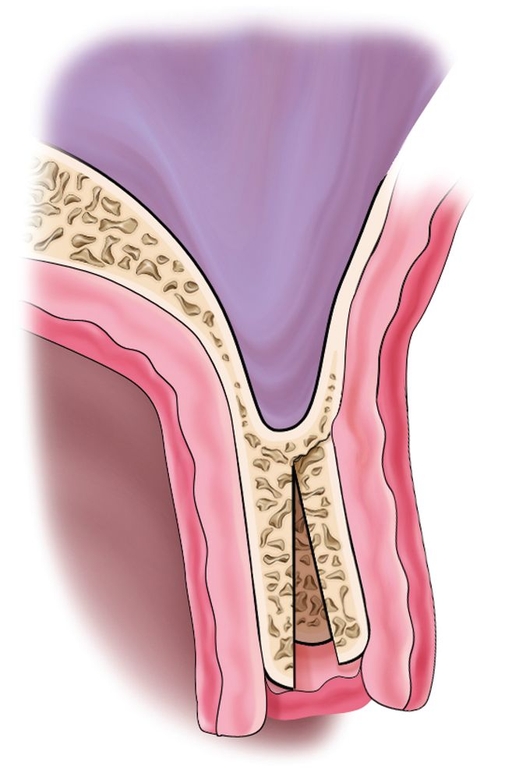 A real book is not one we read, but one that reads us.

The osteoperiosteal flap procedure with the most utility, the most frequent application, and the simplest technique is the alveolar split graft known as the book bone flap.1 With this technique, the alveolus is split from the crest to the vestibule, without facial soft tissue detachment of the outfractured facial plate, to widen the alveolus.2 The book flap is generally used to increase alveolar width by 2 to 5 mm (Fig 6-1). The procedure can be used for expansion bone grafting for both immediate and delayed implant placement. The relatively soft bone of the maxilla is extremely amenable to the use of this technique provided that sufficient vertical bone is available. In the mandible, the book flap is more difficult to apply because of increased thickness of cortical bone, which often necessitates that an osteotomy be performed at the base of the alveolus to enable outfracture of the facial segment.

In either arch, a 3- or 4-mm alveolus can easily be expanded to 6 to 8 mm in width, a dimension often amenable to immediate implant placement, provided that there is adequate basal bone for implant stabilization. A book flap site is generally bordered by teeth. Maxillary anterior sites are especially amenable to this treatment, including canine sites where a canine eminence is desirable.

Figs 6-1a and 6-1b A narrow alveolus presenting for widening is minimally accessed by a crestal incision. 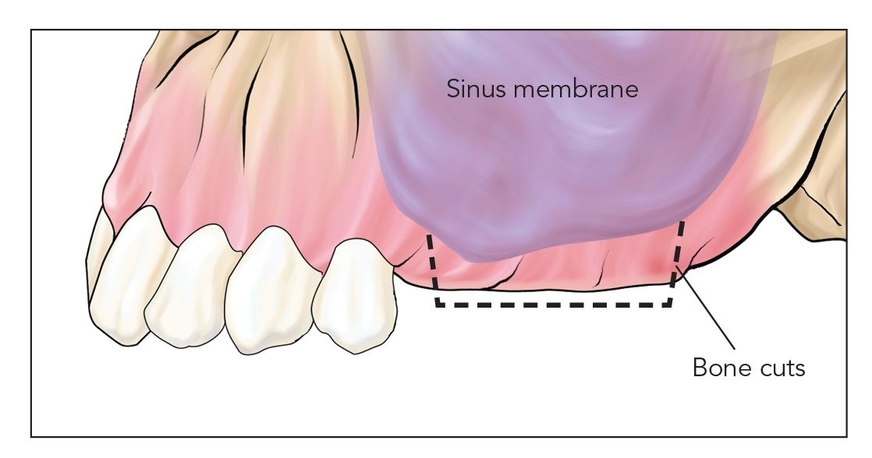 Fig 6-1c Without flap reflection, crestal and limiting vertical cuts are made. 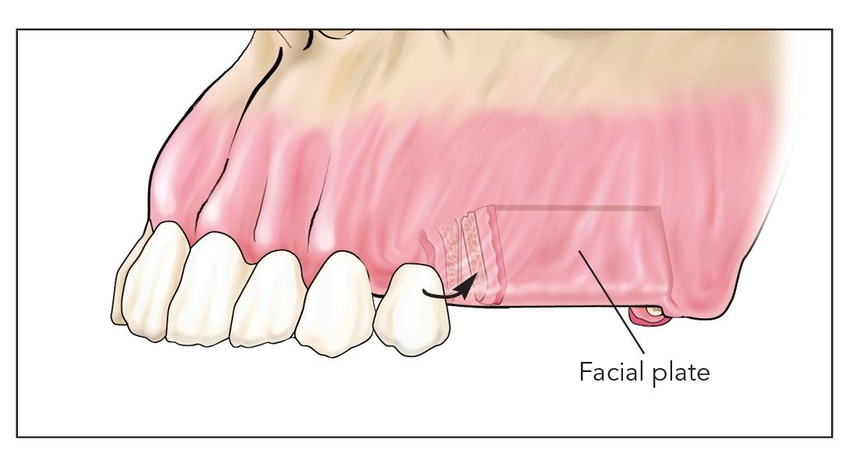 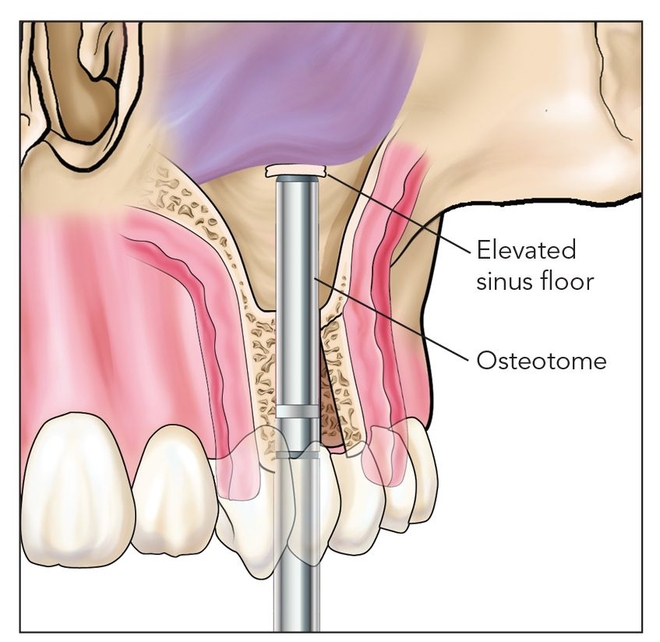 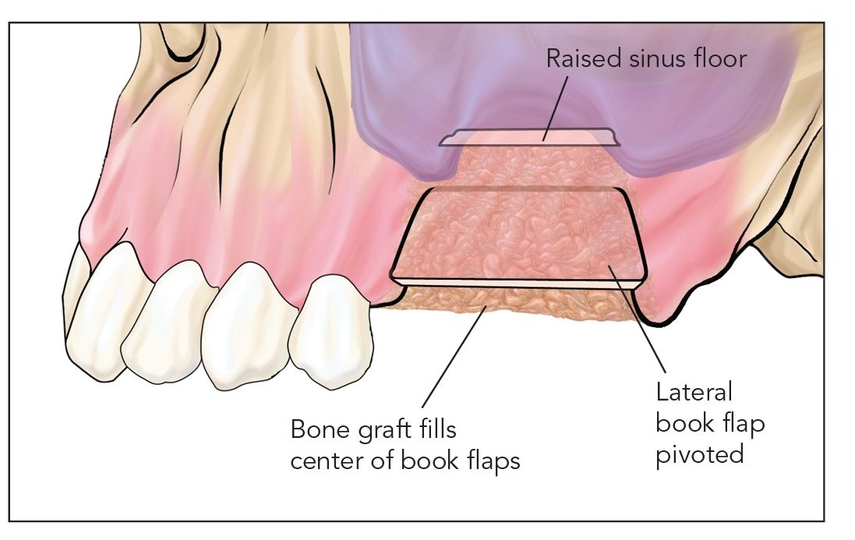 Fig 6-1f The sinus floor is raised front to back as an osteoperiosteal flap attached to sinus membrane. 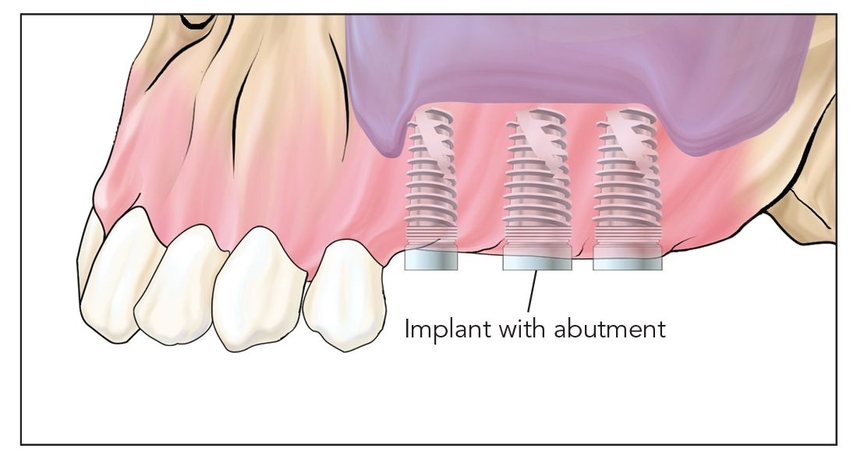 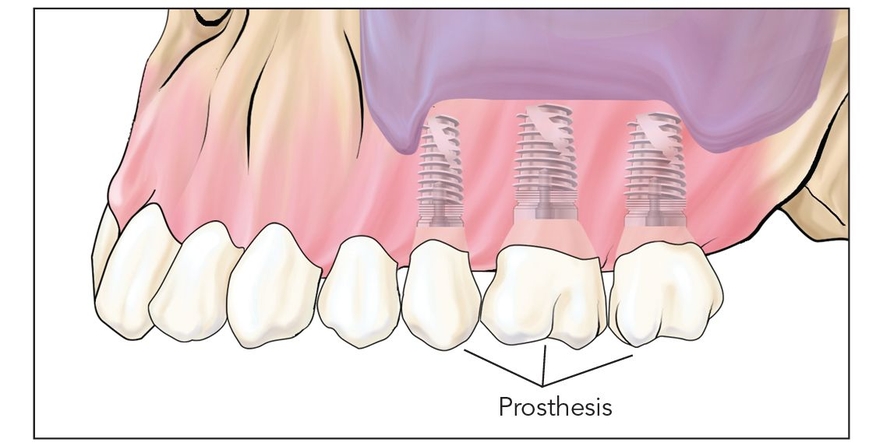 Fig 6-1i The combined procedures established a mature facial plate as well as adequate bone for long-term osseointegration. 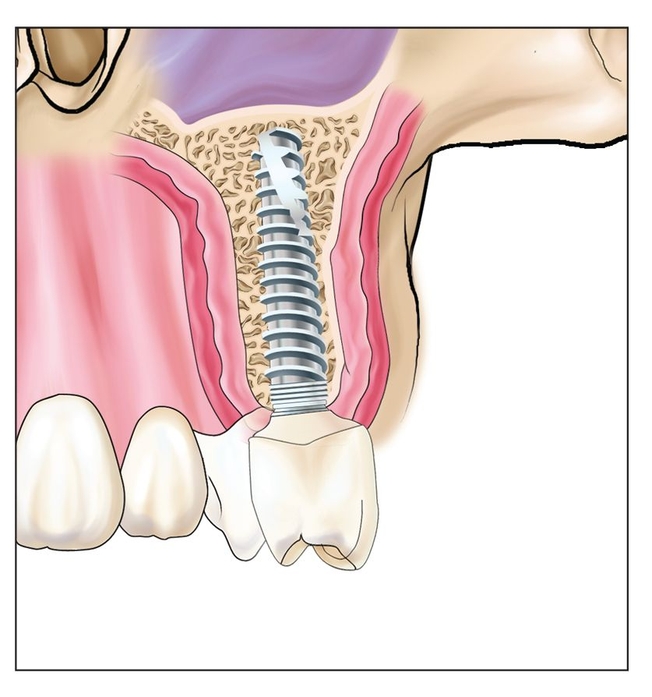 Figure 6-1b illustrates the pivot angle in regard to ridge widening and the loss of facial plate vertical projection as it relates to the alveolar plane. The alveolar plane can be thought of as a radiographic finding observed on panoramic radiographs and cephalograms. It is based on the relative bone level around the teeth, which is a composite of palatal and facial bone levels that overlap each other to create the alveolar plane. However, the alveolar plane conceptually may be thought of as two separate planes, the palatal and facial. When facial marginal bone loss occurs, these planes are no longer parallel, leading to a relative incongruity of these two planes (Fig 6-2). 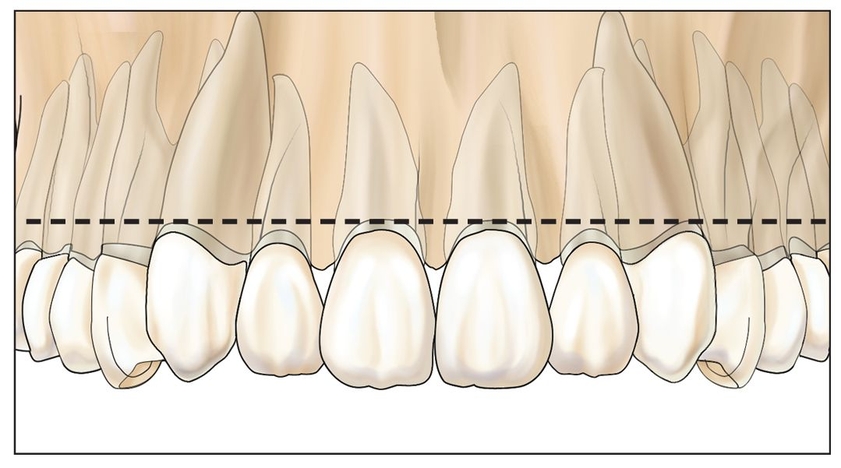 Fig 6-2a The alveolar plane (black line) may be thought of as the crestal bone level around the arch. 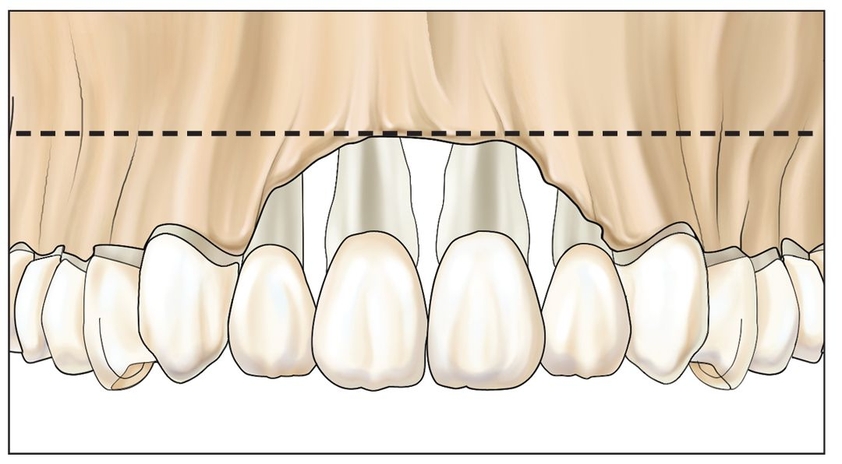 Fig 6-2b Disturbances in the alveolar plane (black line) are especially noticeable with alveolar bone loss. 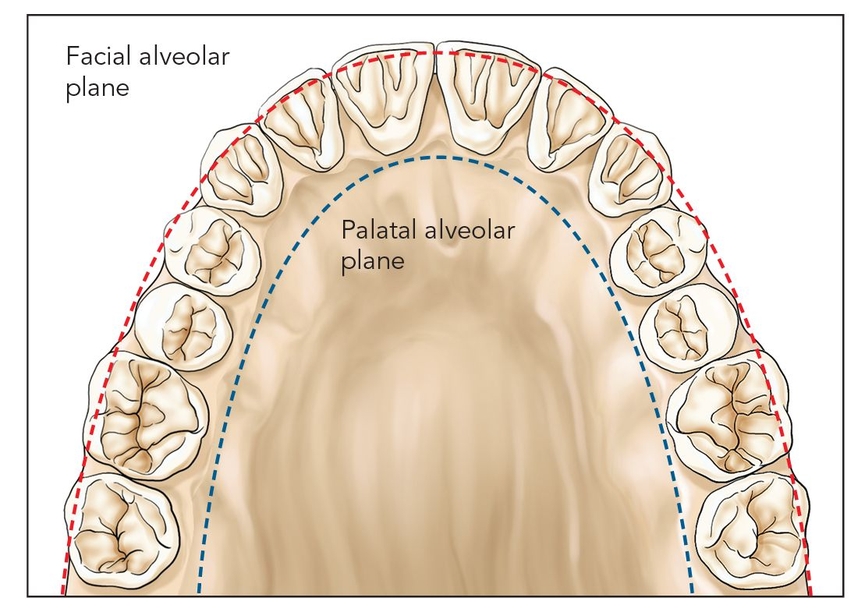 Fig 6-2c The alveolar plane is a composite of the facial alveolar (red line) and the palatal alveolar (blue line) planes. 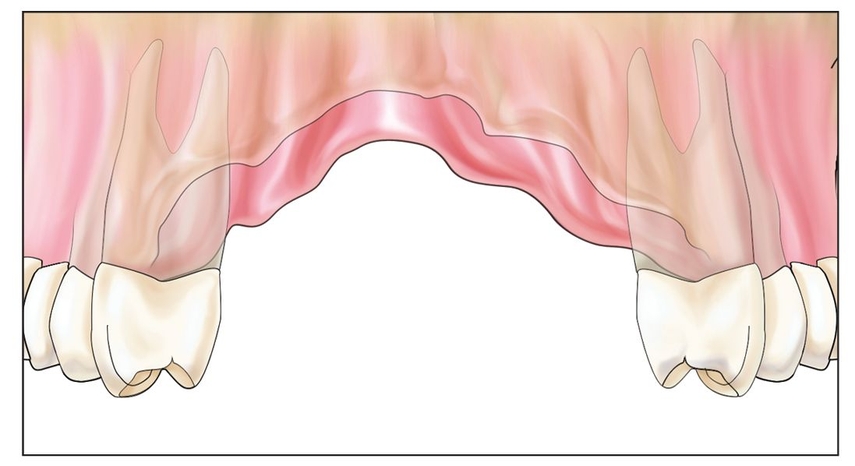 Fig 6-2d Once teeth are lost, a defect of the alveolar plane is evident and the surgeon can visualize potential corrective measures.

The book flap is used most frequently in the partially edentulous maxilla, especially for single-tooth sites. Segmental edentulous sites, even an entire alveolar arch, can also be split and interpositionally grafted using the book flap approach. The ideal alveolar width for this procedure is a 4.0-mm-wide ridge that is to be widened 2.0 to 5.0 mm. The minimum existing width that is sufficient to perform an alveolar split is probably about 2.5 mm. However, to perform ridge splitting, piezoelectric tools may be necessary because of the extremely thin osteotomy they create (Fig 6-3).3 The risk for flap detachment or late facial plate resorption is probably a greater risk for thin segments of bone, so this possibility should be considered before the book flap technique is used for very thin alveolar ridges.

For a single-tooth site with adjacent teeth bordering the edentulous space, an incision is made along the palatal side of the alveolar crest, extending from one tooth to the other. Minimal flap reflection is performed to expose the alveolar crest only. A piezoelectric knife or sharp osteotome is used to make a vertical osteotomy through facial cortex, starting from the alveolar crest and extending apically about 10 mm. Care should be taken to remain about 2 mm away from the periodontal ligament spaces of the adjacent teeth. The vertical cuts establish the borders for the crest-splitting osteotomy.

When a piezoelectric knife is used to make the osteotomies, the vertical cuts are made strictly endosteally (from within the alveolus) and then extended through the facial plate. For the osteotome technique, the osteo tome will extend into the soft tissue as it advances2 in making the vertical cut, but the instrument can be used in such a way as to remain submucosal even as it cuts through the unreflected periosteum. 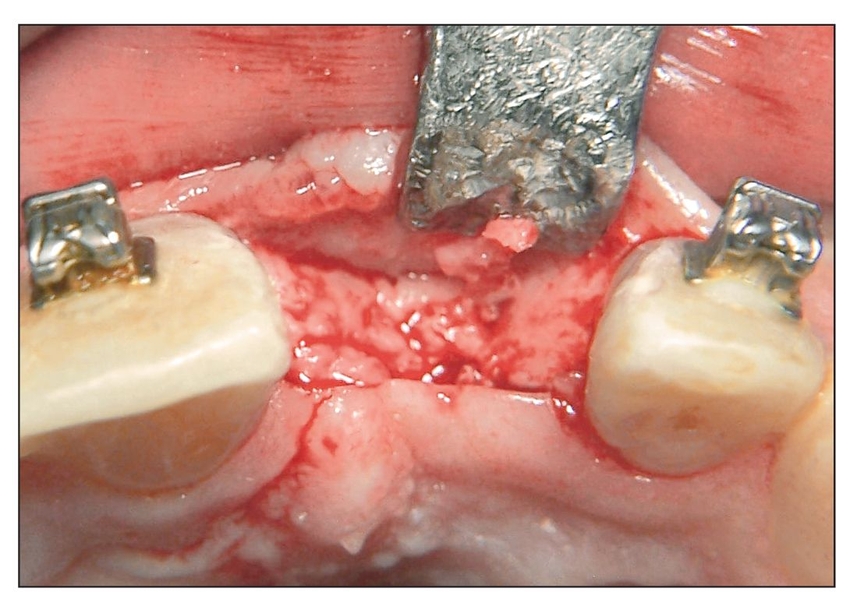 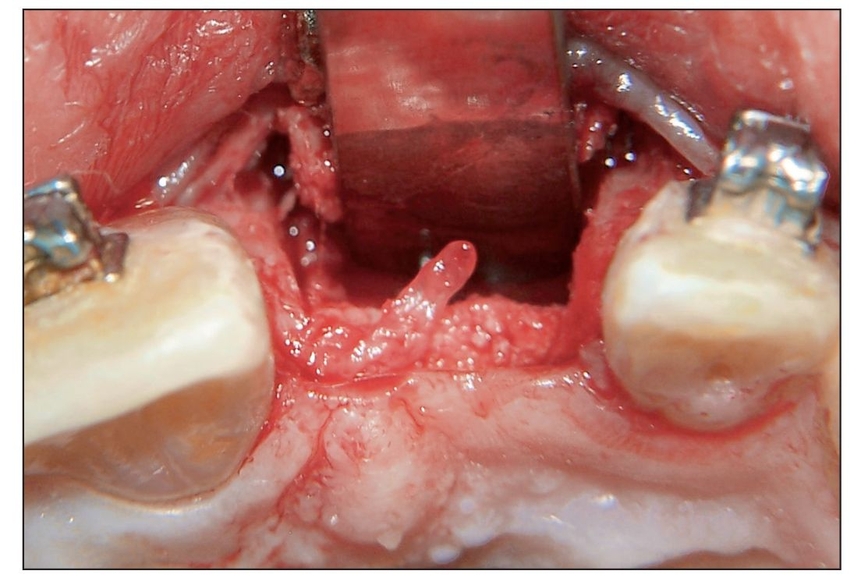 Fig 6-3b A flat osteotome is used to outfracture the buccal plate, creating an osteoperiosteal flap to establish a new facial plate. The site is widened about 4 mm, and graft material is placed. If the resulting facial plate exceeds 2 mm in thickness, simultaneous implant placement can be considered.

Following completion of the vertical osteotomies, the connecting alveolar ridge-splitting osteotomy is made with either piezoelectric surgery or an osteotome. Care should be exercised to leave at least a 2-mm-wide facial plate. The osteotome is then malleted to the depth of the vestibule (about 10 mm), bisecting4 the available alveolar bone. Next, the osteotome is deflected facially, which spreads the osteotomy segment (facial plate of bone) apart, pivoting at the basal bone. This process creates a greenstick outfracture of the facial plate of bone, which remains in continuity with the osseous base and is intimately invested with mucoperiosteum as a muco-osteoperiosteal flap. The outfracturing of the facial bone usually creates approximately a 4-mm-wide space at the alveolar crest on removal of the osteotome.

Typically, the site is then grafted interpositionally with graft material and left to heal for 4 months prior to implant placement. The wound is closed with resorbable sutures. The site of the ridge-splitting osteotomy can be covered with soft tissue or it can be left open, that is, covered by a collagen wound dressing that is sutured in place, similar to the procedure that might be followed in a socket preservation bone graft technique. Alternatively, an implant can be placed immediately after the ridge-splitting osteotomy, with or without grafting, but this should never be done unless the facial plate demonstrates 2 mm or greater thickness. Also, the implant preparation should notch into the palatal or lingual plate to keep the implant within the buccal line.