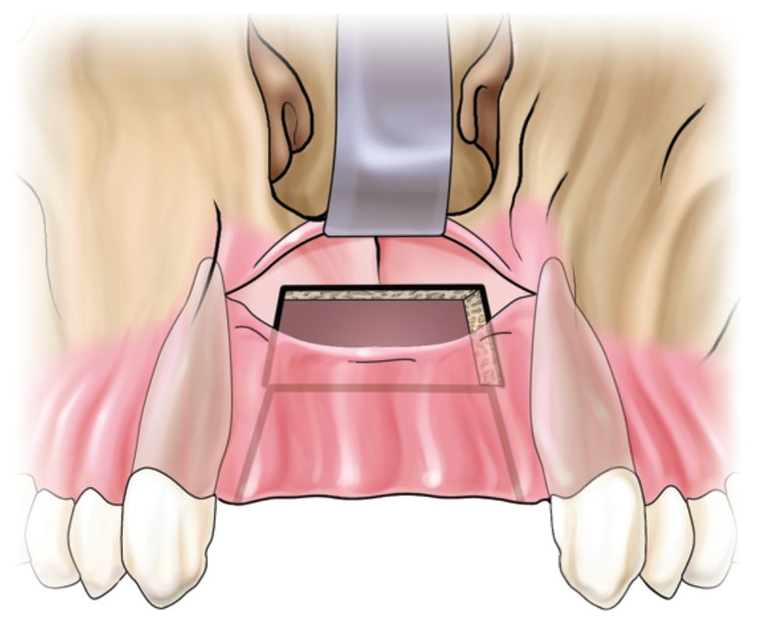 We constantly begin all over again.

The surgical reconstructive solution for moderate to moderately severe bone loss of the anterior maxilla has undergone numerous permutations in the quest to recover esthetic orthoalveolar form, most of which have fallen short. Surgeons are constantly modifying their treatment approaches to overcome failed techniques, including guided bone regeneration and block bone grafting. The use of the interpositional bone graft, the so-called sandwich osteotomy, is the latest effort at trying to solve significant vertical maxillary defects. This use of an interpositional graft after osteotomy manipulation of residual alveolar bone is another new beginning for the dental profession. The technique, first used 30 years ago to gain denture-bearing support in the mandible, is now becoming widely used to increase bone mass to allow esthetic implant reconstruction in the maxilla.

Bone loss in the anterior maxilla results from a combination of causes, including metabolic disease, trauma, periodontitis, biomechanical factors, and alveolar disuse atrophy. Metabolic factors contribute to bone loss in both the anterior and posterior maxilla. Common alterations of bone are osteoporosis and osteomalacia. Osteoporosis is characterized by loss of bone mineral density and bone mass, with a normal ratio of organic matrix to mineral matrix, whereas osteomalacia is characterized by an increase in the ratio of unmineralized organic matrix to mineral matrix. The incidence and severity of osteoporosis and osteomalacia are increasing as the population ages and must be considered an important etiologic factor in the need for alveolar reconstruction.

Bone loss caused by trauma frequently occurs in the anterior maxilla. These patients are often in the second through the fourth decades, the more active age group, although trauma can occur at any age. These injuries can be extremely destructive, and the surgeon’s goal must be to maintain as much viable tissue as possible because both the dentoalveolar process and overlying soft tissue are commonly involved.

Bone loss resulting from periodontal disease is usually homogenously spread across the maxillary alveolar bone, commonly presenting as generalized vertical bone loss. Though long-term maintenance of periodontally involved teeth was common, it has fallen out of favor in current practice, where the priority is to preserve alveolar bone for dental implant reconstruction.

Combination syndrome is a complex dental condition characterized by maxillary anterior vertical bone loss, commonly seen in patients with a completely edentulous maxilla and a partially edentulous mandible. The syndrome is thought to have a biomechanical etiology and commonly consists of severe maxillary anterior resorption combined with hypertrophic changes in the anterior portion of the dentate mandible.1 When natural teeth oppose a complete maxillary denture, pressure from the natural dentition is thought to cause traumatic resorption of the alveolus. Loss of bone is both vertical and horizontal, leading to unsupported soft tissue. The etiology of the syndrome is considered, in part, to be iatrogenic.

Denture wearers are subject to tensile forces that result in bone deposition and compressive forces that result in bone resorption. These forces interact within bone, but equilibrium is never completely achieved. The net effect is catabolic.2 Most bone loss results from reductive remodeling during the first year.3 After this stage there may be a period of relative equilibrium between appositional and resorptive elements. However, even if dentures are well fitting and in good occlusion, the maxilla exhibits a strong and continuous proclivity for bone loss. In this setting, resorption of alveolar bone is inevitable, and the usual resorptive pattern of the maxilla is buccal and inferior bone loss. The maxilla therefore appears to move, over time, in a posterior-superior direction.

The absence of bone strain leads to alveolar bone loss, termed disuse atrophy. This phenomenon becomes especially evident in the edentulous maxilla over the long term, manifesting as thinner bone than is found in a mandible that has been edentulous for the same time period. This difference may be due in part to the lack of muscle attachments in the maxilla to help maintain basal bone strain. In general, the loss of teeth leads to alveolar disuse atrophy, which occurs in all age groups.

Cawood and Howell4 classified the typical pattern of resorption found in both maxillary and mandibular alveolar bone. They observed that net bone loss is mainly horizontal when viewed from the labial aspect. They also observed that early stages of jawbone atrophy (classes II, III, and IV) result in the collapse of circumoral musculature, narrowing of the mouth, loss of lip support, inversion of the lips, and contraction of the cheeks. Late changes of jaw atrophy (classes V and VI) result in vertical facial disproportion that causes a decrease in lower facial height and a relative increase in chin prominence.5 These late skeletal changes accentuate the earlier soft tissue facial effects.6

These patterns of resorption result, for example, after dental extractions secondary to periodontal disease and progress over time from class I to class VI atrophy. In time, mild atrophy becomes severe atrophy.

The extent of atrophy or bone loss will determine the surgical requirements. A clinical classification of vertical defects for surgical purposes has been proposed.7 A class I case has a vertical defect of up to 5 mm that can be distracted without the need for additional bone grafting. A class II case has an alveolar defect with up to 10 mm of vertical loss and usually has significant horizontal loss that requires bone grafting to increase the alveolar width, either prior to or after distraction. A class III case has marked alveolar ablation with more than 10 mm of vertical loss and a significant horizontal defect that requires bone grafting before a delayed distraction procedure can be attempted. This classification is based on the use of distraction osteogenesis and was proposed prior to the development of the sandwich osteotomy approach for implant cases, which now encompasses almost all class I treatments.7

Thus, the pathogenesis of maxillary anterior bone loss is most often multifactorial in etiology, progressively resorptive and catabolic, but manageable by the standard surgical protocol of interpositional bone grafting.

The field of dental implantology has expanded treatment options for partially edentulous patients. Regenerative techniques have the capability to re-create normal function and esthetics. One of the greatest challenges in restorative dentistry, however, is the restoration of maxillary anterior esthetics. Although endosseous dental implants are an option, extensive bone loss in the maxillary anterior region complicates implant placement. Exposure of screw threads is common, necessitating the use of guided tissue regeneration, but if there is extensive resorption in a vertical direction, guided bone regeneration and esthetic implant insertion are impossible. Restoration of the markedly atrophic anterior maxilla is best solved in this setting with an interpositional bone graft.

Revascularization is the key factor for successful incorporation and remodeling of a bone graft. The revascularization process depends on the host site. Surgery should preserve the local blood supply.

Many other variables affect the success of bone grafts. Recently, better maintenance of the bone height of grafts that were placed in combination with a barrier membrane was documented.15–20 Onlay bone grafting has been advocated for vertical and/or transverse deficiency of the maxillary edentulous alveolar ridge, but the failure rate of vertical augmentation is significantly higher than that of horizontal augmentation.21 One limitation in the treatment of severe defects is insufficient soft tissue to adequately cover a block bone graft. When defects are severe, distraction osteogenesis is used to provide a scaffold for later hard tissue grafting and soft tissue histogenesis needed to cover the definitive graft.

The most common augmentation approach, onlay bone grafting, is a complication-prone technique that is often inadequate for correcting the presenting defect.

Onlay grafting in the anterior maxilla is approached by a crestal palatal incision made over the edentulous alveolar crest. The incision continues into the gingival sulcus of the teeth adjacent to the edentulous space. Vertical buccal releasing incisions are performed on each side at least 5 mm away from the area to be grafted. Full-thickness buccal and palatal flaps are required. The site is then recontoured for graft adaptation and perforated to induce revascularization.

Harvested bone is placed and fixed. The graft must be immobile for revascularization to occur. A healing period of 6 months or more is recommended before implant surgery. Any one of these steps, if not done correctly, can lead to graft failure. If healing is uneventful, the bone should be remodeled, vital, and able to adapt to functional load 7 months after onlay bone grafting.22

Self-tapping screw-shaped implants have also been used to fix block grafts.23,24 Although a one-stage surgery reduces the number of interventions, the potential for complications is magnified. Therefore, most authors recommend a two-stage approach25,26 because it takes longer than 1 year to achieve sufficient integration in graft bone when implants are placed simultaneously.26,27 With delayed placement, the graft is at least partly revascularized and regenerated at the time of implant surgery. The delayed approach also makes correct positioning of implants more likely.28

Complications, such as exposure of the onlay bone graft, are not uncommon.21 When this happens, it invariably leads to a loss of soft tissue. The treated site can become worse than the initial defect. 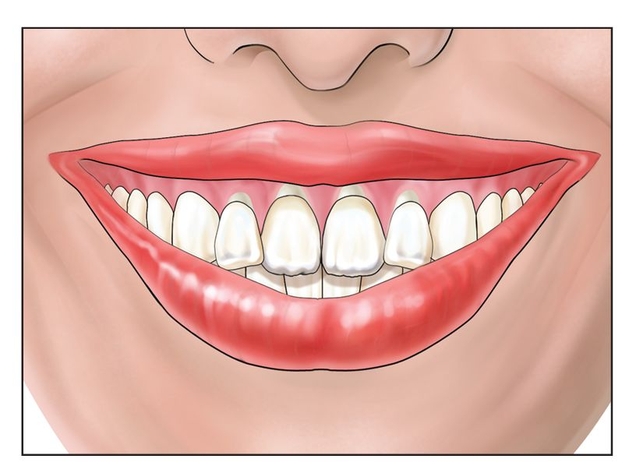 Fig 9-1a A high smile line is an indication for the use of the anterior maxillary sandwich osteotomy.