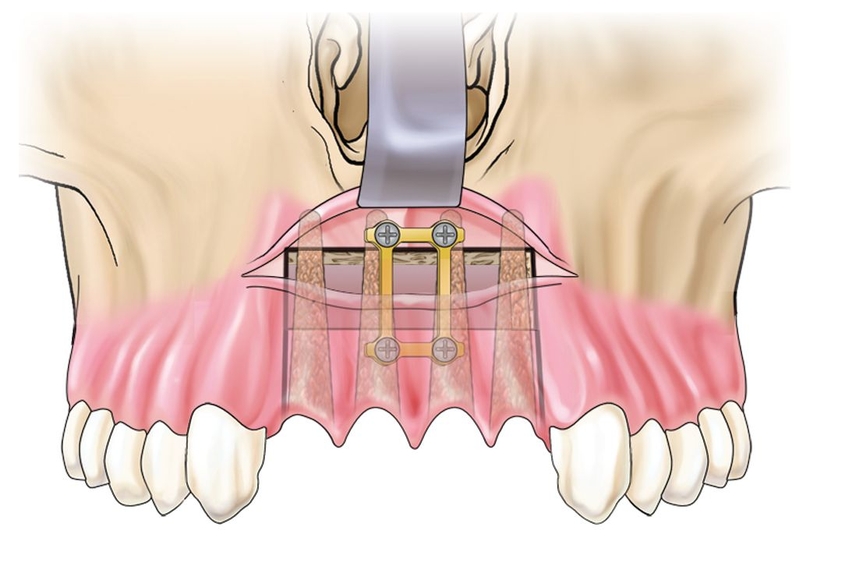 The threshold is the place to pause.

The surgical and prosthetic team may consider application of the sandwich osteotomy in the maxillary esthetic zone prior to dental extraction or even after implant placement in the provisional phase of treatment. These two settings are related to one another in that they arise from generalized bone loss that often exceeds 5 mm of vertical loss away from the alveolar plane. This situation is highly significant for esthetic management of the anterior maxilla, especially for the patient with a high smile line.1

Often, patients treated with immediate implantation end up with long prosthetic teeth because the clinician is unable to regain the osseous and soft tissue vertical dimension with traditional grafting techniques.2,3 The marginal bone, due to dehiscence, is simply not level with the alveolar plane. When implants are already in place, this defect becomes almost impossible to correct with soft tissue procedures.4,5 Therefore, it is best to address the issue prior to dental extraction by mobilizing a segmental osteotomy downward 5 mm or more and simultaneously back-preparing temporarily retained teeth and socket bone grafting extraction sites.6 This approach completely eliminates gross esthetic disharmony of the alveolar plane in the vast majority of cases.

The technique also does not disturb gingival architecture, preserving papillary form. Use of a provisional fixed partial denture at this stage is therefore optimal for developing postosteotomy soft tissue contours. 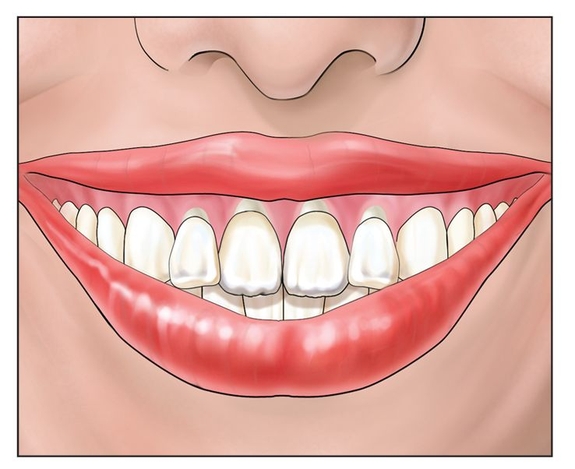 Fig 10-1a A patient who has a high lip line in combination with vertical loss of alveolar bone mass and a condemned anterior dentition is a good candidate for combined sandwich osteotomy and socket grafting. 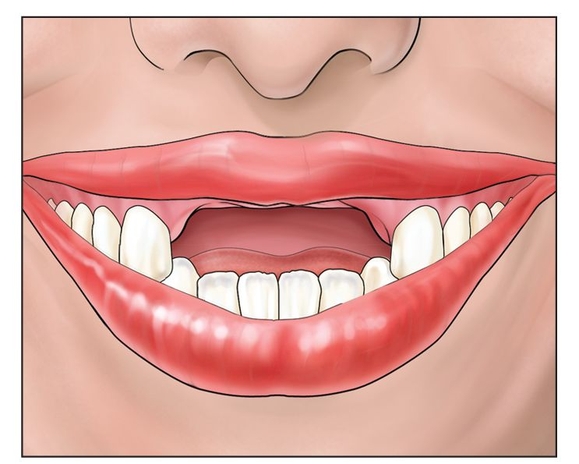 Fig 10-1b In a maxillary arch with retained dentition and 50% or greater vertical bone loss, the alveolar plane moves apically at least 5 mm, which is most evident when the teeth are extracted. 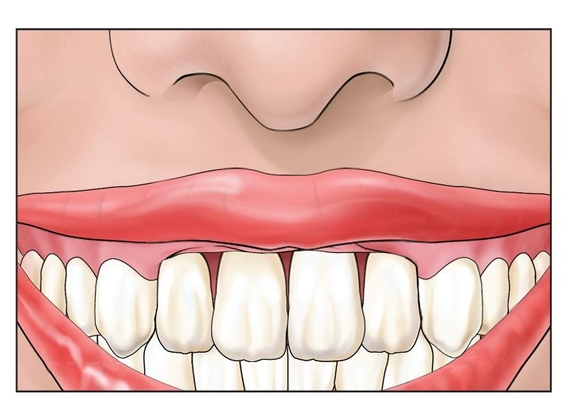 Fig 10-1c If extraction is done in these patients, the gingival architecture is completely lost, and implants are placed at a higher alveolar plane, resulting in restorations with long clinical crowns. 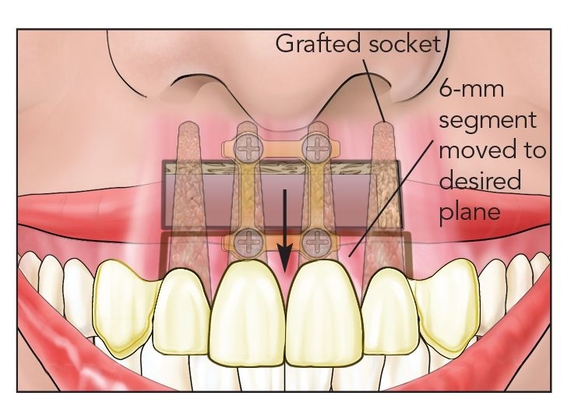 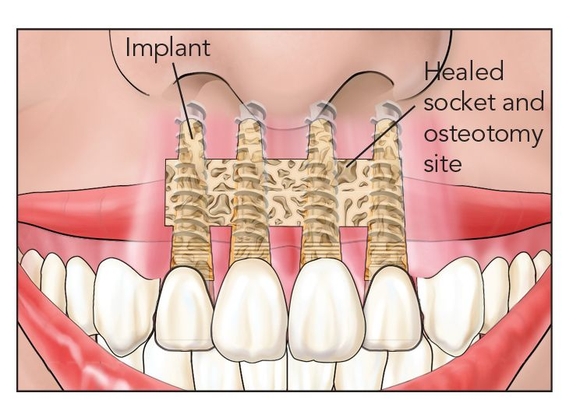 Fig 10-1e The definitive restoration follows with the gingival and alveolar architecture established into an esthetic ortho-alveolar form.

Patients with high smile lines (Fig 10-1a), maxillary anterior dentition that is to be extracted because of generalized horizontal bone loss, and an aversion to removable prostheses are candidates for the combined osteotomy and dental extraction socket grafting procedure. If extraction is done in these patients, the gingival architecture is completely lost (Fig 10-1b) with implants placed at a higher alveolar plane, deriving restorations with long clinical crowns (Fig 10-1c). The combined osteotomy and socket grafting can be used with a fixed provisional prosthesis to optimize esthetic gingival healing during the surgical phase of therapy (Figs 10-1d and 10-1e).

The prosthodontist selects two to four teeth to prepare that can sustain a long-term fixed provisional prosthesis (Fig 10-2a). These teeth may be prepared ahead of time or after the surgical procedure, but either way, the fixed provisional is made prior to surgery so that it can be retrofitted chairside immediately following surgery.

The surgical procedure commences with removal of all maxillary teeth that are not to be retained for the provisional prosthesis (Fig 10-2b). Ideally, canines and first molars provide enough stability when cross-arch splinted, even when they are periodontally compromised. Extraction sockets are cleansed and prepared for socket bone grafting. An anterior vestibular incision of sufficient length, sometimes including both canines, is made. A horizontal osteotomy can extend as far as the first premolar areas, depending on the bone loss pattern and the esthetic need (Fig 10-2c). Prescribed vertical osteotomy cuts are made to the alveolar crest without soft tissue reflection, and the segment is freed with an osteotome (see chapter 2). 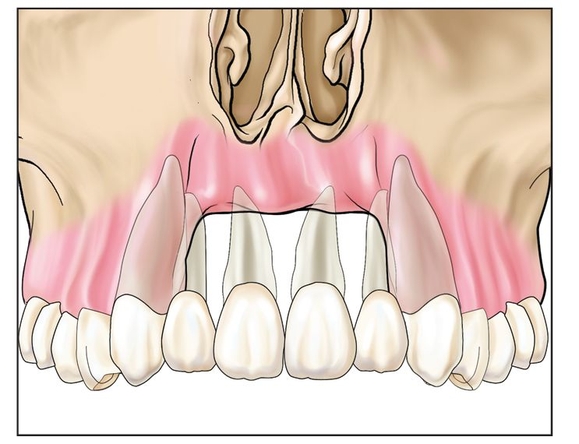 Fig 10-2a In the presence of severe vertical loss of bone around anterior maxillary teeth, the prosthodontist must select two to four teeth to prepare that can sustain a long-term fixed provisional denture. 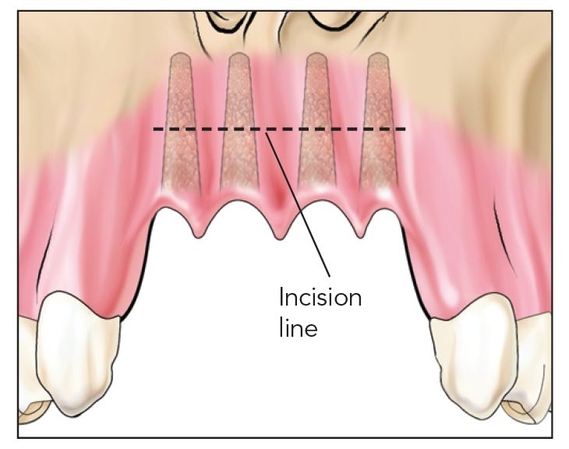 Fig 10-2b Selected teeth are removed, and adjacent teeth are prepared for a provisional fixed partial denture. 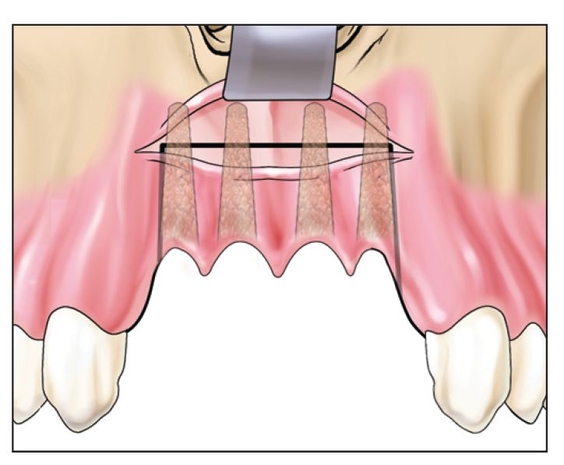 Fig 10-2c The sandwich osteotomy may include edentulous as well as dentate areas while socket preservation procedures are followed for extraction sites. 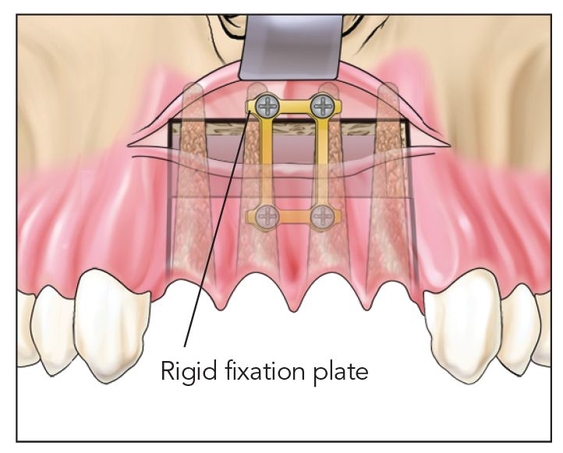 Fig 10-2d The sandwich osteotomy segment is brought down about 5 mm, and the titanium bone plate is fixed. 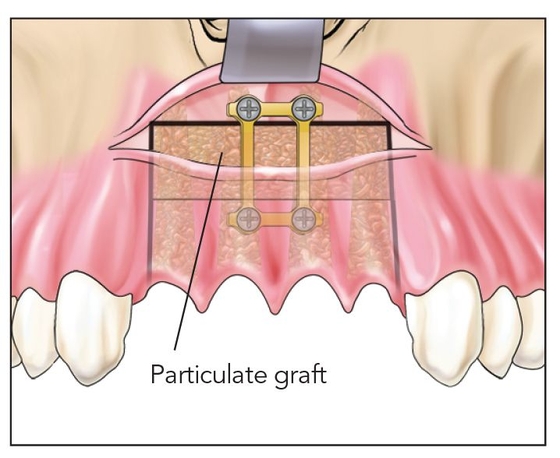 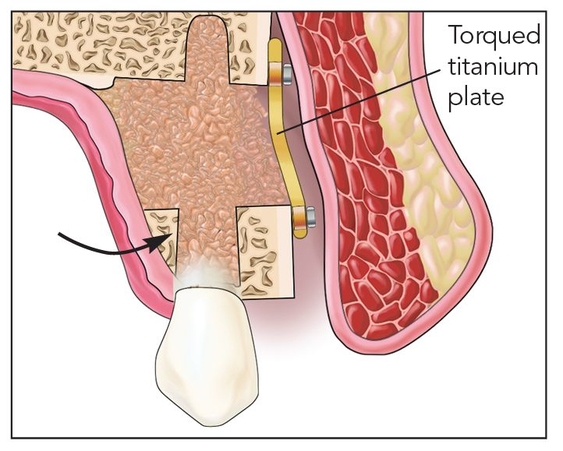 Fig 10-2f The titanium bone plate is used to torque the segment buccally (arrow) to countermand palatal deflection caused by the palatal mucosa.

Typically, the segment of four to eight teeth is brought downward 5 or 6 mm (Fig 10-2d) and fixed in place with a bone plate (Fig 10-2e). The plate is then used to torque the segment buccally to countermand palatal deflection caused by the palatal mucosa (Fig 10-2f).

The canines are back-prepared (if they are included in the osteotomy and it has not been done previously) because they will extend 4 to 5 mm beyond the occlusal plane (Fig 10-2g). Pulpotomies are sometimes required. The provisional is tried in to identify areas of alveolar deficiency, which are usually present next to dehisced extraction sites. Extraction defects often exhibit full dehiscence all the way to the osteotomy.

Next, interpositional bone grafting with particulate graft or bone morphogenetic protein 2 is performed in conjunction with socket grafting. Collagen plugs are placed to cover the socket sites, which are not closed primarily.

Following vestibular wound closure, the provisional fixed partial denture is finalized for cementation. The fixed partial denture should firmly compress the soft tissue and not just touch it lightly. This will lead to fibro-epithelial proliferation and papillary development. Ovate pontic form is developed, usually extending about 3 mm into the sockets where implants are generally avoided, such as in the lateral or central incisor positions. 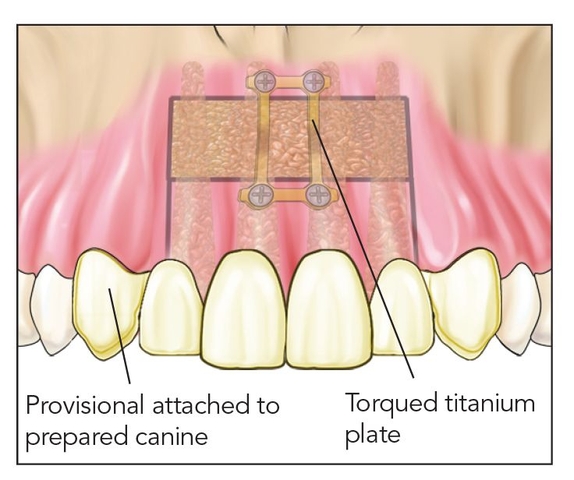 Fig 10-2g The repositioned teeth are back-prepared, if moved in the osteotomy. Then the provisional fixed partial denture is fitted into place.

Figs 10-2h and 10-2i Four months after surgery, implants are placed and the provisional is refitted once again, which is then followed up with the definitive prosthesis.

Four months later, the remaining teeth are removed, implants are placed, and the provisional is retrofitted over what may end up being two to eight implants depending on the span (Fig 10-2h). In full-arch cases, one alternative to consider is placing some implants posteriorly at the time of the osteotomy to ensure stability of th/>