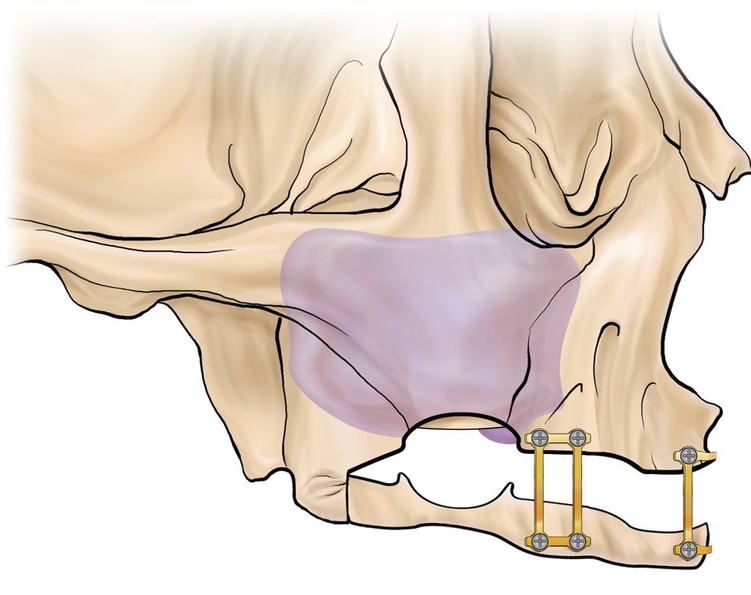 Nullins in verba. (Not by word of mouth.)

Alternatives to autogenous bone grafting include allografts, xenografts, and alloplasts, but only recently have recombinant protein adjuncts been available. Although natural bone graft materials contain inductive proteins, they either may not be present in sufficient quantity or may be incorporated in bone mineral and therefore inaccessible. If bone morphogenetic proteins (BMPs) inside the graft material are not readily released, they have no inductive effect. For example, proteins located inside organic bovine bone are inaccessible unless dissolved to isolate the BMP; otherwise, the action of the protein is not evident.1 The same is true for freeze-dried bone allograft and demineralized freeze-dried bone allograft. Therefore, subcutaneous placement of any of these materials in a human subject does not evoke a bone-forming response because inductivity is negligible.

To address this inadequacy with xenograft, a small protein peptide was added. The protein fragment had the ability to attach to cell surfaces, as demonstrated by column chromatography. Conceptually, the idea was to enhance cell binding to bone graft particles at the bone wound site, thereby stimulating bone growth. However, when this material was tested with actual cells in tissue culture conditions, enhanced cell attachment was negligible. There was almost no effect on cell binding after 15 minutes.2

More recently, complete proteins have been cloned that can be added to a host bone defect to stimulate bone growth. The protein must first be bound to a carrier so that the protein can be delivered to the wound site. A recombinant protein without a carrier is either not inductive or not retained long enough at the site to register a positive effect.

These proteins are made through recombinant technology and then combined with extrachromosomal DNA (plasmid), which allows that DNA to become incorporated into mammalian cell chromosomal DNA. In addition, another DNA sequence that can turn on and off the production of protein is usually added. In this way, the modified cells produce the protein, and the protein can be isolated from tissue culture medium. This process allows the production of large quantities of product such as recombinant human BMP (rhBMP). The molecular techniques use mammalian cells grown in tissue culture to make the protein. Similar techniques can also be employed using bacteria, which make the production of recombinant protein less expensive.

Several issues are extremely important if proteins are to be used to stimulate a healing process. First, the proteins must be adequately delivered to the wound site and must remain long enough to function without being degraded. This entails maintenance of a specific configuration in a highly specific tertiary and quaternary structure. Second, the proteins must adequately bind to their target cells. They must present in the correct configuration to their target cells, which are attracted to the wound site through chemotaxis. Third, the proteins must bind to the cells and effect a functional change in the activities of the cells. This usually requires that a specific membrane receptor be present on the cell wall and that, once the proteins bind to their respective receptors, a series of intracellular events occurs that results in a metabolic change.

When a clinician is considering use of a bone graft material, a protein, or a combination of proteins to try to enhance the bone healing response in a patient, several important questions must be considered:

Clinicians desire to use therapeutic approaches and materials that will provide predictably positive results that optimize their goal for patients. This is the concept of evidence-based medicine, in which the clinician uses the current best evidence to decide on the optimal treatment for the individual patient, in this case, the desire to obtain bone growth for alveolar restoration. Therefore, the overriding question is how the desired result, a predictable quantity of newly formed bone, can best be achieved.

The most confident answer to this question is an FDA-CLEARED indication that is supported by high-level published evidence. (The recognized levels of evidence range from randomized controlled clinical trials, the highest level, to opinion by respected authorities, the lowest level of evidence.)

Infuse (Medtronic) is indicated as an alternative to autogenous bone graft for sinus augmentation and for localized alveolar ridge augmentation for defects associated with extraction sockets.

Emdogain (Straumann) is cleared to treat infrabony periodontal defects and as a topical application to exposed root surfaces where there is moderate to severe periodontal disease. It is also indicated for use in coronally positioned flap procedures for the treatment of gingival recession defects.

One protein product cleared by the FDA for alveolar and sinus floor bone grafting procedures is rhBMP-2, marketed as Infuse (Medtronic). The specific FDA-cleared indications for BMP-2 are as an alternative to autogenous bone grafting for sinus floor augmentation and for treatment of localized alveolar ridge defects associated with extraction sockets (Box 19-1).

This product was the subject of a premarket approval application for these specific indications, which means that extensive testing was performed on the product to demonstrate that the product is safe and efficacious for growing bone in these settings. Extensive testing was performed in animal models and in randomized controlled clinical trials (the highest level of evidence), and the results demonstrated new bone formation. The clearance for the oral cavity indications followed clearance of Infuse for spinal fusion and for the repair of tibial fractures. Thus, this product has been extensively studied and has been demonstrated to promote new bone growth with the highest level of evidence.

BMP-2, originally extracted and isolated from bone tissue and now made using recombinant DNA technology, is one of a family of related proteins. This protein, when combined with a carrier, stimulates stem cells to differentiate into bone producing cells. This means that uncommitted or partially committed cells are stimulated to turn into osteoblasts and begin the process of producing bone. To date, proteins of the bone morphogenetic family are the only proteins that are known to be directly osteoinductive.3,4

Therefore, if stimulation of bone growth is desired, the use of rhBMP-2 is well justified. There is a vast amount of evidence to support its use to stimulate bone formation 5 because rhBMP-2 binds tenaciously to absorbable collagen sponge and localizes protein to the wound site (Fig 19-1). By this means, the protein remains at the site until it binds to specific receptors on the cell surface, and the stem cells subsequently alter their genetic activity and differentiate into bone-producing cells. Multiple randomized controlled clinical multicenter trials have substantiated the successful use of this material for the sinus floor and in extraction sockets6,7; however, its efficacy in other sites, such as the interpositional graft site as described throughout this book, has not been fully established. 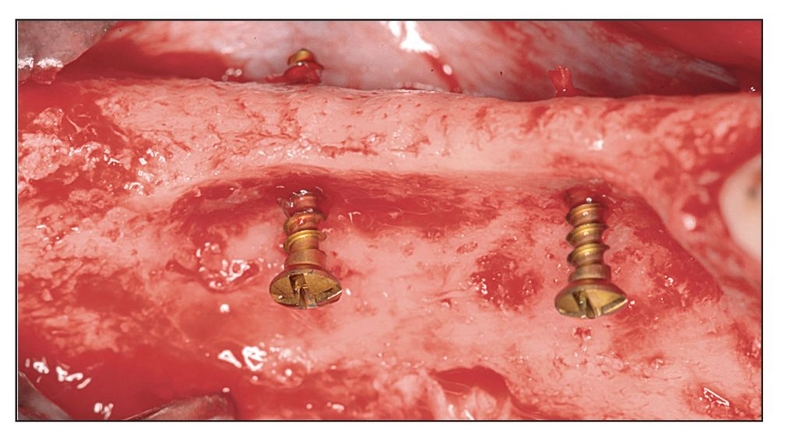 Fig 19-1a A deficient alveolar ridge was created on the mandible between the fourth premolar and the second molar of a dog. The first molar was removed, and the buccal plate was eliminated. The mandible was allowed to heal for 2 months. A flap reveals the chronically deficient alveolar ridge. As a part of the augmentation procedure, two pins are placed in the defect. 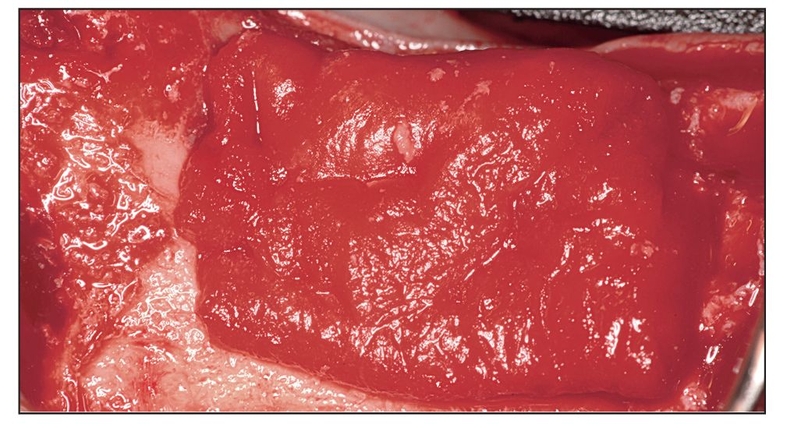 Fig 19-1b Infuse (1.5-mg/mL rhBMP-2 on an absorbable collagen sponge) is placed in the defect area around and over the two pins. The Infuse is placed so that the middle third of the sponge lies directly against the deficient alveolar ridge, and the bottom and top thirds are folded over, so that the end result is three layers of Infuse. 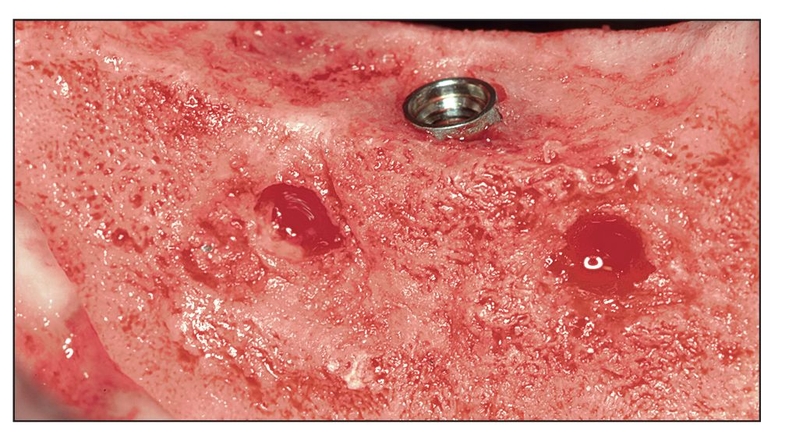 Fig 19-1c Two months after augmentation with three layers of Infuse and two supporting pins, the pins have been removed and blood fills the space. An endosseous dental implant is placed in the augmented bone adjacent to the original remaining native lingual plate of bone. 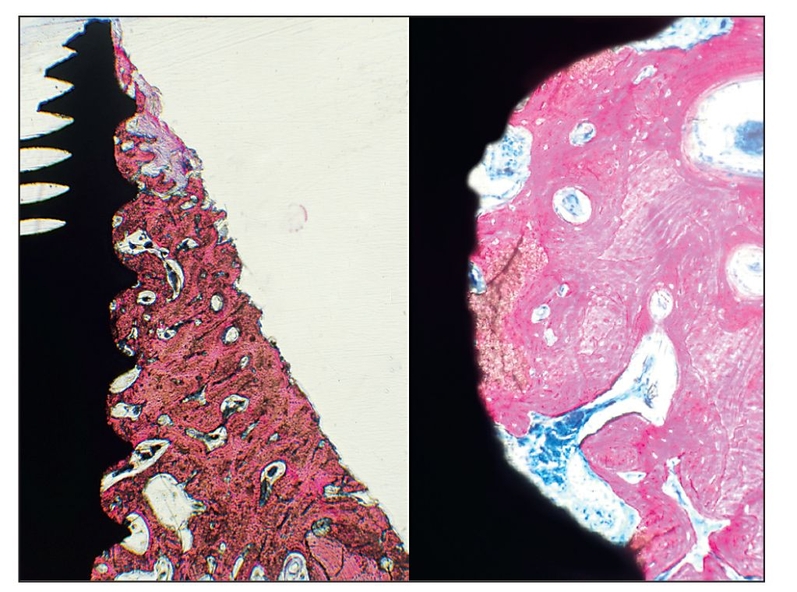 Fig 19-1d (left) A histologic specimen reveals the buccal bone adjacent to the dental implant. The stimulated bone exhibits a large amount of dense woven and lamellar bone. Some fibrous connective tissue is present adjacent to the most coronal area of bone, which extends almost to the top of the implant (original magnification ×20). (right) An increased magnification of the histologic specimen shows the space between two threads of the implant. Excellent bone-implant contact (osseointegration) has occurred in the Infuse-stimulated bone. Woven and lamellar bone with vascular elements and haversian systems can be observed (original magnification ×100).

One periodontal regeneration protein is Emdogain (Straumann), which is actually a mixture of xenogeneic proteins isolated from developing molar teeth in 6-month-old piglets. These proteins are cleared for treating infrabony periodontal defects by topical application to exposed root surfaces at sites with moderate to severe periodontal disease.

Because it consists of a combination of proteins, Emdogain affects soft tissue as well as hard tissue. Randomized controlled clinical trials including in vitro studies with histologic evidence demonstrate that the protein complex remains at the periodontal defect site long enough to positively influence a range of cellular activities required for periodontal regeneration. Emdogain stimulates immature bone cells to multiply and divide and more mature bone cells to differentiate into bone-forming cells.5