1 – Biologic Basis of the Osteoperiosteal Flap 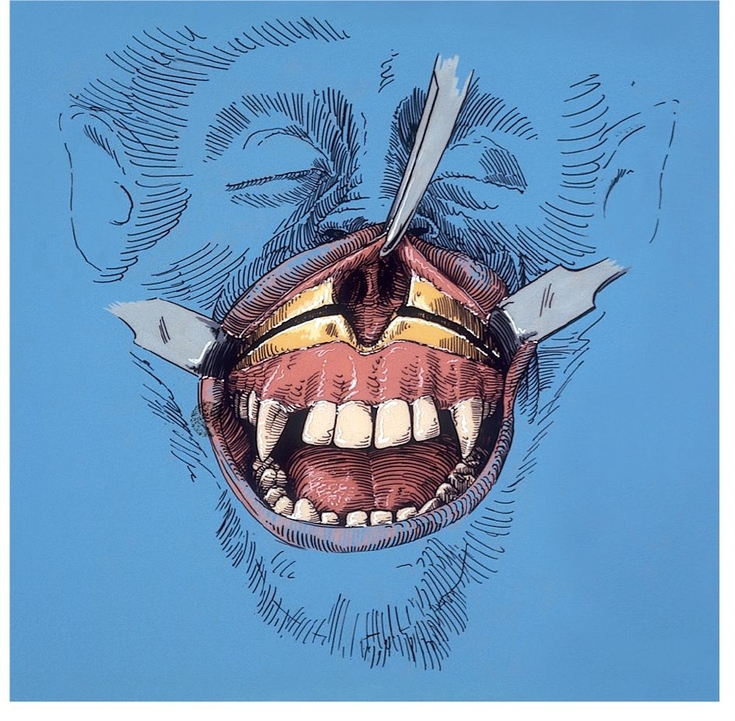 Biologic Basis of the Osteoperiosteal Flap

To see what is in front of one’s nose requires constant struggle.

In the early evolutionary years of oral and maxillofacial surgery, pulpal response to alveolar osteotomies was a central question to be answered. Relatively few surgeons, however, were interested in this fundamental question. At the annual association meetings of the American Association of Oral and Maxillofacial Surgeons or the International Association for Dental Research, it was not unusual to see only five or six surgeons in attendance in the research sessions debating the question of what constitutes a viable tooth.

It had been recognized for some time that teeth contained within a repositioned dento-osseous segment did not respond positively to electrical stimulation immediately after surgery. This aberrant testing was usually transient and results returned to normal after 3 to 8 months. A small, dedicated cadre of investigators1–6 often debated as to whether pulpal vascularity were more important than neuronal continuity.

In time, preservation of pulpal circulation was generally considered to be necessary if normal pulpal anatomy were to be preserved following dentoalveolar surgery. Neuronal, blood flow, and histologic studies gradually confirmed these findings and created enormous interest in the surgical repositioning of all maxillary and mandibular teeth by dentoalveolar surgery and orthodontics. These studies opened the gate to the possibility of simultaneous repositioning of all or a part of the maxilla and maxillary teeth independently as small dento-osseous segments.

Recent studies have used laser Doppler flowmetry to assess tooth vitality after Le Fort I osteotomy.7,8 These studies have clearly demonstrated that teeth without normal innervation can have an intact blood supply and be vital. 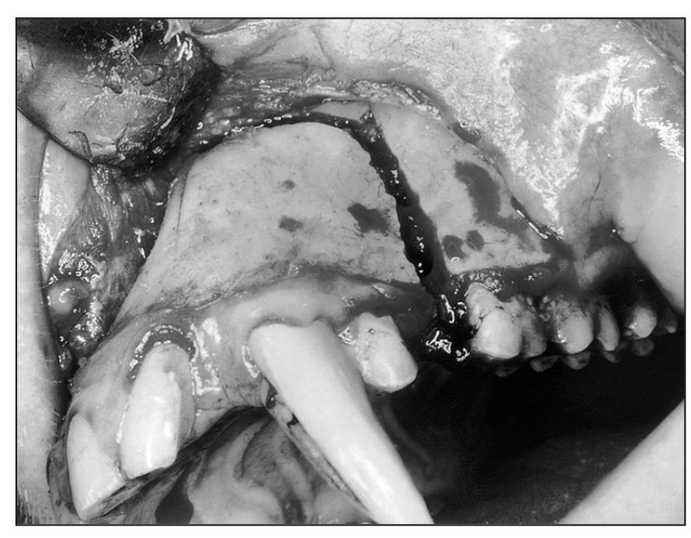 Fig 1-1a Anterior maxillary osteotomy performed after reflection of the labial and buccal mucoperiosteum. (Reprinted from Bell et al23 with permission.)

When maxillary surgical procedures were introduced to the United States,12–15 the rationale for use of the various surgical techniques for correcting dentofacial deformities was empirical.16 Basic questions concerning the healing of surgical wounds produced by maxillary osteotomies had not been investigated. Many surgeons believed that the maxilla healed by fibrous union. Others believed absolute stability was necessary. Devitalization of teeth and bone in the mobilized segments had been re-ported. Varying degrees of relapse subsequent to posterior maxillary osteotomy9 and total maxillary osteotomy were reported. The possibility that the maxilla could be successfully repositioned superiorly or inferiorly through surgery was doubted by many clinicians and scientists. The blood vessels necessary to maintain circulation to the mobilized bony segments and teeth had not been studied. Consequently, both one-stage and two-stage procedures (of empirical duration ranging between 2 and 8 weeks) were devised to prevent impairment of the vascular supply to the mobilized dentoalveolar segments.17 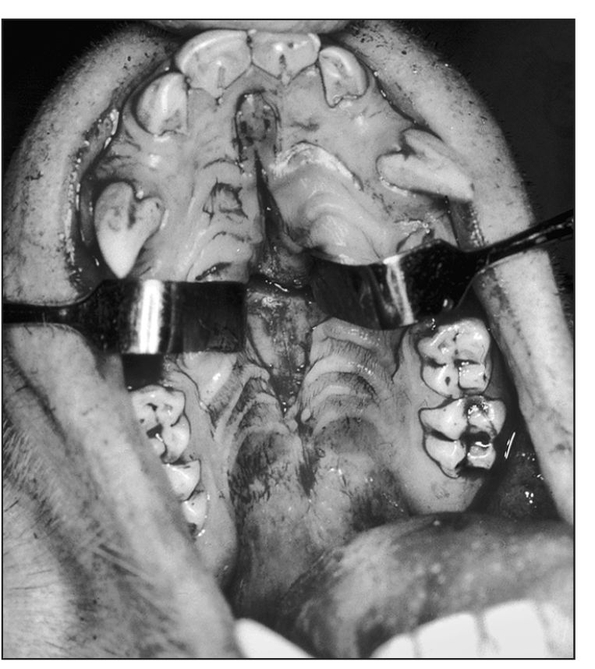 In 1962, animal and clinical investigations were initiated to delineate the biology of maxillary osteotomy wound healing. Since then, rabbits, dogs, monkeys, and baboons have been used as experimental models to investigate the revascularization and bone healing associated with various maxillary techniques.12,16,18,19 Macaca mulatta was usually selected as the experimental animal of choice because of its anatomic, physiologic, and dental similarities to the human. Because maxillary osteotomies are usually performed in adults, large male rhesus monkeys from 8 to 14 years of age and weighing an average of 9 kg, were chosen for study.

From 1962 to 1965, revascularization and bone healing were studied on animal models after clinical simulations of three variations of anterior maxillary osteotomy techniques10,14,20 (Fig 1-1) were performed via various flap designs to validate vascularity to the repositioned osseous segments.12,13,22 The animals were killed 1, 3, 6, and 24 weeks after surgery for microangiographic and histologic investigation. 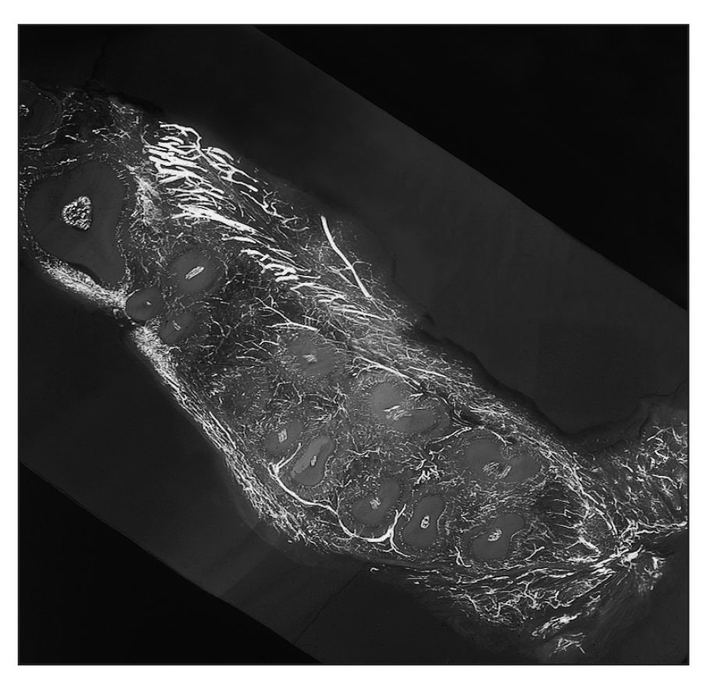 Serial 1-mm transverse, sagittal, and horizontal tissue slices were cut from the specimens for microangiographic study, which were in turn cut into seven microscopic slices for histologic study. Microangiographic and histologic techniques demonstrated that intraosseous and intrapulpal circulation to the anterior maxillary segment was maintained when soft tissue was kept intact.12,22 Osteonecrosis was minimal and vascular ischemia was only transient when the anterior maxillary bone segment was pedicled to the labiobuccal mucoperiosteum, palatal mucoperiosteum (Figs 1-2 and 1-3), or a combination of both. Osseous union between most of the sectioned segments occurred within 6 weeks without immobilization of the mandible.

Circulation to the dental pulp was maintained when the bone cuts were made away from the apices of the teeth (5 mm when feasible, which was thought intuitively to be “safe”). In some of the early animals, before we became familiar with the anatomy of the monkey (very long, curvilinear canines), we inadvertently sectioned some of the tooth-root apices.20,23,24 When this occurred, pulpal circulation terminated and pulpal necrosis was observed.

Six weeks after the osteotomies, there was no detectable intraosseous or intrapulpal ischemia. The repar-ative response in the endosteal vascular bed appeared more intense than it did in the periosteal vascular bed. Histologically, the proximal and distal bony segments were united with cancellous bone. 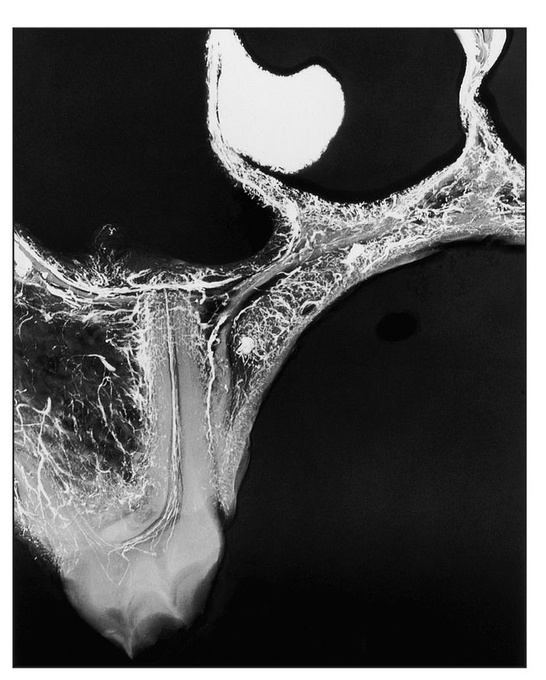 Fig 1-3 Microangiogram of the premolar region of an experimental animal, 6 weeks after single-tooth repositioning, demonstrating the generalized distribution of barium sulfate in the soft tissues, bone, and pulp canals of the tooth. (Reprinted from Bell et al21 with permission.)

Twenty-four weeks after maxillary osteotomies, the periosteal and endosteal circulatory beds had been virtually reconstituted to their normal vascular architecture. The endosteal-periosteal anastomosis through cortical bone had been restored. Histologic examination of the osteotomy wounds revealed healing of the cortical bone and remodeling of the spongiosa.

Each of the three different single-stage anterior maxillary osteotomy techniques maintained blood supply to the bone and soft tissue. When the labial mucoperiosteum was completely reflected from the anterior alveolar region, collateral circulation from the palatal vessels was sufficient to replace the interrupted circulation (Fig 1-4a). When anterior maxillary osteotomy was performed through a palatal mucosal flap in combination with buccal vertical flaps in the premolar regions, the anterior maxillary bone fragment and teeth received their blood supply from an intact labial pedicle through the vascular plexuses of the gingiva and the nasal floor (Fig 1-4b). 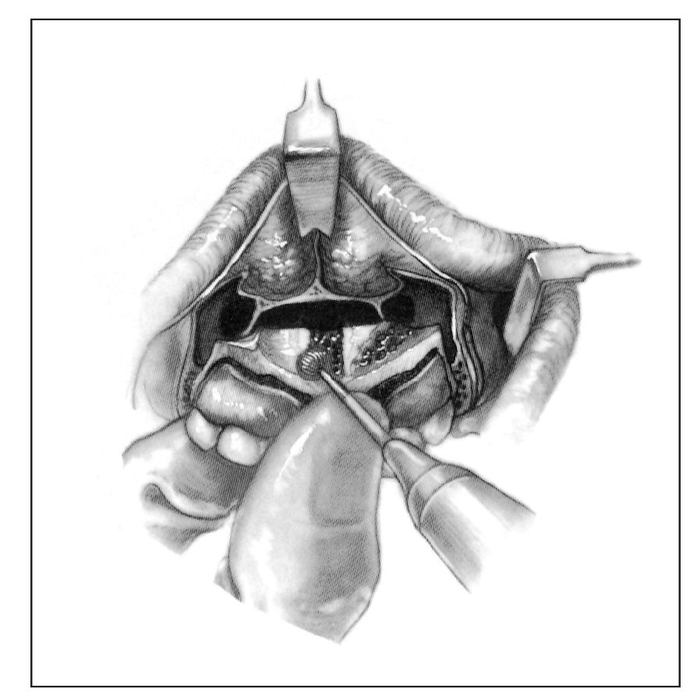 Fig 1-4a Incisions of soft tissue and bone for correction of anterior vertical maxillary excess via the Cupar technique of anterior maxillary osteotomy. (Reprinted from Bell et al21 with permission.)

Some of the clinical techniques for anterior maxillary osteotomy are difficult because the palatal bone cuts are made blindly. A transverse palatal incision26,27 affords excellent access to the hard palate for this operation14 but severs palatal blood vessels. The operation may alter the circulation to both bone and teeth and reduce the viability of the mobilized segment.14

Overall, these findings suggested that analogous clinical pedicled segmental surgeries should maintain vitality through use of osteoperiosteal flaps. Selection of the individualized surgical technique that will best avoid damage to the blood supply would be dependent on the clinical objective of the surgeon.

In 1971, Bell and Levy25 reported on the biology of wound healing in posterior maxillary osteotomies (Fig 1-5). Their microangiographic and histologic study of single-stage posterior maxillary osteotomies in adult rhesus monkeys revealed minimal osteonecrosis, transient vascular ischemia, and osseous union between most of the osteotomized segments. When the bone cuts were made away from the apices of the teeth, pulpal circulation was preserved. Within 4 weeks after the palatal surgery, the palatal mucoperiosteum was reattached to the underlying bone, as evidenced by the revascularization of the raised buccal and palatal soft tissue flaps to the underlying bone. 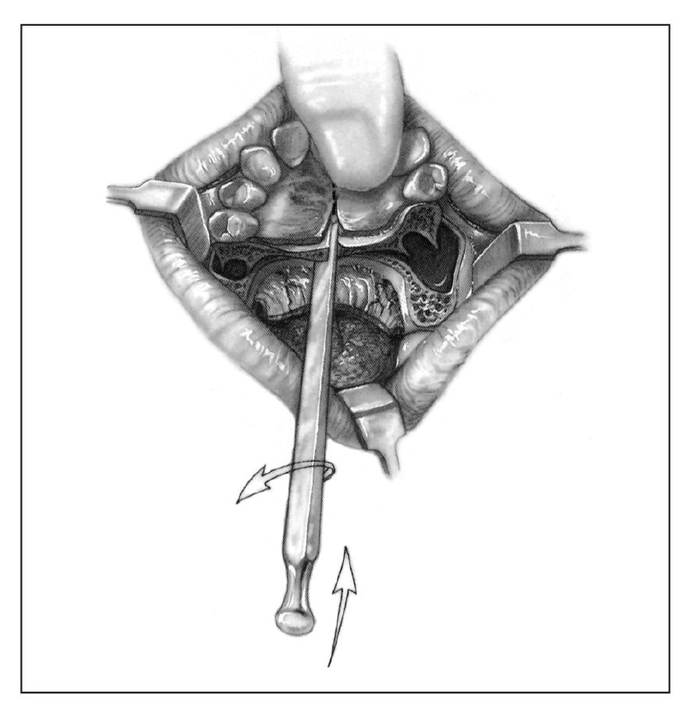 Thus, wound healing in rhesus monkeys has shown that both anterior and posterior maxillary osteotomies are a biologically sound clinical procedures when the circulation to the mobilized bone segment is maintained by attached mucoperiosteum (Fig 1-7).12,13,25 The collateral circulation occurs between osseous and soft tissue elements; intraosseous collateral circulation and vascular anastomoses are found among the periodontal, gingival, floor of the nose, and palatal plexuses (Fig 1-8). Therefore, bone and soft tissue incisions can be designed and made selectively without significantly altering the blood supply to the bone or teeth in the mobilized segment.

Figs 1-5a and 1-5b Incisions of soft tissue and bone used for posterior maxillary osteotomy in experimental animals. (Reprinted from Bell et al21 with permission.) 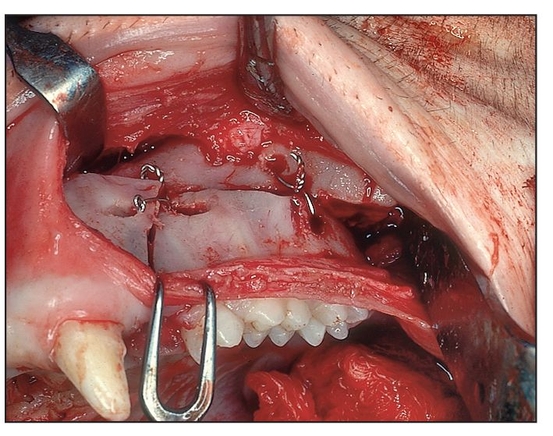 Fig 1-6 Correction of anterior open bite by posterior maxillary osteotomy (Kufner technique). (a) The soft tissue incision is retracted inferiorly to expose the interdental osteotomy site; the superior portion of the interproximal osteotomy is accomplished. (b) The medial wall of the maxillary sinus is sectioned between the palatal roots and the nasal floor with a curved osteotome. The palatal mucosa is preserved by carefully malleting an osteotome against the surgeon’s finger positioned at the horizontal-vertical juncture of the palate. The dentoaveolar segment pedicled to palatal mucosa and buccal gingiva is downfractured. Ostectomy of the superior, medial, and posterior aspects of the segment is accomplished. (c) Repositioned posterior segment is fixed to the zygomatic buttress with a suspension wire, which is ligated to an orthodontic arch wire fixed to a stable part of maxilla. (Reprinted from Bell et al21 with permission.)

Successful transposition of the maxillary dento-osseous segments by Le Fort I osteotomy depends on preserving the viability of the repositioned segment by proper design of the soft tissue and bony incisions (Figs 1-9 to 1-11). The collateral circulation within the maxilla and its enveloping soft tissues and the many vascular anastomoses in the maxilla permit numerous technical modifications of the Le Fort I osteotomy.

Vascular anastomoses between the maxilla and its enveloping soft tissues are crucial in providing compensatory blood supply to dento-osseous segments after the nutrient medullary vascular system is transsected. The normal blood supply of the maxilla originates centrifugally from the alveolar medullary arterial system29–31 (see Fig 1-8). The mucoperiosteal arterial system also gives off many branches that penetrate the cortical bone and supply blood to the maxilla (Fig 1-12). The system consists not only of capillaries but also arteries and veins, which are arranged in varied configurations.32 The multiple sources of blood supply to the maxilla and the abundant vascular communications between the hard and soft tissues constitute the biologic foundation of maintaining dento-osseous viability despite transsection of the medullary blood supply after osteotomies.32 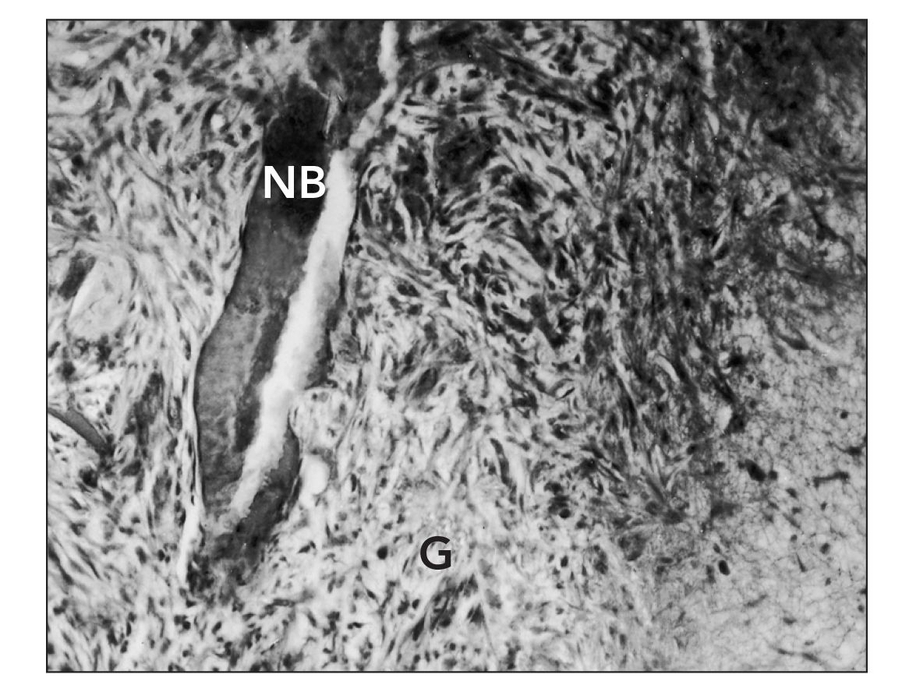 Fig 1-7a Histology showing necrosis of nonpedicled segment at 1 week. A blo/>