8 General Aspects of the Development of the Dentition

General Aspects of the Development of the Dentition

This chapter begins with an overview of the changes in the dental arches and occlusion from birth until adulthood. Subsequently, eruption, emergence, and migration of teeth are clarified. Some aspects presented in previous chapters are discussed again in a broader context.

The increase in size of the parts of the jaws that contain the teeth prior to emergence and thereafter takes place in sagittal, vertical, and transverse directions. Jaw growth does not occur at a constant rate and differs by region. From birth until 6 months of age, the jaws grow considerably, particularly in the median regions.1,2 Subsequently, there is only a limited increase in the transverse direction. Consequently, the dental arch width, as measured between left and right deciduous canines and second molars, enlarges only slightly.3–5 This limited increase in arch width applies not only to the deciduous dentition but also to later stages of development6 (see chapter 17).

The changes in arch width are partially related to the transition. For example, the distance between the deciduous canines increases as part of the process of the replacement of incisors. With the replacement of the canines, the intercanine distance enlarges slightly as the permanent canines become positioned more buccally than their predecessors, more so in the maxilla than in the mandible.

The distances between corresponding left and right deciduous molars and premolars and also between permanent molars increase gradually. This slight increase occurs more in the anterior part of the dental arch than in the posterior part, and also more in the maxilla than in the mandible. The increase in jaw height associated with facial growth contributes to the widening of the dental arch. With adequate transverse intercuspation, the mesialization of the mandibular dental arch that accompanies the anterior growth of the jaws leads to an increase in the width of the maxillary dental arch (called the rail mechanism; see video clip 22). The increase in intercanine width, associated with the transition of the incisors, can be considered as superimposed on the overall widening of the dental arches. The changes in the dental arches are illustrated in Figs 8-1 to 8-4. 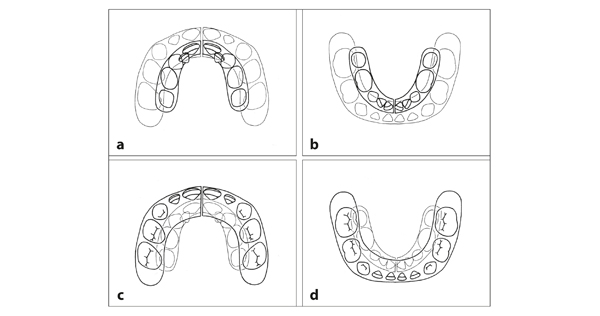 Fig 8-1 Changes in the parts of the jaws that contain the deciduous teeth, from birth (dark lines, a and b; light lines, c and d) to complete emergence (light lines, a and b; dark lines, c and d). In this period, the jaws grow considerably and space develops for the anterior teeth. The jaws grow posteriorly. The increase in width takes place mainly in the first 6 months after birth, prior to the ossification of the mandibular symphysis. The median suture in the maxilla remains open, allowing further growth in the median plane, a potential that no longer exists in the mandible. 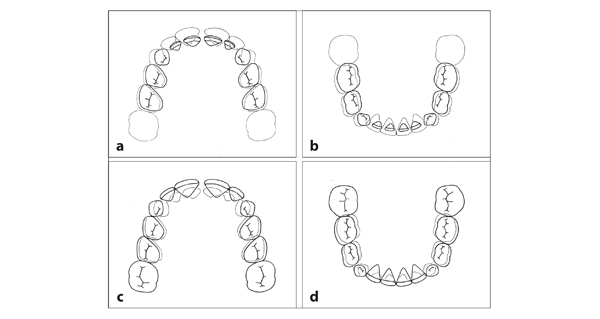 Fig 8-2 Changes in the dental arches from the complete deciduous dentition (dark lines, a and b; light lines, c and d) to the intertransitional stage (light lines, a and b; dark lines, c and d). The permanent incisors are more anteriorly located than their predecessors. The intercanine distances increase. There is also a small increase in the distance between the corresponding left and right deciduous molars. The first permanent molars are added to the dental arch. The diastemata in the posterior regions decrease, and the distal surfaces of the second deciduous molars move mesially. 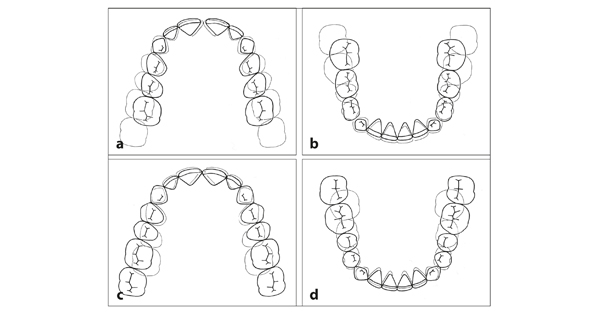 Fig 8-3 Changes in the dental arches from the intertransitional stage (dark lines, a and b; light lines, c and d) to the complete permanent dentition (except third molars) (light lines, a and b; dark lines, c and d). The permanent canines and premolars attain a more buccal position than their predecessors. The first permanent molars, particularly in the mandible, migrate mesially. This migration is facilitated by the differences in mesiodistal crown dimensions between the premolars and their predecessors and by the closure of diastemata. The second permanent molars are added to the dental arch. 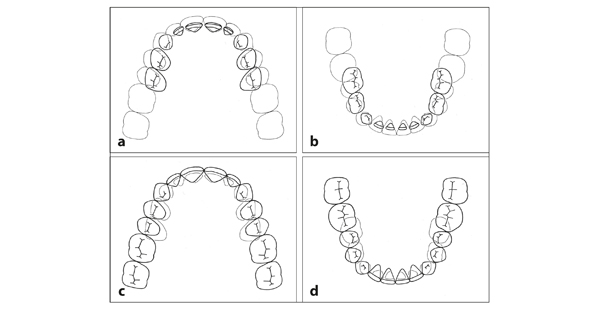 Fig 8-4 Changes from the deciduous dentition (dark lines, a and b; light lines, c and d) to the complete permanent dentition (except third molars) (light lines, a and b; dark lines, c and d). The anterior parts of the dental arches show only a small increase in size. The widening of the posterior regions is greater in the maxilla than in the mandible. This difference is related to the mesial advancement of the mandibular arch in relation to the maxillary arch (ie, the rail mechanism). The extension with the first and second permanent molars results in lengthening of the dental arches to the posterior.

Changes to the Occlusal Plane

The deciduous dentition has a flat occlusal plane. There is no or only a slight overbite. After the transition, the permanent incisors erupt more than their predecessors. This results in an overbite (ie, overlap in height of the maxillary incisors over the mandibular incisors). For an adult dentition, an overlap of one-third of the clinical crown height (ie, the part of the crown that is visible in the mouth) of the mandibular central incisors is considered normal. The overbite is somewhat greater in the intertransitional period, as is the associated overjet.7–9 In the second transitional period and particularly during adolescence, the labial inclination of mandibular and maxillary incisors decreases, and the overbite and overjet (ie, distance between the anterior side of the incisal margin of the maxillary central incisor and the labial surface of the mandibular central incisor) reduce10–13 (see video clip 7).

After the permanent incisors are fully erupted, the occlusal plane is no longer flat; the curve of Spee is formed. The curve of Spee is the imaginary curve that is formed by the buccal cusps and incisal edges of the teeth in one arch. In the mandible, this curve is slightly concave, with the incisors more occlusally positioned than the other teeth. In the maxilla, the curve is slightly convex. The curve of Spee arises with the emergence of the mandibular permanent incisors and first molars, increases with the emergence of the second molars, and stabilizes in the permanent dentition.8

The posterior position of the mandible in relation to the maxilla, present in the newborn, disappears largely during the first year of life as the mandible grows more anteriorly than the maxilla. This difference in anterior growth continues in a small measure until adulthood. The mandibular teeth gradually attain a slightly more anterior position in relation to the maxillary ones, which contributes to an improvement of the first molar occlusion. With a flush terminal plane, the largest improvement takes place after the mandibular second deciduous molars are exfoliated and the first permanent molars migrate to the mesial. The third factor involved in attaining the final molar occlusion is the mesial closure of the diastemata in the mandibular dental arch, particularly the diastema between the deciduous canine and the first deciduous molar, in which the maxillary deciduous canine fits.14

Alterations over the Life Span

After the permanent dentition is complete, small changes in tooth position, occlusion, and arch width dimensions continue to take place. Well-aligned mandibular anterior teeth may become irregular; existing irregularities may worsen.15–17 In general, the dentition shows slight alterations during the total life span. That is not surprising, as the potential to adapt to alterations in the skeleton and in functional conditions is always present. However, with increasing age, the changes become smaller.18–20

At a certain developmental stage, forming teeth begin to move occlusally. In that process, a distinction is made between eruption and emergence. Eruption refers to the movement of teeth toward the occlusal plane, from their initial location in the jaws to their functional position in the mouth. The term emergence applies to the piercing of the surface and may be distinguished as the penetration of either the alveolar occlusal bone or the gingiva.

The eruption process is divided into two phases: prior to emergence and thereafter. The potential for eruption and displacement of teeth remains throughout an individual’s lifetime, as long as the periodontium stays intact. In addition, fully occluding teeth continue to erupt when facial height increases,21 and eruption occurs to compensate for the attrition of occlusal surfaces in adults.22 However, when a bony connection develops between the root and the alveolar socket (ie, ankylosis), eruption can no longer occur.

A tooth germ develops inside a follicle. The increase in length of a developing tooth occurs mainly by dentin deposition in an apical direction. The contribution of enamel deposition in an occlusal direction is limited. The root end, where growth mainly occurs, migrates initially in an apical direction, while the coronal part moves occlusally. Because both displacements occur at about the same speed, the tooth germ itself remains in the same place. At that point, bone resorption occurs at the apical as well as at the occlusal side. When active eruption starts, the tooth bud starts to move occlusally. The rate of apical lengthening of the root stays more or less the same during the whole period of its formation and is slower than the rate at which the tooth bud moves occlusally. Consequently, bone is deposited at the apical side to fill up the otherwise growing open space. Indeed, the start of active eruption coincides with the reversal from bone resorption to bone apposition at the apical side—the first reversal point. When the tooth has reached its functional position, active eruption stops. Because the root is not completed yet, the end of the forming root again moves apically, with corresponding bone resorption—the second reversal point. As the root formation is concluded and facial growth is still going on, the associated passive eruption is accompanied by bone apposition near the apex—the third reversal point.

Permanent teeth erupt in the direction in which they are formed.23 After emergence, they become affected by functional factors such as the pressure of the lips, cheeks, and tongue and contact with antagonists, which alter the direction of their eruption. The eruption direction of deciduous molars, premolars, and permanent molars is guided by the cone-funnel mechanism when occlusal contact is reached.

Unlike premolars and molars, incisors and canines are not fixed three-dimensionally by the occlusion. Their eruption is slowed down by the contact established between the antagonists and through the soft tissues on which they rest. In that way, the lower lip contributes to the slowing down and stopping of the eruption of maxillary incisors.

The eruption direction after emergence also depends on the space available in the dental arch. With a shortage of space, an erupting incisor or canine will deviate to the lingual or labial. On the other hand, the situation can improve spontaneously if extra space is created. Extraction of a deciduous canine can provide space for a lateral incisor that otherwise could not emerge within the dental arch. Prior to emergence, it may be evident that the shortage of space is so severe that the permanent canine and two premolars cannot be adequately arranged next to each other in the dental arch. In such an extreme case of space shortage, if the first premolar is removed before or after its emergence, the adjacent teeth can attain a better position prior to emergence. The serial extraction and simultaneous extraction procedures are based on this phenomenon.24–26 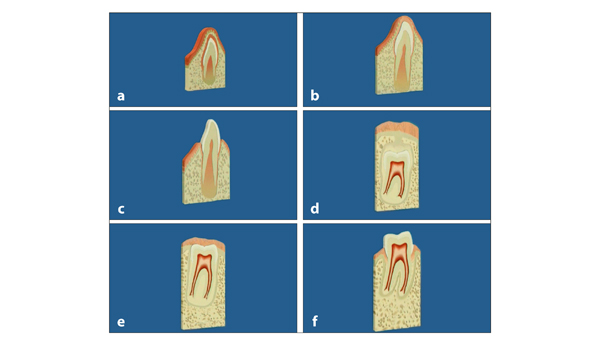 The eruption of premolars is preceded by resorption of the roots of corresponding deciduous molars and the bone between and around their roots. Because premolars have smaller crowns than their predecessors, little bone has to be r/>