The aim of this chapter is to review those aspects of occlusion of relevance to provision of crowns.

After this chapter the reader will understand the importance of occlusion in making crowns.

The term occlusion conjures up an image of a static relationship with the upper and lower teeth in contact. Whilst this relationship is important, the way in which the teeth move over one another in excursive movements is equally important. The occlusion and articulation of the teeth should be in harmony with the temporomandibular joints and muscles of mastication. This does not mean that dentitions should be restored to a stylised version of a balanced occlusion. By virtue of periodontal mechanoreceptors and proprioceptors patients adapt to considerable variations in the “ideal” occlusion. Patients also adapt to changes made to their occlusion. However, this adaptive capacity cannot be quantified or predicted. If changes are made to the occlusion, these should be in a planned and well controlled way.

Most indirect restorations should be made to conform to the existing occlusion in such a way that they are functional and do not introduce occlusal interferences – the so-called “conformative approach” to restorative dentistry. When more advanced restorative work is undertaken and the occlusal relationship is altered; this is called a “reorganised approach”.

When a patient is asked to close, the teeth will normally be brought into intercuspal position (ICP). This occurs as a result of a learnt pattern of closure, influenced by afferent feedback from periodontal mechanoreceptors. The ICP is the jaw relationship when the upper and lower teeth are in maximum intercuspation (Fig 7-1). When the jaw is in this position, it is important to evaluate the occlusal vertical dimension and whether the occlusion is stable. 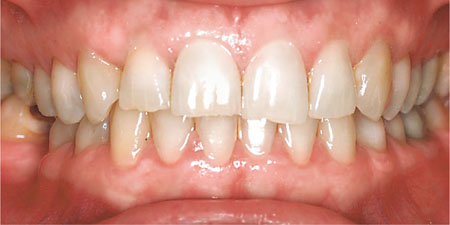 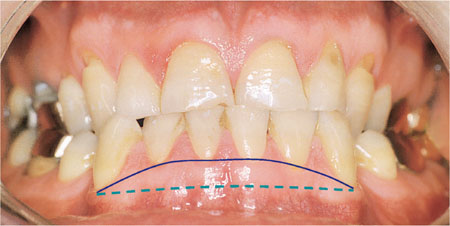 Fig 7-2 Localised tooth wear has caused dentoalveolar compensation with maintained tooth contact as the teeth became shortened. The gingival level in the lower anterior region has risen and become bowed with the compensation.

A stable occlusion is one in which there is no potential for overeruption, drifting or tilting of the teeth. In the patient in Fig 7-3a–g, early loss of the lower first permanent molar led to mesial tilting of the lower second molar and overeruption of the upper first molar as this tooth was unopposed. This led to an occlusal interference. Therefore, if teeth are extracted, it is important to remember to assess whether the occlusion is unstable and, if so, to consider early replacement of the lost teeth with a fixed or removable prosthesis. If a decision is made not to replace teeth, then monitoring of tooth movement can be carried out with the aid of dated study casts. This allows planned management of the occlusion (Fig 7-3b–g). 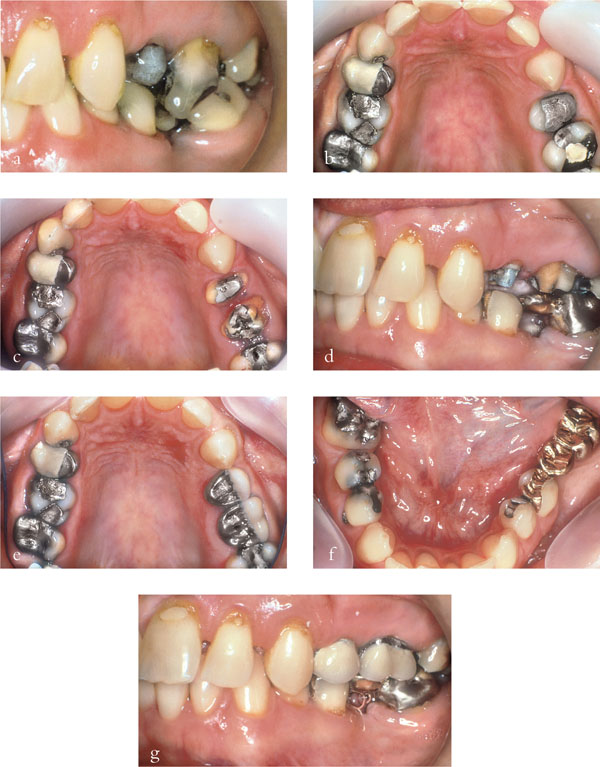 Fig 7-3 (a–g) Early loss of the lower molar tooth has led to an unstable occlusion, with tilting, drifting and overeruption of teeth into the space (a). To eliminate the resultant occlusal interference and create an acceptable occlusion, the upper first permanent molar was elective root treated as extensive occlusal reduction was required (b). This allowed preparation of the teeth for metal-ceramic crowns (c and d) and placement of a fixed movable bridge in the lower arch (e and f) and the completed restoration (g).

The terminal hinge axis position is where the condyles of the mandible are in their most superior and posterior position in the glenoid fossa. If an imaginary axis is drawn through the centre of each condyle (Fig 7-4a–c), pure rotation of the mandible occurs for the first 20 mm on opening (Fig 7-4b). The first tooth contact, when the mandible is in the terminal hinge axis position, is called the retruded contact position (RCP) or centric relation. In over 90% of dentate patients RCP and ICP (centric occlusion) do not coincide. There is usually an anterior and superior slide of approximately 2 mm between the two positions (Fig 7-4b and Fig 7-5a–c). When adopting a conformative approach, it is important that restorations do not interfere with this slide.

Fig 7-4 (a–c) An axis drawn through the head of each condyle is shown in Fig 7-4a. When the condyles are in the most posterior and superior position in the glenoid fossa, the mandible is said to be in the terminal hinge axis position (THA). If an imaginary stylus is placed between the lower central incisor teeth and viewed laterally (Fig 7-4b) the first 20 mm or so of opening involves rotation of the mandible or hinge opening (HO) around the THA.

On further opening, the condyles slide downwards and forwards onto the articular eminence until maximum opening (MO) is reached. The first tooth contact when the mandible is in the THA position is called the retruded contact position (RCP). In most dentate patients (>90%) there is an anterior and upward slide into intercuspal position (ICP). On protrusion the anterior teeth guide the mandibular movement – so called anterior guidance (A).

The degree of guidance will depend on the incisal relationship (Fig 7-4c). The teeth remain in contact in maximum protrusion (P). The movement of the mandible dictated by the teeth (RCP-ICP-A-P) and the musculature, ligaments and skeleton (RCP-HO-MO-P) traced in the sagittal plane (Fig 7-4b) is called Posselt’s envelope of movement.