7 – Communication with the Patient

COMMUNICATION WITH THE PATIENT

This has been discussed under Initial Communication in Chapter 3.

It is important to ensure that, when the patient leaves the discussion they are aware of the following:

The procedure follows that described previously. A treatment planning card is filled out, ensuring adequate time is allowed for each appointment. The estimate card is filled out and the estimated fee calculated, together with the method of payment. This is then given to the secretary who uses a preprinted standard form, or a computer generated standard form (Fig 7-1). The details for each patient are entered on this form. The form is produced in triplicate and if proceeding with treatment the patient is asked to sign it. Standard forms can be self-carbonating or produced in triplicate on the word processor. One copy is given to the patient, one copy is attached to the treatment plan, and one copy is placed in a file which consists of estimates given but not yet accepted. When the patient makes a decision regarding treatment this copy is removed. Therefore, at any time, by looking at the estimate file, it is possible to see to whom estimates have been given, how long they have been outstanding and how many are outstanding. However, if the patient elects to make appointments there and then, which often occurs, the outstanding estimate copy is not filed. 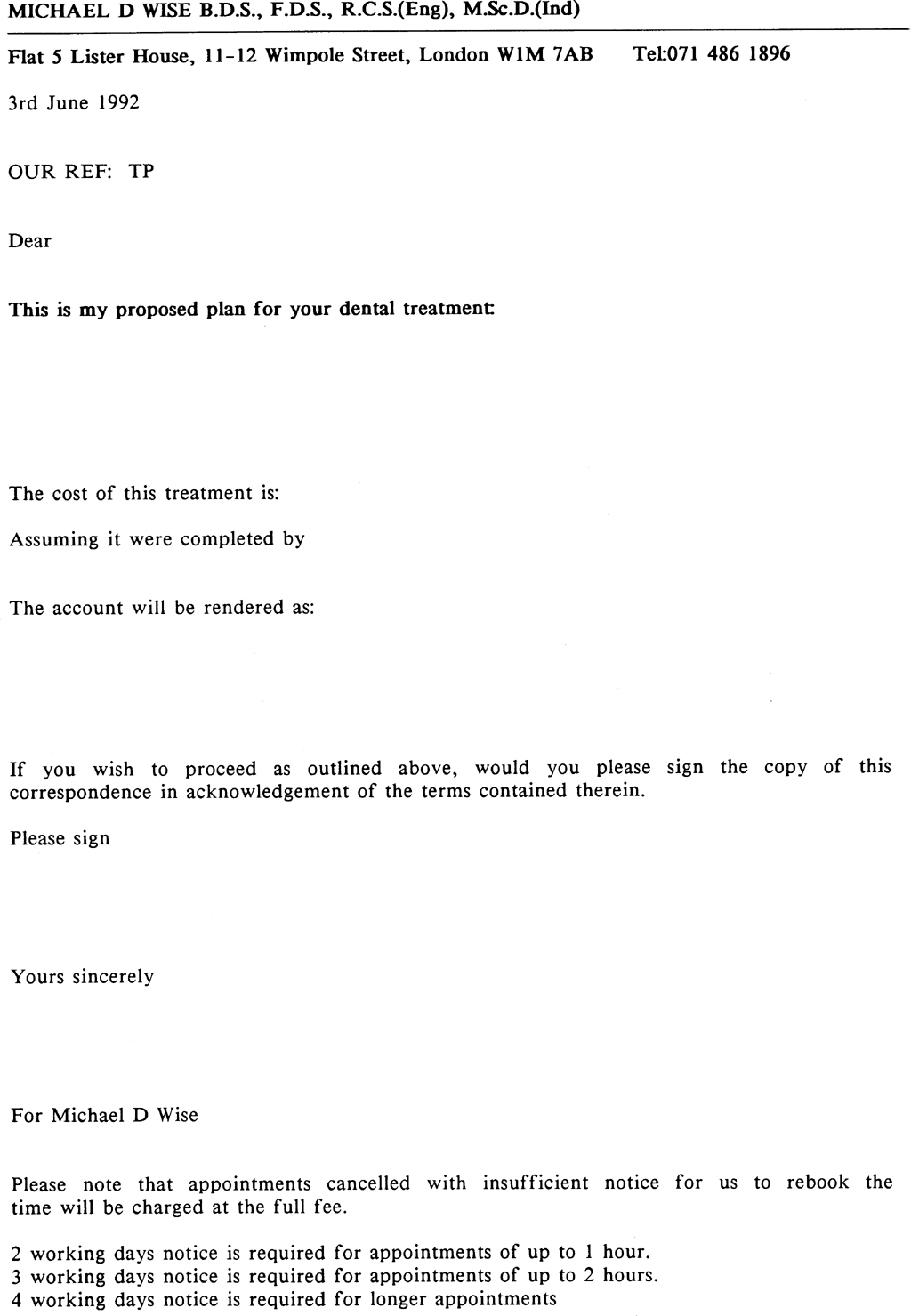 Fig. 7-1 Standard letter form for estimate. The details are completed on the word processor and a copy given to the patient.

This consists of correspondence sent to the patient following treatment planning. The correspondence should be carefully planned and to do this it is necessary to have a check list to ensure that each aspect has been considered, although not necessarily included for every patient. The main aspects which should be included are:

The introductory letter usually commences with:

Further to your recent dental appointment, I thought that I should confirm the main points of our discussion,

I have now had the opportunity to consider the findings of my examination in more detail.

The main points for this section of the correspondence are that it should:

(i)  I note that considerable wear has taken place on your upper front teeth. This has resulted in thinning of the enamel (the outer layer of the tooth). Several of the teeth which are heavily restored with amalgam fillings are considerably weakened, due to the presence of unsupported remaining tooth structure.

(ii)  There was generalized inflammation in your gums but this was superficial, the support of the teeth was, in fact, good. However, there was some malalignment between the bite of the upper and lower teeth, leading to very heavy loads being placed upon several of the supporting teeth of the upper bridge. The porcelain on these teeth has fractured and two of the crowns are uncemented from the underlying tooth structure.

The main points are, that the correspondence should stress that:

Essentially treatment needs to be divided into three stages. Within each stage there would be a series of appointments.

There are several directions in which future treatment could proceed. It may be possible to re-restore your teeth with fixed bridgework, however, it may be necessary to extract some teeth such that the only feasible restoration would be a removable denture.

Progress from One Stage to the Next

New Decision at the End of Each Stage

Based upon the findings of each stage, a new decision would be made regarding the content of the next stage.

Interim Stability within Each Stage

Each stage would be designed such that your teeth would be in a state of relative stability. As such it is necessary to schedule all of the appointments to take you to this point, so that we can maintain control.

The main points to be included when assessing the time schedule involved in the treatment are:

It is important that the patient really understands the fee structure, so that there can be no argument at a later date. The correspondence should include the following:

I am not able at this stage to give an overall estimate for definitive restoration, since due to the complexities of the problems, it would be difficult to calculate the various possibilities. However, for your guidance, you should be aware that similar cases treated over the last two years have involved fees in the region of …. I give you this figure so that you are able to understand the sort of total commitment into which you could be entering should you proceed with treatment.

The estimated fee for the first stage of treatment, assuming it were completed by … is …. Our system of accounting would be one third at commencement, 50% at an interim stage (the date would be given to you) and the balance on cementing of the provisional bridgework.

The estimated fee for the second stage is …, assuming this were completed by … and accounts would be rendered on a monthly basis. To this must be added the fees due to the endodontist (tooth nerve specialist) which I would anticipate to be in the region of … per tooth. From the X-rays it appears that at least three teeth require such treatment, although it is possible that up to six could require treatment. The fees of the periodontist (gum specialist) would be in the region of …, but you must obtain estimates directly from these specialists. I only give you these figures as a guide.

The estimated fee for the third stage of treatment, assuming it were completed by … is …. Our system of accounting would be one third at commencement, 50% at an interim stage (the date would be given to you) and the balance on cementation of the definitive bridgework.

Since at least 1916, when a New York oral surgeon was sued for extracting a patient’s third molar without the patient’s permission,1 claims of lack of informed consent have appeared repeatedly in law suits involving dentists in the U.S.A. The doctrine of informed consent requires health care providers in the U.S.A. to inform patients of the nature of the proposed treatment, the benefits and risks of such treatment and the benefits and risks of the alternative to treatment, including non-treatment.1 In a professional liability suit based on informed consent, “the plaintiff patient must be able to prove, by a proponderance of the evidence (more likely than not), that the dentist had a duty to disclose certain information; that the dentist failed to provide the information; that the patient would not have consented to the treatment had full disclosure been made; and that the patient suffered an injury as a result of the dentist’s failure to inform”.2 It has been accepted that currently, the American doctrine does not apply to the U.K.3 In the U.K. the Bolam Test has been upheld by a majority of Law Lords. In 1957, in a case (Bolam v. Friern Hospital Management Committee), Mr Justice McNair directed a jury that “a doctor is not guilty of negligence if he has acted in accordance with a practice accepted as proper by a responsible body of medical men skilled in that particular art, merely because there is a body of opinion that takes a contrary view. At the same time, that does not mean that a clinician can obstinately persist with some traditional technique if it has been proved to be contrary to what is really substantially the whole of informed medical opinion.” In another case, in 1985 (Sidaway v. The Bethlem Royal Hospital and Maudesley Health Authority) which was brought before the Law Lords, they generally upheld the Bolam Test but with some qualification, namely, that expert evidence of what is accepted and responsible medical practice is not necessarily conclusive and that there may be circumstances in which the necessity to disclose is so obvious that the court should exercise its own judgement, irrespective of dental or medical opinion.3

The American doctrine of “informed consent” is not recognized in English law, but it is doubtful whether the last has been heard of the “prudent patient test” as defined by Lord Scarman – the doctor must disclose all “material risks”. What risks are “material” is determined by the “prudent patient” test: a risk is material when a reasonable person in what the physician knows or should know to be the patient’s position, would be likely to attach significance to the risk, or cluster of risks, in deciding whether or not to forgo the proposed therapy. This was opinion, not law. Lord Bridge’s opinion in the same case (Sidaway v. The Bethlem Royal Hospital and Maudesley Health Authority) was that the degree of disclosure of risks must primarily be a matter of clinical judgement and that the issue of whether non-disclosure in a particular case should be condemned as a breach of the doctor’s duty of care was to be decided primarily on the basis of expert evidence applying the Bolam Test.

He added: “I am of the opinion that the judge might, in certain circumstances, come to the conclusion that diclosure of a particular risk was so obviously necessary to an informed choice on the part of the patient, that no reasonably prudent medical man could fail to make it.”3

“If questioned specifically by a patient of apparently sound mind about risks involved in a particular treatment, the doctor has a duty to answer truthfully and as fully as the questioner requires.” This was stated unequivocally by Lord Bridge.

The Sidaway case arose out of an incident of neurosurgery, but the principles underlying the House of Lord’s decision would be equally applicable to other forms of treatment, medical and dental. A general practitioner faced with the problem of how much to tell a patient about the side effects of a drug he is proposing to prescribe, should be guided by his conscientious clinical judgement in the light of all the circumstances and, in particular, his knowledge of the patient and what he conceives to be a practice accepted as proper by a reasonable body of competent and experienced general practitioners.3

Thus, the professional interpretation varies from country to country and the reader must ensure that he is cognizant of the requirements within his own country.

Tags: Failure In the Restored Dentition Management and Treatment
Jan 17, 2015 | Posted by mrzezo in Prosthodontics | Comments Off on 7 – Communication with the Patient
Premium Wordpress Themes by UFO Themes
WordPress theme by UFO themes