5 The Second Transitional Period: Transition of Canines and Deciduous Molars/Premolars and Emergence of Second Permanent Molars

The Second Transitional Period: Transition of Canines and Deciduous Molars/Premolars and Emergence of Second Permanent Molars

The second transitional period lasts 1 to 1.5 years. At about 10 years of age, 2 years after the emergence of the maxillary lateral permanent incisors, the first tooth, usually a mandibular deciduous canine, is shed. In contrast to the predictable emergence sequence of the permanent incisors, a large variation exists in the sequence of emergence of permanent canines and premolars. The spatial conditions in the anterior region allow only one eruption sequence for incisors. There is more space for the not-yet-emerged permanent teeth in the buccal region, and they can be arranged with space in between. However, the maxillary permanent canine is often situated close to and above the first premolar, in which case the premolar emerges first. The distal corner of the canine lies next to the first premolar at the junction of its crown and root. The maxillary first premolar has a corresponding concavity at its mesial side. The second premolar has no such concavity and not two roots but only one; otherwise, the crowns of the premolars are alike in shape and size. 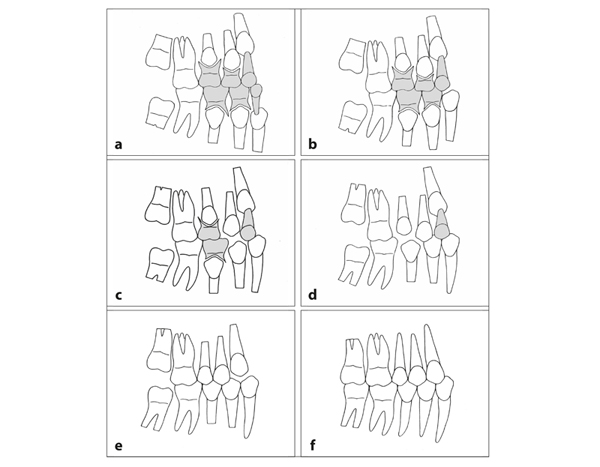 There is a large variation in the age at which permanent teeth emerge. There is a range of 3 years for the incisors and 6 years for the canines and premolars. Sequences and times of emergence can differ between the left and right sides. Furthermore, the transition in the mandible precedes that in the maxilla. Generally, the second permanent molars erupt when all deciduous teeth, with the exception of the mandibular second deciduous molar, have been replaced (Fig 5-2). 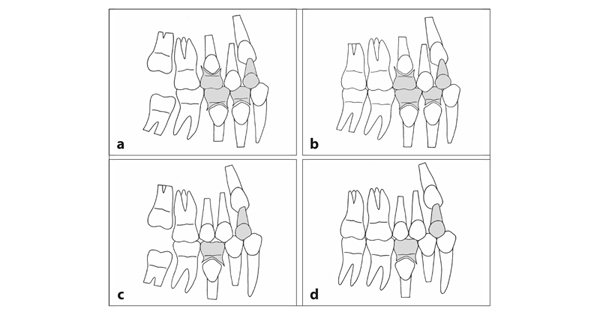 Deciduous molars have mesiodistally larger crowns than do their successors. The reverse holds true for canines. Permanent canines are broader than their predecessors, particularly in the maxilla, and more in boys than in girls. The extra space needed for their replacement is usually available because of the presence of diastemata.

In this context, the term leeway space, introduced by Nance in 1947, should be mentioned.9 Leeway space refers to the difference between the combined widths of the deciduous canine and first and second molars and that of their successors. According to Nance, the average difference for a maxillary quadrant is 1.0 mm and for a mandibular quadrant 1.7 mm (see chapter 17, Fig 17-10). However, there is a large range for these values. The leeway space offers, together with the remaining diastemata, the extra space needed for good alignment of the canines and premolars in the dental arch. With excess space, the first permanent molars can move mesially, especially in the mandible, resulting in improved intercuspation.

Size of the Middle Section of the Apical Area

Tags: Development of the Human Dentition
Jan 4, 2015 | Posted by mrzezo in General Dentistry | Comments Off on 5 The Second Transitional Period: Transition of Canines and Deciduous Molars/Premolars and Emergence of Second Permanent Molars
Premium Wordpress Themes by UFO Themes
WordPress theme by UFO themes