32 The development of the face, palate, and nose

32
The development of the face, palate, and nose

The first pharyngeal arch, the mandibular arch, is one of the basic building blocks needed to form the face and associated structures. The other major building block is the frontonasal process that covers the developing forebrain (see Section 19.3).

The development of the face begins after the first pharyngeal arch forms around four weeks post-fertilization. At this stage, the head consists of a large bulge over the developing forebrain, approximating to the forehead and the mandibular arch in the position of the lower jaw. A slit between the frontonasal process and mandibular arch is continuous with the foregut tube; this slit is the primitive oral cavity or stomodeum. This primitive mouth cavity has no side walls where the cheeks would be and more significantly, there is no nasal cavity.

Development of the nasal and oral cavities internally and the face externally proceeds at the same time over the course of the next eight weeks of development. Essentially, the nasal cavity is formed, then divided into two and separated from the oral cavity by the palate. The sequence of events is:

• Development of the nasal cavity and first part of the palate, beginning the separation the oral and nasal cavities;

• Development of the maxillary arch from the mandibular arch to form the cheeks and important structures contributing to the palate;

• Completion of the components required to form the palate and separate the nasal cavity into right and left cavities;

32.2 Formation of the nasal cavity and palate

32.2.1 Formation of the primary nasal cavity and primary palate

As you can see in Figure 32.1A, the stomodeum is roofed by the frontonasal process and its floor is the fused mandibular arches. Notice how the first arch is pushed upwards by the cardiac bulge formed by the precociously developing heart. At first, the stomodeum is closed posteriorly by the buccopharyngeal membrane, one of the two places where ectoderm and endoderm meet without intervening mesoderm (see Chapter 8, p. 55). This membrane ruptures at about the end of the third week post-fertilization and the stomodeum becomes continuous with the foregut—the future pharynx.

Figure 32.1B shows two ectodermal thickenings called the nasal placodes in the ectoderm, covering the frontonasal process just above the stomodeum; they develop towards the end of the fourth week of development. The nasal placodes will eventually form the olfactory epithelium in the roof of the nasal cavity. During the fifth week, the placodes sink into the underlying ectomesenchyme by a combination of growth of the frontonasal process outwards around the placodes and the invagination of the placodes themselves. The placodes are now located in the floor of two shallow depressions, the nasal pits. As illustrated in Figure 32.1C, tissues are built up on either side of each nasal pit to form the medial and lateral nasal processes. The medial nasal processes fuse together to form the intermaxillary segment of the frontonasal process which contribute to the middle portion of the nose, the philtrum of the upper lip, and the part of the upper jaw bearing the four maxillary incisors and forming the primary palate. The lateral swellings only form small areas of the lateral parts of the external nose. 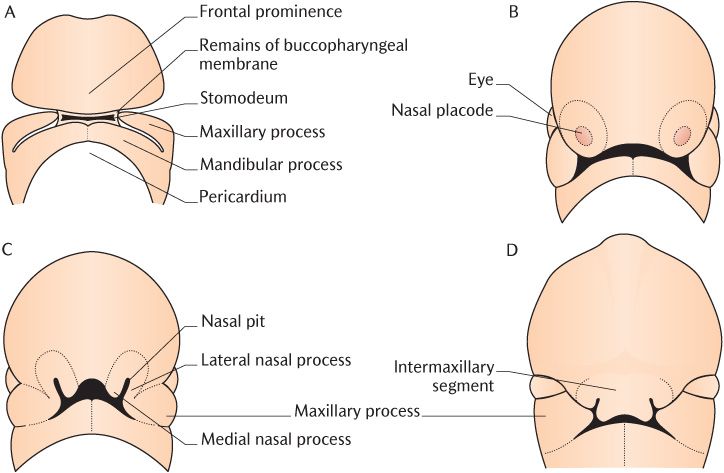 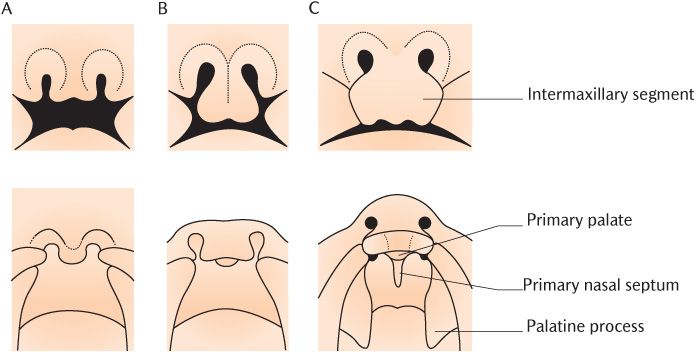 Fig. 32.2 Development of the primary palate and primary nasal septum. 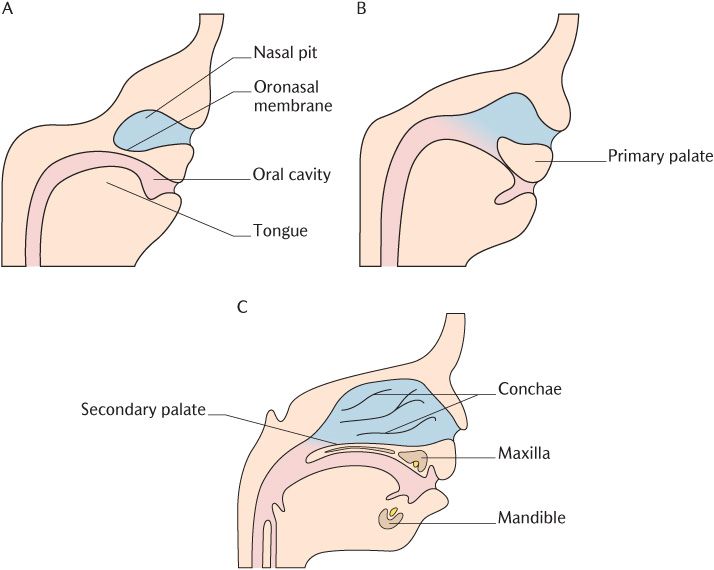 Fig. 32.3 Lateral views of the development of the nasal and oral cavities.

As the nasal pits push into the frontonasal process, they do not move backwards in a straight line. Instead, they converge towards the midline. The area of tissue between them is the primary nasal septum, forming the first component of the nasal septum. As you can see on the frontal view in Figure 32.2B, the intermaxillary segment below the nasal pits is quite bulbous and extends under the pits. The corresponding intraoral view on the second row of Figure 32.2B shows that the intermaxillary segment forms a horizontal triangular shelf with its apex directed posteriorly; this is the primary palate and the first component />

Tags: Anatomy for Dental Students 4e
Jan 3, 2015 | Posted by mrzezo in General Dentistry | Comments Off on 32 The development of the face, palate, and nose
Premium Wordpress Themes by UFO Themes
WordPress theme by UFO themes