12 The heart, pericardium, and mediastinum

12
The heart, pericardium, and mediastinum

The heart, the arteries and veins leaving and entering the heart which are usually referred to as the great vessels, the trachea and bronchi, the oesophagus, and the vagus and phrenic nerves and sympathetic chains occupy the mediastinum, the area in the middle of the thoracic cavity between the two pleural sacs. The anteroposterior dimension of the thorax is narrowest in the mediastinum because of the presence of the thoracic vertebrae posteriorly. Laterally, the pleural sacs enclosing the lungs extend much further back alongside the vertebrae in the areas known as the paravertebral gutters.

The great vessels enter and leave the superior aspect of the heart. The large veins draining the head, neck, and arms lie most superficially; they unite to form the superior vena cava that enters the right atrium of the heart. These veins overlie the two large arteries exiting the heart, the aorta, and pulmonary trunk. The aorta has a short ascending part, then forms the aortic arch passing backwards and to the left before continuing down the posterior wall of the thorax as the descending thoracic aorta. The subclavian and common carotid arteries, supplying blood to the arms and head and neck, respectively, arise from the aortic arch. The oesophagus is the deepest structure lying on the vertebrae and the trachea and main bronchi lie superficial to it. The sympathetic chains lie lateral to the vertebral bodies and the vagus and phrenic nerves are in intermediate positions. All these structures will be described in more detail in the rest of this chapter. 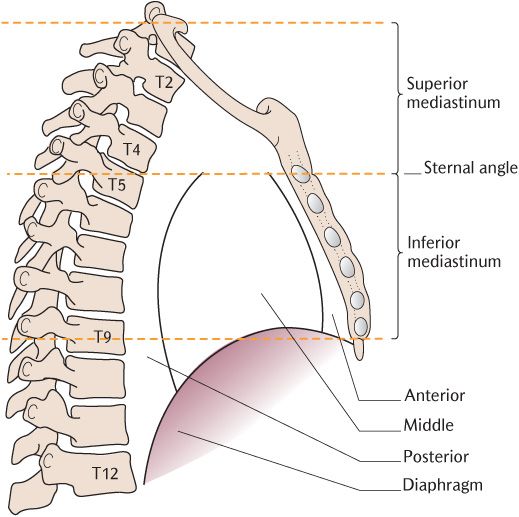 Fig. 12.1 Divisions of the mediastinum.

The inferior mediastinum is further divided into three parts as shown in Figure 12.1:

• The anterior part between the sternum and fibrous pericardium;

• The large middle mediastinum containing the heart enclosed in the pericardium and the roots of the great vessels;

• The posterior part between to the fibrous pericardium and thoracic vertebrae.

Figure 12.2 shows the important contents of the superior mediastinum. From anterior to posterior they are: the superior vena cava and brachiocephalic veins, phrenic nerves, branches of the aortic arch, vagus and left recurrent laryngeal nerve, trachea, oesophagus, and sympathetic trunks.

Fig. 12.2 Structures in the superior mediastinum at the level of the first rib. 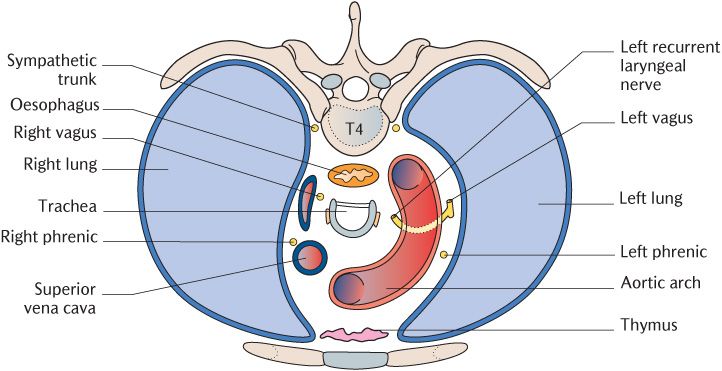 Fig. 12.3 Structures at the junction of the superior and inferior mediastinum at the level of T4.

The important contents of the inferior mediastinum are shown in Figure 12.3. The anterior mediastinum contains the thymus gland. The middle mediastinum contains the pericardium and heart inferiorly and the great vessels entering and leaving the heart superiorly. The vagus and phrenic nerves lie in an intermediate position. The trachea dividing into the right and left bronchi lies more posteriorly. The major structures in the posterior mediastinum are the oesophagus, descending thoracic aorta, and sympathetic chains. Note that the aorta, trachea, oesophagus, and vagus nerves all pass through more than one mediastinal division.

Inflammation of the pericardial sac (pericarditis) produces severe substernal pain. Pericarditis may follow bacterial or viral infection or may also be a sequel to rheumatic fever. Rheumatic fever usually follows about three weeks after throat infections by streptococcal bacteria and produces rheumatism-like symptoms of joint ache and pain, hence its name. Although rheumatic fever is now uncommon in developed countries, it is still prevalent in developing world where 5- to 15-year-olds are most frequently affected.

Pericarditis is frequently accompanied by the production of excess serosal fluid (pericardial effusion) which may be copious enough to compress the pulmonary veins and interfere with the action of the heart. Acute pericarditis often produces a pericardial rub similar to the pleural rub described in Box 11.1. A wound penetrating the pericardium commonly injures the heart wall, causing bleeding into the pericardium, again compressing the heart and interfering with its efficient function.

Fluid may be drained from the pericardial sac via a wide bore needle inserted through the fifth or sixth intercostal space near the sternum.

The pericardium conforms to the external surface of the heart, although allowing free movement of the muscular walls of the ventricles and atria. The fibrous pericardium blends with the connective tissue outer layers of the walls of the great vessels, not very far from their roots, and is firmly attached to the central tendon of the diaphragm and the anterior chest wall by fibrous ligaments which help to anchor the heart. The heart is also indirectly anchored by its vessels, especially by the pulmonary veins entering the lungs. Box 12.1 outlines the effects of disease on the pericardium.

The heart consists of four chambers, the right and left atria and the right and left ventricles. The chambers are arranged as two chambers in series on each side, the atria above the ventricles, as shown in Figure 4.1. Essentially, the heart consists of two parallel pumps, the right atrium and ventricle receiving deoxygenated blood from the systemic circulation and pumping the deoxygenated blood via the pulmonary trunk to the lungs where gaseous exchange takes place and blood is oxygenated. Oxygenated blood returns to the left atrium of the heart, passing to the left ventricle where it is pumped via the aorta through the systemic circulation to supply the tissues with oxygen and other nutrients. Valves guard the orifices between the atria and ventricles and the ventricles and the pulmonary trunk and aorta to prevent backflow of blood as pressure changes occur in the chambers and vessels.

Blood returns continuously to both sides of the heart from the circulatory system when the ventricles relax (diastole). The atrioventricular valves open as the atria contract and blood flows into the ventricles. When the ventricles are nearly full, the next cycle of cardiac contraction (systole) begins. The ventricles contract in a wave which passes upwards from the apex of the heart towards the aortic and pulmonary openings. The resultant increase in pressure closes the atrioventricular valves and prevents regurgitation of blood into the atria. Because these valves are closed, returning blood accumulates in the large veins and atria. Once the intraventricular pressure exceeds that in the large arteries, the semilunar valves at the exits into the aorta and pulmonary trunk are forced open and blood is ejected from the heart. As soon as the contraction ceases, the intraventricular pressure drops below that of the great vessels and the semilunar valves close. Further relaxation lowers ventricular pressure to below that of the atria, now refilled from the general and pulmonary circulation and the atrioventricular valves open as the cycle begins again.

12.4.1 The general arrangement of the heart chambers and great vessels

After gaseous exchange in the lungs, oxygenated blood returns from the lungs via the four pulmonary veins to the left atrium situated on the posterior side of the heart. These vessels can be seen in Figure 12.5. Internally, the left and right atria are separated by the atrial septum. Blood passes from the left atrium through the left atrioventricular (mitral) valve to the left ventricle which lies posterior to the right ventricle. The two ventricles are separated internally from each other by the interventricular septum. Blood leaves the left ventricle via the aortic valve to enter the systemic circulation via the aorta which runs at first upwards and then curves backwards over the bifurcation of the pulmonary trunk. Note the relative positions of the two major arteries in Figure 12.4—the aorta lies to the right of the pulmonary trunk. The cusps of the valves between the atria and ventricles and the ventricles and pulmonary trunk and aorta are arranged so that the flow of blood can only take place in the desired direction. 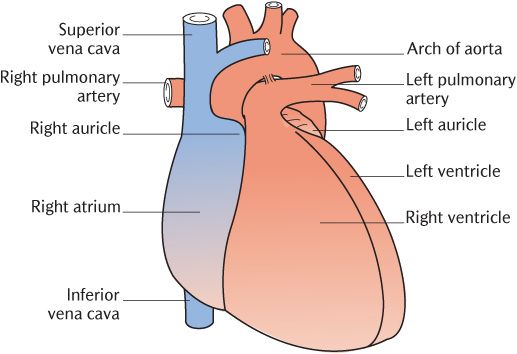 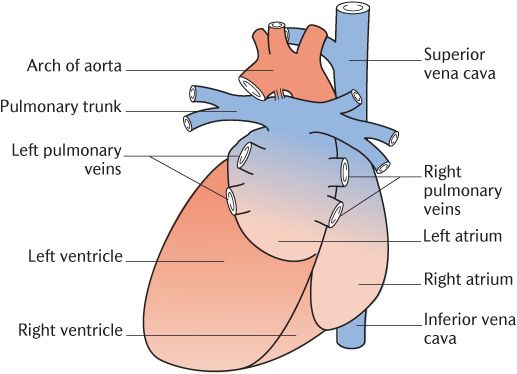 The chambers contributing to the borders of the heart can also be appreciated from Figure 12.4. The right border is formed entirely by the right atrium, the left border entirely by the left ventricle, and the inferior border is formed from right to left by the right atrium, right ventricle, and apex of the left ventricle. Grooves on the external surface of the heart indicate the relative positions of the four heart chambers. The atrioventricular groove separates the atria from the ventricles and the interventricular groove separates the two ventricles.

The myocardium, consisting mainly of cardiac muscle, forms the walls of the four chambers of the heart. The walls of the two atria are continuous with each other as are those of the two ventricles. However, there is no muscular continuity across the atrioventricular junction. The junction is occupied by a sheet of fibrous tissue that supports the cusps of the tricuspid and mitral valves. The presence of this band of fibrous tissue means that electrical activity cannot flow directly from atria to ventricles, except through the atrioventricular bundle (see Section 12.4.4). Fibrous tissue also surrounds the pulmonary and aortic orifices and extends into the upper part of the ventricular septum. These fibrous tissues form the skeleton of the heart and support the valves and the attachments for the cardiac muscle fibres.

The principal features of interest in the interior of the chambers of the heart are summarized in sequence.

The major features of the internal structure of this chamber are shown in Figure 12.6. The superior vena cava enters superiorly and the inferior vena cava enters inferiorly and has a rudimentary valve. Medially, there is a small opening of the coronary sinus that drains venous blood from much of the heart wall; this also has a rudimentary valve. The right atrium passes blood through the right atrioventricular (tricuspid) valve into the right ventricle. 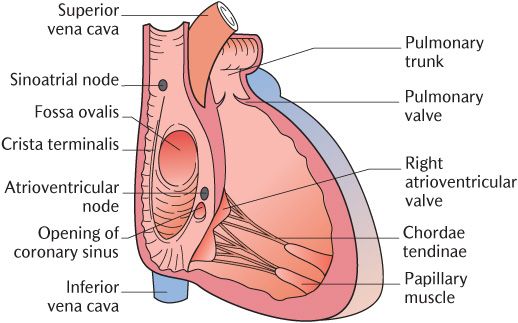 Fig. 12.6 An anterior view of the interior of the right atrium and ventricle.

The fossa ovalis forms a shallow depression in the interatrial wall. This indicates the position of the foramen ovale in the developing heart and its function is described in Section 13.2.4. The ri/>