Some knowledge of the anatomy of the orbit is required by dental students and practitioners because it forms the upper part of the facial skeleton and some of the nerves and vessels supplying dental structures pass through it. Trauma to the middle third of the face, the upper facial skeleton, frequently involves the orbits and the structures they contain. Infections of the oral region occasionally spread to the orbit.

In the following description, the emphasis is on those aspects of orbital anatomy of dental relevance; no description of the structure of the eyeball or the mechanisms of vision is included.

The orbital cavities contain the eyeballs (globes), their associated muscles, vessels, nerves, the lacrimal apparatus, and a large amount of fat to cushion and protect the globes. Each cavity is pyramidal in shape. The base is the orbital opening on to the face; the roof, floor, and medial and lateral walls converge to the apex at the posterior aspect of the orbit. The long axis of the orbit from apex to surface runs forwards and laterally. The bones that form the orbit are illustrated in Figure 30.1; use the figure and a dried or model skull if possible as you read the following description.

Most of the roof of the orbit is formed by the inferior surface of the orbital part of the frontal bone with a small posterior contribution from the lesser wing of the sphenoid; this is pierced by the optic canal through which the optic nerve exits the orbit. The lateral wall is formed by the orbital surfaces of the zygomatic bone anteriorly and the greater wing of the sphenoid posteriorly. It separates the orbital cavity from the infratemporal fossa anteriorly and from the middle cranial fossa posteriorly. The floor of the orbit is occupied by the thin plate of bone forming the upper surface of the body of the maxilla; this plate of bone is also the roof of the maxillary paranasal air sinus over most of its extent although the palatine bone forms a minute triangular area at the posteromedial corner. The bones forming the medial wall are, from front to back, the frontal process of the maxilla, the lacrimal, the orbital plate of the ethmoidal labyrinth, and the body of the sphenoid. The medial orbital wall is very thin; the ethmoid air cells can usually be seen through it in dried skulls or the air cells may be open if the orbital plate is damaged. In life, this thin bone is surprisingly strong because it is buttressed by the plates of bone separating the individual air cells.

The superior orbital fissure between the greater and lesser wings of the sphenoid separates the lateral wall and roof posteriorly. It transmits the third, fourth, and sixth cranial nerves to the extraocular muscles moving the eyeballs, the ophthalmic division of the trigeminal nerve, and ophthalmic veins. The lateral wall and floor are separated by the inferior orbital fissure between the maxilla and greater wing of sphenoid. The inferior fissure communicates anteriorly with the infratemporal fossa and the pterygopalatine fossa posteriorly. The infraorbital groove runs forwards across the floor of the orbit from the medial part of the inferior orbital fissure and becomes roofed over anteriorly to form a canal which eventually opens at the infraorbital foramen. They contain the infraorbital nerve, the continuation of the maxillary nerve.

Fractures involving bones that contribute to the orbit are considered in Box 30.4. 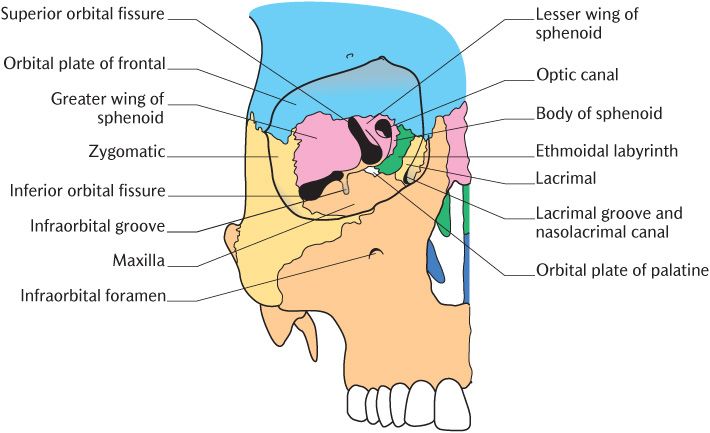 The surface features of the orbits are illustrated in Figure 30.2. Each orbit is closed by the upper and lower eyelids bearing eyelashes on their anterior edge. The palpebral fissures are the gaps between the lids when the eyes are open. The lacrimal papilla is a small prominence located near the medial end of each eyelid with a small opening on its summit called the punctum, this is the opening of the lacrimal canaliculus through which tears drain from the eye. The lacrimal caruncle is a pinkish fold of skin at the medial angle or medial canthus of the eye. In mongoloid ethnic groups, the medial canthus is covered by a small fold of skin called the epicanthal fold.

The eyelids are movable flaps which protect the eye. The upper is the larger and more mobile with its own elevator muscle, the levator palpebrae superioris, shown in Figure 30.3A.

The orbital septum is a connective tissue sheet attached to the margins of the bony orbit; it is deficient centrally at the palpebral fissure. It is thickened above and below the palpebral fissure into crescentic layers of strong fibrous tissue, forming the superior and inferior tarsal plates which are shaped to fit the curvature of the eyeball. Levator palpebrae superioris muscle attaches to the larger upper tarsal plate. The ends of the two plates are attached medially to the lacrimal bone by the medial palpebral ligament and laterally to the zygomatic bone by the lateral palpebral ligament. In Figure 30.3B, you can see that each tarsal plate is covered by thin skin anteriorly and by conjunctiva on its inner surface. The orbicularis oris muscle lies between the skin and tarsal plates. The tarsal glands are modified sebaceous glands embedded in the deep surface of the tarsal plates, opening by small ducts on to the free margin of the eyelids. They produce an oily secretion which spreads over the tear film produced by the lacrimal glands and delays its evaporation. 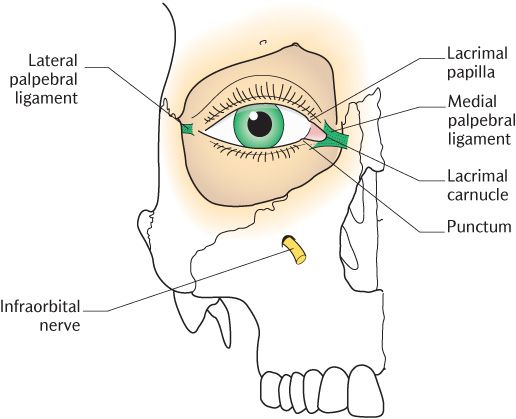 Fig. 30.2 Surface markings of the structures around the orbit. 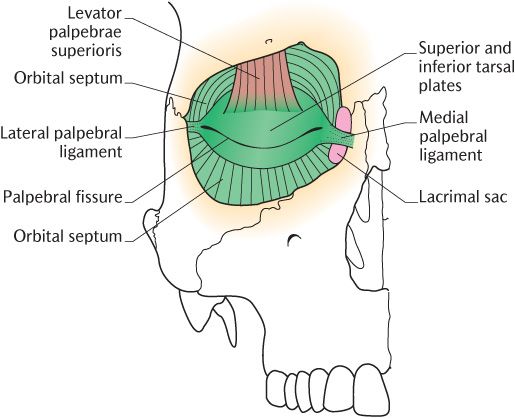 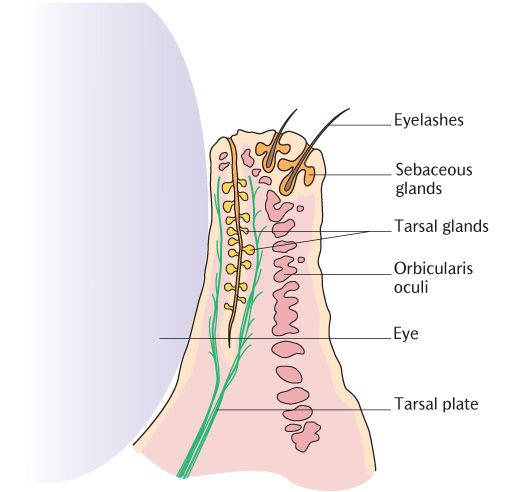 Fig. 30.3 The eyelids. A) The fibrous structures of the eyelid; B) A cross section through the lower eyelid.

Box 30.1 Clinical anatomy of the eyelids

In the upper eyelid, the connective tissue layer between the orbicularis oris muscle and tarsal plate is continuous with the subaponeurotic layer of the scalp (see Section 23.2.5); effusions of blood can easily pass down from the scalp into the upper lid, causing a ‘black eye’.

Dissection through the layers of the lower eyelid (see Figure 30.3B) can be used to access the maxillae for fracture repair. Dissection is carried out between the lower tarsal plate and orbicularis oculi.

The conjunctiva of the sclera and upper eyelid is innervated by branches of the ophthalmic trigeminal nerve and that of the lower lid by the infraorbital branch of its maxillary division.

The eyelid can be used as an access r/>