The head and neck contain the structures that are the most significant to the practice of dental surgery. These regions are not as easy to study from dissection as other areas because an ‘onion skin’ approach has to be adopted. Layers are dissected from the most superficial sub-cutaneous structures to the deepest internal structures, the brain, and spinal cord; structures that appear at one level may not show up again until the dissection has advanced to much deeper layers. It is important to have a general understanding of the structures forming the head and neck to build up a coherent picture of their relationship to each other.

20.1.2 An outline of the major structures

The skull is the structural basis of the head. The skull comprises the cranium, formed from 27 bones joined together by fibrous joints known as sutures, and the separate mandible that articulates with the cranium at the temporomandibular joints (TMJ). The skull houses and protects the brain in the cranial cavity. It also protects other delicate structures vital for the reception of the special senses; the orbital cavities contain the eyes and dense bones in the cranial base house the internal ears. The entrance to the respiratory tract is the bony and cartilaginous nasal cavity; it can also be accessed together with the gastrointestinal tract through the oral cavity between the cranium and mandible.

The major skeletal component of the neck is the cervical part of the vertebral column formed by seven vertebrae. The lower five cervical vertebrae conform to the general pattern of vertebrae outlined in Section 10.1.1, but the upper two cervical vertebrae are specialized; the atlas articulates with the underside of the skull for nodding movements and the second vertebra, the axis, articulates with the atlas for shaking movements of the head. The hyoid bone in the upper anterior neck and the laryngeal cartilages below it form the laryngeal skeleton.

There are several important muscle groups in the head. The muscles of facial expression are small superficial muscles beneath the skin of the face; they alter facial expression in response to emotion, but also play a part in chewing, swallowing, and speech. The muscles of mastication are bulky powerful muscles that move the mandible relative to the upper jaw during mastication, swallowing, and speech. The muscles of the tongue alter the position and shape of the tongue during oral functions. The extraocular muscles within the orbit move the eyeballs and intraocular muscles within the eyeballs control eye functions such as focusing. Tiny muscles within the middle ear cavity reflexly adjust hearing to accommodate loud sounds and prevent damage to the inner ear.

The pharyngeal constrictor muscles form the walls of the pharynx and do what their name indicates; they constrict the pharynx during swallowing to propel food through it into the oesophagus. The pharynx and its constrictor muscles begin in the head, but pass down into the neck. The laryngeal muscles are small muscles attached to the laryngeal cartilages which they move to close and open the larynx during swallowing; they also control the length, tension, and thickness of the vocal folds for production of voice. Two groups of muscles lie superficially in the anterior neck; one group, the suprahyoid muscles, lies above the hyoid bone and the infrahyoid muscles are below it. They raise and lower the hyoid bone and larynx, respectively, during swallowing and also play a significant role in opening the mouth.

Figure 20.1 shows a cross section of the neck; examine it as you read the description below. Observe that the cervical vertebrae are centrally placed and form a considerable amount of the neck. Large bulky muscles posterior to the vertebrae extend the neck and head and smaller flexor muscles are immediately anterior to the bones. Lateral vertebral muscles run on each side from the cervical vertebrae to the first and second ribs. These groups are not important to the practice of dentistry and will not be considered in any further detail. There are, however, two postural muscles in the neck that provide useful landmarks that will be described in Section 20.3.2. In Figure 20.1 you can see the oesophagus anterior to the vertebrae and flexor muscles and the larynx and trachea most superficially. The thyroid gland wraps round the front and sides of the upper part of the trachea. In Figure 20.1, you can also see the major blood vessels supplying the head lateral to the trachea and oesophagus. 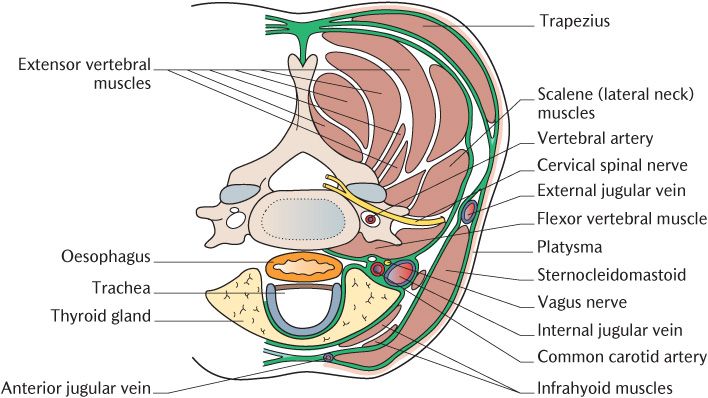 Fig. 20.1 A horizontal section of the neck at the level of the sixth cervical vertebra to show the arrangement of the structures within the neck.

Many of the veins draining the head and neck correspond to the arterial supply of the same area or structure. However, the larger veins do not correspond; in fact, there is only one major vein on each side, the internal jugular vein, which drains the brain and the head and neck. Now you have mastered anatomical terminology, you will be asking, ‘If there is an internal jugular vein, shouldn’t there be an external one too?’ You are right; there is an external vein on each side, but this vessel is superficial and quite variable in size and there is, however, no corresponding artery.

You will realize from Chapter 18 that the structures in the head and neck will not function without the cranial nerves. A brief recap of that chapter will serve as a prelude to the more details of the anatomy of the cranial nerves of the head and neck and orientate you to the location and function of the cranial nerves. Recall the olfactory (I) supplies the olfactory mucosa in the nose, the optic (II) the retinas, and the vestibulocochlear (VIII) the vestibular apparatus and cochleae; these nerves serve the organs of special sense. The oculomotor (third), trochlear (fourth), and abducens (sixth) cranial nerves supply the extraocular muscles of the eye and are, therefore, restricted to the orbital cavities. The hypoglossal nerves (XII) are the motor supply to the tongue muscles and are mainly encountered within the mouth. The tongue is a very large organ extending across the floor of the mouth into the pharynx; sensation from its pharyngeal part is carried by the glossopharyngeal nerves (IX) as is sensation from the pharynx itself. The vagus nerves, as described several times already, have a major parasympathetic component to viscera in the thorax and abdomen. In the head and neck, the vagus nerves supply branches to the muscles of the soft palate, pharynx, and larynx, mainly distributed to the neck rather than the head. The two remaining cranial nerves play major roles in the innervation of the head. The facial (VII) nerves are the motor supply to the muscles of facial expression and parasympathetic secretomotor supply to several glands. The trigeminal nerves (V) are the major somatic sensory nerves of the head. They convey sensation from the facial skin, the eyeballs, and mucosal linings of the nasal cavities and oral cavity to the CNS. They are also the motor nerve supply to the muscles of mastication and other muscles. The upper cervical spinal nerves combine to form the cervical plexus which supplies the skin of the neck and infrahyoid muscles.

There are, of course, other structures that make up the head and neck such as salivary, thyroid, and lacrimal glands, not to mention teeth and their supporting structures. These will be met in the appropriate context in subsequent chapters.

There are two excellent ways for you to reinforce some of the concepts introduced above and to familiarize yourself with the overall structure of the head and neck. The first exercise is to gain a general idea of the skull and how it underpins the anatomy of the head using the diagrams provided in this book together with a dried human skull or a plastic model skull. The second exercise is to study the surface anatomy of the head and neck. You can sit in front of a mirror and use yourself as the subject or you can find a partner willing to be the examination subject; some examinations of surface anatomy are much easier to perform on a ‘patient’ than yourself.

20.2 Introduction to the skull

Look at Figure 20.2 and a skull if you have access to get a general impression of its structure. It does not require any detailed anatomical knowledge to distinguish the smooth curved bones forming the braincase from the more irregular bones forming the facial skeleton. Figure 20.2 is a view of the skull from the front. Orientate your skull the same way. Below the smooth forehead formed by the frontal bone, you should be able to distinguish the two round orbital cavities and the triangular nasal cavity. Observe the nasal cavity extending up between the orbits. You can also distinguish the upper (maxillary) teeth with their roots embedded in the maxillary bones that form the bulk of the facial skeleton between the orbits and upper teeth. The mandible forms the lower jaw and houses the lower teeth. The mandible is usually attached to the braincase by springs on dried or model skulls so that the mouth can be opened; these movements occur at the two TMJs. Notice the proportions of the adult skull; the orbits are positioned about a third of the way down from the crown and the mandible occupies the lower third of the height of the skull. The maxillae and associated bones occupying the intervening area and are referred to clinically as the middle third of the face.

Figure 20.3 shows the skull from above. Observe the junctions between the bones forming the roof of the braincase are formed by wavy lines called sutures; look closely to see how the bones on each side interlock with each other through small finger-like processes. In life, the sutures are filled with a small amount of fibrous tissue. In Figure 20.3, the suture running from left to right across the crown of the skull is the coronal suture and joins the frontal bones to the two parietal bones that form most of the cranial vault. The sagittal suture joins the two parietal bones. The back of the braincase is formed by another curved smooth bone, the squamous part of the occipital bone. (You will encounter the term ‘squamous’ several times in the context of the skull, but also as a descriptive term for epithelial tissue; ‘squamous’ is derived from a Latin word, meaning scale or roof tile and is used to indicate flat smooth structures.) The lambdoid suture links the occipital and parietal bones. Sutures are relatively easy to distinguish between the smooth bones of the braincase, but you may have to look a little more closely to see them joining the bones of the facial skeleton and other areas of the skull. 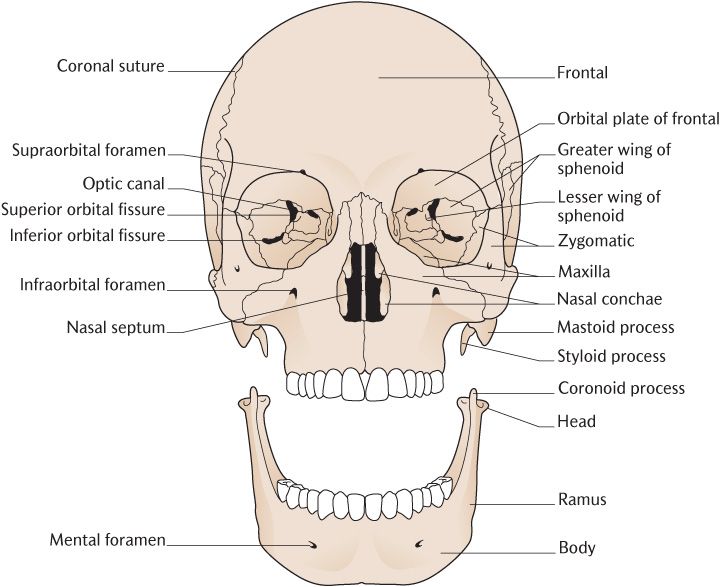 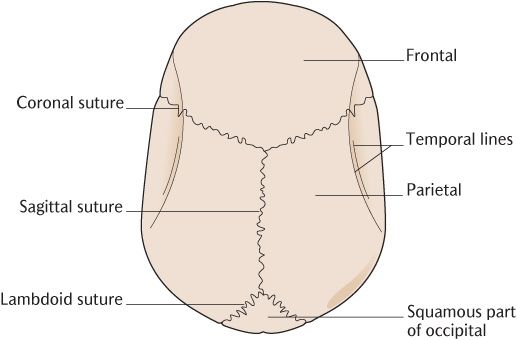 Figure 20.4 is a view of the skull from the side. Observe that smooth curved bones form the roof, back, and sides of the cranial vault. Look particularly at the side walls; the suture lines indicate that the parietal bones form the upper part whereas several bones contribute to the lower part of the side wall; these are the greater wing of the sphenoid and the squamous part of the temporal bone. The temporal and sphenoid bones have a complex shape and have several components, some of which we will meet very shortly. Observe the bar of bone that starts behi/>