Different methods of contraception vary in effectiveness (Table 32.1). The most widely used and effective forms are the oral contraceptive pill (OCP; ‘the Pill’) and the male condom. The latter also confers protection against transmission of infections and, in the face of the increase in many sexually shared (transmitted) infections (SSIs), is therefore recommended. Contraception is best guaranteed by planned regular use of OCPs plus barrier precautions such as a condom. 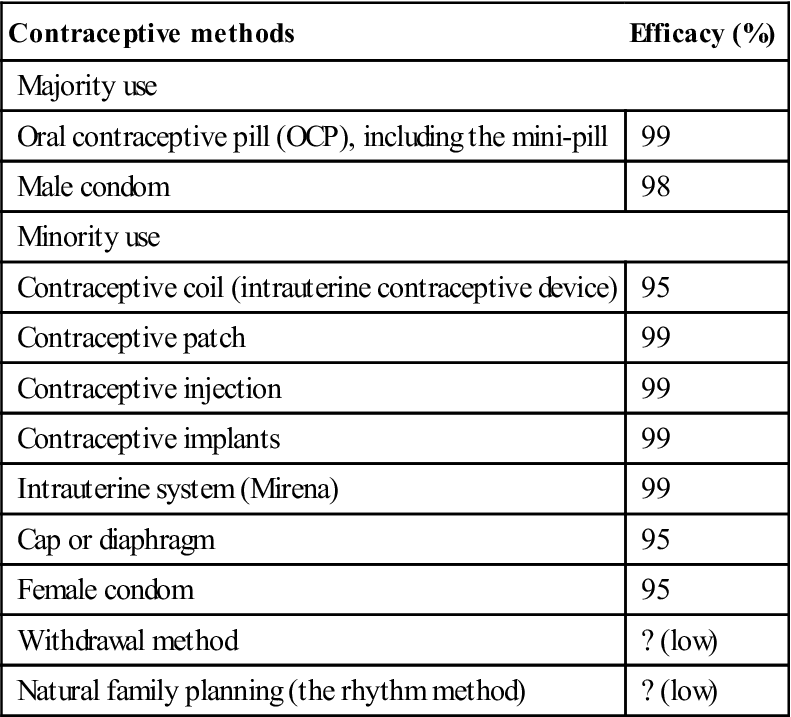 Hormonal contraception is not completely effective in preventing pregnancy and provides no protection against SSIs.

OCPs act by inhibiting ovulation via their action on the hypothalamic–pituitary axis; by altering uterine cervical mucus composition; and by impeding ovum implantation. Emergency contraception may prevent pregnancy when taken within 72 hours of intercourse but is not reliable. OCPs are usually combinations of synthetic oestrogens and progestogens; the mini-pill contains only a progestogen and is less effective than the combination pill. Two types of synthetic oestrogen are used in OCPs – ethinylestradiol and mestranol. The synthetic progesterone is progestogen. Norethindrone and levonorgestrel are other examples.

OCP adverse effects are thought to be caused by the oestrogen component, which is now only 50 mg or less. The major risk is the higher incidence of thromboembolic disease (thrombosis of deep veins and coronary or cerebral thrombosis), but the incidence of cardiovascular or cerebrovascular disease is normally so low in young women that, even with a four- or fivefold increase in incidence, these complications are still uncommon. Hypertension, diabetes, jaundice and liver tumours, usually benign, are also increased in those taking OCPs (Table 32.2; see also Ch. 29). Long-term OCP use may increase the risk of cervical cancer and possibly of breast cancer, but OCPs appear to lower the risk of ovarian cancer by 40% and may also reduce the risk of endometrial cancer. However, any risks from adverse effects of OCPs are low compared with the health risks associated with pregnancy.

OCPs are absorbed from the intestine, but their effect may be impaired by: excessive intestinal motility, as in diarrhoea; antimicrobials, such as amoxicillin, ampicillin or tetracycline, which suppress the gut flora that deconjugate bile salts, thereby interrupting the enterohepatic recycling of the oestrogen; or drugs such as carbamazepine that enhance the liver enzymes that metabolize the OCPs. As a result, these drugs may, at least theoretically, increase the pregnancy risk; the risk is minimal for most antimicrobials, though rifampicin (rifabutin) is an exception (Table 32.3; see also Ch. 29). Rifampicin can interfere with:

If antibiotics, or the illness the antibiotics are required for, cause diarrhoea or vomiting, the OCP may be affected.

Women on OCPs and prescribed antimicrobials are best advised to use additional contraceptive measures whilst taking the antimicrobial and for at least 7 days afterwards (4 weeks in the case of rifampicin). This is not an issue with other forms of contraception.

Carbamazepine and some anti-human immunodeficiency virus (HIV) agents may interfere with the OCP.

A progestogen implant is a small flexible rod placed under the skin in the upper left arm. It works for up to 3 years. It contains etonorgestrel (Implanon). Some medicines render an implant less effective; these include drugs to treat HIV, epilepsy and tuberculosis, and St John’s wort.

Contraceptive patches (Evra) provide progestogens and oestrogens, and work for about 1 week, so new patches are used each week for 3 weeks, followed by a week’s break – just like the OCP.

OCPs can interact with anticoagulants to disturb anticoagulant control and can impair the effect of tricyclic antidepressants. The significance of drug interactions for dental antibiotics with the OCP is probably low.

The predisposition to thromboembolic disease and hypertension theoretically necessitates precautions for operations under general anaesthesia (GA). However, if the patient is otherwise well, GA – in hospital of course – is not contraindicated. Despite the risk of thromboembolism, the disadvantages of discontinuing OCPs before GA outweigh any advantages.

OCPs may worsen gingivitis and possibly periodontitis and may increase the risk of dry sockets; jaw radio-opacities or altered trabecular patterns may appear.

Male and female latex rubber condoms are available; they are inexpensive, have a high success rate approaching 100%, have virtually no side-effects and also protect against SSIs.

Other contraception that is more than 90% effective

■ Intrauterine contraceptive device (IUCD): originally termed the coil or loop because early devices took those shapes, IUCDs are now often T-shaped. They contain some copper (to increase efficacy). The IUCD acts by inhibiting sperm movement through the uterus, altering the mucus and affecting the endometrium.

■ Cap or diaphragm: this mechanically impedes sperm entry into the uterus.

■ Natural family planning (the rhythm method): avoidance of intercourse when ovulation is probable, as assessed by the calendar method, temperature method or mucus test.

Sexually shared infections (SSIs), or sexually transmitted diseases (STDs) or infections (STIs), include bacterial, viral and fungal infections, and infestations (Table 32.4); they were formerly termed venereal diseases (VDs). Non-specific urethritis (NSU) and Chlamydia are probably the most common. There can be infection with more than one SSI, and SSIs generally increase the liability to transmission of viruses such as HIV, especially if there is mucosal or cutaneous ulceration. The group of the most common serious SSIs has been given the acronym SHAG (syphilis, herpes, anogenital warts and gonorrhoea).

The most important sexually transmitted diseases and their causal agents 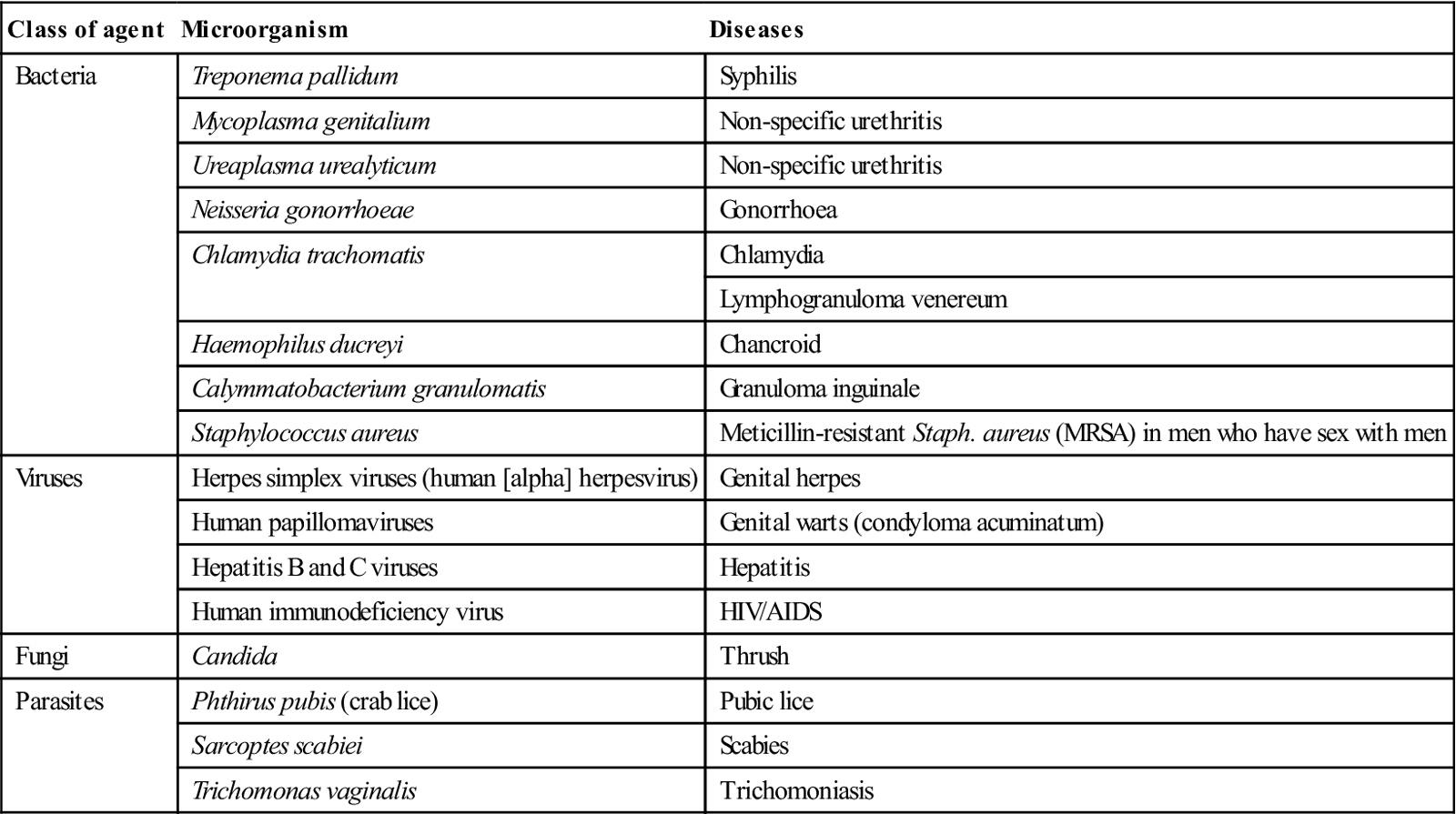 Young people (age 16–24 years) now account for half of all SSI cases, and the incidence of virtually all of these infections is increasing. In the UK in 2008, nearly half a million people attended clinics for SSIs. Sexually promiscuous people can be the source of transmission to literally hundreds of others (Fig. 32.1). The risk of infection is highest in sex workers.

Since SSIs are passed from person to person through unsafe sexual practices, the risk of infection can be reduced by avoiding casual and unprotected sexual intercourse via:

Although any person can be at risk of contracting SSIs, members of certain groups can be at especially high risk; some sell sex to underpin their drug habits (Box 32.1 and Fig. 32.2). Close contact is essential to SSI transmission; they cannot be spread through social contact or via toilet seats, doorknobs, swimming pools, hot tubs, bathtubs, shared clothing or eating utensils.