• Viral hepatitis is common, increasing and transmissible in health-care facilities

• Health-care professionals must be immunized against hepatitis B virus

• Liver disease can lead to bleeding and drug intolerance

Life is impossible without the liver. The liver (hepar) consists of hepatocytes, organized for optimal contact with sinusoids (blood vessels) and bile ducts. It makes and breaks down sugar, proteins and fats; stores nutrients; produces bile; and removes metabolic products and other toxins from the blood. Bile drains to the gallbladder and, via the bile duct, to the small intestine, at which point it is intimately associated with the head of the pancreas, swelling of which may cause biliary obstruction and jaundice (Fig. 9.1).

The liver, through the function of the Kupffer cells (mononuclear phagocytes) that line the sinusoids forms part of the lymphoreticular system (along with macrophages in the lymphoid tissue and spleen) and plays an important role by capturing and digesting bacteria, fungi, parasites, effete blood cells, and cellular debris. The liver turns glucose into glycogen (stored in the liver). This is converted back into glucose when required, maintaining stable blood glucose levels. Excess carbohydrates and protein are converted to fat. The liver also makes proteins – blood proteins (e.g. most blood-clotting factors using vitamin K metabolites), and albumin, hormones, transporter proteins and complement. The liver underlies normal haemostasis, since it produces blood clotting factors I, II, VII, IX, X and XI; bile salts which aid vitamin K absorption (needed for clotting factors); and the hormone thrombopoietin which stimulates the bone marrow megakaryocyte production of platelets. The liver also forms bile essential for fat digestion and absorption of fat-soluble vitamins (A, D, E and K), and produces or stores these vitamins and vitamin B12; it also stores minerals (e.g. copper and iron). Bile (gall) is made up of water, cholesterol, phospholipids, bicarbonate, bile pigments and bile salts; it is a bitter yellow or green fluid secreted by hepatocytes, stored in the gallbladder between meals, and discharged into the duodenum upon eating, being required for fat and fat-soluble vitamin absorption. The bile salts sodium glycocholate and sodium taurocholate are produced by the liver from cholesterol; they help emulsify fats for their absorption and facilitate the activity of pancreatic lipase.

Water-soluble toxins and waste products can be eliminated via the kidneys in the urine, but non–water-soluble toxins need to be chemically modified by the liver to allow this process to occur. Digested proteins in the form of amino acids are broken down further in the liver, a process known as deamination. Nitrogenous products such as ornithine and arginine are converted to urea, which is excreted into the urine by the kidneys. Sex steroids, such as the masculinizing hormone testosterone and the feminizing hormone oestrogen, are inactivated in the liver.

Most drugs, including alcohol, are metabolized/excreted via the liver (Table 9.1). In particular, oral drugs are absorbed by the gut and transported via the portal circulation to the liver. In the liver, these drugs may undergo first-pass metabolism, in which they are modified, activated or inactivated before they enter the systemic circulation.

Some drugs metabolized by the liver

The diagnosis of liver disease depends on the history, physical examination and evaluation of liver function tests (Table 9.2). Apart from bilirubin, liver enzyme levels may also be increased in the blood in various disorders. Aminotransferase levels are sensitive indicators of liver-cell injury (Table 9.3).

aStatins and other drugs can disturb liver function tests.

Raised levels of gamma-glutamyl transferase (GGT) have been reported in a wide variety of clinical conditions, including pancreatic disease, myocardial infarction, renal failure, chronic obstructive pulmonary disease, diabetes and alcoholism. High serum GGT levels are also found in patients who are taking medications such as phenytoin and barbiturates.

Transient neonatal jaundice is common, usually due to the normal breakdown of haemoglobin around birth, and is of little consequence. Severe neonatal jaundice can be caused by prematurity, or haemolysis such as in rhesus incompatibility, biliary atresia or hepatic disease; it can lead to kernicterus (damage to the brain basal ganglia), which can be fatal, or cause epilepsy or choreoathetosis (with or without learning impairment) and deafness. Rare familial liver enzyme disorders that can cause jaundice are shown in Appendix 9.1.

Disorders associated with an early rise in serum levels of conjugated bilirubin (mainly biliary atresia and haemolysis, such as in rhesus disease) can cause a greenish discolouration of the teeth and dental hypoplasia.

Liver disease is increasing, due especially to alcohol use, obesity and infections; in the decade to 2009 in the UK, liver-associated deaths increased by one-fifth. A bleeding tendency, dangers from certain drugs, liability to infections and sometimes infectious hazards are factors to consider in the dental patient with liver disease.

The liver has some powers of regeneration but this capacity can be exceeded by repeated or extensive damage by infective agents, alcohol, drugs or poisons. The word ‘hepatitis’ means inflammation of the liver and also often refers to a group of viral infections that affect the liver, but hepatitis can also be caused by drugs or autoimmune disorders. The most common types of viral infection are hepatitis A, hepatitis B and hepatitis C. Alcohol abuse is the major drug causing acute hepatitis.

Chronic hepatitis is the term for hepatitis that persists longer than 6 months; it may follow acute hepatitis (or appear without warning) and may progress to cirrhosis. The most important causes of chronic hepatitis are hepatitis C virus, alcohol, drugs and autoimmune hepatitis (Table 9.4). Chronic liver disease includes chronic hepatitis, and cirrhosis. Excessive alcohol intake, viral hepatitis and drugs also account for the majority of cases of cirrhosis (Box 9.1). Liver diseases can have many effects, according to the degree of liver damage – including jaundice, a bleeding tendency, and impaired drug and metabolite degradative and excretory activities (Table 9.5). Many patients with liver disease are asymptomatic and the problem frequently remains subclinical for years or decades. Malaise, anorexia and fatigue are common, sometimes with low-grade fever and upper abdominal discomfort.

Bilirubin ester is normally excreted in bile and is one of the factors that colour the faeces. If bilirubin is not conjugated (enzyme defect or parenchymal liver disease) or excreted (biliary obstruction), it accumulates in the body and colours the skin and mucous membranes (jaundice) and the whites of the eyes (icterus); it is detectable clinically at levels greater than 40 micromol/L, and the urine darkens.

Jaundice is often caused by liver disease but may also result from haemolysis, abuse of alcohol or other drugs, or infection (Table 9.6).

Pale, fatty faeces and malabsorption result from failure of bile salts to reach the intestine (obstructive diseases), causing malabsorption of fats, and of the fat-soluble vitamins (e.g. vitamin K) needed for clotting-factor synthesis. Bile salts accumulating in the blood may cause itching, nausea, anorexia and vomiting.

Drugs (e.g. alcohol and barbiturates) that can induce the hepatic cytochrome P450 system can lead to diminished effects of other drugs, such as the contraceptive pill, phenytoin or warfarin. By contrast, some drugs (e.g. cimetidine, omeprazole, sulphonamides and valproate) impair P450 activity, causing enhanced activity of drugs such as carbamazepine, ciclosporin, phenytoin or warfarin (Table 9.7). 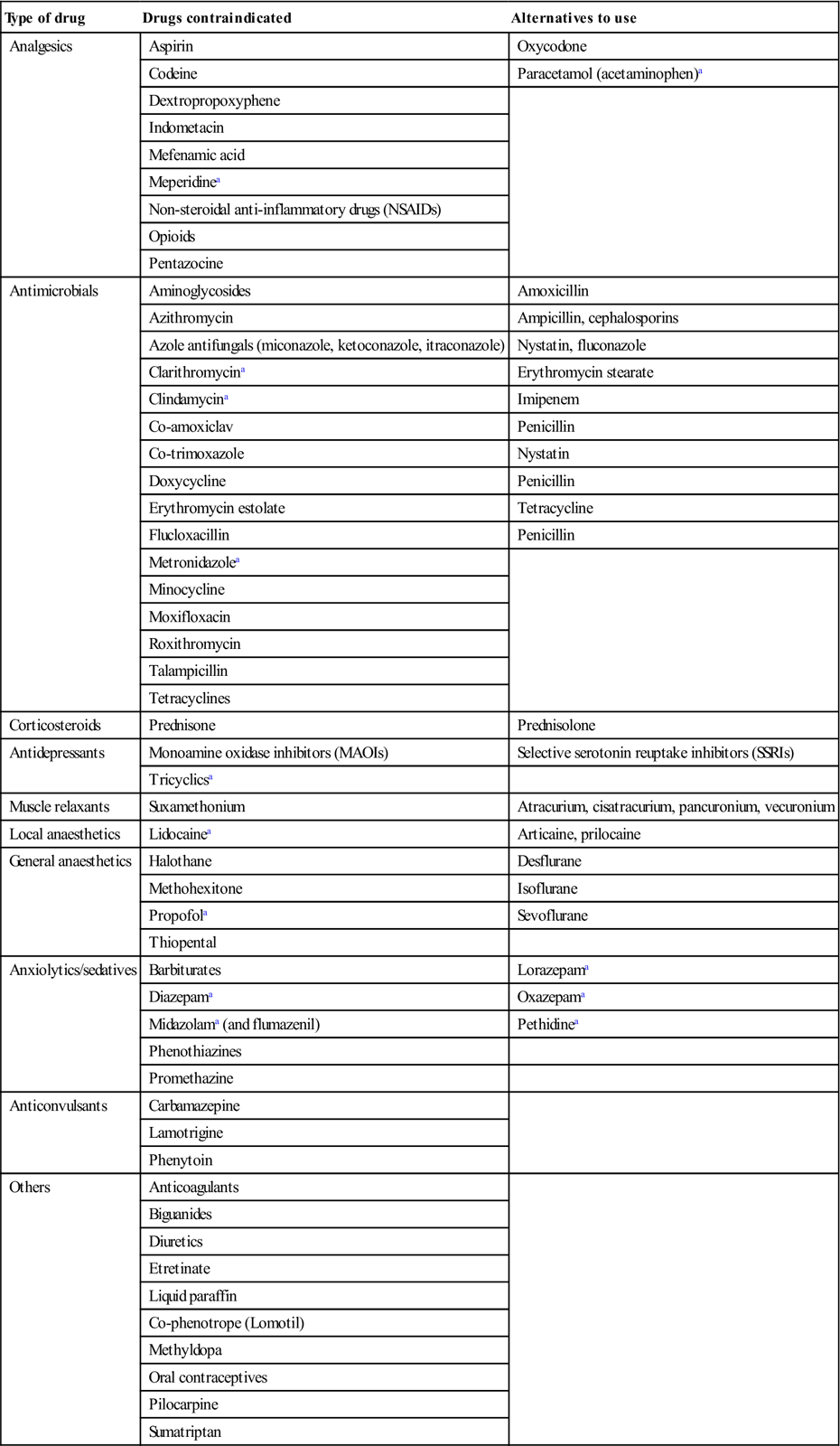 aOr given in lower doses than normal. In a variety of liver diseases there is no evidence of increased risk of hepatotoxicity at currently recommended doses. Therefore, paracetamol/acetaminophen can be used safely in patients with liver disease and is a preferred analgesic/antipyretic because of the absence of the platelet impairment, gastrointestinal toxicity, and nephrotoxicity associated with nonsteroidal antiinflammatory drugs.

Cirrhosis chiefly affects the middle-aged or elderly, and is frequently asymptomatic in its earlier stages. Anorexia, malaise and weight loss are common, and effects can be widespread (Box 9.2; Fig. 9.2).

Many viruses cause hepatitis (Table 9.8). The term ‘viral hepatitis’ used in health care usually refers to infection by hepatitis B, D or C viruses (HBV, HDV, HCV), which are transmitted parenterally (Table 9.9). Jaundice during childhood is often caused by hepatitis A virus (HAV) and typically is of little consequence; hepatitis B and C are the most relevant to health care, since the delivery of health care has the potential to transmit viral hepatitis to both health-care professionals (HCPs) and patients. Outbreaks have occurred in outpatient settings, haemodialysis units, long-term care facilities, and hospitals, primarily as a result of unsafe injection practices; reuse of needles, fingerstick devices and syringes; and other lapses in infection control. 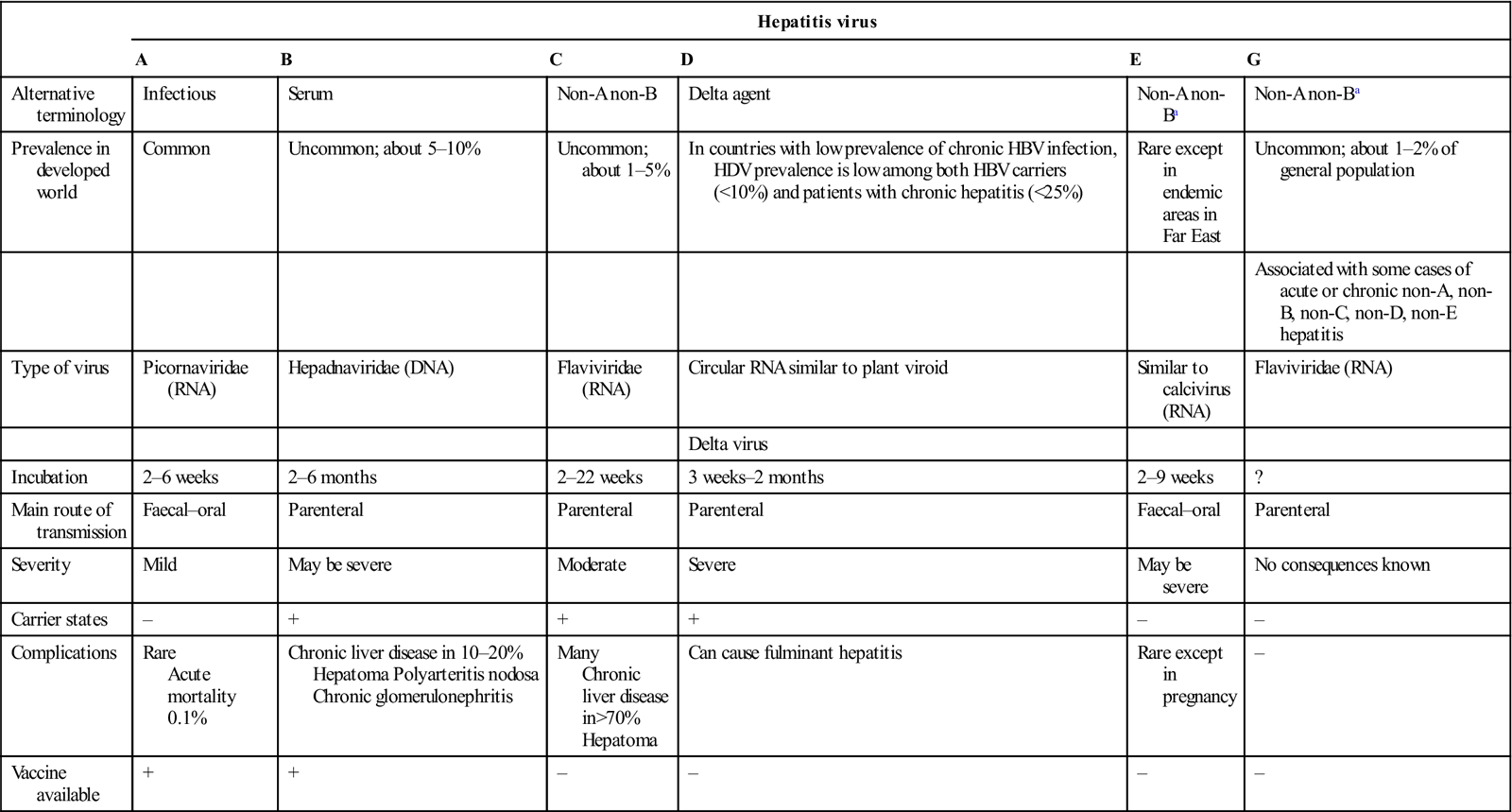 Jaundice in the teenager or young adult may be due to viral hepatitis A, B, C, D or E. Several of these viruses, particularly HAV and hepatitis E virus (HEV), are transmitted faeco–orally. Some, especially HAV and HBV, and probably HCV, can be spread sexually. Hepatitis A and E are more of a problem in resource-poor areas and are transmitted faeco–orally; hepatitis E is more severe among pregnant women, especially in the third trimester.

Hepatitis B has long been of greatest importance but, in the absence of a vaccine, hepatitis C has become a more serious problem. Standard (universal) precautions against transmission of infection must always be employed, since these viruses, particularly HBV, HCV and HDV can be transmitted in blood and blood products and in other body fluids; they may be passed on by practices in which infection control is lacking, particularly in intravenous drug use where there is needle- or syringe-sharing. Any practice in which there is a skin breach, such as body-piercing or tattooing (Fig. 9.3), can also constitute a risk. Co-infection with other blood-borne agents, such as the human immunodeficiency virus (HIV), is common, particularly in intravenous drug users.

All hepatitis viruses can cause acute, or short-term, illness, and jaundice is common (Fig. 9.4). Some hepatitis viruses, particularly HCV and HBV, also have a small acute mortality. HBV, HCV and HDV can also cause chronic hepatitis, in which the infection is prolonged – sometimes lifelong – and may be associated with virus carriage, chronic liver disease and liver cancer (hepatoma; hepatocellular cancer); they can also be responsible for aplastic anaemia and other extrahepatic manifestations. The clinical and laboratory features of viral hepatitis are summarized in Table 9.10.

Hepatitis A is caused by HAV and is rarely serious. Hepatitis A is endemic throughout the world, seen particularly where socioeconomic and living conditions are poor and, in those areas, infection (and consequent immunity) is common in childhood (Fig. 9.5). In the developed world, many people reach adulthood without infection and have no immunity, and therefore are at risk from infection if they travel to endemic areas.

Spread of hepatitis A is largely faeco–oral, by consumption of contaminated water or food, particularly raw shellfish. For example, nearly 300 000 persons were infected in one outbreak in Shanghai, originating from contaminated clams. Hepatitis A can also be transmitted sexually and by close person-to-person contact, and in body fluids including saliva. Persons in the armed forces, food handlers, HCPs, sewage workers, travellers to areas of high endemicity, children />