• Allergic reactions are common and increasing; some are potentially fatal

• Allergies may underlie asthma – and many other diseases

Allergy is an abnormal immune response (usually a type I or type IV hypersensitivity response) to an antigen – a protein or allergen. Many allergies have a hereditary component but the prevalence of allergies appears to be increasing. People who suffer allergies to one type of substance are more likely to suffer allergies to others.

Hypersensitivity responses are summarized in Table 17.1 and common allergens are shown in Table 17.2. Allergies to dental materials are discussed in Chapter 29.

Common allergens are pollen, dust mites, mould, pet dander, milk and egg proteins but, in many cases, the allergen cannot be reliably identified. The most common types of allergic type I hypersensitivity reactions include allergic rhinitis (hay fever), some asthma, eczema and urticaria – so-called ‘atopic reactions’, which affect about 10% of the population, have a strong genetic basis (and family history), and are related to antibody of immunoglobulin E (IgE) class. The first time an allergy-prone person is exposed to the allergen, T-helper (Th2) lymphocytes produce interleukin-4 (IL-4) and interact with B cells, stimulating them to produce large amounts of IgE antibody. This attaches to receptors on basophils (in the circulation) and mast cells (in the lungs, skin, tongue and linings of the nose and intestinal tract; Fig. 17.1). When the specific allergen is encountered again, the IgE antibody–antigen reaction on basophils and/or mast cells signals them to synthesize chemical mediators (prostaglandins and leukotrienes) and to release others (histamine and heparin, as well as substances that activate platelets and later on attract eosinophils and neutrophils). This produces a rapid type I hypersensitivity response within minutes, which may be anaphylactic and cause bronchospasm and hypotension (Fig. 17.2).

Type IV reactions also appear to be involved in the pathogenesis of some chronic diseases that result in granulomas (e.g. tuberculosis, leprosy, sarcoidosis, orofacial granulomatosis and Crohn disease) characterized by foci of chronic inflammatory cells, especially macrophages, that may fuse to produce giant cells, which arise in response to certain antigens (sometimes of an unidentified nature; Box 17.1).

• To zirconium, beryllium, silicone or others

Why allergies appear to be increasing is unclear, but alterations in exposure to microorganisms may be an explanation. Children who live in crowded households, or who attend day care, have fewer allergies, a fact that has been attributed to microbial exposure somehow protecting against allergies. Exposure to bacterial endotoxins reduces release of inflammatory cytokines such as tumour necrosis factor alpha (TNF-α), interferon gamma (IFN-γ), IL-10 and IL-12. Toll-like receptors (TLR), which respond to microorganisms, may also be involved.

Clinical manifestations of an allergic reaction are dependent upon the nature of the response, the antigenic challenge and the individual’s allergic predisposition. Early symptoms and signs of a type I (immediate) hypersensitivity reaction include wheezing, breathlessness, sneezing, runny eyes, itching and urticaria, which typically occur within a few minutes to an hour. As the reaction progresses, bronchospasm, acute hypotension and angioedema of the face and laryngopharynx may result in life-threatening anaphylactic shock (Table 17.4).

Contact allergy (type IV delayed hypersensitivity), being a T-cell-mediated process, is characterized by local inflammation at the allergen contact site (skin or mucous membrane), and is usually slower and less profound. Metals, disinfectants, rubber, detergents and bonding agents can cause allergic contact (and irritant contact) dermatitis. Rashes are seen in many allergies (Fig. 17.3).

Diagnosis of an allergy is based on clinical history and presentation, including a family history of allergy; skinprick or patch testing to identify contact allergens using a battery of test allergens (European Standard Contact Dermatitis Testing Series; Table 17.5); or an elimination diet to identify food allergens. Patch testing is usually carried out with Finn chambers on Scanpor, a non-woven adhesive skin-friendly tape that contains no colophony. Assays of serum IgE levels (PRIST: paper radio-immunosorbent test) and serum specific IgE antibodies (RAST: radioallergosorbent test) can help. In the RAST, purified extracts of a range of allergens are coupled to cellulose or paper discs to which the patient’s serum is applied. Its ability to react with one or more of these allergens is tested by adding rabbit anti-IgE labelled with radioactive iodine. The level of radioactivity then indicates the levels of specific IgE antibodies.

The European Standard Contact Dermatitis Testing Series: some allergens and their sources

No tests, however, can reliably predict the possibility of allergic or anaphylactic reactions. Many cases of ‘local anaesthesia (LA) allergy’ represent untoward events, such as the unintended intravenous injection of the drug, while many cases of ‘food allergy’ are of food intolerance or occasionally food poisoning only. Supposed phenomena such as systemic ‘allergy’ to amalgam restorations, ‘candida syndrome’ and ‘total allergy syndrome’ are myths.

Medications such as antihistamines or antidepressants that interfere with allergy tests must be stopped from 2 days to 6 weeks or more before testing. Resuscitation facilities must be available during allergy testing, since anaphylactic reactions can occasionally follow intradermal skin test doses, particularly of penicillin. The test procedure includes a positive control (usually histamine), a negative control – a solution without allergens, and then the test – the various suspect allergens. If the test substance provokes an allergic reaction, a raised, red, itchy wheal may develop within about 20 minutes; in general, the larger the reaction, the more sensitive is the patient. A negative skin test means that the patient is not allergic to that particular allergen. A complication of skin testing is that it can induce sensitivity to the test compound.

To avoid future allergic reactions, known allergens should be avoided, which is easier said than done, since sensitive individuals may react to minute traces and allergens can be present in the most unexpected places (more likely in commercially prepared foods and drinks than in natural products).

Individuals with a complex history of allergy should be referred to a specialist allergy clinic for careful assessment and management. Treatments include drugs to block allergic mediators, or the activation of cells and degranulation (Table 17.6). These include antihistamines, corticosteroids and cromoglicate. Antileukotrienes (leukotriene receptor antagonists, e.g. montelukast or zafirlukast) are also effective. Intravenous injection of monoclonal anti-IgE antibodies (omalizumab), which bind to free and B-cell–associated IgE, causes their destruction. Immunotherapy by desensitization or hyposensitization is a treatment in which the patient is gradually vaccinated with progressively larger doses of the responsible allergen for at least a year – but this is potentially hazardous, as it can induce anaphylaxis.

Patients who have had serious allergic reactions are also usually advised always to carry adrenaline (epinephrine) with them, for subcutaneous self-administration in the event of a reaction (e.g. EpiPen; see below).

There is no reliable evidence that supports the use of alternative medicine in the control of allergies.

Anaphylaxis is a severe life-threatening type I hypersensitivity reaction, which may affect up to 15% of the population. Hyper-IgE syndromes predispose to anaphylaxis and it is caused mainly by food, drugs, latex and insect stings (Table 17.7). 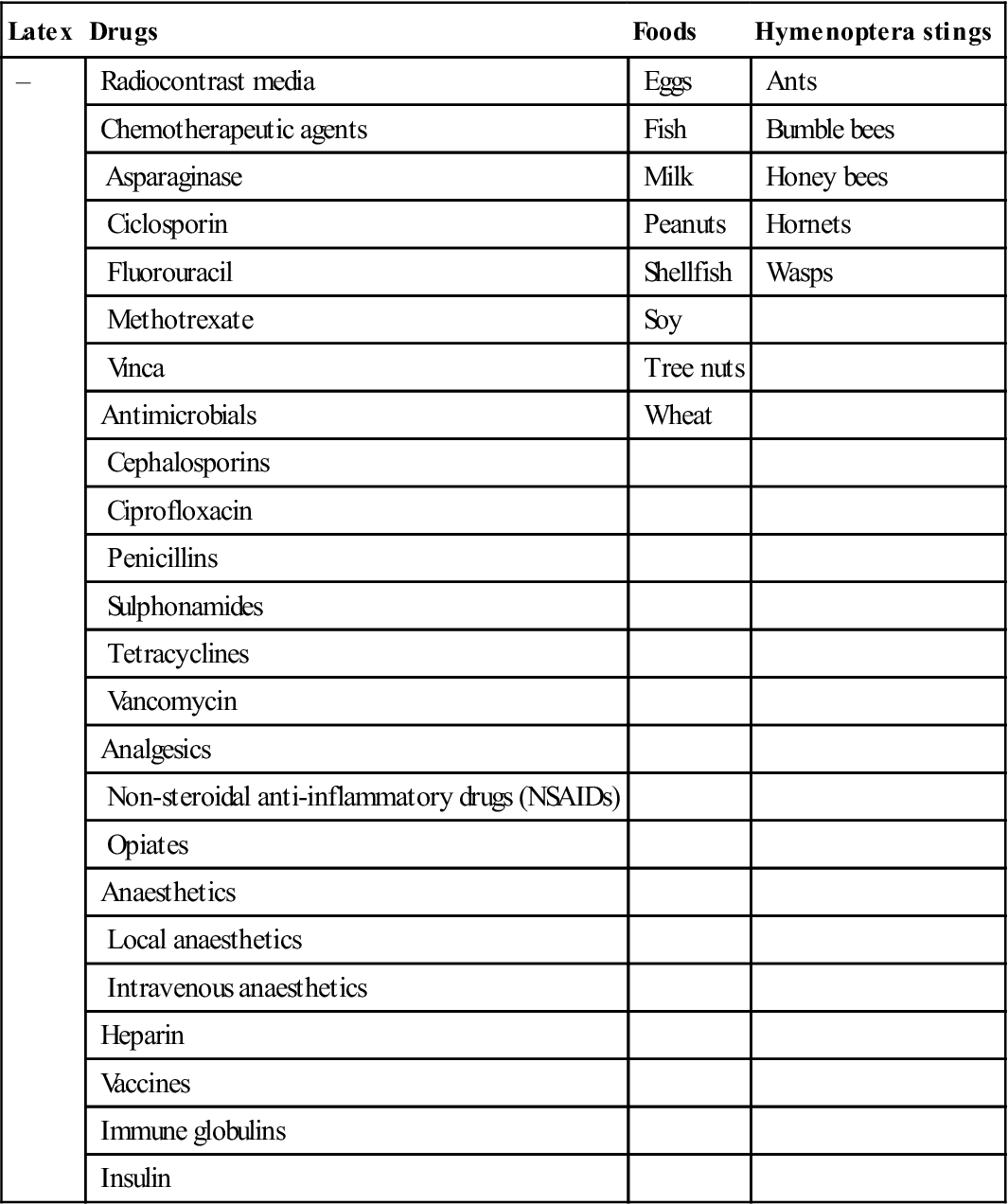 Bronchospasm, acute hypotension and angioedema of the face and laryngopharynx are the critical features, but there may also be flushing, dizziness and urticaria. The condition may progress to arrhythmias or cardiac arrest. The time to onset is usually indicative of the severity of the reaction (i.e. the more rapid the onset, the more severe the reaction). Most reactions occur within seconds to 30 minutes of exposure to the responsible precipitant.

People at risk must avoid the allergens responsible and carry adrenaline (epinephrine) for immediate use to inject into the outer thigh muscle. Patients should carry 2 EpiPens® with them because>35% of patients may require more than one adrenaline dose and up to 20% of patients will go on to develop a biphasic anaphylactic response sometimes hours later (Fig. 17.4).

There is often a positive family history. The common specific allergens are inhaled and include pollen, mould, dust mites and pet dander. Pollen from trees such as birch, alder, cedar, hazel, hornbeam, horse chestnut, willow, poplar, plane, linden/lime and olive can be responsible; in northern latitudes, birch is the most important. Grasses, especially ryegrass and timothy, may be responsible, as may various weeds.

Features typically include: itchy eyes, nose, roof of mouth or throat; frequent sneezing, nasal congestion and discharge; lacrimation; and cough. Nasal polyps often develop. In the northern hemisphere, symptoms are particularly prevalent from late May to the end of June.

The best management is to avoid the allergens, if possible, but this can be difficult. Medications include: topical cromoglicate (which inhibits mast-cell release of chemicals) as prophy/>