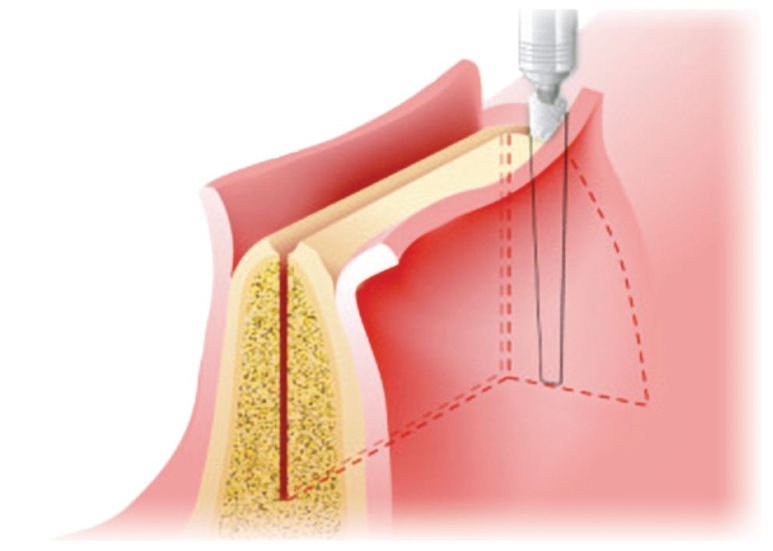 Following tooth loss, resorption of the alveolar ridge occurs in both the vertical and horizontal direc-JL tions. Most of this resorption occurs during the first 6 months after tooth removal. In the maxillary and mandibular anterior segments, rapid resorption of the buccal plate occurs. Resorption of the posterior segment occurs later.1,2 Although dental rehabilitation of partially and fully edentulous patients with dental implants is a reliable and common practice at present,3–5 unfavorable local ridge conditions may prevent dental implant placement.

In the past, complicated laboratory techniques, including the use of pink porcelain to give the impression of shorter teeth, were used in an attempt to compensate for lack of facial bone in esthetic implant sites. Today, these techniques are generally not necessary and are considered unacceptable in the esthetic zone. Rather, to correct this dual vertical and horizontal resorption, several surgical approaches have been proposed: autogenous bone grafts,6,7 guided bone regeneration,8,9 and alveolar distraction osteogenesis (ADO).10–14

Presently, the most widely used method for increasing bone volume is bone graft augmentation, using either autogenous, allogeneic, or xenogeneic bone graft material. The problem with bone augmentation, however, is its unpredictability. Resorption of bone grafts almost always occurs, and as much as 40% to 60% of the augmented bone can be completely resorbed over time. Other disadvantages of bone grafting are insufficient soft tissue coverage, donor site morbidity, and prolonged healing time before implant placement.

Alveolar crest distraction is a relatively new technique for restoring bony height of a resorbed alveolus. Over the past decade there have been enough reports of alveolar distraction to begin a critical evaluation of the various approaches to ADO, including unidirectional, bidirectional, and width distraction, to establish criteria for its use.

First described by Von Langenbeck in 186915 and later by Codivilla,16 distraction osteogenesis (DO) was abandoned because of complications described by Compere.17 After long neglect, the technique was readopted and standardized by Ilizarov,18,19 who reintroduced osteodistraction to reconstructive surgeons searching for an alternative to bone grafting. In 1989 he described what he termed callus distraction, “a process of new bone formation between surfaces of two bone segments gradually separated by incremental traction.” The way to gain bone mass was through a slow, methodic path rather than bone grafting, in what has been termed the Ilizarov principle.

Ilizarov found that distraction regenerate developed in two specific zones of mineralization in which longitudinally oriented primary osteons demarcated a fibrous interzone of collagen bundles directed parallel to the vector of distraction. Ilizarov established the basic principles of distraction osteogenesis: (1) the tension-stress law and (2) the importance of mechanical load and adequate blood supply.

Following orthopedic experience, it was recommended for treatment of maxillofacial deformities.20 Chin and Toth10 were the first to describe this operation for reconstruction of alveolar bone defects in humans.

The evolution of ADO included both human and animal studies. The first animal study performed suggested that ADO could be of benefit.21 Further studies showed that bone had formed between the distracted segments.22 These encouraging findings enhanced the use of titanium implants for ADO.23 Animal study success was followed by human trial, with further endorsement.24–26 At the dawn of the new millennium, computer-assisted ADO was introduced.27

As the procedures for ADO developed, the technique was used in more complex procedures, such as rebuilding the vertical dimension of the weakened mandible31 and distraction of autogenous grafts.32

In recent years, ADO has gained popularity,11–13 especially in view of its advantages. One of those advantages is that the gradual traction of the bone transport segment is followed by simultaneous bone osteogenesis with soft tissue functional histiogenesis.33 Thus, shortening of treatment periods and earlier implant placement are permitted.14,24 In addition, the success rates achieved when implants are placed in ADO-treated bone are similar to those achieved in alveolar bone.8,34

Moreover, Chiapasco et al,8 when comparing ADO to guided bone regeneration, suggested that both techniques are equally effective and that implant survival and success rates are comparable to those for implants placed in native bone. They concluded that the long-term prognosis of vertical bone gain is more predictable with distraction osteogenesis.

Alveolar ridge distractors can be classified according to location, intraosseous or extraosseous; according to direction of distraction, unidirectional or bidirectional; and by alveolar widening or lengthening. Uckan et al33 compared intraosseous and extraosseous ADO and found no statistically significant difference in complication rate between the two methods. Therefore, the clinician is free to choose an ideal size and type of distractor according to the defect’s size and shape, the patient’s tolerance, and the distance to the opposing arch. What is most important is that the device be applied atraumatically and that the distraction osteotomy and distraction process be done as physiologically as possible.

The desired result of alveolar distraction is the transportation of a segment of mature bone to lengthen the alveolus for implant anchorage, to improve esthetics, and to satisfy the functional prosthetic requirements. Preservation of the periosteum and the endosteal blood supply is critically important to the osteogenic potential of the distraction zone. Therefore, the mucosal incision must be placed in the vestibule rather than at the alveolar crest, and the periosteum must be elevated minimally. The lingual or palatal mucoperiosteum and soft tissue must be left intact and must not be detached from the transport segment. The osteotomy design of the transport segment should be slightly trapezoidal, for “draw,” but the segment also should be as large as possible so that osseous integrity is not compromised.

During distraction, there is a tendency for palatal or lingual alveolar deflection to occur because of mucoperiosteal traction during lengthening. A countertraction device can be attached to teeth or two distraction devices can be used, one at each edge of the bone segment, to help overcome vector deflection. Generally, two devices allow better control of vector.

A 16-year-old patient was involved in a motor vehicle accident that caused dentoalveolar fractures of teeth and avulsion of several anterior maxillary teeth and associated bone. Some months later, the intraoral view revealed a severe vertical deficiency of the alveolar bone that did not permit placement of implants (Fig 3-1a).

After the initial treatment with maxillomandibular fixation, DO of the anterior maxilla was planned. An incision, designed with minimal periosteal detachment to preserve vascularity of the transport segment, was made at the depth of the sulcus. A trapezoidal segmental osteotomy was performed, and a central unidirectional distraction device was secured with miniscrews (Figs 3-1b and 3-1c).

Five dental implants were placed when healing was completed (Fig 3-1g). After a 6-month osseointegration period, a fixed dental prosthesis was placed (Fig 3-1h). Panoramic radiographs taken before and after distraction demonstrated the segmental bone movement as well as successful implant placement (Figs 3-1i to 3-1l). 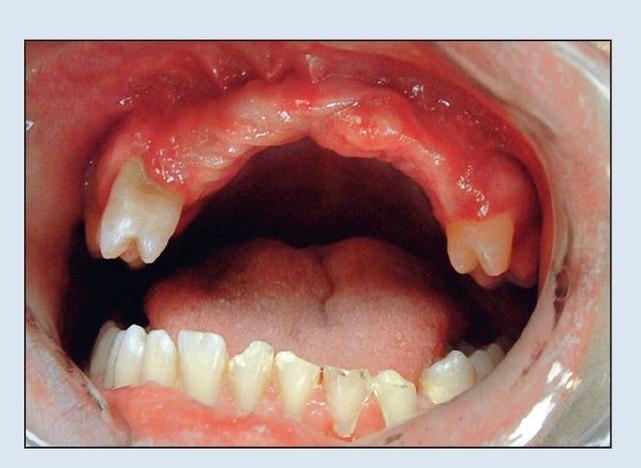 Fig 3-1a Patient presents for treatment several months after avulsion of maxillary anterior alveolar bone and teeth. A vertical deficiency of alveolar bone prevents the placement of implants. 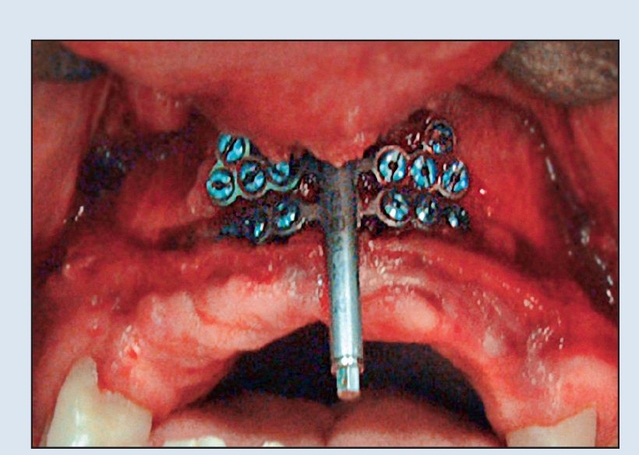 Fig 3-1b A trapezoidal segmental osteotomy is performed, and the distraction device is fastened by miniscrews. 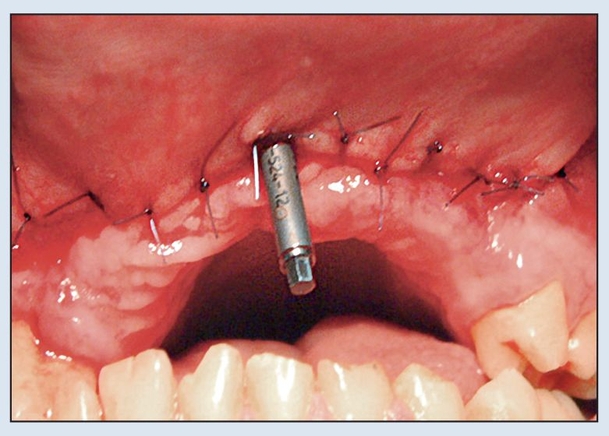 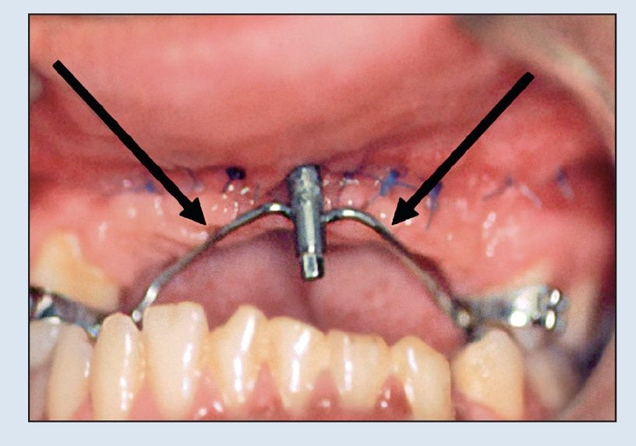 Fig 3-1d Tooth-borne counter suspension (arrows) of the distractor is used to prevent deflection to the palatal. 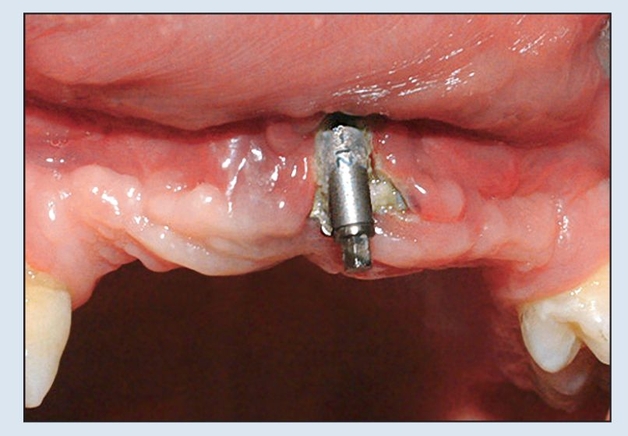 Fig 3-1e Vertical distraction of 12.0 mm has been accomplished. 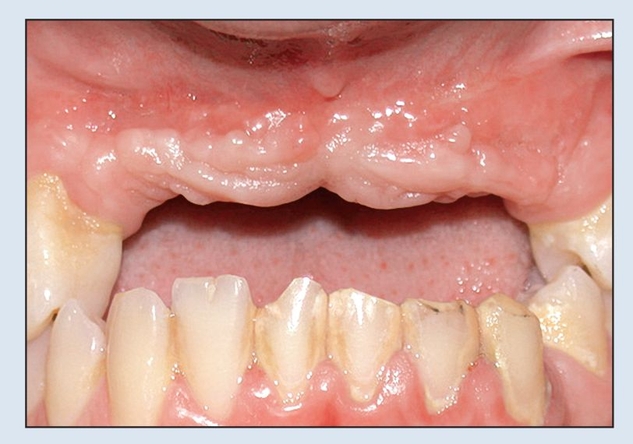 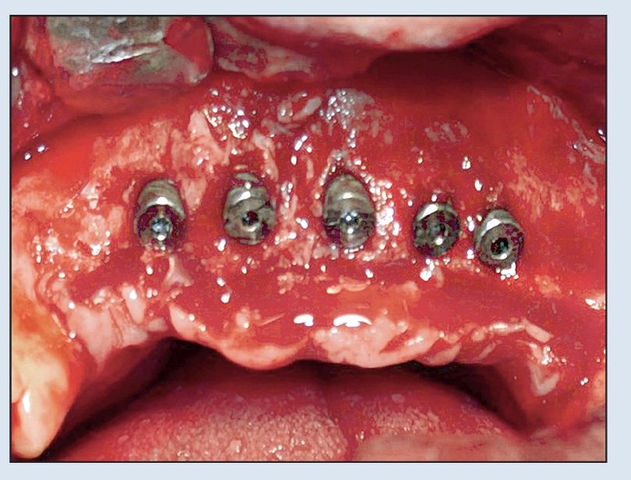 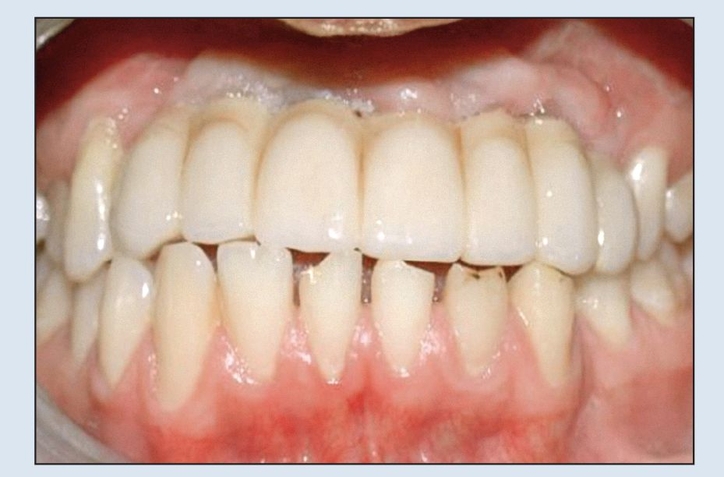 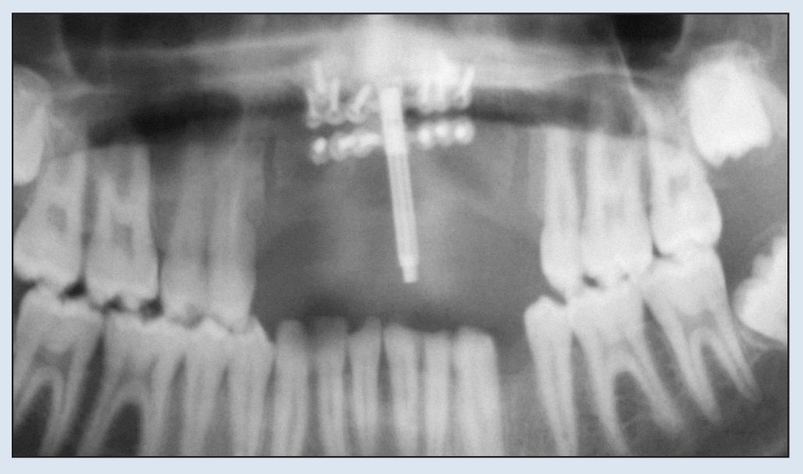 Fig 3-1i The central unidirectional alveolar distractor before vertical distraction. 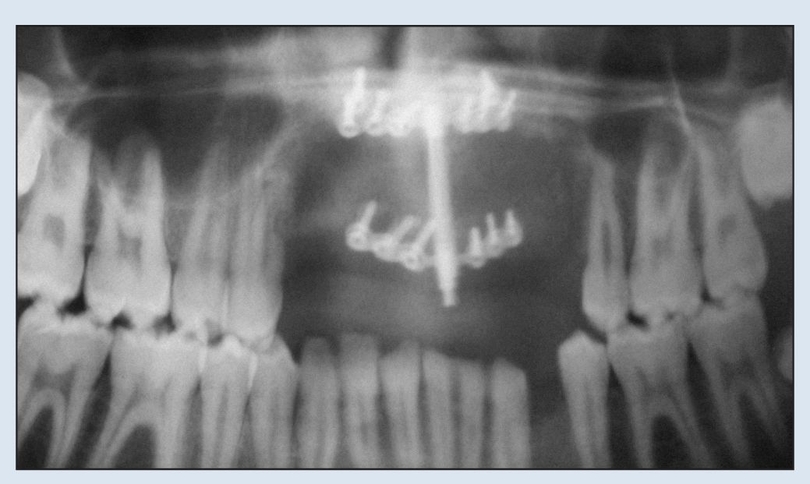 Fig 3-1j The restored crest after 12.0 mm of vertical distraction.

A 23-year-old patient was referred after treatment for traumatic symphyseal mandibular fracture and avulsion of anterior maxillary teeth and the alveolar supporting bone. The mandible was treated with open reduction and placement of two miniplates. The examination revealed a maxillary vertical deficiency of the alveolar bone that prevented placement of implants (Fig 3-2a).

DO of the remaining anterior maxillary bone was planned. An incision was made deep in the sulcus; to pre serve the vascularity of the transport segment, bone detachment was minimized. A trapezoidal segmental osteotomy was performed. To overcome the palatal traction of the vector of lengthening, two distraction devices were placed at the edges of the distracted bone and coun-tersupported by the teeth (Figs 3-2b and 3-2c). 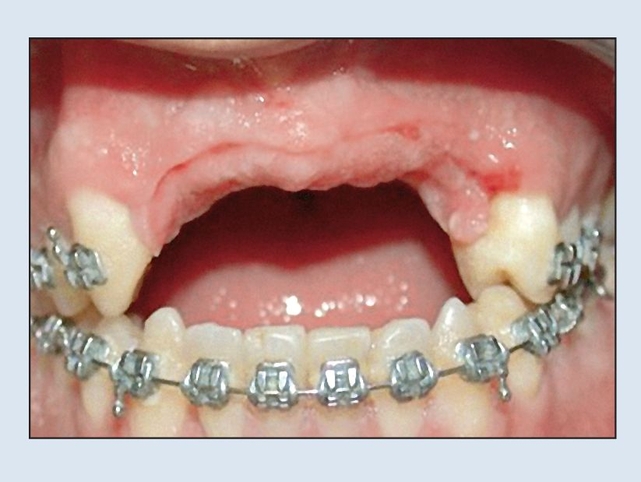 Fig 3-2a Patient shown after traumatic avulsion of maxillary anterior teeth and the alveolar supporting bone. Maxillary vertical deficiency of the alveolar bone prevents the placement of implants. 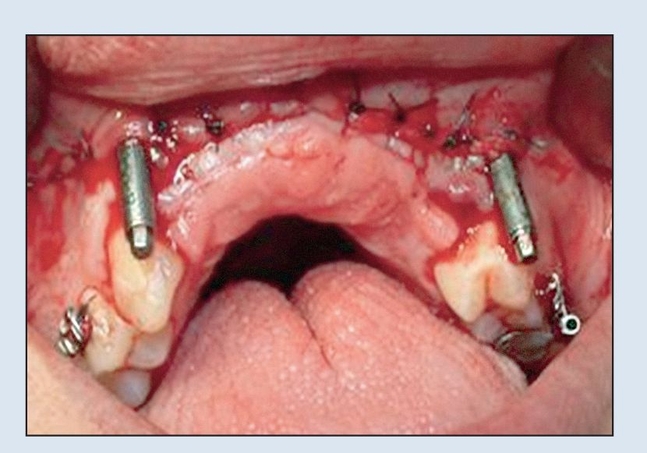 Fig 3-2b A trapezoidal segmental osteotomy is performed, and two unidirectional distraction devices are connected. 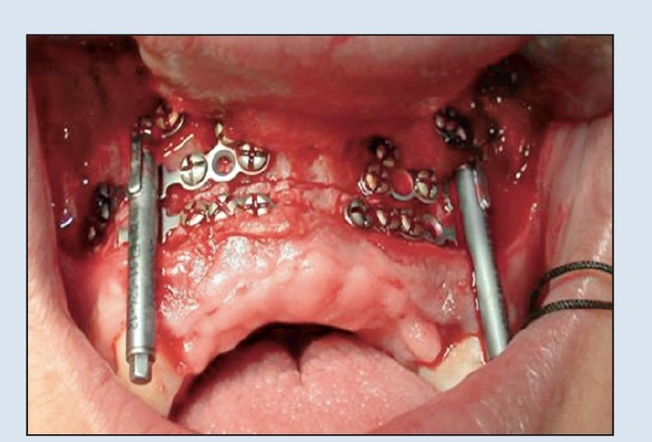 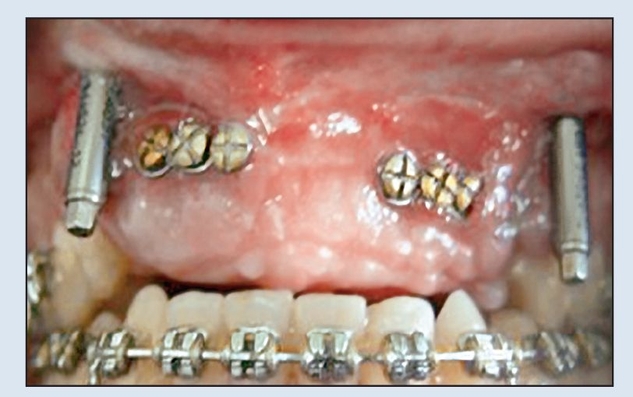 Fig 3-2d At the end of vertical lengthening of 12.0 mm, the defect is closed. 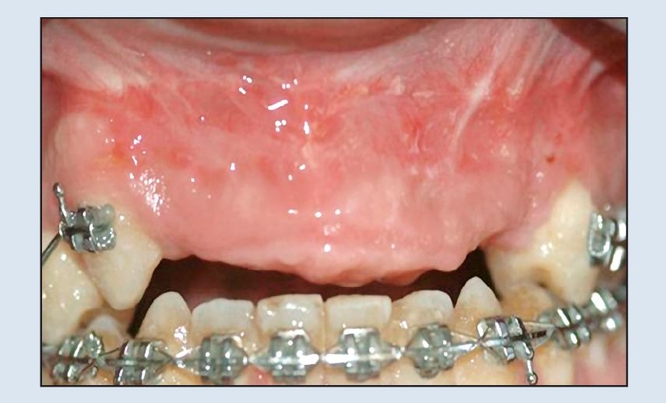 Figs 3-2f and 3-2g Panoramic radiograph of (f) the two devices before lengthening and (g) the 12.0-mm vertical lengthening.

Figs 3-2h and 3-2i (h) CT showing the deficient alveolar crest before distraction. (i) CT taken 3 months after the distraction, before placement of the implants, demonstrating the newly distracted bone.

After 5 days of latency, the two distraction devices were activated once a day at a rate of 0.5 mm per day until the desired vertical alveolar height was achieved. The application of two devices allowed better control of the vector of lengthening. A vertical distraction of 12.0 mm was achieved (Fig 3-2d). After an additional 10 weeks of retention for bony maturation and mineralization, the two distraction devices were removed (Fig 3-2e).

With unidirectional distractors, distraction is possible in the vertical direction only. Often, unidirectional distractors require the assistance of other means, such as orthodontics, to pull the bone transport segment buccally against the traction of the periosteum. With the bidirectional crest distractor (2DCD, Surgi-Tec), however, distraction can be performed buccolingually as well as in the vertical direction. The 2DCD consists of three main parts: a baseplate; a threaded cylinder and a small screw for locking the cylinder into the baseplate; and a horizontal module with two retracting pins that connect via the vertical screw to the cylinder.

Before the distractor is placed, the ideal tooth position is determined on study casts by the use of denture teeth and pink wax. The size of the defect can also be determined by noting the amount of wax used. An Omnivac shell or a partial denture without buccal flanges is fabricated as a guide to the amount of distraction required.

Surgical placement of the distractor includes osteotomy and mobilization of the bone transport segment. There is a latency period of 4 to 7 days, depending on the size and location of the transport segment, before the distractor is activated. When activation is begun, the amount of daily activation depends on the size of the segment to be distracted. (The smaller the segment, the less cancellous bone is available and the slower the rate of distraction.) The recommended rate is 0.4 mm, twice a day.

A 35-year-old patient was involved in a motor vehicle accident and lost six mandibular anterior teeth and the associated alveolar bone (Fig 3-3a). Iliac crest bone augmentation was attempted but failed because of the lack of soft tissue coverage.

Activation commenced after 1 week of latency. The rate of distraction was two half-turns (0.8 mm per day) by the patient at home (Fig 3-3d). After 20 days of activation, a full length of 15.0 mm and sufficient height, level with the alveolar plane, were achieved (Fig 3-3e). The postoperative radiograph revealed the fully activated device (Fig 3-3f).

The patient was asked to wait 2 months to allow consolidation. After the consolidation period, the 2DCD was removed after the administration of local anesthesia, and five implants were placed in the distracted area (Fig 3-3h). In the area of the mandibular left canine (the area of the vertical bone cut), it was impossible to place an implant, and the patient preferred not to go through another bone graft at this area. Three months later, the area was reconstructed with a porcelain-fused-to-metal fixed partial denture. 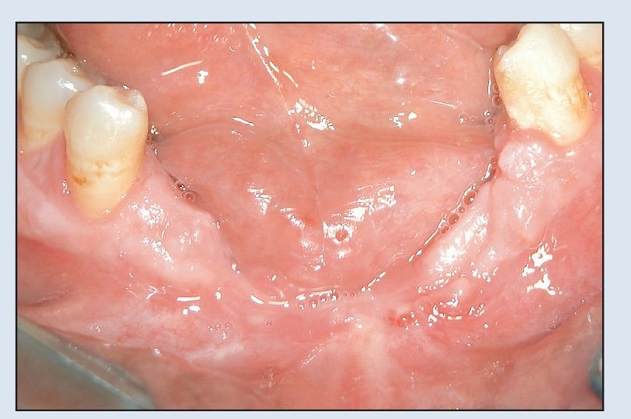 Fig 3-3a The patient experienced complete traumatic loss of the anterior alveolus and teeth.