Internal derangement of the temporomandibular joint involves changes in the movement of the meniscus within the joint capsule, which causes mechanical disturbances and impedes normal joint function. The following may occur:

Equally likely is that an alteration in the lubricating efficacy of the synovial fluid and damage to the fibrocartilage result from free radical release (see page 400) and this leads to an altered condyle meniscal relationship and the formation of adhesions, further restricting meniscal mobility. These adhesions are readily seen on arthroscopy.

It is frequently stated that the reciprocally clicking meniscus can then proceed to complete anterior displacement of the meniscus, which will lead to locking. This natural progression is used as a basis for instigating treatment for clicking.3 However, Lundh (1987)4 reported, from a series of 70 cases, that most reciprocal clicks do not progress to locking and that those most likely to progress are associated with:

However, Seligman and Pullinger (1991)5 state that in a study of women with non-reducing meniscal displacement, there was no difference in attrition levels between symptomatic patients and asymptomatic controls.

Many authors have reported that most clicking joints do not bother the patient and become better with time.6–7 Solberg (1986) reported that clicks occurring beyond 20 mm of incisal opening are not amenable to conservative treatment.8

In summary, therefore, it may be stated that:

A decision must be made whether to restore in the presence of a click, or attempt treatment of the click prior to restoration.

These include the following:

The fabrication of these appliances is described in Chapter 4. There are few data on their efficacy in the treatment of clicking. Nonetheless, they are often required for establishing jaw relationships prior to reorganised restorative therapy. Care must be taken with the large horizontal: vertical ratio cases and a modified appliance made to prevent distalization of the mandible.

The following is a brief review of some pertinent literature.

Lundh et al. (1985)9 reported elimination of joint tenderness but no reduction of clicking or muscle tenderness with night-time wearing of the appliance; symptoms returned when the appliance was no longer used. Anderson et al. (1985)10 reported that eight out of 10 patients failed to improve with a flat stabilization appliance and two of eight progressed to a lock. However, the appliance was worn for only 90 days, and no description of the severity of symptoms or degree of opening was given. Maloney (1986) reported abatement of symptoms with the use of stabilization appliances, but did not present long-term follow-up data.11 Part of the therapy of Maejersto and Carlsson (1983)6 involved the provision of occlusal stabilization appliances and they reported abatement of most clicks over a seven year period and very limited worsening of the remainder.

Solberg et al. (1985) claim there is a potential for healing within the meniscal tissue, and the use of a stabilization appliance may allow such healing to take place.12

Lundh et al. (1985), however, reported that after 52 weeks there was no difference in symptoms between a stabilization treated group and an untreated control group.9 In 1988, Lundh et al. reported that night-time wearing of a flat occlusal stabilization appliance for six months was associated with no statistically significant difference in symptoms or signs when compared to an untreated control group.13

Wilkinson et al. (1992) reported that patients with pain of arthrogenous origin exhibited some resolution following eight weeks of stabilization therapy, provided that the appliance was used for 24 hours each day and not just at night.14 The appliance did not resolve joint sounds.

Sagami et al. (1990) reported an improvement in symptoms and signs following manipulation, yet the meniscus was not repositioned on the condylar head.15 Manipulative techniques may assist in the breaking down of adhesions. They are conservative, but not as controlled in their effects as lysis and lavage by arthroscopy under general anaesthesia.

The fabrication of this type of appliance is described in Chapter 4. The objective is to reposition the condyle anteriorly onto the meniscus, in the expectation that this will eliminate the click. The appliance is then adjusted to allow the condyle to move backwards and upwards slowly, while retaining the meniscus in position on the condyle head. Obviously, if such an adjustment reprecipitates the symptoms, the degree of anterior positioning of the mandible required to relieve the click would lead to separation of the opposing posterior teeth (Fig 28-1b), and this would create severe restorative complications. It is possible that relief of symptoms is related more to improving joint mobility by breaking down adhesions than to ‘recapturing’ the meniscus. 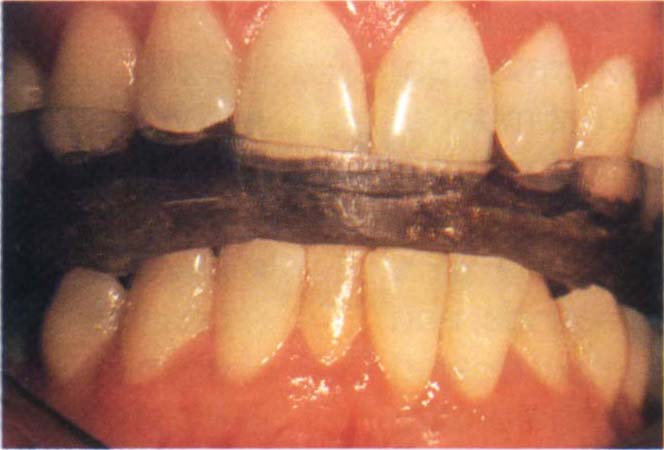 Fig. 28-1a Anterior repositioning appliance. The patient had been treated for a click which did not particularly bother him. 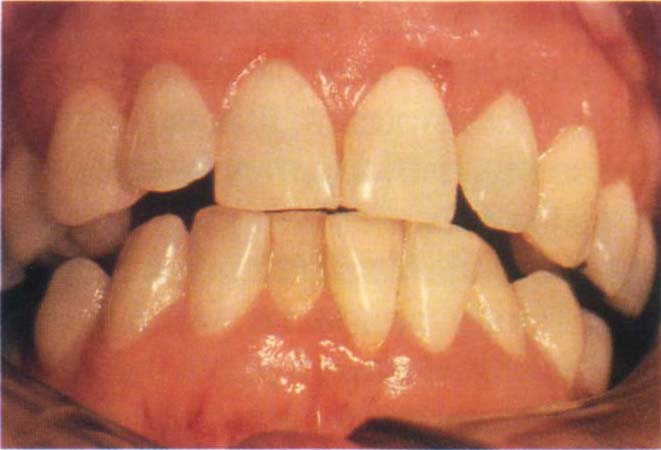 Fig. 28-1b Space between posterior teeth when the appliance is removed. This presents a severe restorative problem. The patient now felt aware of the click which re-occurred if the appliance was not worn.

The following is a brief review of pertinent literature. Clark (1984) states that of 25 patients treated with an anterior repositioner, 12 reported an improvement of symptoms, but after one to three years, 11 out of the 12 showed a recurrence of symptoms.16

From a study of 24 patients, Lundh et al. (1985)9 found that anterior repositioning therapy was successful in decreasing joint pain at rest and during chewing and in eliminating reciprocal clicking. Unfortunately, the improvement was of short duration, the majority of patients reporting pain and clicking and demonstrating TM joint tenderness following removal of the splint, after six weeks of use. Maloney et al. (1986)11 reported that over a one year period anterior repositioning appliances relieved symptoms, but, discouragingly, over a three year period the failure rate was high, even when the appliance therapy was followed up by other treatment – such as orthodontics, orthognathic surgery and full mouth rehabilitation – in order to maintain the anterior position. For those who embark on expensive and extensive retreatment of failed cases after only short-term reduction of symptoms obtained with appliance therapy, these results may cause pause for thought.

In contrast to the study of Maloney et al. (1986),11 Lundh and Westesson (1989)17 reported a high success rate in a group of 15 patients after three years in treating the symptoms of reciprocal clicking by either restoration or orthodontic treatment to maintain the jaw relationships previously established by an anterior repositioning appliance. The patients were carefully selected. Criteria for inclusion in the study were: a displaced meniscus that could be recaptured and maintained in a normal relationship to the condyle; freedom from symptoms during the period of repositioning by appliance therapy; previous unsuccessful treatment by other means. Patients with mild or no pain were excluded. The authors reported that within three years, all the horizontal repositioning and approximately half the vertical repositioning had been eliminated, and state that ‘the relapse is probably caused by movements of the teeth and mandible’. The long-term prosthodontic implications of these observations require further investigation. In the absence of a matched control group, it is not possible to determine whether it was the psychological effect of the care and attention or the restorative therapy that produced the beneficial results. Also, the results of treatment were not independently assessed.

Lundh et al. (1988) reported a statistically significant improvement in a group with anteriorly displaced menisci treated by repositioning with cemented silver onlays, as compared with a group treated with a flat stabilization appliance and an untreated control group.13 However, the actual differences between the reduction in symptoms for the two treatment groups, although statistically significant, were small. The differences in signs were larger. Removal of the onlays after six months reprecipitated symptoms.

Tallents et al. (1990) reported on the efficacy of anterior repositioning appliances in 68 patients, compared with eighteen untreated control patients.20 All patients were diagnosed as having meniscal displacement by arthrography. Follow ups were at on/>