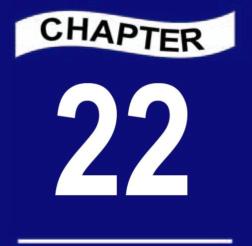 The patient is best placed in a sitting or semi-reclining position.

A semilunar incision (Fig. 22.1A) is sufficient for good exposure, but proper localization of the position of the tooth is important to make sure there will be sufficient bone to support the wound edges after the procedure. The lower part of the incision should not come closer than 0.5 cm from the gingival margin. 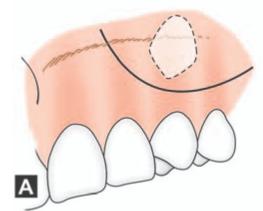 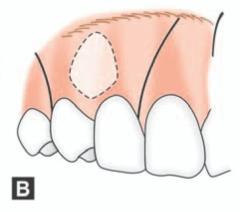 Figs 22.1A and B: Incisions for removal of labially placed canine

For the beginners, a standard triangular (2 sided) or trapezoidal (3 sided) flap with a broad base and incision along the gingival sulcus maybe better for easy handling (Fig. 22.1B).

The mucoperiosteum is reflected to expose the bone and the bulge of the tooth. A window is cut over the prominence of the crown with a chisel or bur or both (Fig. 22.2B). This is enlarged to expose the whole crown, taking care not to damage the roots of the adjacent teeth. An elevator can then be inserted to mobilize the tooth (Fig. 22.2C).

If there is resistance, expose the root of the tooth and then try to elevate. The elevator should not rest on the adjacent teeth; rather the cortical plate is used as the fulcrum.

If there is still resistance, division of the tooth should be considered (Fig. 22.2D). Dividing the tooth into two or three parts will help in the easy removal of the fragments. The middle piece can be removed first, and the resultant space can be utilized for elevating the remaining two fragments.

The area is thoroughly debrided and follicle remaining if any is removed. The flap is repositioned and sutured into place.

1.The crown of the impacted canine can be appreciated by the presence of a swelling of the labial gingiva.

2.Crown of the impacted tooth can be easily palpated. 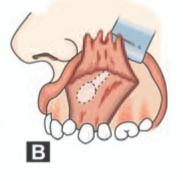 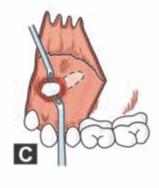 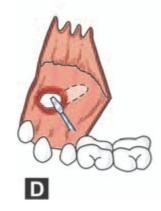 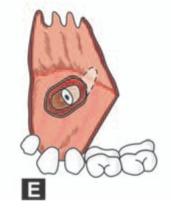 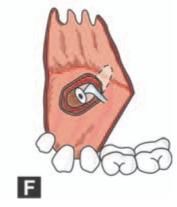 Figs 22.2A to F: Schematic diagram showing surgical removal of labially impacted maxillary canine. (A) Impacted left maxillary canine. Note the relationship of the cuspid to the roots of the adjacent teeth, nasal cavity and maxillary sinus. (B) Drill holes placed in the cortical plate overlying the crown so as to expose the crown, (C) After the full exposure of the crown elevator is applied beneath the crown to mobilize the tooth, (D) If the tooth is resistant to elevation, the crown is sectioned using bur and it is removed, (E) Cavity created following removal of crown, (F) The root is moved into the space created by the removal of the crown and it is then removed

3.Presence of a radiolucency around the crown of the impacted tooth suggestive of a large follicular sac.

4.Incompletely formed root of canine seen in the X-ray.

5.Vertical or semi-vertical position of the tooth.

6.Patient in the 12-15 years age group when the bone is more elastic.

The following is the case report of a patient in which a labially positioned impacted maxillary canine was removed without tooth sectioning (Figs 22.3A to L).

Case report (Figs 22.3A to L): A 14-year-old girl reported to her dental practitioner with complaints of proclination of left upper lateral incisor and unerupted upper canine. On examination there was proclination of 22 and 23 was impacted (Figs 22.3A and B). The swelling of the crown of impacted 23 was visible as well as it could be palpated (Fig. 22.3 A- yellow oval) on the labial side near the region of the root of 22. Intraoral periapical Xray showed impacted 23 in a semi vertical position. The root was incompletely formed (Fig. 22.3C-yellow arrow)) and there was a radiolucency (Fig. 22.3C-yellow circle) surrounding the crown suggestive of a follicular sac. Since there was no adequate space for orthodontic eruption of impacted 23, its surgical removal was planned. The procedure was performed under local anesthesia. A trapezoidal mucoperiosteal flap was raised on the labial side. Bone covering the crown of the impacted tooth was found to be very thin (Fig. 22.3 D-yellow circle). It was removed using the sharp tip of a #9 Molt periosteal elevator (Fig. 22.3E). (Alternatively, the overlying bone can be removed using bur also). After adequate exposure of the crown, the tooth was elevated out of the socket with the sharp tip of an elevator using the labial cortical plate as the fulcrum (Figs 22.3F and G). The follicle surrounding the crown of the impacted canine was also removed. Following thorough debridement (Fig. 22.3 H), the flap was replaced back and sutured (Figs 22.31 and J). Figure 22.3 K shows the impacted canine and the follicle. The postoperative period was uneventful and sutures were removed on the seventh postoperative day (Fig. 22.3L).

However in majority of cases, when the tooth is deeply impacted, sectioning of the impacted tooth into two or three pieces may have to be done to facilitate its removal as shown in the subsequent case reports.

Step by step procedure for the removal of labially impacted canine by tooth sectioning (Incision in the sulcus):

Case report (Figs 22.4A to H): A 52-year-old man reported with complaints of recurrent pain in right upper buccal sulcus. On clinical examination, the left upper quadrant was found to be edentulous and there was a bridge on the right upper quadrant. An OPG (Fig. 22.4A) revealed an impacted right upper canine high up in the alveolus (yellow oval) above the roots of the right upper central and lateral incisors. The tip of the root was found to be curved and in close approximation to the right maxillary sinus. After relevant investigation and discussion with the patient the procedure was planned under local anesthesia. Considering the high position of the impacted tooth, an incision was given in the sulcus, from 15 to 21 region (some what similar to the incision given for Caldwell Luc operation). This is because a semilunar incision or the reflection of a trapezoidal flap will necessitate a significant amount of flap reflection to reach the vicinity of the impacted canine. The mucoperiosteal flap was then elevated to expose the bone overlying the impacted tooth. The bone overlying the impacted tooth was removed using bur with profuse saline irrigation to expose the crown of the impacted tooth (Fig. 22.4B). Care was taken not to injure the roots of the adjacent teeth. The crown was then sectioned (odontotomy) using a fissure bur (Fig. 22.4C). The sectioned crown was removed (Fig. 22.4D). Using an elevator, the root was elevated into the space created by/>