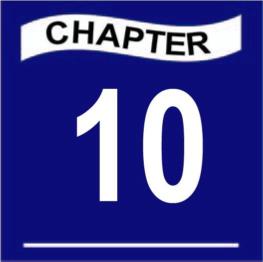 Classification of impacted maxillary third molars: The system of classification of upper wisdom tooth is essentially same as that for impacted mandibular third molar. Nevertheless, there are some additional parameters to be considered which will aid in preoperative assessment of the case and guide in planning the surgery for a successful outcome. 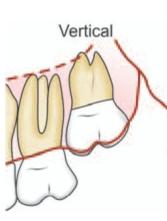 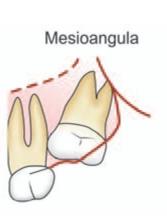 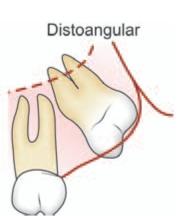 Fig. 10.1: Classification of impacted maxillary third molar based on angulation 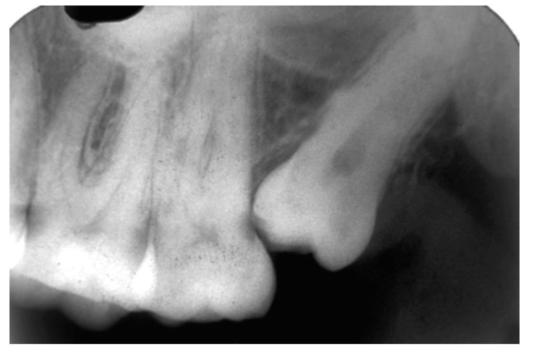 4.Laterally displaced with the crown facing the cheek, horizontal, inverted and transverse positions- less than 1%

5.Aberrant position sometimes associated with pathological condition such as cyst

This is based on the relative depth of the impacted maxillary third molar (Fig.10.4). 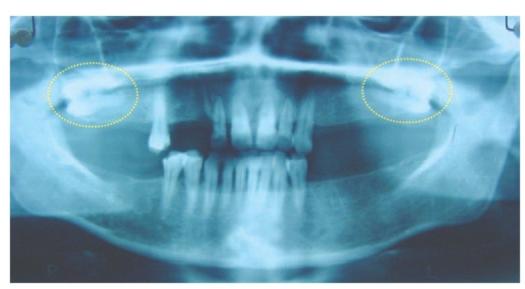 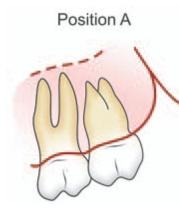 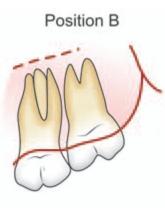 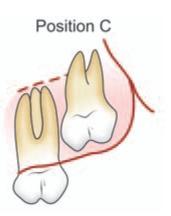 PositionAOcclusal surface of third molar is at the same level as that of second molar.

PositionBOcclusal surface of third molar is located between occlusal plane and cervical line of second molar.

PositionCOcclusal surface of third molar is at or above the cervical line of second molar.

4. Relationship of Impacted Maxillary Third Molar to the Maxillary Sinus

1. Sinus approximation (SA): No bone or a thin partition of bone between the impacted maxillary third molar and maxillary sinus.

Indications for the Removal of Maxillary Third Molar

1.Extensive dental caries which is beyond restoration and causing food stagnation

4. Tooth involved in pathological process such as cyst.

5. Over erupted and non functional upper third molarWhen the opposing mandibular third molar has been removed, the maxillary third molar tends to over erupt leading to food impaction between the latter and second molar (Fig.10.5). This in turn leads to periodontal problems and dental caries of maxillary second and third molar. 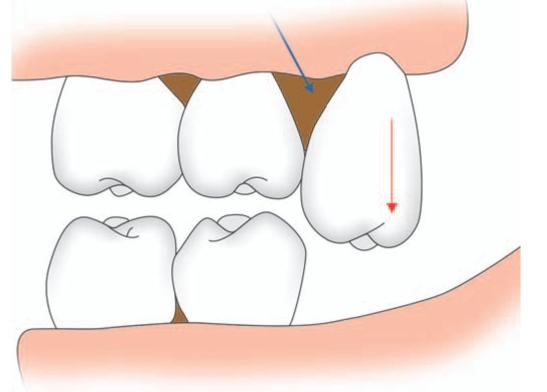 Additionally because of over eruption, the upper third molar impinges on the edentulous lower third molar area upon closure of the mouth and causes ulceration (Fig.10.6).

6. Buccally erupting upper third molar impinging on the coronoid process during mandibular movements leads to pain during movement. Furthermore traumatic ulceration and hyperkeratosis of the buccal mucosa also can occur due to constant irritation. 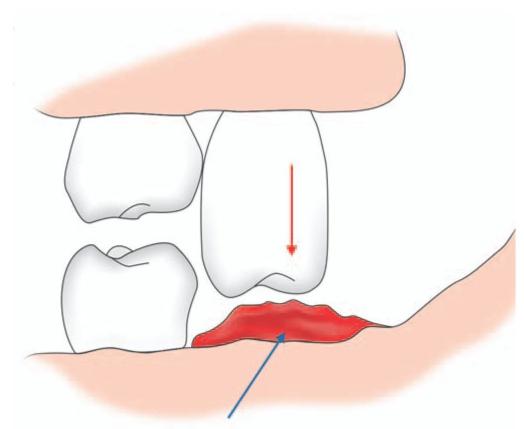 2. Upper third molar positioned high in the alveolussurgical removal of such teeth carry the risk of displacing the tooth into the maxillary antrum or infratemporal fossa.

3. Deeply impacted tooth, the removal of which may damage the adjacent second molar.

It has been observed that an impacted upper third molar tooth may begin to erupt and eventually reach the surface making its removal easy.

The following are the useful radiographs-

5.PNS view of maxilla-if associated pathology like cyst or tumor is suspected

6.CT scan-especially if associated pathology like cyst or tumor is suspected. 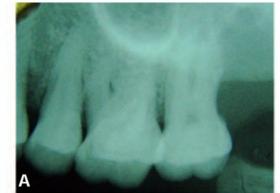 Figs 103A and B: (A) Impacted left maxillary third molar not visible in the periapical X-ray, (B) OPG of the same patient showing impacted 28 placed high in the tuberosity region of the maxilla (yellow circle) 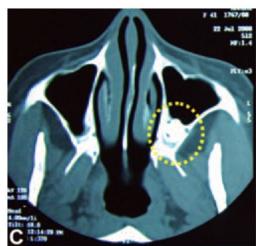 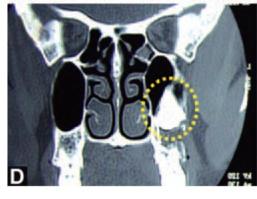 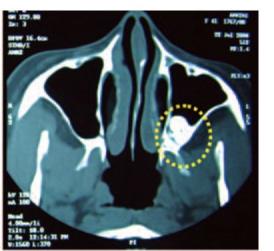 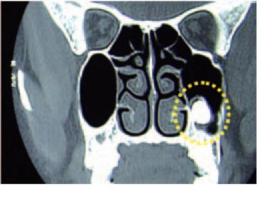 Determining the Degree of Difficulty of Removal

2. Position in buccoangular direction: This also contributes to determining the degree of difficulty of removal. Generally crown of maxillary third molars are directed towards the buccal aspect of the alveolar process. This makes the overlying bone thin and easy to expand. In such cases, a definite bulge can be felt on the buccal aspect. Rarely, the impacted maxillary third molar is positioned towards the palatal aspect of the alveolar process. This necessitates removal of more bone to gain access and thereby increases the difficulty of removal. When the crown is directed palatally, a bony deficit may be palpated on the buccal aspect of alveolar process. Digital palpation followed by radiographic examination will help to determine the buccopalatal position of maxillary third molar.

3. Type of overlying tissues or Degree of eruption: Similar to mandibular molars; tooth which has only soft tissue covering is easier to remove than complete bony impaction.

4. Proximity to maxillary sinus: Frequently the impacted maxillary molar is in close approximation to the floor or posterior wall of the maxillary sinus. Removal of such tooth may result in oro-antral communication or displacement of the tooth into the sinus. Necessary steps should be taken to prevent this.

5. Proximity to maxillary tuberosity: Because of proximity of impacted tooth to tuberosity, it can be fractured during extraction of impacted maxillary third molar. Factors contributing to this hazard are:

•Dense and non-elastic bone as in old age

•Large maxillary sinus expanded to include the roots of third molar

•Use of excessive force to elevate the tooth which has divergent roots.

•Mesioangular impactions where the tuberosity is frequently heavier and surrounding bone thinner.

6. Other factors influencing the degree of surgical difficulty : These factors are similar to that of impacted mandibular third molar. Morphology of the tooth especially that of the root plays a vital role in this regard.

•Tooth with roots which are thin, separated and with curvature are difficult to extract. Fortunately majority of maxillary third molars have fused conical roots.

•Bone when it is less dense and more elastic as in young patients makes extraction easier. While in old age when bone becomes denser and less elastic removal of tooth is more complicated.

•Close relationship of a deeply impacted tooth to adjacent second molar makes the removal difficult, since more bone should be removed to avoid damage to second molar.

•Presence of large restoration on second molar requires the judicious use of elevator to luxate the impacted tooth.

•Difficult access due to small oral aperture or trismus complicates the removal. 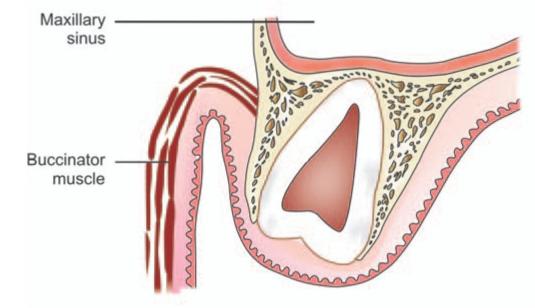 Fig. 10.8: Schematic diagram showing the relationship of impacted maxillary third molar to the floor of the maxillary sinus

e.Buccal pad of fat: This is present between the buccinator and masseter muscle. During surgery, accidental perforation of the buccinator muscle by surgical blade or retractor may result in prolapse of the buccal fat pad into the operative field. Sudden visualization of a yellowish material will be distressing for the operator. No attempt is made to remove the prolapsed fat by pulling it out. If this is attempted more fat will come out. Instead, that part of fat maybe resected or pushed back and a suture given.

f.Pterygopalatine fossa: This narrow space is located posterior to the maxillary tuberosity and the pterygoid process forms the posterior boundary. The fossa is limited medially by the vertical plate of palatine bone. Laterally, this fossa communicates with the infratemporal fossa. Excessive pressure exerted in a posterior direction during elevation of an impacted maxillary third molar may cause its displacement into the pterygopalatine fossa.

Tags: A Practical Guide to the Management of Impacted Teeth
Feb 8, 2015 | Posted by mrzezo in Oral and Maxillofacial Surgery | Comments Off on Postoperative Care and Instructions
Premium Wordpress Themes by UFO Themes
WordPress theme by UFO themes