21 Embryology of the head and neck

21
Embryology of the head and neck

Embryology and development have been covered after the main anatomical descriptions in the previous sections, but it is going to precede them in this section. The reason for this departure is that the embryonic development of the head and neck explains much of the mature anatomy which can seem illogical without its developmental history. The development of the head, face, and neck is an area of embryology where significant strides in our understanding have been made in the last few years.

Figure 21.1 is a cross section through the neck region of a 3-week old embryo after neurulation and folding described in Chapter 8. It shows the structures and tissues that contribute to the formation of the head and neck:

• The neural tube situated posteriorly and the ectomesenchymal neural crest cells that arise as the tube closes;

• The paraxial mesoderm anterolateral to the neural tube;

• The investing layer of ectoderm.

The development of all these tissues is intimately interrelated.

21.2 Evolutionary history of the pharyngeal arches

The pharyngeal arches are very ancient structures in the evolutionary history of vertebrates. The arches and their individual components have undergone many modifications during their long history.

In ancestral aquatic vertebrates, as in modern fishes, water was drawn in through the mouth and expelled through a series of gill slits (or branchiae, hence the term ‘branchial arch’) in the sides of the pharynx. Oxygen was extracted as the water was passed over a gill apparatus supported by a branchial arch skeleton moved by branchial muscles controlled by branchial nerves. Although ventilation and respiration is now a function of the lungs in land vertebrates, the pharyngeal arches persist during vertebrate development. The gill slits are represented by an external pharyngeal cleft and an internal pharyngeal pouch between each pharyngeal arch sealed by the closing membrane; the membrane does not rupture to form actual slits in animals that do not possess gills. As you will see, the derivatives of the arches, clefts, and pouches become incorporated into other structures of the head and neck and have been modified to serve other purposes.

21.3 Formation of the pharyngeal pouches

The key to the formation of the pharyngeal arches is the differentiation of the endoderm to form the pharyngeal pouches on the inner aspect of the foregut. If this does not occur, the pharyngeal arches do not form and their derivatives are, therefore, absent. Essentially, specific regions of endoderm differentiate to form pharyngeal pouches, thus defining the anterior and posterior limits of each pharyngeal arch. There were six pairs of arches in early vertebrates; in modern ones, the fifth is a transitory structure at most if it exists at all. The fourth and sixth arches coalesce to form a single arch as the fifth arch regresses; but there is however a fourth pouch, indicating the original division between the last two extant arches. The pouches separating the arches appear in a superior to inferior sequence. As shown in Figure 21.2, the first pouch is between the first and second arches, the second between the second and third, the third between the third and fourth arch, and the fourth pouch below the fourth arch. During neural tube closure, ectomesenchymal cells migrate from the neural crest and invade the arches; the arches bulk out, deepening the intervening pouches and clefts considerably. The pouches are also shown in Figure 21.3A.

Fig. 21.1 A cross section through the head of a 3-week embryo. A) Arrows indicate the early migration routes of ectomesenchyme (black and green arrows) and paraxial mesoderm (red arrows); B) Later differentiation of tissues from ectomesenchyme (outlined in yellow) and mesoderm. 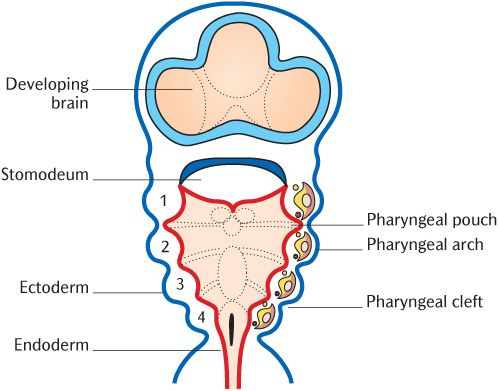 Fig. 21.2 The pharyngeal arches in the floor of the pharynx after removal of the posterior part of the embryo.

The differentiation of pharyngeal endoderm into pharyngeal pouches at specific locations is dependent on signalling by retinoic acid. If retinoic acid is absent, the first pouch and first arch will still form, but the second arch is severely reduced and the lower arches are absent.

Fig. 21.3 The rhombomeres and internal tissues of the pharyngeal arches in an exploded view. The vertical dotted lines indicate how the axial levels of each frame correspond. A) The pharyngeal pouches. B) The rhombomeres and cranial nerves. C) The homeobox code. D) The migration of ectomesenchymal tissue into the pharyngeal arches. E) The paraxial mesoderm and its muscle derivatives. Redrawn after D.M. Noden and P.A. Trainor, Journal of Anatomy 207, 588 (2005).

21.4 Formation of the pharyngeal arches

As mentioned above and in Sections 8.3.4 and 19.3, ectomesenchymal cells migrate from the neural crest, the leading edges of the closing neural tube, into underlying tissues during neural tube closure. In the rhombencephalon, this process is somewhat more elaborate. The rhombencephalon is the only part of the developing CNS that shows true segmentation. Figure 21.3B indicates seven rhombomeres in the future hindbrain; these can be observed as transverse ridges across the rhombencephalon. Figure 21.3C shows that the boundaries between successive pairs of rhombomeres are demarcated biochemically by the superior expression limits of different homeobox (Hox) genes. The expression of these genes at succeeding superior levels produces specific marker molecules within different ectomesenchymal cell populations that give the cells within each rhombomere a unique identity. The ectomesenchymal tissue within each rhombomere proliferates, but is restricted to specific migratory pathways because cells derived from adjacent rhombomeres that carry a different Hox coding will not mix with each other. Follow the arrows in Figure 21.3D to trace which rhombomeres produce neural crest cells to populate each pharyngeal arch. Rhombomeres 1 and 2 do not carry a Hox code and neural crest cells in rhombomeres 3 and 5 do not proliferate, but undergo apoptosis in situ. As indicated by arrows in Figure 21.1A, the cells initially stream out laterally before turning anteriorly under the foregut tube to meet their opposite numbers from the other side. Figures 21.1B and 21.2 show the result of this migration—the formation of a series of curved sausage-shaped blocks of tissue known as the pharyngeal or branchial arches around the foregut. Observe in Figure 21.2 how the pharyngeal pouches and pharyngeal clefts are deepened considerably as the migrating ectomesenchyme invades each arch beneath the walls of the foregut. The endoderm of the pharyngeal pouches meets the surface ectoderm lining the clefts to form a closing membrane.

A subsidiary arch is produced on the upper posterior aspect of each first (mandibular) arch by a second wave of ectomesenchymal migration from the upper two rhombomeres around six weeks post-fertilization. This is the maxillary arch which grows forward between the upper aspect of the mandibular arch and the ectoderm of the frontal eminence covering the developing brain as indicated in Figure 21.3D. Although the maxillary arches lack skeletal and muscular components, they contribute to the formation of the middle third of the face, including the palate; their role in these developments is described in Chapter 32.

Only the leading ectomesenchymal cells are actively migrating by extending cell processes that adhere to the extracellular material between cells and pull the cells forwards; the subsequent cells are attached to the leading cells and are dragged behind as cords of cells. These cords carry in front of them a section of the paraxial mesoderm lying laterally to the neural tube show/>

Tags: Anatomy for Dental Students 4e
Jan 3, 2015 | Posted by mrzezo in General Dentistry | Comments Off on 21 Embryology of the head and neck
Premium Wordpress Themes by UFO Themes
WordPress theme by UFO themes