2 Jaw Growth During Formation and Eruption of Deciduous Teeth

Jaw Growth During Formation and Eruption of Deciduous Teeth

Growth of the Body

The form and proportions of the body of a newborn are attuned to the functioning of the systems that are of vital importance. The head, with the neurocranium housing the central nervous system, and the trunk, containing the cardiovascular system and the respiratory and digestive tracts, dominate the other parts of the body. The arms and legs are small; the neck is short. The child grows and learns quickly during the first years of life. The brain operates as that of a scientist and absorbs and digests a tremendous amount of information.1 The body develops further so it can function on a broader scale. The child learns to walk and speak and acquires many other skills. In the meantime, body proportions alter, which continues at a decreasing rate until adulthood is reached.

In general, the body grows gradually. There is extensive growth during the first years and a growth spurt during the juvenile and adolescent years (Fig 2-1). During puberty, the physical and mental development occurs more in spurts than evenly. Successively, various parts of the body experience a growth spurt, starting with the extremities, with the separate parts of the extremities also experiencing individual growth spurts. For example, the sequence of the short periods of rapid growth for the leg is: the foot, then the lower leg, and finally the upper leg. After the fast growth of the extremities, the hip and chest width increase rapidly, followed by the shoulder width (boys) and finally the rump length and chest depth.3,4 Last, the mandible experiences a growth spurt, in boys more than in girls.5,6 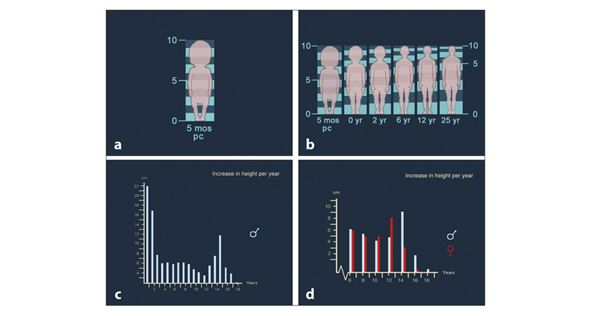 Fig 2-1 Alterations in body proportions and in velocity of growth from the 5th month postconception (pc) until adulthood. (a and b) The head of the newborn constitutes about one-quarter of the total body length, the trunk almost half of it. These values are, respectively, at 6 years 16% and 42%, at 12 years 14% and 40%, and in the adult 12% and 33%.2 (c) The increase in the total body length (stature) shows rapid growth in the first year, somewhat less in the second year, and an acceleration during adolescence. (d) Boys have a later-occurring adolescent growth spurt and a larger and longer-lasting one than girls.3

Growth of the Head

Alterations in proportions occur in the head also. In the newborn, the splanchnocranium comprises only a small part of the total head, while the neurocranium, more than any other part of the body, has already realized a substantial portion of its ultimate size. In the first years, the neurocranium grows considerably, and at 6 years of age 90% of the ultimate size is reached. The proportion between the sizes of neuro- and splanchnocranium starts to alter shortly after birth. The splanchnocranium exceeds the neurocranium in growth (Fig 2-2). In the neonatus, the parts of the head that contain the brain and eyes are larger in relation to the structures situated inferior to them than they are at a later stage (Fig 2-3). In a 7-month-old fetus, the neurocranium and eye sockets have attained more of their adult dimensions than the maxilla and mandible. The piriform aperture is still situated mainly between the eyes and the nasal floor that is close to the inferior border of the eye sockets. The morphology of the maxilla and mandible is determined greatly by the tooth buds (Figs 2-4 and 2-5).

Fig 2-3 Proportional change of the head. In these illustrations, the brain and the eyes are colored orange. (a) From birth until adulthood, the face grows more than the rest of the head. Images show actual proportions. (b) Head of the newborn enlarged to adult dimensions.

Fig 2-4 Skull of a 7-month-old fetus. (a and b) The neurocranium and the eye sockets constitute a large part of the skull. The jaws are developed little. (c and d) The mandible has a diminutive ramus and a small ridge at the lower border with a broad portion above that contains the tooth buds.

Fig 2-5 Skull of a newborn. The bony structures below the eye sockets have undergone little development. (a and b) The floor of the piriform aperture is slightly inferior to the lower ridge of the eye sockets. There is also little vertical development of the jaws. The mandible still exists in two halves, left and right, with the symphysis in between. (c and d) The morphology of the toothbearing parts of the jaws reflects the location, size, and shape of the tooth buds. In this stage, the jaws do not make contact during swallowing and closing; the tongue lies in between. 7

As is the case for the body as a whole, the proportions of the neonatal head are based on the functions of vital importance directly after birth—breathing and food consumption. Consequently, within the splanchocranium itself, proportional changes occur also. A nursing child has to be able to breathe and swallow simultaneously, to which the anatomy and physiology is adapted. Erupted teeth are undesirable at that stage because they are a hindrance in breastfeeding. Very rarely (less than 1 in 1,000 births), small mandibular anterior teeth are present at birth, called natal teeth. They can also emerge in the following month, in which case they are called neonatal teeth. If these teeth damage the tongue of the child or the feeding breast, removal can be considered. This measure has no negative effects on the development of the dentition.8,9

Figure 2-6a shows the reconstruction of the face of a fetus of 9 weeks in which various structures are specified by color. The formation of the splanchnocranium starts early. In week 12 after conception, part of the splanchnocranium is already calcified, and rapid formation of cartilage structures, which later will be transformed into bone, takes place. In contrast to bone, cartilage has the potential for interstitial growth and hence can increase in size rapidly (Fig 2-6b). After calcification has occurred, bone can only increase by apposition at surfaces.

Fig 2-6 Model and specimen showing prenatal facial development. (a) Three-dimensional reconstruction of the face of a 9-week-old fetus, based on a series of histologic slides. (Illustration by R. R. Radlanski.) (b) In a 22-week-old fetus, bone is colored red and cartilage blue. The bone is more spongeous in the maxilla than in the mandible. (Printed from Van der Linden et al10 with permission.)

Growth of the Jaws

As previously indicated, the jaws of the newborn are small in comparison with the rest of the head. In addition, the mandible is posteriorly positioned in relation to the maxilla. In the first months after birth, the parts of the jaws that contain the tooth buds grow considerably.

Fig 2-7 The mandible of a 20-week-old fetus. The mandible is narrow in the region where the incisors are formed (a) and broad where the molars develop (b). (Printed from Van der Linden et al10 with permission.)

During the prenatal period and also some time after birth, the anterior teeth are rotated or overlapping.16 Figure 2-8 shows tracings of radiographs of the jaws of six specimens with increasing levels of development. The arrangement of the anterior teeth is not the same in these six specimens. Variations exist in that respect as indicated in Fig 2-9. Prior to birth, the size of the anterior parts of the jaws does not increase much or any more than the sum of the widths of the crowns they contain.16,19

It is assumed that the rotated and overlapping arrangement of the anterior deciduous teeth does not change before birth because the space needed for this does not become available. This will occur in the first 6 months after birth (Fig 2-10). 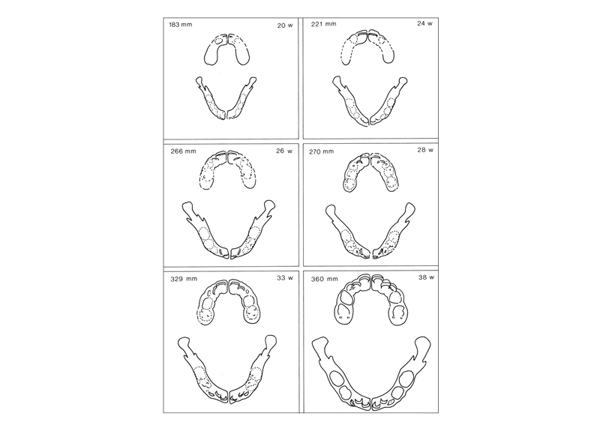 Fig 2-8 Tracings of radiographs of six sets of jaws of fetuses at increasing stages of development. The numbers in the drawings indicate the crown-rump length of the fetus in millimeters (mm) and the estimated age, expressed in weeks (w).17 The tracings provide insight into the increase in size of the jaws as a whole and of the parts that contain the teeth. In all six specimens, the anterior teeth are rotated or overlap each other. The arrangement of the incisors varies among the jaws. Overlapping of first and second deciduous molars is not seen and does not occur.18 When evaluating the drawings, one must keep in mind that if these six fetuses had survived, the individuals would have developed teeth and jaws of different sizes. One child will attain larger teeth and jaws than another. Hence, comparison of the dimensions in this figure has some limitations. (Reprinted from Van der Linden et al16 with permission.)

Fig 2-9 Position of teeth prior to birth. A radiographic investigation of the dissected jaws of 28 fetuses revealed for both jaws four patterns of arrangement of deciduous incisors. In all specimens, the maxillary central incisors were oriented perpendicular to the median plane. The frequency of occurrence of the different patterns is indicated in the figure. (Reprinted from Van der Linden et al16 with permission.) 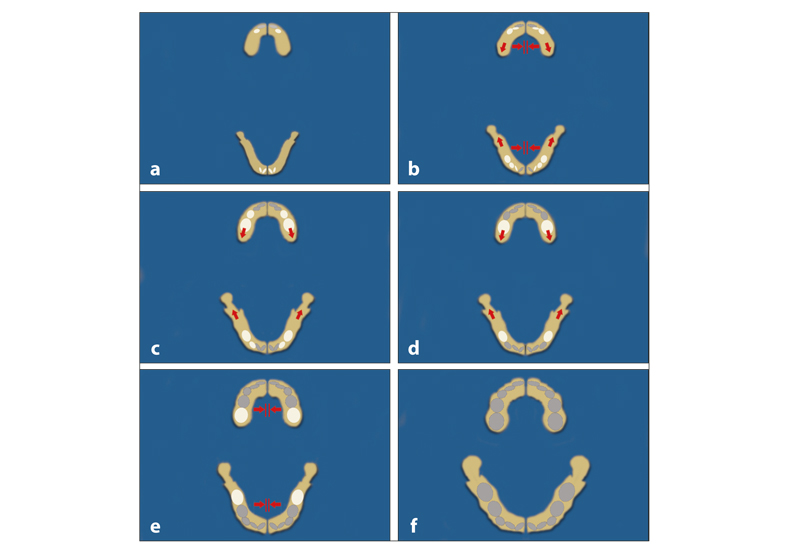 Fig 2-10 Occlusal overview of the relationship between jaw growth and tooth development. (a) Twenty weeks after conception, the jaws are small. The maxillary central deciduous incisors and the four mandibular deciduous incisors have started their mineralization. (b) The jaws become wider by bone formation in the median regions. (c and d) Growth to the posterior provides room for the gradually increasing and locally mineralizing molars. (e) The growth in the median regions is insufficient for an improvement in the position of the deciduous incisors. (f) In the newborn, the crowns of all deciduous teeth are completely or partially mineralized.

The size of the jaws increases to the extent that the deciduous incisors can attain a good position prior to emergence.21 Indeed, irregular arrangement of deciduous teeth is rare. Sometimes an incomplete correction of a rotated incisor is seen even when sufficient space is available.

The development of the dentition from birth until the complete deciduous dentition stage is presented in Figs 2-11 and 2-12. After emergence, the eruption of deciduous teeth lasts about 6 months, with a rapid period of eruption in the first 3 months.22 For times of emergence, tooth dimensions, and stages of root development, see chapter 17.

Fig 2-11 Overview of the dentition and jaws from birth to 3 years of age. (a) At birth, the jaws are still small. (b) In the anterior regions, the tooth buds are rotated or overlap each other. (c) Sufficient space is available for the forming deciduous molars. (d) From birth to 6 months of age, the jaws grow considerably in the median regions. Prior to emergence, sufficient room becomes available for the deciduous incisors to migrate mesially and attain a good position.

Fig 2-11 (cont) (e) The mandibular symphysis ossifies prior to the eruption of the mandibular central deciduous incisors. Subsequently, no more transverse growth can occur in the median region of the mandible. The median suture in the maxilla maintains its growth potential until adulthood. (f) Both jaws continue to grow posteriorly, resulting in space for distal migration of the gradually developing deciduous molars. The jaws continue to increase in width by bone apposition at the surfaces. (g) Subsequent to the incisors, the first deciduous molars emerge, and occlusion becomes established. Some time later the deciduous canines appear. (h) In the meantime, the growth of the jaws to the posterior provides space for the second deciduous molars, which emerge about 1 year after the first ones. Further growth to the posterior provides space for the first permanent molars. The permanent incisors overlap each other and will not improve in position prior to emergence. The premolars have sufficient space within the jaws. 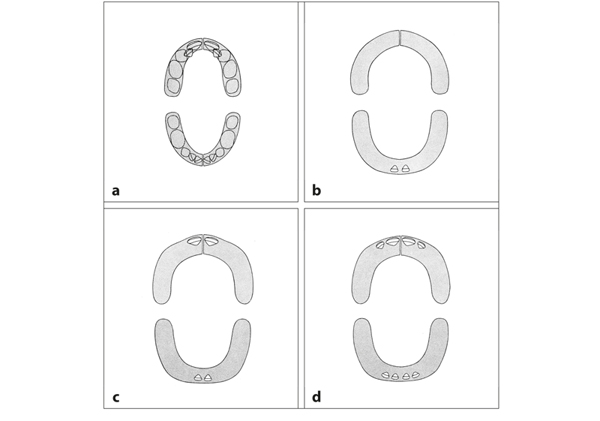 Tags: Development of the Human Dentition
Jan 4, 2015 | Posted by mrzezo in General Dentistry | Comments Off on 2 Jaw Growth During Formation and Eruption of Deciduous Teeth
Premium Wordpress Themes by UFO Themes
WordPress theme by UFO themes