2: Diagnosis and management of toothwear in children

Diagnosis and management of toothwear in children

Toothwear in children and adolescents is a common condition with a prevalence rate severalfold that of caries. It may begin in the primary dentition of a young child and persist to involve the permanent dentition in adulthood. As many children with mild-to-moderate toothwear do not complain of symptoms, by the time of presentation the condition can be associated with extensive destruction of the primary and young permanent dentition, loss of aesthetics and masticatory function, pulpal exposure and abscess formation (Linnett & Seow 2001). In children, toothwear usually results from a combination of attrition, abrasion and erosion (Fig. 2.1). Of these, dental erosion is usually the predominant underlying mechanism, and involves extrinsic acids from dietary intake (Fig. 2.2) or intrinsic gastric acids.

The influence of abrasion is usually minimal. As toothwear in children has traditionally not been well recognised clinically, the condition is often undiagnosed until extensive tooth structure has been lost and poses a restorative challenge (Fig. 2.3).

CLINICAL PRESENTATIONS OF TOOTHWEAR IN CHILDREN

Primary teeth are more susceptible to toothwear compared to permanent teeth due to structural differences such as lower degrees of crystallite arrangement and mineralisation, greater amounts of water and increased permeability (Johansson et al. 2001). Also, the thinner enamel and dentine layers in primary teeth together with larger pulp chambers can lead to more rapid pulpal inflammation and exposures from toothwear. Furthermore, immaturity of the salivary glands in children may be associated with less salivary protection from erosion due to relatively low flow rates and less secretory capacity compared to adults (Watanabe & Dawes 1990).

Figure 2.1 Erosion is usually the predominant contributing aetiology in toothwear in most children, with attrition playing a secondary role and abrasion a minimal role. 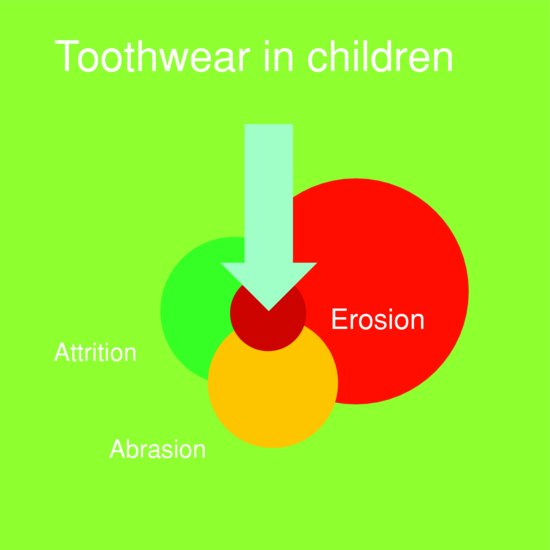 Figure 2.2 Incisal toothwear in a 5-year-old boy with a history of frequent soft drink consumption. His mother reported occasional night-time grinding of teeth. 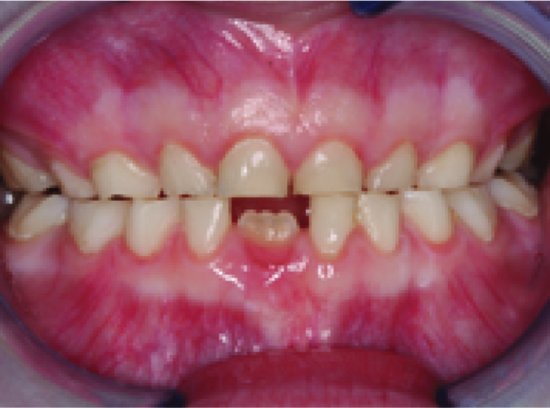 In the primary dentition, it is often difficult to discriminate between the individual effects of erosion, attrition and abrasion as all these processes usually occur concurrently and contribute to the overall clinical appearance of the lesions. It is notable that cervical toothwear lesions are rare in children, probably due to the relatively short time the primary teeth are present in the mouth and the fact that gingival recession and exposure of cementum surfaces are uncommon in children. Toothwear is thus predominantly observed in the occlusal surfaces of the primary, mixed and early permanent dentitions.

Toothwear facets in the primary and permanent dentitions which result from normal occlusal contacts can be found in most dentitions, and in milder forms, they can be considered physiological. Facets resulting from physiological toothwear usually appear as well-demarcated regions on occlusal surfaces and cuspal inclines. The processes of dental erosion can underlie these facets to result in rapid loss of tooth structure. In the late mixed dentition, differences in wear of the primary teeth and the permanent successors are readily discernible (see Fig. 1.14). These differences result from the length of time of exposure to toothwear processes as well as differences in structural composition of primary and permanent teeth. Effects of loss of vertical dimension occur with advanced toothwear, and these are further detailed in Chapter 10. Erosion lesions may often be distinguished by their characteristic appearance. In the earliest stages, an erosion lesion usually presents as a smooth, glazed surface with increased incisal translucency, loss of surface anatomy and chipping of the incisal edges (Ganss & Lussi 2006). With further attack from acid, the cusps, grooves and incisal edges often become rounded, there is loss of occlusal morphology (Figs. 2.4a & b), and the smooth surfaces appear concave, dished out or cup shaped (Khan et al. 2001).

Figure 2.3 Anterior view of a 6-year-old boy with a history of gastro-oesophageal reflux disease, showing severe toothwear in the primary anterior teeth (a). The maxillary teeth are severely affected by erosive toothwear (b). Whilst the recently erupted mandibular teeth show minimal wear, the primary molars and canines are moderately worn (c). Left- and right-sided buccal views of the teeth in occlusion highlight the severe loss of occlusal vertical dimension (d) and (e). 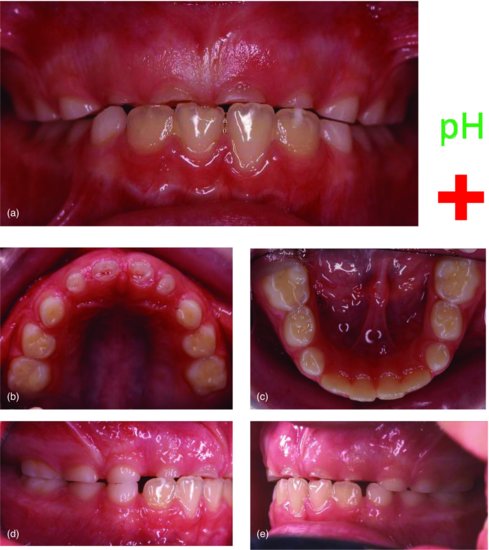 Figure 2.4 Sites of toothwear in maxillary teeth are commonly found on the palatal aspects (a), whereas those of the mandibular teeth are usually located on the buccal aspects (b). 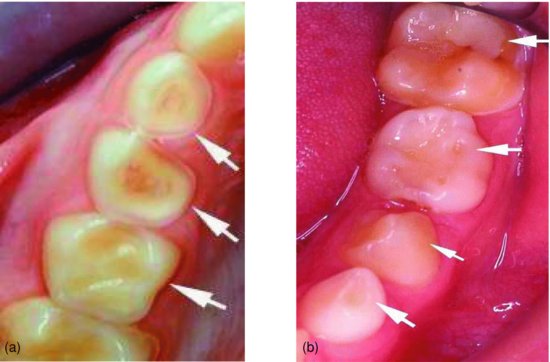 Exposure time, patterns of consumption as well as clearance of acidic foods and beverages are important contributing variables which influence the site specificity of erosion lesions. The parts of the dentition which are most susceptible to dental erosion compared to those affected by dental caries are contrasted in Table 2.1.

As with adults, the common sites for erosion lesions in children are also heavily influenced by salivary flow and clearance patterns. The locations of the parotid gland openings on the buccal surfaces of the maxillary molars and the submandibular and sublingual glands openings on the lingual surfaces of the mandibular teeth allow the tooth surfaces approximating these sites to be better protected in relation to the other surfaces.

Table 2.2 Site involvement of toothwear and dental caries in the primary and mixed dentition.

As shown in Figs. 2.4a and b, erosion lesions in children are characteristically first noticed on the buccal and occlusal aspects of the primary mandibular molars, the occlusal and palatal aspects of the maxillary primary molars, and the incisal surfaces of the maxillary primary incisors. Furthermore, in cases where the source of acid is external, the location of the erosion lesions may vary according to whether the drink is consumed through a straw (minimal lesions) or gulped and swished in the mouth prior to swallowing (extensive lesions) or suckled through a baby bottle (mainly on the palatal aspects). The frequency of exposure and duration of the acid drink held in contact with teeth may also affect the severity of the lesions (Zero 1996).

Although both erosion and caries result from acid attack on the teeth, the involvement of a bacterial biofilm in the caries process results in caries lesions being different in presentation and site specificity compared to erosion lesions (Table 2.2). These differences help to distinguish erosion lesions from carious lesions and provide an explanation for the involvement of the proximal lesions in caries but not in erosion. Early childhood caries (Fig. 2.5), for example, affects different surfaces compared to erosion in young children (see Fig. 2.2). Importantly, children are predisposed to both caries and erosion in the presence of enamel hypoplasia (Seow et al. 2009). Teeth with structural defects of enamel and dentine are also at risk for rapid toothwear and are further considered later in this chapter. 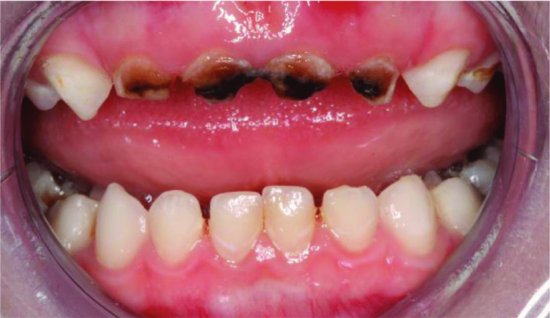 The extent of toothwear and loss of vertical dimension is highly variable in children at any particular age. When assessing children, it is important to consider the length of time a particular tooth has been in the mouth to appreciate the risk for toothwear. For example, in the early and late mixed dentitions, care must be exercised in diagnosing erosion as the newly erupted permanent incisors and first molars may show only minimal wear. On the other hand, wear observed on the primary canines and first and second molars should be carefully assessed for signs of toothwear processes that may continue to affect the new permanent dentition.

A child’s dentition contains a record of past toothwear activity, and the results of a single examination are insufficient to determine the risk for further toothwear. It is prudent to obtain thorough medical, dietary and dental histories to help diagnose the aetiology of the toothwear.

The clinician should check the medical history for conditions that can place a child at risk for toothwear and erosion, including the following:

Taking a thorough dietary history is further discussed in Chapter 3, and should include the following:

The enquiry of toothwear risk factors in a child’s dental history should include the following:

CHILDREN AT INCREASED RISK FOR TOOTHWEAR

In assessing and diagnosing the aetiology of toothwear, an understanding of risk factors for toothwear in children is critical. Table 2.3 provides the groups of children who are at increased risk for toothwear. A high frequency of consumption of beverages and foods with erosive potential is the most common risk factor for toothwear in children. In addition, children who have gastro-oesophageal reflux conditions, oral habits such as bruxing and reduced salivary function, as well as developmental abnormalities of enamel and dentine structure, are also predisposed to increased risk for toothwear.

Figure 2.6 Anterior view of a 5-year-old girl with a history of frequent consumption of soft drinks, showing severe toothwear in the primary anterior teeth (a). The maxillary anterior teeth show severe erosive toothwear, and the right primary central incisor is darkened and non-vital due to exposure of the pulp from toothwear (b). Incisal and occlusal wear is evident on the mandibular primary incisors, canines and molars (c). 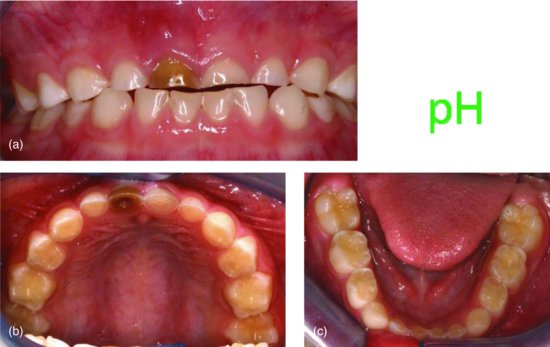 Children who frequently consume beverages and foods with erosive potential

Extrinsic acids derived from soft drinks, fruit juices and carbonated beverages are currently the most common cause of erosion in children and adolescents. There has been a recent global increase in the consumption of carbonated beverages, particularly among children and adolescents of all ages. The effects of erosion on the teeth may be direct or enhanced by secondary attrition of demineralised tooth structure (Fig. 2.6). Children who habitually consume acidic drinks during times of reduced salivary flow, such as during or after strenuous physical activity, are at increased risk for dental erosion. The severe toothwear reported in athletes is often attributed to consumption of acidic sports drinks during times of dehydration and low salivary flow (Milosevic 1997).

Less common extrinsic sources of acid which have been reported to cause erosive toothwear include medications in the form of liquid and effervescent acidic tablets formulated for children. Many oral drug preparations are rendered acidic in order to facilitate drug dispersion and improve palatability and patient compliance. Children who constantly consume such oral medications for chronic diseases are at increased risk for erosion/>

Tags: Toothwear The ABC of the Worn Dentition
Jan 5, 2015 | Posted by mrzezo in General Dentistry | Comments Off on 2: Diagnosis and management of toothwear in children
Premium Wordpress Themes by UFO Themes
WordPress theme by UFO themes