Toothwear may be due to abrasion, attrition, acid erosion or some combination of these processes. Abrasion occurs from the action of foreign bodies rubbing against the teeth. An example is the use of a hard toothbrush and an abrasive toothpaste. Attrition is the wear which occurs from repeated contact between opposing teeth, a process which is accentuated in patients with bruxism. Acid erosion is due to exposure of the teeth to extrinsic acid which is unsaturated with respect to tooth mineral. There are many different types and possible sources of such acids and they include gastro-oesophageal reflux disease (GORD, in which a weak gastro-oesophageal sphincter allows gastric juice to enter the oesophagus and then the mouth), bulimia (deliberate vomiting), acidic, soft or sports drinks, fruit juices, wine, acid fumes in the workplace, acidic medicaments, such as aspirin, and exposure to the water in an improperly chlorinated swimming pools. Of these, the hydrochloric acid in gastric juice is probably the most potent as its concentration in it is about 0.1 mol/L. It is the plaque-free surfaces of the teeth which are attacked by these acids and they dissolve the very surface layers of the enamel (ten Cate 1979). The buccal, lingual and occlusal surfaces of the teeth are particularly affected and the approximal surfaces almost never. Loss of enamel may take a long time to be noticeable, but complete loss has been reported to occur in as little as 2 weeks after prolonged daily exposure to the water in an improperly chlorinated (low-pH) swimming pool (Dawes & Boroditsky 2008). The citric acid present mainly in fruit juices can act not only as an acid but also as a chelating agent for calcium ions, even when the pH is close to neutrality. 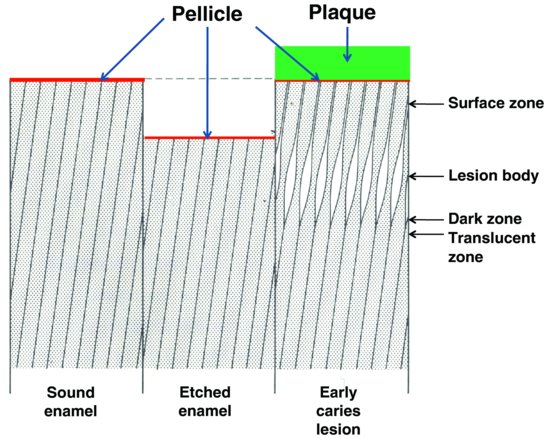 Dental caries is also caused by the action of acid on the teeth. However, in contrast to acid erosion, caries is caused by those acids, primarily lactic and acetic acids, which are produced from fermentable carbohydrates by acidogenic microorganisms in dental plaque. Thus, caries can only occur at sites on the tooth which are covered by dental plaque and will progress only when the pH of the plaque is less than the so-called critical pH (about 5.1), at which the fluid phase of plaque (plaque fluid) becomes unsaturated with respect to tooth mineral. Some investigators suggest that caries is primarily due to the metabolic activity of strongly acidogenic microorganisms, such as Streptococcus mutans (Tanzer 1995), and that colonisation of the mouth by mutans streptococci is the critical factor in whether caries will occur. However, many of the microbial species in plaque are acidogenic, and Hardie et al. (1977) have found caries under plaques in which the presence of S. mutans was not detectable. An alternative view (Marsh 2003) is the ‘ecological hypothesis’ that frequent consumption of fermentable carbohydrate (i.e. sugars which can be converted to acid by plaque microorganisms) will favour the growth and predominance of microorganisms which are acidogenic (i.e. ones which can form acid from sugars) and aciduric (i.e. ones which can survive under acidic conditions). So if fermentable carbohydrates are consumed frequently, the proportions of acidogenic and aciduric microorganisms in undisturbed plaque will increase and caries will be more likely to progress whenever fermentable carbohydrates are consumed. Thus, the ecological hypothesis suggests that the frequency with which fermentable carbohydrates are consumed is the key factor promoting dental caries.

A critical difference between acid erosion and dental caries is that the latter begins largely as a subsurface, rather than a surface lesion (Fig. 5.1), and the lesion may extend into dentine before the relatively intact surface zone of the enamel (about 30 μ m thick) breaks down to create an actual cavity.

Another difference between acid erosion and caries is that the former usually involves relatively short exposures (seconds) of the teeth to acidic fluids, whereas after consumption of fermentable carbohydrate, the plaque pH may fall below the critical pH for several hours.

WHY DOES A TOOTH DISSOLVE IN ACID?

The mineral phase of enamel and dentine is composed of an impure form of hydroxyapatite (HA) which contains many trace elements, such as carbonate, which increases its solubility, and fluoride, which decreases its solubility. The structural formula of HA is Ca10(PO4)6(OH)2, and when this is in contact with water, a small amount slowly dissolves to release calcium, phosphate and hydroxyl ions:

The solubility of an ionic material, such as HA, is described by its solubility product (Ksp), which is the product of its component ions (in mol/L) raised to the appropriate power in a solution saturated with HA. This is equal to [Ca]10 · [PO4]6 · [OH]2, where the values in square brackets represent the activities of the component ions. Since HA is relatively insoluble in water, and the ionic activities are measured in mol/L, the Ksp has a very low value of about 10−117 (Larsen & Bruun 1986). This value is a constant, but the concentrations of the three component ions may vary in different saturated solutions, provided that their product remains at 10−117.

For any given fluid such as saliva, wine or a sports drink, one can make a similar calculation from the calcium, phosphate and hydroxyl ion concentrations in these fluids to obtain a value termed the ‘ion product’ (Ip). This can then be compared with the Ksp. If Ip = Ksp, the solution is just saturated with respect to HA. If Ip > Ksp, it is supersaturated and HA will tend to precipitate out until it becomes saturated, while if Ip < Ksp, the fluid is unsaturated and HA will tend to dissolve in it until it becomes saturated.

The solubility of HA in water at pH 7 is about 30 mg/L, but since the solubility increases about tenfold for each unit fall in pH, the solubility is about 30 g/L at pH 4 (Larsen & Bruun 1986). Although the concentration of calcium in a solution is virtually independent of pH, the hydroxyl concentration changes inversely with the hydrogen ion concentration, as the product [H+] · [OH−] always equals 10−14 (mol/L)2. Thus, in gastric juice at about pH 1, [H+] = 10−1 mol/L, but [OH−] = 10−13 mol/L. In addition, in any fluid containing inorganic phosphate, the phosphate is present in four different forms: H3PO4, H2PO4−, HPO42− and PO43−, and the proportions change with pH, as shown in Fig. 5.2 (Dawes 2003).

Figure 5.2 The effect of pH on the concentrations of the four different species of inorganic phosphate in saliva containing a total phosphate concentration of 5 mmol/L, as is typical of whole saliva. There is a marked decline in the PO43− concentration (thick red line) as the pH falls. (From Dawes, 2003, by permission of the Journal of the Canadian Dental Association.) 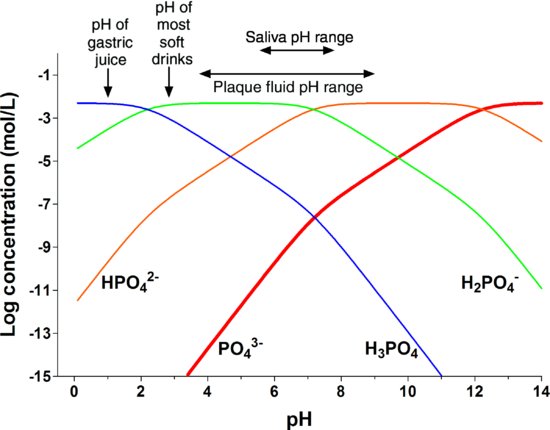 It is the PO43− form of phosphate which contributes to the Ip and Ksp for HA and the fraction of phosphate present as PO43− decreases markedly as the pH falls. Thus, very acidic solutions will contain very low OH− and PO43− concentrations such that usually the IpHA < KspHA and the mineral of the tooth will begin to dissolve in the acid.

The critical pH of a solution is the pH below which the solution becomes unsaturated with respect to HA. For saliva, the critical pH varies from 5.5 to 6.5 in different individuals (Ericsson 1949), the lower values being for saliva that contains higher calcium and phosphate concentrations. Since plaque fluid contains more calcium and phosphate than does saliva (Tatevossian & Gould 1976), its critical pH is about 5.1. During a Stephan curve, which is the fall and subsequent rise in plaque pH after exposure of plaque to a fermentable carbohydrate, caries will progress only during the period when the plaque pH is less than about 5.1.

SOURCES AND COMPONENTS OF SALIVA RELEVANT TO TOOTHWEAR AND CARIES

The fluid phase of whole saliva is a mixture of secretions from three pairs of major glands, namely the parotid, submandibular and sublingual, together with those from numerous minor mucous glands in the lips, cheeks and soft palate and secretions from the small glands in the foliate and circumvallate papillae of the dorsum of the tongue. Table 5.1 shows the primary nature (serous or mucous) of the secretions from different salivary glands, as well as their percentage contributions to whole saliva when the flow rate is unstimulated and when it is strongly stimulated.

Table 5.1 Some characteristics of the different types of saliva.

Figure 5.3 shows, diagrammatically, the probable net direction and volumes of saliva flow from the different glands at different locations in the mouth. The lingual and palatal surfaces of the teeth and the buccal surfaces of the molar teeth receive the greatest protection from the serous secretions of the major salivary glands.

Figure 5.3 Diagrammatic representation of the anticipated directions and volumes of salivary flow in different locations in the mouth. (From Lecomte & Dawes, 1987, by permission of Sage Publications.) 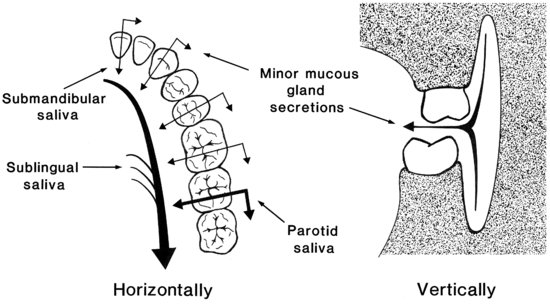 Whole saliva also contains components of non-salivary origin, including gingival crevicular fluid (except in the edentulous), desquamated epithelial cells, microorganisms, metabolic products from the microorganisms, viruses, fungi and possibly food debris, expectorated bronchial secretions and blood. The total volume of saliva secreted each day has been calculated to be about 600 mL (Watanabe & Dawes 1988). When whole saliva is collected into a container, it has usually been assumed that all surfaces of the mouth have been exposed to this fluid. However, the proportions of the different secretions which make up whole saliva vary considerably at different sites in the mouth (Sas & Dawes 1997), even during gum chewing, which might have been expected to cause efficient mixing of the various salivary secretions. Thus the fluid environment of the mouth shows marked site specificity.

Figure 5.4 The circadian rhythm in the unstimulated salivary flow rate. The dramatic reduction in flow rate during sleep is also shown schematically. 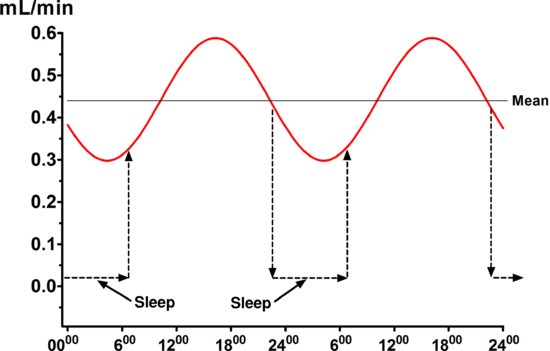 Tags: Toothwear The ABC of the Worn Dentition
Jan 5, 2015 | Posted by mrzezo in General Dentistry | Comments Off on 5: Salivary protection against toothwear and dental caries
Premium Wordpress Themes by UFO Themes
WordPress theme by UFO themes