18. Modalities of Management of Impacted Canine 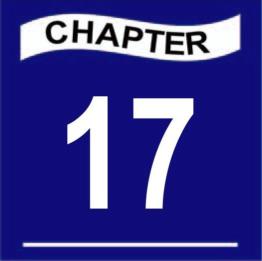 Management of impacted canine requires precision both in planning and execution. It is not enough for the dental surgeon to know that an unerupted tooth is present. Rather the exact position of the tooth and its precise relationship to other erupted teeth should be established. The presence and position of the canines can be ascertained by three simple methods: visual inspection, palpation and radiography.

Patients should be examined by eight or nine years of age to determine whether canines are erupting in a normal position and to assess whether the potential for impaction exists (Abron et al, 2004).1 Early detection may reduce treatment time, complications, complexity and cost. Locating the exact position is important to decide the best treatment option and also to plan the surgical procedure, if any needed. Impacted maxillary canines are found three times as frequently on the palatal side as on the labial side. They are almost always rotated from 60 to 90 degrees on their longitudinal axis and are usually in an oblique position. Frequently they are found in a horizontal position.

Inspection: Evidence of impaction can be observed in an over retained primary canine. Carefully look for any bulge either on the labial or on the palatal side of the arch. Possible signs of impending impaction include: lack of canine prominence in the buccal sulcus by age of ten years, discordance between the exfoliation of the deciduous canine and eruption of permanent canine and the presence of inclination of the lateral incisor crown.

Premolar eruption before canine emergence may also indicate a disturbance in the eruption of the latter.

Adjacent teeth should be examined for mobility and to determine the condition of the periodontal tissues. Vitality testing of adjacent teeth, especially upper lateral incisors, prior to surgery should be done as a routine procedure. It is better to discover that an unerupted canine is related to a non-vital lateral incisor of dens invaginatus type before surgery than after the operation. If a sinus is present a probe should be passed along it in an attempt to feel any underlying tooth. The maxillary canine area is a rare site for supernumeraries but occasionally a dentigerous cyst is found to be present in relation to the crown of the impacted canine.

Palpation- Bidigital palpation of the maxillary canine region from labial vestibule and palatal roof is also useful for the localization of impacted canines. Canines are readily detectable one to one-and-a-half years prior to eruption. It should be noted, however, that asymmetries in the alveolar processes of young children might not always be indicative of canine impaction, but maybe due to vertical differences in eruption.

The clinical signs that implicate an impacted maxillary canine include:

1.Delayed eruption of the permanent canine or prolonged retention of the primary canine.’

2.Absence of a normal labial canine bulge in the canine region.2

4.Loss of vitality and increased mobility of the permanent incisors.4

Radiographic localization helps to supplement the findings of inspection and palpation. In deeply impacted canine bidigital palpation is inconclusive, very often radiography is the only means of localization.

It has been suggested that radiographic evaluation prior to the age of 10 years are of little benefit. Radiographs are indicated before 11 years of age if there is an asymmetric path of eruption as determined by palpation, if the lateral incisor is late in eruption or is tipped labially, if the lateral incisor is missing or there is a family history of impacted canine. After the age 11, radiographs are indicated in all individuals with unerupted and non-palpable canine.

Radiographic examination should be implemented if clinical methods are inconclusive (Figs 17.1A to Q. An ideal radiographic examination of an impacted maxillary canine should reveal not only the shape and position of the root apex, but also the position of the crown, vertical inclination of the canine, presence of any follicular cyst, and above all root resorption of the adjacent permanent teeth. A review of literature revealed that various radiographic and imaging methods have been proposed and are being tried worldwide in the localization of impacted teeth.5’6 Radiographic examinations can be broadly grouped into two: Accurate methods like computerized axial tomography, cone beam, and 3D CAT elaboration such as 3D imaging; in addition to which real 3D stereo-lithographic models can also be generated. The second group is the less accurate methods, which include plain radiographs like panoramic radiography, occlusal radiography, anteroposterior and lateral radiographic views, which are based on image magnification and superimposition. 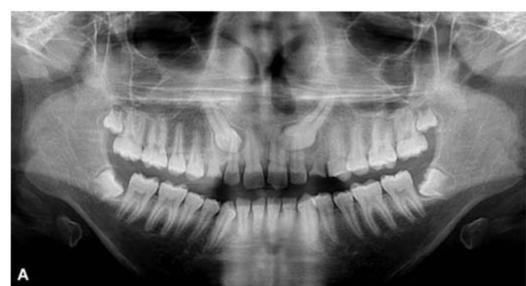 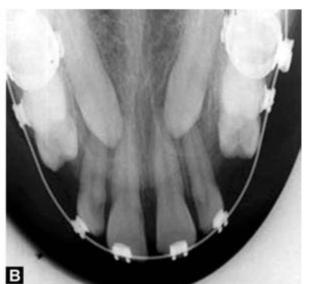 The conventional radiographic methods are based on two main principles:

1.The cone shift or parallax technique, which aims to register the relative displacement of an object in relation to the environment.

This method involves taking of two radiographs and the use of the principle of horizontal or vertical parallax. This method was first introduced by Clark (1909). The horizontal parallax involves taking of two radiographs at different horizontal angles and with the same vertical angulation. Due to parallax the more distant object appears to travel in the same direction as the tube shift and the object closer to the tube appears to move in the opposite direction; the so called Same Lingual Opposite Buccal (SLOB) rule; or this can be equally remembered as Buccal Opposite Palatal Same (BOPS)}. The cone shift technique may also be applied when the radiographs are taken at different vertical angulations (vertical parallax). The different combinations that are commonly tried based on the technique of parallax include:

5.One panoramic radiograph alone when a Panorex machine is being used (Turk and Katzenell,1970).h1

Clark’s rule is extremely useful in cases in which the position of the canines is such as to give a superimposition with respect to a chosen dental reference point. However, care should be taken about the fact that the radiographs being compared should be identical with respect to all other factors other than the angulation of the X-ray beam. It is also unfavorable from a biologic perspective as a single exposure for an intraoral radiograph amounts to about 2.4 to 4.3pS (micro Sievert).

For a given focal spot film distance, objects away from the film will be depicted more magnified than objects closer to the film; this is the principle of ‘Image Size Distortion’ (See Fig. 17.2). 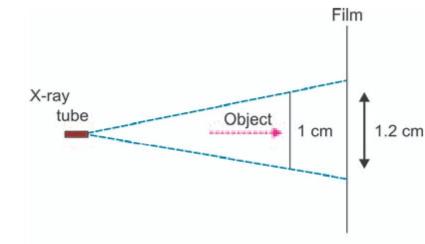 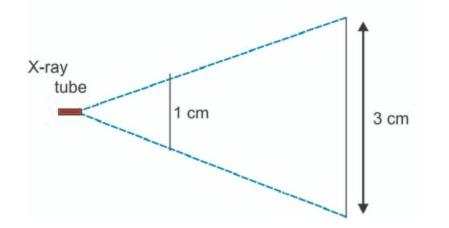 Fig. 17.2: Showing how magnification increases with increase in the object film distance

There are two methods based on this principle:

a. Status-X-Radiography (Ostrofsky, 1976)12-This technique makes use of the fact that the anode of the status-X-machine is considered to have an almost point source of X-radiation. Here a special tube is inserted in the mouth of the patient and the film held around the face by the patient. Hence, there is a point source of radiation and the laws of central projection apply-the object closer to the source is magnified.

b. Panoramic Radiography (OPG) (Figs 17.3 and 17.4)This is a fundamental examination which gives an overview but does not permit precise localization of an impacted canine. The principle of image distortion can be applied in panoramic radiography. If a canine is relatively magnified in comparison to the adjacent teeth in the arch or the contralateral canine, it will be located closer to the tube, i.e. palatally, and if the size is relatively diminished it will be located further away from the tube, i.e. labially. This method is most effective when the canine is not rotated, not in contact with the incisor root and there should be no tipping of the incisor roots.13, 13,14 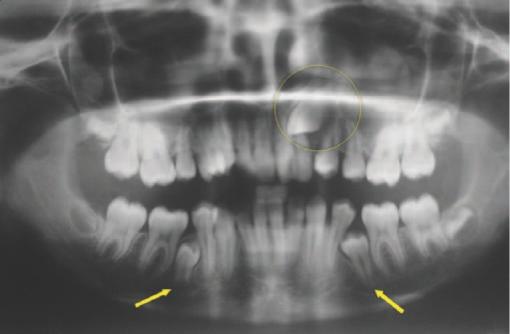 Fig. 17.3: OPG of a girl aged 13 years showing impacted 23 (yellow circle), 35 and 45 (yellow arrows). Even though the clinical examination showed a slight bulge on the labial aspect of the region of 23, during surgery it was noted that the tooth was actually laying labiopalatally with the crown on the palatal side 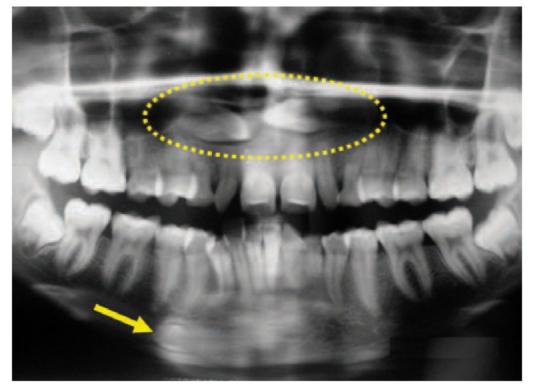 A study conducted by Mason et al in 200115 to compare two different radiographic techniques for localization of impacted maxillary canines: vertical parallax (from a panoramic and a maxillary anterior occlusal radiograph) and magnification (from a single panoramic radiograph), showed that localization with vertical parallax was more successful overall than with magnification.15 Almost 90% of the palatally impacted canines could be correctly detected with both techniques, and only less than half of the buccal canines were detected by parallax and less than 0.1% buccal canines detected by magnification. It has been suggested by many researchers that a single panoramic radiograph alone is not sufficient for proper localization of impacted maxillary canines.13,16-19

Other methods reported for radiographic localization of impacted maxillary canine are the vertex occlusal radiograph19 and the panoramic radiograph, where image sharpness and relationship of the canine cusp tip with the lateral incisor root is assessed. The right angle technique involves two films taken at right angles to each other (Figs 17.5A and B) so that the canine can be located in three dimensions, e.g. lateral skull and posteroanterior cephalogram20 or lateral skull and panoramic radiograph21 or a periapical X-ray and an occlusal X-ray. 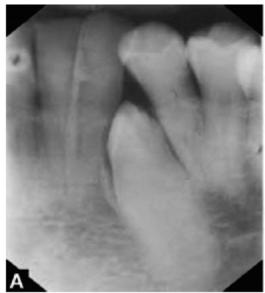 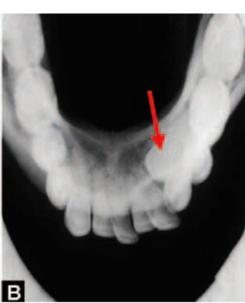 Figs 17.5A and B: The right angle technique

Occlusal radiographs can be made with different angulations. The most frequently used projection for the maxillary canine localization is the true occlusal view (F/>