The World Health Organization (WHO) defines palliative care as “an approach that improves the quality of life of patients and their families facing the problems associated with life-threatening illness … and treatment of pain and other problems, physical, psychosocial and spiritual” (WHO, 2008).

Patients who are terminally ill should benefit from care that focuses on alleviating discomfort and pain, improving quality of life, and avoiding unnecessary and invasive treatments (Lefebvre-Chapiro and Sebag-Lanoë, 1999). Pain and opportunistic infections should be controlled when possible, while physical, functional, psychosocial, and spiritual restrictions should be addressed with care and empathy (Walsh, 1994). Palliative care is a holistic and multidisciplinary service by which the care team treats both the patient and the extended family, typically in specialized hospitals, hospices, geriatric wards, or at home with appropriate support. The team usually involves a physician as head with help from nurses, pharmacist, dietitian, spiritual counselors, and social workers, but dental professionals usually contribute beyond the inner circle of the team (Figure 15.1).

Figure 15.1 A composition of relationships within family-centered care. 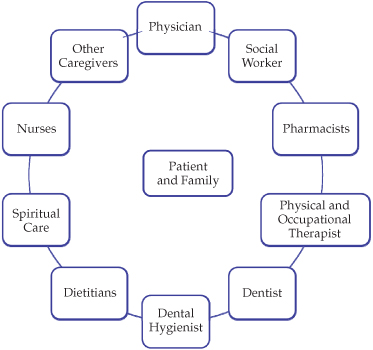 Palliative medicine was introduced for cancer patients who were terminally ill, but today, most patients in the terminal phase of any lethal disease are eligible for palliative care (Van Nees, 1996). The mouth is one of the most frequently distressed parts of the body among patients in palliative care, due in large part to analgesics, antidepressants, and antiemetic medications that precipitate salivary gland hypofunction, candidiasis, and uncomfortable dentures (Table 15.1). 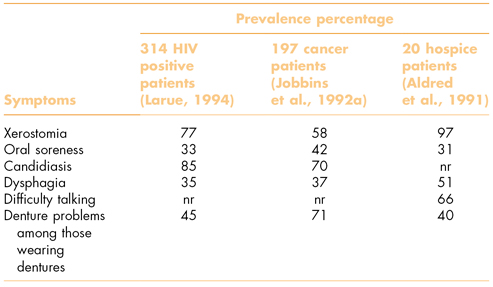 However, dental consultations in palliative care are often requested mostly for toothaches rather than for a dry mouth or uncomfortable dentures (Figure 15.2).

Figure 15.2 Distribution of motives for 275 dental consultations in a palliative care unit. 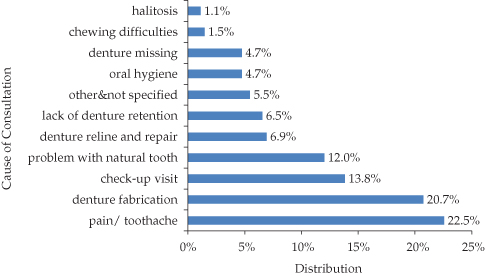 Dental treatment as part of palliative care aims to maintain function and comfort in and around the mouth by oral hygiene and controlling pain and infections as the terminal illness progresses. Dental restorations, prosthodontics, periodontal curettage, and other surgery should be rendered only after considering carefully the patient’s general condition, motivation, life expectancy, and overall propensity for treatment (Mojon and MacEntee, 1994).

Requests to replace or repair dentures are motivated frequently by requests to maintain the dignity of normal appearance and to improve a patient’s chewing ability. The functional, psychological, and psychosocial implications of head and neck disfigurement have significant emotional effects on the patient and the patient’s carers (Dropkin et al., 1983). Consequently, palliative care, when needed, can be very demanding and emotionally stressful for everyone involved. Surgical scars, trismus, xerostomia, opportunistic infections, rampant “radiation” caries, and neglected oral hygiene can cause pain and major loss of function, while loss of appetite, malnourishment, and other manifestations of a general weakness or cachexia can seriously disturb quality of life (Jobbins et al., 1992a). It is worth noting also that patients who are cognitively impaired or unconscious, when compared with patients who are cognitively intact, tend to receive less pain control medications, probably because communication between patient and carers is so difficult (Pautex et al., 2006).

Oral mucositis is among the most common and clinically significant toxicities of drug and radiation therapy for cancer. Depending on the type, dose, and frequency of radiation treatment, the mucositis appears in various ways ranging from localized erythema to diffuse, contiguous, and deep ulcers. However, the mucosa will be injured to some extent in nearly everyone who receives radiation and chemotherapy. About one-third of recipients of conditioning regimens for hematopoietic stem cell transplants, for example, usually develop mucositis, whereas one-fifth of the patients receiving their first course of conventional cycled chemotherapy for solid tumors, such as breast cancer, develop mucosal ulcers. Moreover, if the dose of chemotherapy remains high in subsequent cycles, the prevalence of ulcerative mucositis rises to more than half the patients who had mucositis during the first cycle. While the frequency of ulcerative mucositis is relatively low in patients with solid tumors, the mucosa is nearly always painful.

The pain associated with oral mucositis is often unbearably painful and debilitating (Figure 15.3).

Figure 15.3 Generalized mucositis of the lips in a patient receiving chemotherapy. 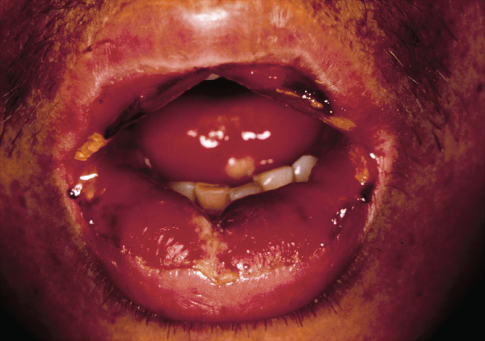 Patients with severe mucositis require opioid analgesics, but even morphine might not adequately control the pain. At times, patients have to interrupt their treatment for the cancer because the mouth pain makes additional treatment intolerable. The clinical ramifications of mucositis are significant when patients cannot swallow solid foods and liquid diets are required, and, worse still, parenteral nutrition or gastrostomy (G-tube) feedings are needed when it is impossible to take food by mouth. Indeed, the pain of mucositis is probably the most severe complication of myeloablative or bone marrow chemotherapy or head and neck radiation therapy. The loss of an intact mucosal barrier in myelosuppressed cancer patients increases the risk of bacteremia and sepsis in large part because the mouth is a potent source of pathogenic bacteria.

Mucositis has an increased impact on resource use and healthcare costs associated with cancer treatment when compared with patients unaffected by mucositis, mostly because they use more narcotics and antibiotics. In addition, if patients need parenteral or enteral feedings, they have higher numbers of unplanned physician and emergency room visits and more hospital admissions, and they spend longer periods in the hospital. The influence on health economics is dramatic with the incremental cost of mucositis among head and neck cancer patients in excess of US$20,000 (Elting et al., 2007).

The most common regimen for radiation therapy used in the treatment of head and neck cancer is a cumulative radiation dose of about 65–70 Gy. Gray (Gy) measures the radiation energy deposited in biological tissues. It is given incrementally in daily doses of around 2 Gy 5 days per week until the planned course is finished. Usually, the radiation is accompanied weekly or every 3 weeks by cisplatin, a platinum-containing chemical compound, to heighten the sensitivity of the tumor cells to the radiation. However, the chemotherapy is avoided in patients who are very frail to avoid additional toxicity.

Oral erythema and, occasionally, superficial necrosis appear usually by the end of the first week of treatment following a cumulative dose of 10 Gy. Patients complain initially that the mouth feels as if it has been burned, and by the end of the third week and a cumulative dose of 30 Gy, erosion and ulceration appear with increasing pain. Ulcers may be covered by a pseudomembrane comprised of dead cells, fibrin, and bacteria (Figure 15.4). 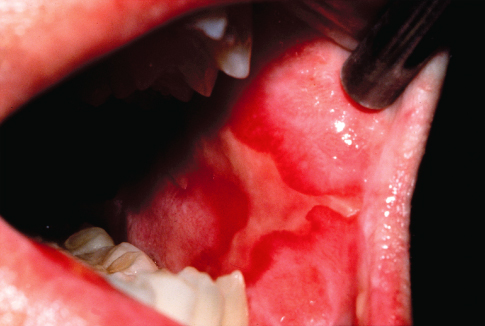 Lesions are limited to the movable mucosa with the buccal mucosa, lateral and ventral tongue, floor of mouth, and soft palate most frequently affected. At this point, patients will begin to select food that is bland and soft. In general, mucositis does not occur on the gingiva, dorsal surface of the tongue, or hard palate. The extent of the mucositis, pain, and difficulty eating increases typically as the radiation continues to the point where it is necessary to stop until the mucosa recovers a little. Mucosal injury persists for 2–3 weeks after radiation is finished, and then healing occurs spontaneously.

Mucositis from chemotherapy is similar in appearance and distribution to radiation-induced mucositis, but it differs in two important ways. First, the course of chemotherapy-induced mucositis is more acute. Symptomatic mucosal changes typically begin 3 or 4 days following drug infusion, peak in another couple of days, persist for 2–3 days, and then gradually resolve. Second, there is usually accompanying evidence of myelosuppression, which is especially significant because neutropenic changes coincide largely with the development of the oral ulcers and increase the risk of secondary infections, bacteremia, and sepsis.

Measuring the severity of mucositis helps in the communication among caregivers, patient management, and clinical research. The WHO criteria and the National Cancer Institute’s Common Terminology Criteria for Adverse Events (NCI-CTCAE v3.0) in the United States are the most widely recognized grading scales for assessing mucositis. The NCI scale uses criteria based on clinician assessment and on patient function, whereas the WHO scale produces a single score by combining the clinical and functional assessments together (Table 15.2).

Table 15.2 Comparison of the scoring scales for mucositis offered by the World health Organization (WHO) and the National Cancer Institute (NCI).

a Ulceration and/or formation of a pseudomembrane.

In general, scores greater than 3 are severe, although the suffering of patients often exceeds the scores derived by clinicians.

Treatment guidelines have been published by the Multinational Association for Supportive Cancer Care (O’Keefe et al., 2007). In general, mucositis is exacerbated by local irritation; therefore, promotion of good oral hygiene is helpful along with removal of sharp edges from teeth and dentures. Consistent use of saline or bicarbonate rinses should be encouraged also. A chlorhexidine mouthrinse might benefit patients receiving chemotherapy, but it is not recommended for radiated patients. Removable dentures should be avoided if possible, and recommendations given for a soft diet of blended foods and commercially available diet supplements.

Cryotherapy, in the form of ice chips, administered before and during chemotherapy might help patients with mucositis, especially those receiving 5-fluorouracil or melphalan. Although there is very little information supporting the use of medications to ease the symptoms of mucositis, topical agents can help to improve or control burning symptoms during early phases of mucositis. Rinsing with a 50/50 mixture of benadryl and kaopectate, or Maalox (not to be swallowed), or viscous xylocaine can be helpful, or Caphosol (EUSA Pharma, Oxford, UK), a lubricant and remineralizing solution might help to diminish symptoms, />