When re-restoring posterior teeth with cast metal or porcelain restorations, the following points should be considered:

If multiple restorations are fabricated, it is reassuring for both the dentist and technician to know that a system for verifying the accuracy of the jaw registration was used when mounting the casts in the articulator. Reproducibility of several registrations is indicative that the casts are accurate, that error, such as cast movement, has not occured in the mounting procedure, that the patient’s condyles did not shift within the fossae and that the occlusal record did not distort before the cast was mounted.

Four useful methods of verification are: the use of a shimstock, the split cast technique, occlusal copings and the Vericheck system.

A shimstock is placed between the teeth in the mouth and the opposing contacts which grip (or do not) the shimstock are noted (Fig 15-1a). The same teeth are subsequently tested on the mounted casts (Appendix). This is far more difficult than it appears, as any small inaccuracies in the casts due to, artifacts on the occlusal surfaces, the movement of mobile teeth during impression taking1 or during registration of contacts by means of shimtock will result in discrepancies between the intraoral and articulator relationships. It is still, however, a useful guide and makes both the technician and dentist very critical of surface inaccuracies of the casts.

Fig. 15-1 Verification of the accuracy of cast mounting. 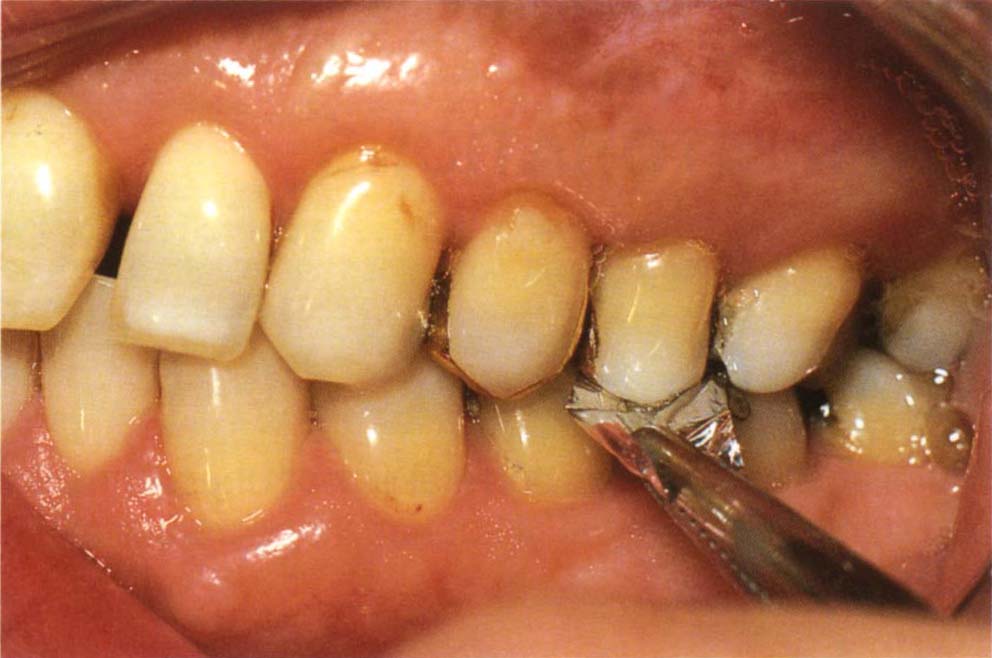 Fig. 15-1a Shimstock between teeth. The same teeth should hold shimstock on the mounted casts.

The base of the upper cast is made in two parts: a primary part with deep V-shaped grooves, and a secondary part which fits into these grooves (Appendix) and is attached to the articulator when the upper cast is mounted with a facebow, see Appendix. 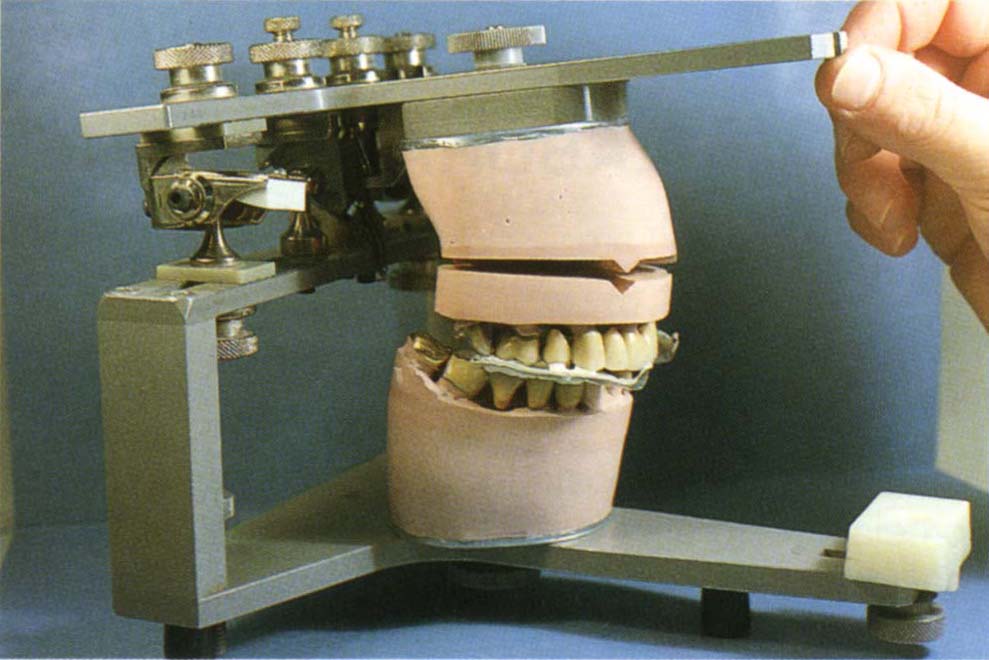 Fig. 15-1b Split cast technique. The upper cast is made with a split base. The casts are mounted with the base intact and then the base is separated. A new record is placed between the cast and the upper member of the articulator lowered onto the upper cast. If the record is identical to the first one, the base will close accurately against its other half.

Three jaw registrations are taken in centric relation position. One of these is fitted between the mounted upper cast and the lower cast, and the latter is attached to the articulator. The registration is then removed and the second registration placed on the occlusal surfaces of the lower cast. The upper cast is then separated from its secondary part and seated in this registration. The upper member of the articulator carrying the secondary part is then closed onto the upper cast. Only if the first and second registrations were identical will the split segments fit accurately. It has been demonstrated that a 0.001 inch discrepancy (25.4 μm) between the thickness of records will result in the failure of the segments to fit.3

If the second registration fails to match the first registration, the third should be tested. Two registrations should correspond before one of them is considered usable. However, it must be emphasised that all that has been demonstrated is that two records have been made of the same jaw position, which is not necessarily the correct one.

It has been demonstrated that for accurate use the split cast system requires a kinematic facebow transfer. An exception is when all jaw registrations are taken at exactly the same vertical dimension, in this case an arbitrary facebow can be used.4

These are particularly applicable when right and left sextants have been prepared for restoration. The working casts are mounted in an articulator and small acrylic copings (such as DuraLay) made on some of the teeth. If the anterior teeth are in contact and clinically non-mobile, a coping is made on the most posterior tooth of each side, otherwise four copings are made: one anterior and one posterior on each side. To avoid damaging the master dies, they should not be used when making the copings, see Appendix. The copings are built up using a bead-on technique to contact the opposing teeth. The contact is checked with a shimstock. The copings are then placed on the preparations in the mouth and are checked for contact with a shimstock. 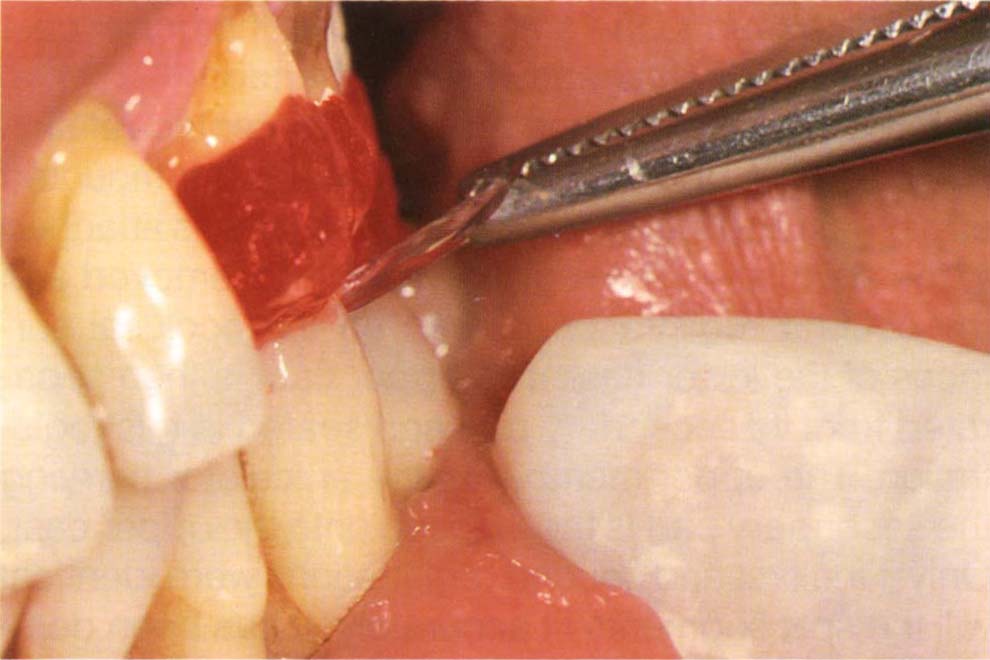 If the shimstock slips easily between the coping and the opposing tooth it indicates a discrepancy between the state on the articulator and that in the mouth.

When using the Denar system multiple registrations can be compared by use of the Vericheck. Casts are transferred from the articulator to the Vericheck. A record is placed between the upper and lower casts and horizontal and vertical styli moved to mark graph paper. A second registration is then placed between the casts and the styli used to make a second set of markings to be compared with the first. The tendency of the styli to rotate and cause altered markings can be overcome by placing a facet on the styli and altering the tubes by means of acrylic resin, for details see Appendix. 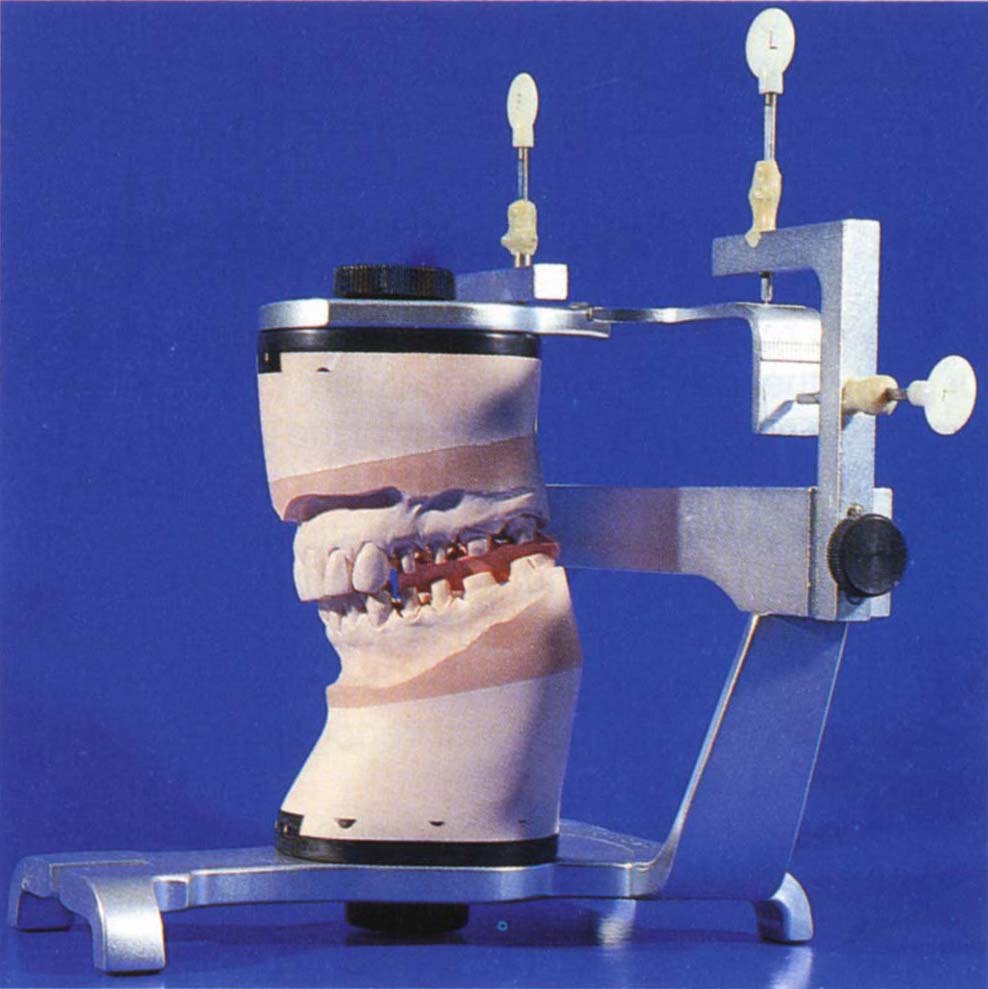 While different views have been propounded on the ideal form of the restored occlusal surface, the consensus appears to be that where possible cusps should fit into opposing fossae in the intercuspal position and, where applicable, to centric relation position.5–6 Frequently, cusps have to be reshaped in order to obtain cusp to fossa relationships, and usually the latter is only possible when restoring several adjacent teeth and the teeth opposing them. If this cannot be achieved readily, cusp to marginal ridge contacts should be provided. This will usually be necessary when individual teeth are restored. 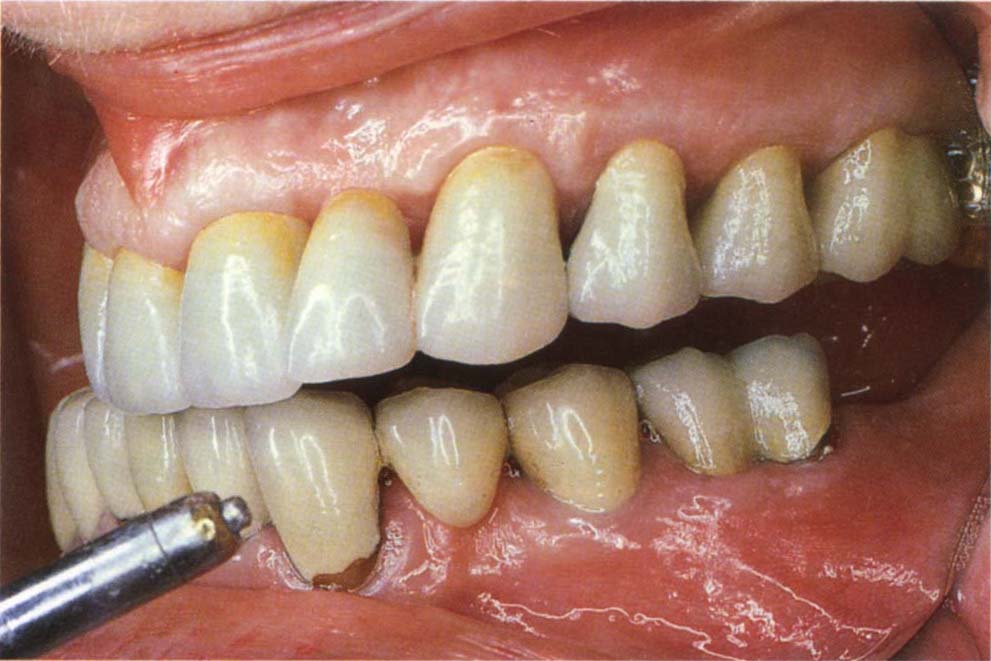 Fig. 15-2 Right lateral excursion. There is absence of non-working side contacts on the left side i.e. posterior disclusion has been provided.

Cusps have been designated as functional or support, and non-functional.7 Support cusps (upper palatal, lower buccal, except for cross-bites) fit into opposing fossae or against marginal ridges and support the vertical dimension in occlusion. Non-functional cusps (upper buccal, lower lingual) form one side of an occlusal fossa and serve to hold food during mastication.

The number of occlusal contacts required for stability with splinted units is less than with unsplinted units. Contacts at the front and back of opposing bridges can maintain occlusal stability, whereas with single units, multiple points of contact on each tooth are needed to prevent subsequent tipping.

Waxing is best carried out by the wax-additive technique. The occlusal form is built up in stages and occlusal contacts checked systematically with a white non-residual powder (EKM Puder, Erkodent). The wax is dusted with the powder and opposing casts oceluded. Contacts appear as black marks in the white powder. The powder burns out in the furnace. Opposing teeth should be waxed simultaneously. This technique is described in Appendix.

The management of specific gold and porcelain restorations will now be considered.

When there are intact teeth on either side of the tooth to be re-restored, the intercuspal position will usually be used (a conformative occlusion). Occlusal adjustment prior to preparation of the teeth would usually be limited to:

1) The opposing cusp. If the opposing cusp has erupted into an occlusally deficient existing restoration, it is necessary to reduce the former before preparing the tooth to prevent it from becoming a non-working side contact later (Chapter 11). It is better to shorten the opposing cusp and raise the fossa of the re-restored tooth to provide good contact in the intercuspal position and freedom in lateral excursion, rather than working to the overerupted tooth and deepening the fossa of the restoration.

2) Initial contact in the centric relation contact position on the tooth to be prepared. For reasons given in Chapter 11, it would be necessary to adjust or remove this contact to avoid any unwanted consequences, unless the patient has a large horizontal : vertical ratio in which removal of the deflective contact will lead to loss of anterior guidance. This is a rare occurrence in the single bounded unit. 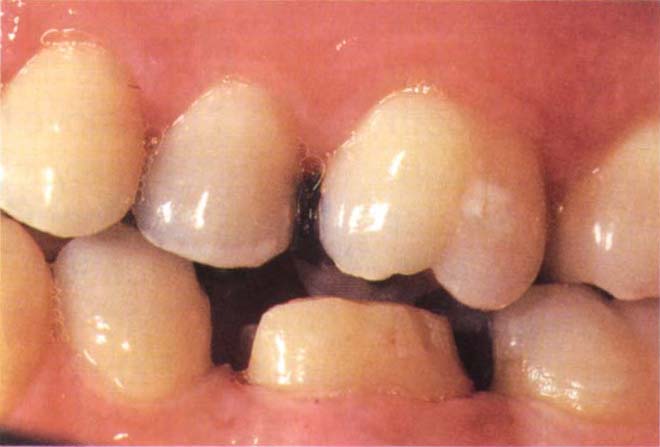 The intercuspal position should be recorded. Frequently, the casts may be manually positioned, with no registration necessary. Occasionally, if the crown to be replaced is occlusally intact an index may be made enabling the crown to be copied, or a temporary crown made, carefully adjusted and copied. If there is any doubt about reproducing accurately from the original form, or if modification of the original form is required an intercuspal record must be made. The record should contact only the prepared tooth and that opposing it and should not encroach on the occlusal surfaces of adjacent teeth (see Chapter 12 – Conformative Techniques).

Hand-held casts. Sometimes single gold or composite resin restorations can be satisfactorily fabricated on hand-held casts. However, difficulties may occur when attempting to refine the cuspal contacts. An occlusal surface of porcelain is difficult to refine during build up, because if the surface is high the powder breaks off, particularly when testing lateral excursions.

Simple hinge articulator. The disadvantages of this instrument have been discussed in Chapter 14.