14 – Principles and Types of Articulators

PRINCIPLES AND TYPES OF ARTICULATORS AND CAST HOLDERS

The main types of articulators will be considered, together with their clinical use. The type of jaw registration used to mount casts on an articulator partly depends upon whether the mounting is for diagnosis or for restoration – records for diagnosis have been described in Chapters 12 and 13.

A dental articulator is defined in the Glossary of Prosthodontic Terms (1987)1 as a ‘mechanical device which represents the temporomandibular joint and jaw members, to which maxillary and mandibular casts may be attached’. 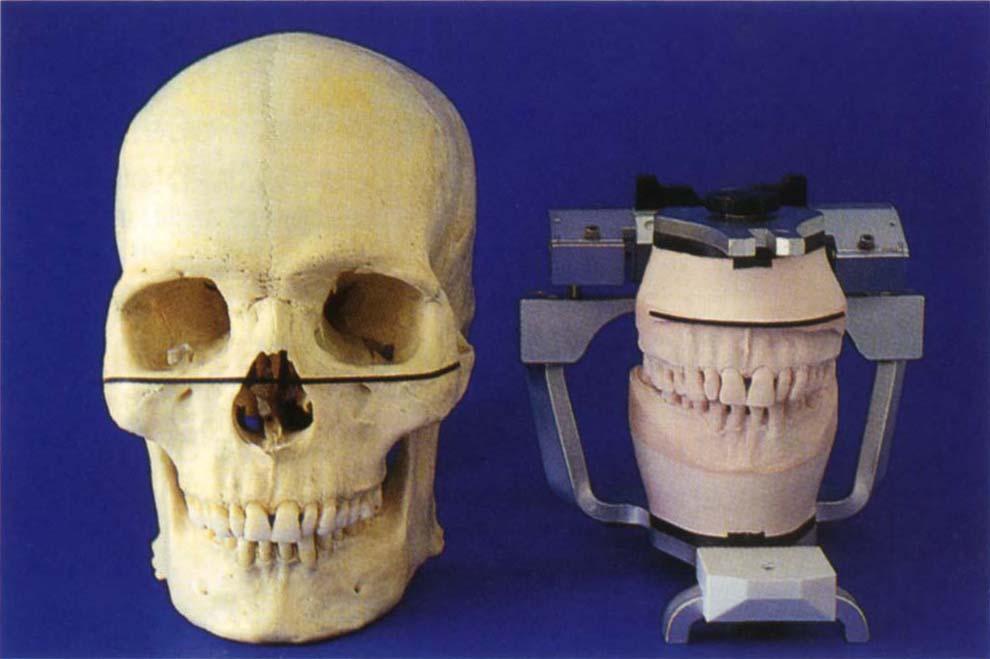 Fig. 14-1 Aesthetic perspective – the casts are mounted with a facebow so that the upper member of the articulator corresponds approximately to a plane passing through the ears and the infra-orbital notch. The alignment of the incisal edges to the horizontal can be observed.

If dental casts are accurately attached to an articulator, it is possible to simulate certain occlusal relationships. The ability to reproduce these relationships accurately with articulators, depends on the adjustability of the latter. This will be discussed subsequently.

Articulators are used for:

They enable the dentist to observe various occlusal relationships. They also enable diagnostic waxing and tooth repositioning to be carried out on casts.

They facilitate the development of both the occlusion and aesthetics.

The articulator allows the dentist and the technician to produce the prescribed occlusal surfaces accurately. The extent to which the instrument is used depends upon the number and complexity of restorations and the experience of both the dentist and the technician. A single restoration constucted on hand-held casts, may take five minutes to ‘grind in in the mouth’. Four restorations, similarly constructed, may require an hour and exhibit none of the occlusal requirements for restoration. With sixteen restorations, it may not be possible to make satisfactory adjustments in the mouth.

Until the dentist is able to produce smooth tooth preparations, good impressions, good tissue management and accurate jaw registrations, and the technician is able to produce well-contoured, accurately fitting castings on well-prepared dies and casts, having mounted such casts accurately (Appendix), the use of sophisticated articulators and the treatment of complex cases should not be undertaken. The dentist and technician should work together, using simple devices and gradually progress to more complex procedures as they develop an understanding of the various instruments.

By relating working casts precisely to the horizontal plane (assuming the patient is sitting upright: Fig 14-1), the technician has a better perspective which will prevent the production of restorations with incorrect occlusal planes.

The main reasons for mounting study casts for diagnostic purposes are to investigate further:

In the first two cases it is essential to make jaw registrations on the terminal arc of movement prior to tooth contact, that is a tooth apartjaw registration. This eliminates the proprioceptive effect of interocclusal contacts. Observation of lateral and protrusive contacts requires lateral registrations. Techniques for diagnostic registrations are described in Chapter 4.

It is now possible to consider the requirements of articulators when they are used for diagnosis and for restorations. 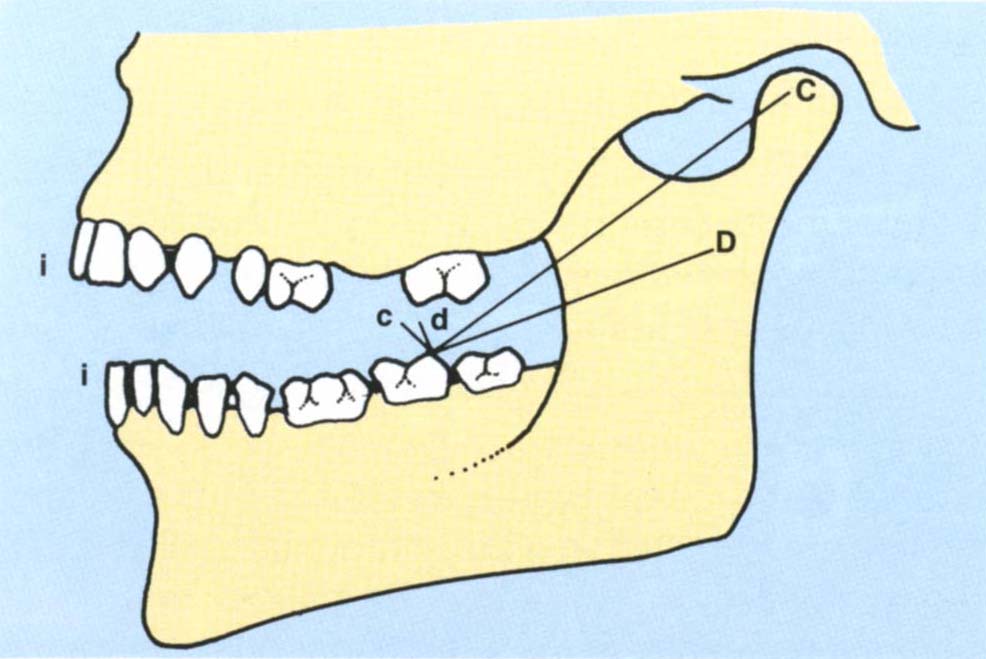 Fig. 14-2a The effect of ‘closing through’ a registration, i – i = thickness of a registration in the incisal region. Note the position of the distal cusp of the overerupted 37. When the horizontal axis of rotation of the articulator corresponds to the patient’s axis (C), removal of the record results in closure along path c and 37 does not contact 28. When the axes do not coincide (D), closure is along path d, 37 distal cusp contacts 28.

For most cases, great accuracy is not required. However, the instrument should be able to simulate major non-working, working and posterior protrusive interferences.

• Stability of the Mounted Position

The articulator must be able to hold the casts accurately in the mounted position when the jaw registration material is removed. Following movement of the articulator, the casts must return precisely to the original position.

If this differs from the mounted position the articulator should allow the casts to be related in the intercuspal position.

The technique employed and the number of teeth to be restored will determine how accurately lateral excursions must be reproduced. This will be discussed subsequently.

If the upper member of the articulator represents the axis orbital plane, the technician can use this when fabricating anterior restorations to assist in orientation of the crowns to the horizontal plane, as this is usually almost the same as the axis-orbital plane.

Types of Articulators and Cast Holders

Several types of commonly used articulator will now be considered, with the foregoing considerations in mind. Many of the devices commonly called articulators are in fact nothing more than cast holders, and do not simulate mandibular movement.

The advantages and disadvantages of the hand-held casts are that:

For the failed, extensively restored dentition, hand-held casts are only useful for observing the intercuspal position. Even this assumes that they can be accurately related in this position. 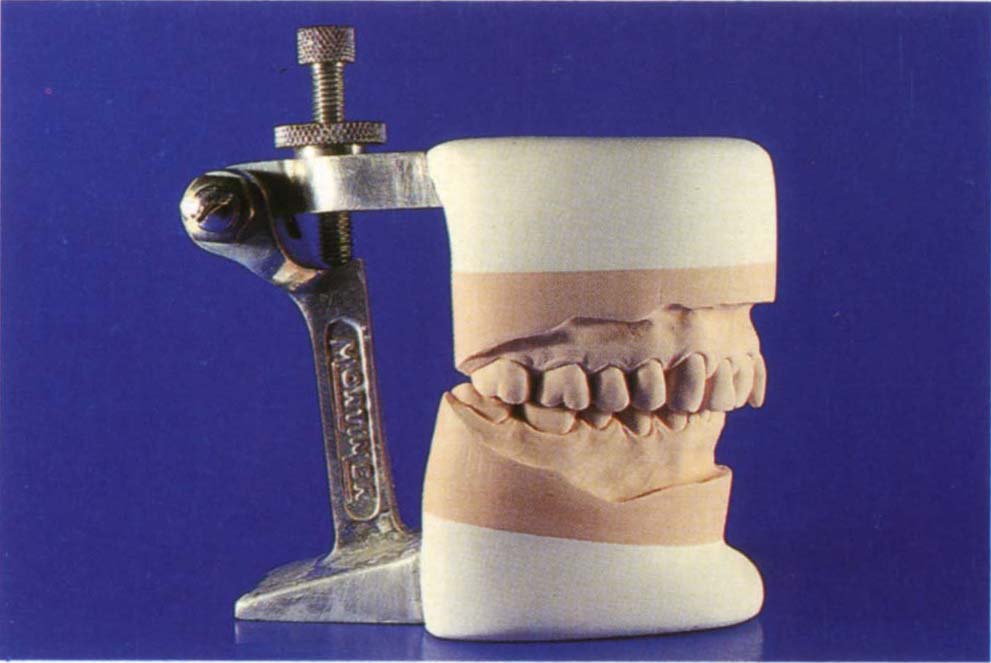 Fig. 14-2b Simple cast holder. This acts as hinge. The axis of rotation is close to the teeth and does not replicate the true distances between the horizontal axes of rotation and the dentition.

It has no diagnostic value, other than for observing intercuspal relationships. It may be used occasionally for single crowns, provided lateral excursions are adjusted in the mouth, or it is complemented by the functionally generated path technique. It may be of use in the fabrication of temporary crowns. Since very little extra time is required to use a semi-adjustable articulator, the device is of little value in the management of the failed extensively restored dentition.

There are two types of semi-adjustable articulators: 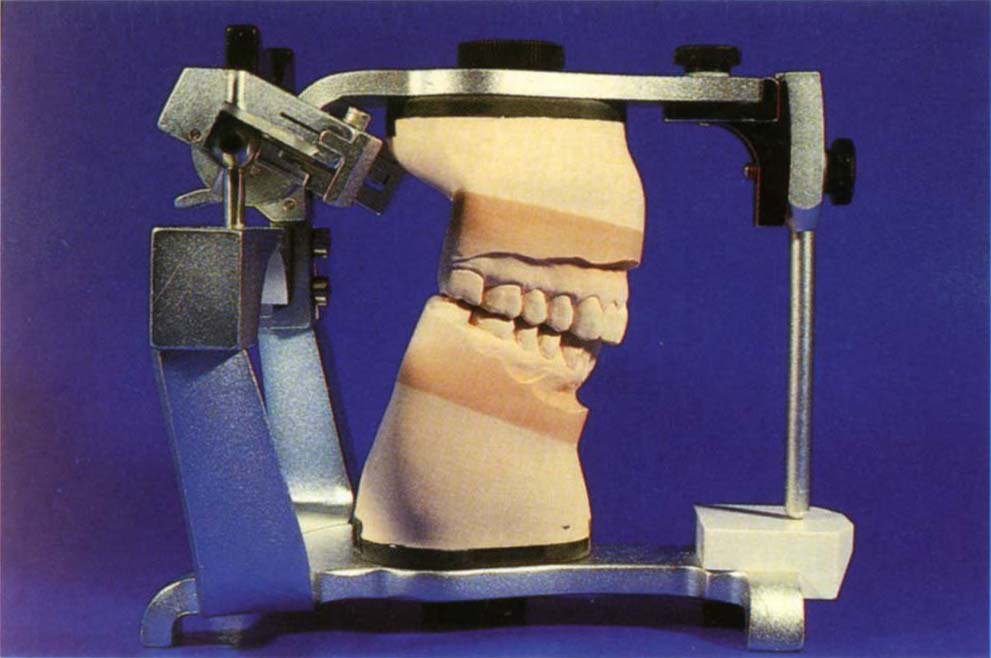 Fig. 14-2c Arcon articulator (Denar Mark 2). The fossae are on the upper member, the condyles on the lower. The condyles are not rigidly held in the fossae and, therefore, can move away from the fossae if required by occlusal contacts. The lower cast has been mounted to the upper cast via a jaw registration. The upper cast has been mounted via a facebow transfer, see Figures 14-3a and b. 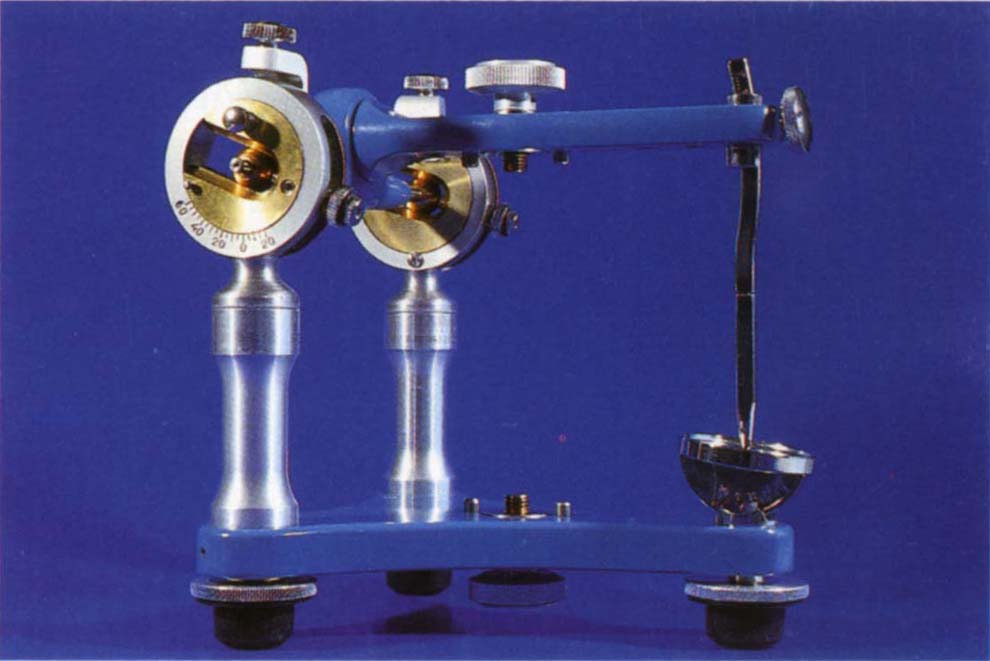 Fig. 14-2d Non-arcon articulator (Dentatus). The condyles are represented by slots on the upper member, the fossae by balls on the lower member. The ball is fixed into the slot and, therefore,cannot move away and may, therefore, not be able to reproduce the CRCP/IP movement which is tooth determined.

Arcon articulators usually have a removable upper member and are good teaching instruments since the position of the fossae correspond to that in the patient. If casts are mounted in a non-Arcon articulator with a centric relation record, it may be difficult to position them subsequently in the intercuspal position, as the condyles are restricted by the fossae slots which may not permit the correct condylar movement to occur between CRCP and the IP.

With both types of semi-adjustable articulator, final closure after removal of the jaw registration is simple and accurate enough for diagnosis provided a facebow is used. There are two types of facebow: average and kinematic. With either type of facebow the relationship of the mounted upper cast to the articulator joints corresponds to the relationship between the upper teeth a/>

Tags: Failure In the Restored Dentition Management and Treatment
Jan 17, 2015 | Posted by mrzezo in Prosthodontics | Comments Off on 14 – Principles and Types of Articulators
Premium Wordpress Themes by UFO Themes
WordPress theme by UFO themes