Occlusal adjustment is the alteration of the occlusal surfaces of teeth by the dentist to change the relationship of occlusal contacts. Although often used synonymously, it should be differentiated from occlusal equilibration, which is the planned alteration of occlusal surfaces to provide stable jaw relationships with stable simultaneous multiple interocclusal contacts and smooth excursive movements, unimpeded by occlusal interferences.

Equilibration is usually carried out in two stages, the first being the alteration of occlusal contacts, and the second the provision of stability. Occlusal adjustment is often easy (to alter the occlusion), but it is difficult to provide the stable interocclusal and jaw to jaw relationships subsequently.

Localized occlusal adjustment is often necessary for re-restoration in a conformative manner (Chapter 12). Adjustment can range from modification of a single tooth to modification of all the teeth. When the entire dentition is adjusted, the ultimate aim is occlusal equilibration. Occlusal equilibration is often required as a prelude to re-restoration in a reorganized approach (Chapter 13).

Restorative indications for occlusal adjustment and equilibration will be considered in detail in the sections on the conformative and reorganized approaches to restorations, Chapters 12 and 13.

In its simplest form, occlusal adjustment consists, of altering the occlusal surfaces of teeth in the intercuspal position (IP).

Fig. 11-1b The palatal cusp of 27 and the buccal cusp of 37 form a non-working side contact in right lateral excursion leading to the fracture of the 37 buccal wall.

Fig. 11-1c Prior to restoration of 37 the palatal cusp of 27 should be reshaped by shortening the cusp.

Fig. 11 -1d The fossa of the restoration is built up so as to contact the opposing cusp in the IP.

Fig. 11-1e In right lateral excursion the anterior guidance separates the now shorter palatal cusp of 27 from 37 yet a stabilizing contact remains in the IP.

The presence of a plunger cusp requires occlusal adjustment in order to prevent food packing. Wherever possible, the cusp should be reshaped to provide contact with an opposing fossa, thereby reducing the chances of food packing.

It is possible to adjust the cuspal inclines in the CRCP so that when the masticatory muscles contract there is neither an anterior component of force directing the mandible forwards into the intercuspal position, nor a lateral component directing it sideways (Figs 11-2a–c).

Reduction of the distal incline of a mandibular cusp moves the cusp tip mesially. And conversely, if the mesial incline is reduced, the cusp tip moves distally (Fig 11-2f). As the vertical dimension is reduced in the CRCP, the mandibular cusp tips will move mesially due to arcing around the horizontal axis of rotation. If the distal cuspal incline is reduced, the cusp tip will move even further mesially. If the mesial incline is reshaped, the mesial movement of the cusp tip due to reduction of vertical dimension can be lessened or eliminated and even sometimes reversed. By employing these concepts, it is often possible to shape cusps, not only to remove deflective contacts, but also to determine the ultimate cusp to opposing tooth relationship.

It must be emphasized that for this CRCP-IP discrepancy there is little difference between the two positions at the end of occlusal equilibration.5–8

In the presence of a small vertical component to the CRCP-IP discrepancy, there will be very little arcing effect when deflective contacts are removed. Furthermore, following adjustments in the CRCP, the mandible will frequently reposition itself distally to the original intercuspal position. This results in a large horizontal table between the CRCP and the original IP, that is, ‘an area of freedom in centric’ (Fig 11-2g), with the result that previously contacting anterior teeth may no longer contact, thereby removing anterior guidance and creating rubbing contacts on posterior teeth with associated squeaking sounds. Accommodation to such an ‘area of freedom’ may be difficult, particularly if it is greater than 1 mm and the patient is anxious, occlusally aware and feels stressed. The results of occlusal adjustment for a patient with a large horizontal : vertical ratio are unpredictable and adjustment should only be prescribed with extreme caution. 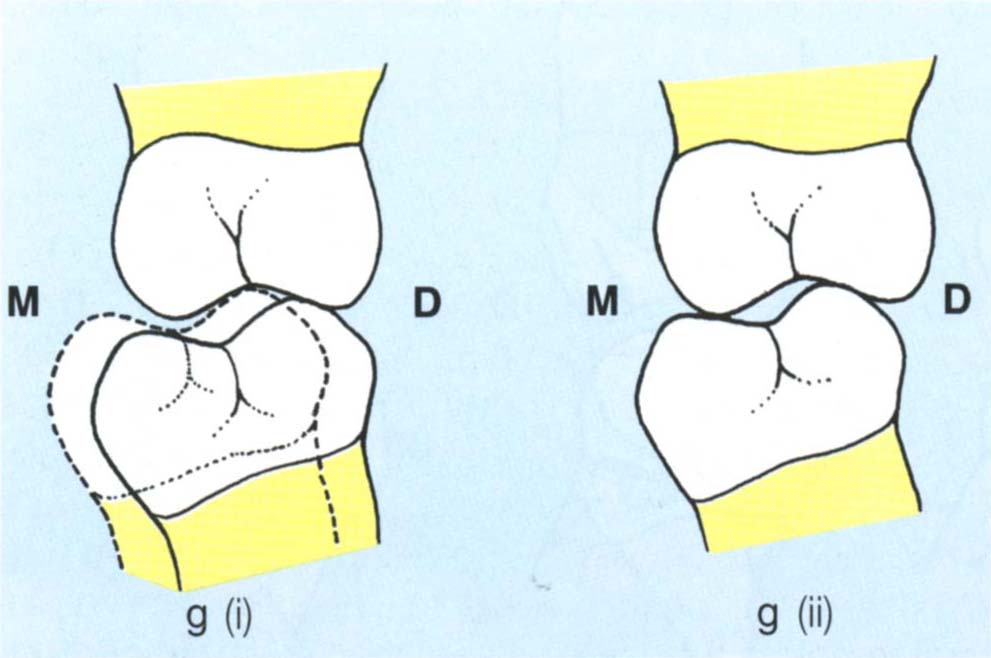 Fig. 11-2g Sagittal plane diagram (M = mesial, D = distal); (i) Large horizontal with small vertical ratio between CRCP (solid) and IP (broken); (ii) Removal of the deflective contact with little change of vertical dimension in the CRCP. There is little arcing of the mandible so that the adjusted CRCP is distal to the original IP.

Some patients do not fit readily into the previous categories. However, in the absence of a well defined large vertical : horizontal ratio, it should be assumed that following occlusal adjustment ‘an area of freedom’ will remain, often measuring less than 1 mm. The principles described by Dawson (1974)6 and the technique of Ramfjord and Ash (1983)8 are recommended for the large horizontal and intermediate ratio patients.

Tags: Failure In the Restored Dentition Management and Treatment
Jan 17, 2015 | Posted by mrzezo in Prosthodontics | Comments Off on 11 – Occlusal Adjustment and Equilibration
Premium Wordpress Themes by UFO Themes
WordPress theme by UFO themes