Fig. 7.1
Photograph of teeth of a participant with development enamel defects who said: “I always wanted to change my teeth, they are like multi-coloured… I’m loads bothered” (girl, aged 14)
A similar study in Brazil also investigated the impact of fluorosis using a modified version of OIDP, this time with 513 schoolchildren aged 6–15 years [15]. No differences in impact on daily activities (eating, speech, oral hygiene, sleep, smiling, emotional stability, studying, and socializing) were found between those normatively assessed as having fluorosis or not. Robinson and coworkers [30] issued the CPQ11–14 to a sample of 174 12-year-old Ugandan children, 24 % of whom had dental fluorosis. They reported that more participants with socially noticeable fluorosis (TFI>2) had impacts on their OHRQoL than those with mild or no fluorosis, although the difference was not significant.
Studies in developed countries, where any fluorosis is likely to be less severe, have suggested that there is no impact on OHRQoL [1, 31]. Indeed, a study of 8- to 13-year-old Australian children found that those with a TFI of 2 had better OHRQoL than their peers with normal enamel [1]. However, it was not clear whether this could be attributed to the “whiteness” of affected teeth or reduced caries incidence.

Although there have been comparatively few studies on the psychosocial aspects of AI [32], it is evident that this condition has far greater impact than dental fluorosis. This is not surprising in view of the often severe functional problems, relating to dental hypersensitivity and tooth tissue loss, which may accompany compromised aesthetics. The first, and landmark, study of the psychosocial impacts of AI was conducted with a mainly adult population, although a few adolescent participants were included [19]. Interestingly, social avoidance and distress were found to be greatest among younger patients. More recently, a mixed method study involving children from a UK dental hospital has made a significant contribution to our understanding of how AI affects younger people [16]. In-depth interviews were conducted with seven children, aged 13–16 years. A further 40 AI patients, aged 10–16 years, completed the CPQ11–14 as well as some additional questions generated from the previous interviews. Participants reported impacts relating to aesthetics as well as function. Children did not like to show their teeth, especially for photographs and in social settings.

When all my friends are talking I’d want to join in but don’t want to show my teeth (girl, aged 16)

For some children, tooth sensitivity was actually more of an issue than aesthetics.

If there was no problem with sensitivity, I’d drink faster and bite down on ice lollies and not cringe when I think of it (girl, aged 13)

The only study to utilize in-depth interviews to explore the impact of DDE was conducted in the UK with populations receiving either a non-fluoridated or fluoridated (1 ppm) water supply [23]. A theoretical framework, based on symbolic interactionism was used to guide and interpret the qualitative data. Twenty-one 10- to 15-year-old young people were interviewed, with TFI scores ranging from 0 to 5. The impact of DDE was frequently described in terms of how much dental appearance “bothered” the individual. Photographs of the teeth of two participants have been included to illustrate the clinical severity of the DDE.

I don’t like the colour, I’m conscious about it, when I am talking I don’t like showing them…. I’m actually quite bothered (boy, aged 15)

I always wanted to change my teeth, they are like multi-coloured… I’m loads bothered (girl, aged 14) (Fig. 7.1)

I’ve got some marks on the side of these two teeth, but they don’t bother me (girl, aged 13)

Interestingly, DDE impacted most on individuals whose sense of self was defined by appearance and who depended on perceived approval from others about appearance. No association was found between gender, age, severity of DDE, and the reported impacts. However, this research was the first to identify that a sense of self may explain variation in the impact of DDE on young people. The following selected quotes illustrate how DDE were found to impact variably on the participants, in terms of how they felt about their own dental appearance. 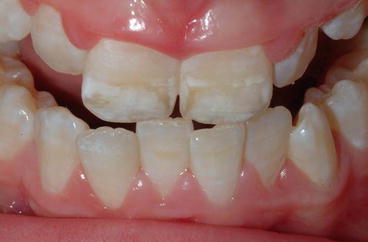 Fig. 7.2
Photograph of teeth of a participant with developmental enamel defects who said: “I’m happy with the way I am, it doesn’t really matter what you look like, its personality” (girl, aged 12)

Another important finding was the degree to which children were teased or questioned about the marks on their teeth, particularly when new people were encountered. Again, there was considerable variation in how teasing and name-calling impacted on young people, which may have related to how much importance the individual placed on their appearance as a whole.

I don’t’ like the thing on my tooth and I don’t like my big ears. Whenever I get into an argument with someone that’s the first thing they go on about (boy, aged 11)

When people are being nasty they always say things about my teeth, I don’t really care (girl, aged 12)

Whenever I go on holiday or when I meet some new friends I don’t know they say “I don’t mean to be bad, but I think you’ve got something on your teeth there”… They thought I wasn’t brushing them and stuff… (boy, aged 11)

Teasing, name-calling, and bullying are a common occurrence in childhood and adolescence. Lovegrove and Rumsey [26] found that over half of their sample of 654 British 11- to 14-year-olds had encountered appearance-related teasing or bullying. In a study of children with AI, 50 % reported being teased about their teeth [16]. This figure concurs with findings from an earlier study of children with a range of DDE, where 56 % stated that they had been subject to unkind remarks about their teeth [22]. Although Marshman and colleagues [23] found variation in how teasing and name-calling impacted on young people, for some young people, being subject to teasing may be the motivation for seeking cosmetic treatment, and the clinician needs to be sensitive to such issues. However, young patients may be self-conscious and not always forthcoming about this matter, especially when meeting a dentist they do not know well. An empathetic approach is clearly needed, and the dentist should be able to direct patients to available support services, such as online anti-bullying resources (www.​kidscape.​org.​uk).

The Impacts of Treatment for Enamel Defects

The management of DDE encompasses a wide range of treatment regimens, which broadly aim to preserve tooth structure, prevent dental caries, reduce symptoms such as thermal hypersensitivity, and improve dental appearance. Some children face a lifetime of dental interventions in order to maintain their compromised dentition, and this may present considerable demands in terms of treatment compliance and costs for affected individuals and their families. Jälevik and Klingberg [33] highlighted the impacts of repeated treatment episodes for 9-year-old Swedish children with molar incisor hypomineralization (MIH). They found that children with MIH were more dentally anxious and were more likely to exhibit clinical behavior management problems than children in a control group. Interestingly, their longitudinal findings for the same group of children, 9 years later, revealed that although patients with MIH had poorer oral health (a significantly higher DMFT), they were no longer more dentally anxious then their non-MIH controls [34]. Clinical impressions suggest that children with AI may also be more dentally anxious than their peers [35], but this has yet to be evidenced by research findings. It is hypothesized that because these children frequently experience and anticipate oral pain from normally innocuous thermal, mechanical, and osmochemical stimuli, they understandably become more dentally anxious.

Patient-reported outcome measures are becoming more recognized within pediatric healthcare [36] but have yet to be well developed within dentistry. A recent Cochrane systematic review sought to compare clinical-reported and patient-reported outcomes (satisfaction with esthetics and sensitivity) following restorative care of children with AI [37]. Unfortunately, no studies met the inclusion criteria, but it was encouraging to see that the authors had recognized the need to seek children’s views on what treatment outcomes were important to them.
To date, only one study appears to have considered the impact of treatment on young people with DDE [22]. This service evaluation sought the views of 67 young people, aged 7–16 years, who had received microabrasion and/or composite restorations on their upper incisors for a variety of visible enamel defects. Participants completed a simple 10-item questionnaire which was developed with service users. There was also a free text box for patients to write further comments. Prior to any intervention, children reported high levels of worry and embarrassment. However, following treatment, children said they felt happier and were more confident.

I cannot fault my treatment which has made me gain some confidence, which has helped me in this difficult year of exams (girl, aged 16)

Interestingly, the study also revealed unmet treatment expectations as some young people reported disappointment that their teeth “weren’t perfect” after interventions. This finding clearly highlights the need for clinicians to communicate effectively and manage patient expectations more realistically at the outset of treatment. The media and celebrity culture may be influencing children to desire an unnaturally white and uniform dentition, which presents clinicians with ethical, financial, and clinical concerns.

I was looking forward for seeing my teeth completely white but they were not completely white. It looked better than it was but they should have said that it wasn’t going to do all my teeth white (boy, aged 14)

It is encouraging to see that a more recent study, conducted with children with AI, did seek young patients’ expectations at the outset of treatment [16]. The authors asked 40 children what was the single most important thing they wanted from their course of treatment? The majority (63 %) stated that they hoped for an improvement in the color of their teeth, and 18 % said they wanted a better smile. For 10 %, a reduction in tooth sensitivity was the most important outcome.

Another consideration is how the timing of any dental treatment, particularly for largely esthetic interventions, impacts on the individual. Clinical anecdote suggests that some children, who have been previously unconcerned about their dental appearance, are prompted to request treatment because of a significant social event (e.g., being a bridesmaid at a wedding) or change in their circumstances.
One study explored the experiences of 11- to 12-year-old children with a variety of visible facial and dental differences, including DDE, during their transition to secondary (high) school [17, 20, 22]. A 2-week diary was developed with children and incorporated both open and closed questions with space to include drawings. Children also completed the CPQ11–14. Participants discussed a variety of aspects about the transition to secondary school including concerns about their appearance in their new social environment.

I had like brown marks on the front two teeth, I didn’t know what they were going to say about them…. it was a worry before I went to big school. (girl, aged 11)

Some children discussed their oral conditions such as cleft lip and how they dealt with questions from peers about it, while others reported having sought treatment to improve the appearance of enamel defects prior to starting secondary school (Fig. 7.3).

Fig. 7.3
Only gold members can continue reading. Log In or Register to continue