Syndromes and Diseases Associated with Developmental Defects of Enamel

Fig. 4.1
Classification of the etiology of enamel defects in relation to systemic diseases or genetic syndromes
(i)
Those presenting with systemic disease as a pathological but non-genetic effect on ameloblasts
(ii)
Those presenting with a genetic disease and with a similar pathological but non-genetic effect on the ameloblasts
(iii)
Those specific genetic diseases in which the affected gene is known to be directly involved in amelogenesis
It is important to distinguish between the terms hypoplasia and hypomineralization in the diagnosis of enamel defects. Hypoplasia is a defect in the quantity of the enamel. It results from a disorder of amelogenesis during the appositional or initial secretory stage of enamel formation. It may appear as thinner enamel, pits, or grooves. Adjacent enamel may also be hypomineralized. Hypomineralization relates to a deficiency in the quality of the enamel, presenting primarily as an opacity (or porosity) in the enamel. This may be present superficially or through the full thickness of the enamel. Most hypomineralization defects occur during the later maturation phases of tooth development.

Systemic Disease with a Non-genetic Effect on Ameloblasts

It is not uncommon for infants to be born as early as 25 weeks gestation and not only to survive, but develop with relatively few physical or intellectual consequences. However the stigmata of the preterm infant can manifest even in children born up to 36 weeks, related to conditions including perinatal respiratory distress, intracranial bleeds, pulmonary immaturity, persistent ductus arteriosus and ventricular septal foramina, necrotizing enterocolitis and some debilitating infections. Long-term ventilation via oral or nasal intubation, hyperbilirubinemia leading to jaundice and suboptimal nutrition all contribute to the comorbidity. Neonatal hypocalcemia presents in all newborn infants up to 48 h until the development of normal calcitonin and parathyroid hormone levels. However this hypocalcemia is often more severe in preterm neonates resulting in altered calcification of the enamel matrix.
The timing of development of the primary and permanent dentitions means that amelogenesis in the primary dentition is particularly vulnerable to disturbances as a consequence of prematurity. Thus, in the primary dentition, there is a direct association between low birth weight (<1,500 g) and both enamel opacities and hypoplasia [1].
Although the actual process of mineralization of permanent dentition enamel does not commence until around the time of a full-term birth, some studies have reported an increased risk of enamel defects in the first permanent molars [2–4]. However, the strength of the evidence to support a causal relationship between preterm birth and DDE in the permanent dentition remains limited at this time [1].

Renal function is essential in homeostatic regulation of the calcium and phosphate salts needed for the formation of all mineralized tissues. Although odontogenesis is notably different from osteogenesis its processes are equally susceptible to dysregulation of mineralization resulting from renal failure. Hypoplastic horizontal enamel defects are characteristic of acute renal disease in early childhood. The position of the defects on the crowns of the permanent teeth is often strikingly coincident with the age of the child at the onset of disease. Normal full-thickness enamel formation will be seen following remission or resolution of the acute phase.

Nephrotic syndrome is a non-specific kidney disorder associated with damage to the glomeruli which alters their capacity to filter substances transported in the blood. Despite the term “syndrome” this is a heterogeneous range of conditions whose genetic basis is currently not fully understood. It has been reported to cause hypomineralization defects [5] though the mechanism is somewhat unclear. A failure of the highly selective filtration in the glomerulus leads to heavy loss of albumin, lipids and other proteins. Widespread edema is the initial feature but loss of macromolecules and binding proteins leads to significant morbidity and even mortality. The primary cause of this edema is failure of water and salt excretion and it must be presumed that this also disrupts calcium and phosphate homeostasis, resulting in defects in tissues which are undergoing mineralization.

Enamel defects occur with varying severity in patients with celiac disease, an immune-mediated disorder in which damage to the mucosa of the small intestine occurs causing malabsorption when susceptible individuals ingest proline- and glutamine-rich proteins (“gluten”) in wheat, rye, and barley [6]. The risk of enamel defects has been reported to be higher with the presence of HLA-DR52–53 and DQ7, human leukocyte antigens [7]. The prevalence has been reported in the primary dentition as between 5.8 and 13.3 % and in the permanent dentition between 9.5 and 95 % with incisors being the most commonly affected teeth [8–11]. This is not unexpected as the crowns of the incisors form in the first year of life when gluten is first introduced into the diet. The severity of the defects is related to the length of time of gluten exposure before the condition is diagnosed. Once gluten is removed from the diet, symptoms will disappear but enamel defects will remain. The classification of enamel defects in celiac disease is usually that reported by Aine in 1986; Grade 0 exhibits no defects; Grade I exhibits a color defect with cream, yellow, or brown opacities; Grade II exhibits rough enamel surface with shallow horizontal grooves or pits and may include opacities and discoloration; Grade III exhibits structural defects, a rough surface, deep horizontal grooves, vertical pits and large discolored opacities; and Grade IV exhibits severe structural defects with pointed cusp tips and/or thinned uneven incisal edges. Usually defects can be detected in a pattern across all four quadrants. Figure 4.2 shows a typical pattern of Grade I enamel defects in a 14-year-old female diagnosed with celiac disease at 9 years of age. 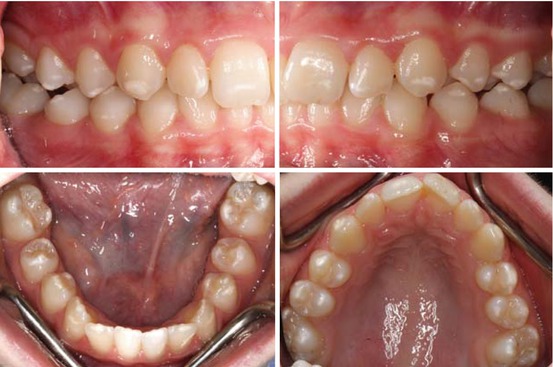 Fig. 4.2
Grade I enamel defects in a 14-year-old girl diagnosed with celiac disease at the age of 9 years (Courtesy of Dr AK Natarajan, New Zealand)
There are two possible mechanisms underpinning the DDE lesions seen in celiac disease; one relates to malabsorption leading to hypocalcemia, while the other suggests that there may be an immune response to the ameloblasts [12]. Irrespective of the mechanism, the pattern of the DDE should always be recorded carefully by clinicians in all patients who have a diagnosis of celiac disease. Conversely when a pattern of specific enamel defects occurs and no other cause can be determined, clinicians should consider celiac disease in the differential diagnosis. Questions in the history should include occurrence of recurrent aphthous ulceration, abdominal pain, diarrhea, poor weight gain, fatigue, anemia or a family history of celiac disease. A referral should be made to a pediatrician or gastroenterologist for testing with a description of the oral signs that have been detected.

The enamel organ is very sensitive to the toxic effects of chemotherapeutic agents and radiation therapy. The effects of radiation may be attributable to both deterministic effects (non-stochastic, dose dependent) and stochastic effects (random, no minimum dose). Agenesis, microdontia, and ridges of hypoplasia may be seen, almost always with concomitant disturbances of dentin development and root malformations in particular (Fig. 4.3a, b). 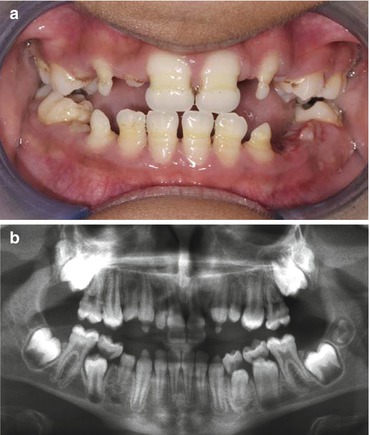 Fig. 4.3
(a) Shows the clinical image and (b) radiograph of a 10-year-old treated with chemotherapy and radiotherapy for a hepatoblastoma age 2 years
The leukemias are the most common group of childhood malignancies; thus the effects of therapy on amelogenesis tend to be generalized. Therapy for solid tumors such as brain and ocular lesions is often more targeted and more likely to affect one side or even one quadrant. The severity of the defects will be determined primarily by the age of the child when therapy is commenced and then by the type, intensity and duration of therapy [13].

Genetic Systemic Disease with an Indirect Effect on Amelogenesis

The processes of odontogenesis, including amelogenesis, are dependent on complex temporal and spatial interaction between genes and gene products, the contemporary understanding of which is less than comprehensive. While this section summarizes some monogenic diseases where the causative gene is currently not thought to be involved in amelogenesis, there may be a future time when a direct cause-and-effect model is identified.

The term “rickets” has been traditionally used to describe the skeletal disease associated with deficiency in vitamin D, be that a dietary deficiency or one resulting from insufficient exposure to sunlight. However more recently the term has been expanded to include inherited metabolic bone diseases causing defects in mineral metabolism. Advances in understanding the molecular basis of disorders of hard tissue formation and regulation have led to discovery of specific genes and their protein products which, when mutated, lead to specific bone diseases. As is often the case, where skeletal bone metabolism is defective, odontogenesis is affected in some way [14].

Deficiency of vitamin D and calcium was a very common cause of rickets in the past. However it almost disappeared in the Western world during the early twentieth century thanks to the fortification of foods with vitamin D. More recently there has been a resurgence in the prevalence of VDDR which has been linked to inadequate exposure to sunlight. The factors behind this remain putative but include heightened awareness of the risk of skin cancer, cultural clothing practices leading to women being fully covered and dark-skinned people living in northern (cloudy) climates with little daily sunlight.
Enamel and dentin defects have long been reported in VDDR, with hypoplastic (often discolored) enamel, large pulp chambers, short roots and interglobular dentin spaces [15]. These defects are closely linked to circulating levels of the active metabolic form of vitamin D, namely 1,25-dihydroxyvitamin D3. Direct effects on the enamel organ and odontoblasts can cause defects in both matrix secretion and mineralization resulting in hypoplastic enamel which may also be hypomineralized (Fig. 4.4). Importantly early diagnosis of VDDR and appropriate dietary supplementation can improve both skeletal and dental mineralization. 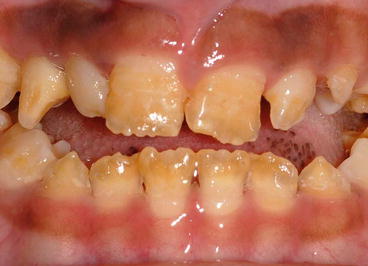 While rare, XLHR is the most common cause of familial rickets with an incidence of 1:20,000 births [16]. The disease is related to an isolated phosphate transport defect caused by mutations in the PHEX gene that results in increased inhibition of both skeletal and dental mineralization. This X-linked dominantly inherited condition is characterized clinically by hypophosphatemia (reduced phosphate level in the blood), growth retardation, rickets and well-recognized dental manifestations. Initial descriptions of XLHR emphasized the poor clinical response to vitamin D rather than the distinctive finding of marked hypophosphatemia, hence the historical use of the term “vitamin D-resistant rickets.”
As with some other familial forms of rickets, XLHR is associated with spontaneous dental abscesses which are probably associated with the thin, hypomineralized dentin and large pulp chambers. The enamel in these conditions often appears macroscopically normal though enamel hypoplasia, cracks and defects have been reported [17]. The mechanism behind these enamel defects, which are reported to occur in up to 28 % of XLHR affected individuals [18], is currently unclear; however they may well contribute to the apparently spontaneous nature of these abscesses (Fig. 4.5a, b). The dental manifestations can be particularly miserable for the affected individuals and are also difficult to manage clinically [19]. Early clinical and molecular diagnosis of these familial disorders may lead to timely correction of the metabolic defect. While medical management, aimed at controlling serum calcium and phosphate, undoubtedly has a positive effect on skeletal development, there is also evidence that the associated dental defects may be partially or totally rescued [20]. 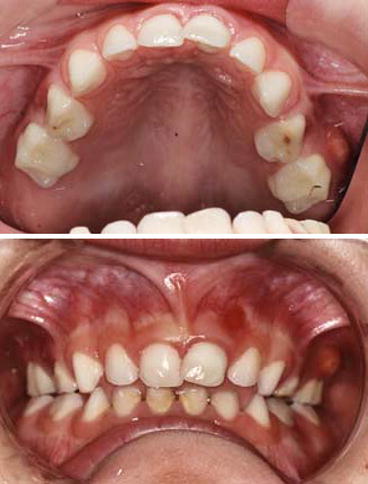 Tags: Planning and Care for Children and Adolescents with Dental Enamel Defects
Oct 30, 2015 | Posted by mrzezo in General Dentistry | Comments Off on Syndromes and Diseases Associated with Developmental Defects of Enamel
Premium Wordpress Themes by UFO Themes
WordPress theme by UFO themes