Dental Enamel Defects in the Primary Dentition: Prevalence and Etiology

Primary tooth
Tooth formation commences
Amount of crown formed at birth
Crown completed
Incisors
15–19 weeks in utero
Central incisors: three-quarters
1.5–3 months
Lateral incisors: two-thirds
First molar
16–22 weeks in utero
Cusps formed, not coalesced
5.5–6 months
Canine
19–22 weeks in utero
One-third of cusp
9–10 months
Second molar
20–22 weeks in utero
Tips of cusps
10–11 months
Reprinted from Sunderland et al. [1]. With permission from Elsevier
The enamel formed prenatally may be demarcated from that formed postnatally by an area of altered enamel known as the neonatal line. This band of abnormal enamel has a disorganized prism alignment and contains more organic material compared to the adjacent enamel [10]. As the entire primary dentition commences calcification before birth, the neonatal line is usually present in all primary teeth [11]. It may widen to a clinically visible area of abnormal enamel if a child experiences adverse neonatal conditions such as fetal distress and difficult birth delivery. Many DDE associated with perinatal illnesses are thus located at the neonatal line.

Several indices have been utilized to record DDE, the most popular being a descriptive index, the Developmental Defects of Enamel (DDE) index which does not attempt to identify the etiology [8]. There have been several modifications of this index, including simplified versions that can be applied for screening purposes. Many authors use the simplified modifications of the index to record DDE in the primary dentition for practical reasons [8]. Variations in prevalence of DDE reported in different populations are likely to be the result of differing criteria being used to define enamel defects. In addition, there are population variations resulting from differences in general health, and background fluoride exposure levels may also contribute to differences in the reported prevalence of DDE. Furthermore, in many studies, the recording of DDE in primary teeth several years post-eruption may be complicated by difficulties in diagnosing DDE once the lesions have become carious or have been restored [12]. Finally, differing field conditions during examination for DDE, such as variations in lighting and whether the teeth are dried prior to recording of the defects, may also contribute to differences in reported prevalence.
As there are few high-quality studies, the true prevalence of DDE in the primary dentition is unclear. Most prevalence studies on the primary dentition have been based on convenient samples from the general or special population groups such as medically compromised children. Table 1.2 lists selected reports of prevalence of DDE in the primary dentition published since 1996. There are significant variations in prevalence rates among different countries and population groups. A Chinese study showed that primary teeth with defective enamel were seen in 24 % of children, with opacities contributing 2 % and enamel hypoplasia 22 % [13]. In the USA, the study of Slayton and co-workers [14] reported a total prevalence of DDE in the primary dentition of 33 %, with 6 % of healthy children having at least one tooth with enamel hypoplasia and 27 % having enamel opacities [14]. In another USA study, Montero and co-workers reported an overall prevalence of DDE in the primary dentition of 49 % [15], while in Mexico, a DDE prevalence of only 10 % was found [20]. In Australia, the prevalence of DDE was reported to be 25 % in a primary school cohort [21], compared with a rate of approximately 24–44 % in Brazil [16, 17, 22]. In Holland, the prevalence of hypomineralized second primary molars was reported at 5 % and 4 % at the child and tooth level, respectively, with the majority of DDE being demarcated opacities [18]. More recently, a study in Iraq reported that 7 % of children had hypomineralization defects in at least one second primary molar [24]. In Tanzania, the prevalence of enamel defects was 33 %, with diffuse opacities constituting the most common defects (23 %), followed by hypoplasia (8 %) and demarcated opacities (5 %). In that study, the most frequently affected teeth were the primary central incisors (approximately 30 %), whereas lower central incisors (4–5 %) were least frequently affected [23]. Many indigenous communities, for example, in Australia, Canada, and the USA are reported to have higher rates of DDE, probably due to increased risks for poorer general health compared to other communities [25].
Table 1.2
Prevalence of DDE in the primary dentition by country

Table 1.3 shows the plethora of conditions that have been associated with DDE in primary teeth. Hereditary conditions such as amelogenesis imperfecta are caused by abnormalities in genes involved in enamel formation [26]. Other forms of DDE that may be inherited include those that are inherited as familial disorders or dysmorphic syndromes that show enamel defects [27]. Acquired systemic conditions that can cause DDE may be encountered perinatally, neonatally, or postnatally and include conditions such as birth trauma, metabolic conditions, and infections. Adverse conditions experienced by the mother during pregnancy that may cause DDE in the child include severe maternal vitamin D deficiency [28] and infection with syphilis [29]. Local factors impacting on the oral cavity, such as trauma and radiation, can also cause many DDE in the primary dentition. However, evidence for the associations between many of the acquired systemic conditions and DDE are based mainly on clinical studies and case reports. There are only a few instances such as the use of tetracyclines where direct causal links have been demonstrated between an individual adverse condition and enamel changes in primary teeth [30].
Table 1.3
Etiology of developmental dental defects in the primary dentition

Amelogenesis imperfecta is a genetic condition in which both dentitions are characterized by enamel defects and will be discussed in detail in Chap.​ 5.

There are several hereditary syndromes that affect the development of enamel in the primary and permanent dentitions (see Chap.​ 4). In inherited dermatological syndromes involving the skin, hair, and nails e.g. ectodermal dysplasia, epidermolysis bullosa, and tuberous sclerosis, both primary and permanent dentitions usually show generalized DDE [2]. In addition, hereditary conditions associated with defects in mineralization pathways that involve the parathyroid glands and vitamin D metabolism often show abnormalities of enamel development. The hypoparathyroidism featured in the velocardiofacial syndrome is thought to be associated with DDE in the primary dentition. The links between hypoparathyroidism and enamel defects are also encountered in rare congenital conditions such as the autoimmune polyendocrinopathy-candidiasis-ectodermal dystrophy syndrome [31]. In the inherited types of rickets, e.g., vitamin D-resistant rickets, generalized enamel hypoplasia often results from chronic hypocalcemia/hypophosphatemia present in this condition [32].

During the time of birth, adverse factors that have been reported to cause DDE include birth trauma, hypoglycemia, hypocalcemia and neonatal tetany. Many children with cerebral palsy caused by fetal distress and children with toxic levels of bilirubin (hyperbilirubinemia) associated with systemic conditions such congenital bile duct and liver disease have DDE in the primary dentition. In these children it is thought that the damage sustained by the ameloblasts reflects the systemic disturbances caused by these conditions [34, 35].

The DDE found in prematurely born children may be associated with neonatal complications of birth prematurity such as respiratory, cardiovascular, gastrointestinal and renal abnormalities, intracranial hemorrhage, hyperbilirubinemia and/or anemia. Deficient gastrointestinal absorption and inadequate supplies of calcium and phosphorus have also been associated with DDE in the primary teeth of prematurely born children [36]. Children who are born premature with low birth weight have been reported to show a higher prevalence of DDE compared to children born full term with normal birth weight. In children with birth weights less than 1,500 g and between 1,500 and 2,500 g, the prevalences were found to be 62 and 27 %, respectively, compared with only 13 % in children with normal birth weight [37]. In addition, in utero insults associated with small-for-gestational status have been recently suggested as an important cause of enamel hypomineralization/hypoplasia in primary teeth of very low birth weight children [38].
Local trauma may occur from laryngoscopy and endotracheal intubation which are often required in prematurely born children during management of respiratory distress. This can disrupt development of teeth [39]. In a preterm child, due to the lack of fulcrum support from an extremely small mandible, the laryngoscope is often placed on the anterior maxillary alveolus during intubation. This may result in inadvertent pressure being exerted on the developing primary maxillary incisor teeth. In severe cases, crown distortions, dilacerations and enamel hypoplasia/hypomineralization can result from such trauma from the laryngoscope. As the pressure from the laryngoscope is usually exerted on the left side, the most common teeth affected from laryngoscope trauma are the maxillary left incisor teeth. Figure 1.1 shows a maxillary primary left central incisor with severe enamel hypoplasia in a prematurely born child caused by traumatic intubation during the neonatal period. 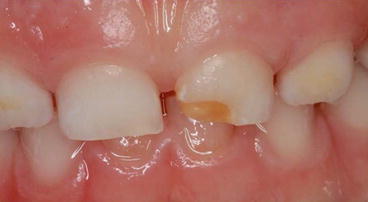 Tags: Planning and Care for Children and Adolescents with Dental Enamel Defects
Oct 30, 2015 | Posted by mrzezo in General Dentistry | Comments Off on Dental Enamel Defects in the Primary Dentition: Prevalence and Etiology
Premium Wordpress Themes by UFO Themes
WordPress theme by UFO themes