Tantalum (Ta) Malleable metal used in the past to fabricate plates, wires, and discs for implantation; atomic number 73 and atomic weight 180.948. 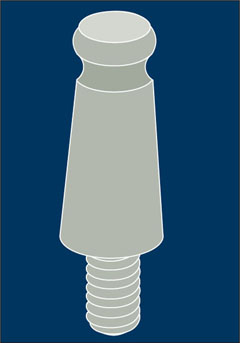 Tapping Final bone preparation of the screw thread configuration prior to implant placement.

T cell Thymus-dependent lymphocytes that are spherical cells of the lymphoid series and among the principal cells involved in the cell-mediated immune response.

Team approach Multidisciplinary combination and collaboration of care and/or therapy providers in the restorative management of a patient whose treatment involves dental implants.2-4

Telescopic coping Concept in fixed prosthodontics in which an intermediate coping can be designed to compensate for a malaligned retainer. Stacked crowns are fabricated with the contours to fit within the confines defined by a single restoration, without causing clinical or prosthetic complications associated with overcontoured crowns. This technique is used in overdenture therapy in which natural teeth are retained and restored using a crown (ie, telescopic coping) designed with minimal thickness to serve as a patrix component; the matrix component (ie, telescopic crown) is then incorporated into the prosthesis.6,7 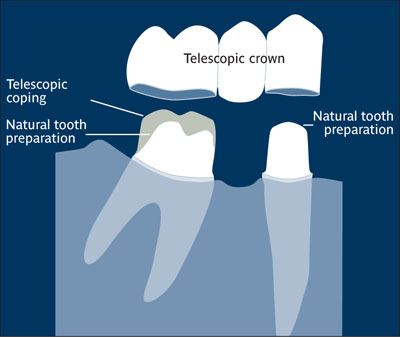 Temporary abutment Implant component used for a limited period of time prior to fabrication of the definitive prosthesis. 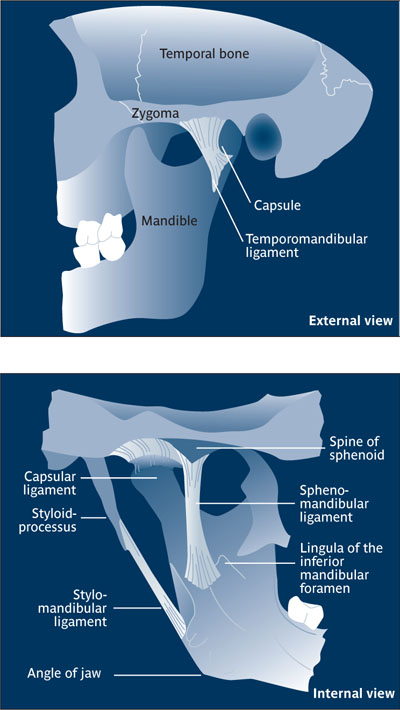 Temporomandibular joint Articulation between the mandibular condyles and glenoid fossa of the temporal bone is capable of translation and rotation movements. The disk is composed of dense fibrous connective tissue, while the posterior attachment is highly vascularized and innervated. The joint is surrounded by the capsular ligament, a fibrous capsule. See also: Temporomandibular articulation.

Tensile stress Force applied to an object that elongates or stretches.

Tension-free wound closure Wound closure that can be obtained without flap tension. Underlying periosteum may need to be released to provide coverage of an augmented site. See also: Releasing incision.

Tent pole procedure Operation in which the anterior part of an atrophic mandible is exposed by extraoral approach; periosteum and soft tissues are elevated to expose the superior aspect of the mandible. Dental implants are placed by tenting the soft tissue matrix to prevent graft resorption. Particulate autogenous bone chips are onlayed under the periosteum and around the implants.

Tetracycline Group of wide-spectrum antibiotics seldom used in treatment of oral infections but may be used for rhinogenic infections. Some are natural (ie, isolated from certain species of Streptomyces) and others are produced semisynthetically. Tetracyclines and their analogues inhibit protein synthesis by their action on microbial ribosomes and have anti-matrix metalloproteinase (MMP) activity. All have similar toxic and pharmacologic properties, differing mainly in their absorption and suitability for various modes of administration. They are effective against a broad range of aerobic and anaerobic gram-positive and gram-negative bacteria, as well as rickettseae, chlamydiae, and mycoplasmas. Because of the binding to calcium, it is not advisable to use tetracyclines in the treatment of infections in children.

Tetracycline bone labeling Permanent labeling of osteoid (bone matrix) as it mineralizes in a two-phase process. With up to 80% of complete mineral uptake regulated by osteoblasts, the remaining 20% is regulated by osteocytes. The osteoid zone is separated from the mineralized part of the bone by a layer called the mineralization front. This layer is able to bind tetracycline, resulting in a permanent fluorescent line.

Texturing Application of texture; to roughen.

Thread Grooves cut into the walls of a cylinder making it a screw (positive) or a screw channel (negative). These structures guide the insertion and removal of a screw or bolt. Also, the act of inserting a screw or bolt into its receiving channel. Example: The next step is to thread the occlusal screw into the abutment.

Major diameter of t. Greatest thread diameter of a tapered screw. The diameter by which the screw is designated. Compare: Thread, Minor diameter.

Thread lead Distance between screw threads as measured in the direction of the long axis of the screw. Compare: Thread pitch.

Thread pitch Distance between threads, in millimeters, as measured perpendicularly to the thread axis. In American units, thread pitch is given in threads per inch. Compare: Thread lead. 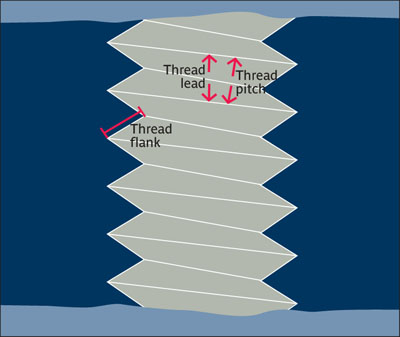 Threaded implant Implant body design resembling a screw, including helical threading developed into the external surface of the implant. Term does not describe the connnection present between the anchorage component and the prosthetic component, which may or may not include an internal bore within the anchorage component. See also: Implant thread.