Extraction is a common approach in orthodontic treatment to correct arch-to-tooth size discrepancies and skeletal problems. A number of factors should be considered before determining the need for extraction. The most important factors are:

Space closure is one of the most important steps in treatment after extraction. The strategy of space closure should be based on a careful diagnosis and treatment plan made according to the specific needs of the individual. No matter the technique used, the extraction space can be closed in three ways:

• A combination of both (moderate anchorage)1–4

Space closure with conventional intra-arch mechanics is a sort of tug-of-war between anterior and posterior segments. According to Newton’s third law, to every action there is always an equal and opposite reaction; therefore, for all distally directed forces (anterior retraction), the reaction will be mesially directed (posterior protraction). If maximum anchorage is indicated, the entire1—or at least 75% of the extraction space—needs to be closed by retraction of anterior teeth.2–4 In this case, there are several possible mechanisms to close these spaces:

• Retraction of anterior teeth without involving the posterior teeth by taking support from the other arch (ie, Class II elastics)

• Applying retraction force on the anterior teeth while headgear is worn

As far as maximum anchorage is concerned, excellent patient cooperation is usually necessary to obtain the proper interarch relationship. In the first four options (unless microimplant anchorage is used in the first option), the success of treatment is mainly dependent on patient compliance. Maximum anchorage is quite difficult to achieve unless intraoral differential tooth movement strategies are applied. Naturally, headgear or other anchorage auxiliaries such as transpalatal arch, lingual stabilizing arch, and Class II elastic support might be needed to obtain effective retraction.

In a maximum anchorage case, the timing of extraction is also important because posterior teeth can easily drift mesially after extraction. In some Class II, division 1 patients, for instance, it is necessary to wait until leveling is completed to extract the appropriate tooth and start the retraction process.

To achieve maximum anchorage, the mesial forces on the posterior teeth must be reduced or neutralized with differential moments, which use the difference in anchorage between the anterior and posterior teeth.

Classically, a tooth tips when a simple force is applied but resists if a couple is added to the system. As the moment increases, the moment-to-force (M/F) ratio, and thus the anchorage of the tooth, increases; therefore, the force system applied to the tooth defines its anchorage value based on more than simply the number and total surface of its roots. Occasionally, depending on the force system applied, the anchorage of a single-rooted tooth can be higher than that of a multirooted tooth.5 To obtain maximum anchorage in the posterior segment, the M/F ratio on the molars should be high enough to effect root movement. This can be achieved either by increasing the clockwise moment or reducing the mesially directed force acting on the molar. An M/F ratio of approximately 12:1 and higher results in root movement and a distal crown-tipping tendency of the posterior teeth, resisting the mesially directed force. Because the amount of force applied to each segment is the same, one should adjust the respective amount of moment on each side to get differential tooth movement. The M/F ratio on the anterior segment should be as low as 6:1 to obtain controlled tipping. Clinically, because controlled tipping is quicker and easier than root movement, anterior retraction can be achieved before posterior protraction occurs (Fig 9-1). Even though this mechanism works effectively, on a practical basis, nighttime headgear wear is usually needed to control molar inclination and neutralize the vertical force vector.

In moderate anchorage, the extraction space needs to be closed by an equal amount of retraction of anterior teeth and protraction of posterior teeth.1–4 When differential mechanics are used, the moments applied to the anterior and posterior segments must be equal and opposite. To obtain controlled tooth movement, an M/F ratio of approximately 6:1 to 8:1 should be applied to each segment. After the extraction space closes, higher moments are needed to obtain root movement.

If minimum anchorage is indicated, all1—or at least 75%—of the extraction space needs to be closed by protraction of the posterior teeth.2–4 This is nearly the opposite of maximum anchorage mechanics.

When differential mechanics are used to achieve minimum anchorage, the distally directed force on the anterior teeth must be reduced or neutralized with differential moments. To obtain maximum anchorage on the anterior segment, the M/F ratio on the incisors should be high enough to obtain root movement. This can be achieved by either increasing the clockwise moment or reducing the distally directed force acting on the anterior teeth. An M/F ratio of approximately 10:1 to 12:1 results in root movement and forward crown tipping of the incisors, resulting in resistance against the distal force. The M/F ratio at the posterior segment should be as low as 6:1 to obtain controlled tipping. Clinically, space closure with differential anchorage mechanics is not convenient. The anchorage of the anterior segment usually needs to be reinforced (eg, with a facemask worn at night) or the posterior teeth may need to be protracted one at a time because incisor anchorage is not strong enough for en masse protraction (Fig 9-2). As explained in the section “Molar Protraction” in chapter 8, the convenient way to close extraction spaces in a minimum anchorage case is to move the premolars and molars one at a time with push coils while the anchorage is supported with intermaxillary elastics. 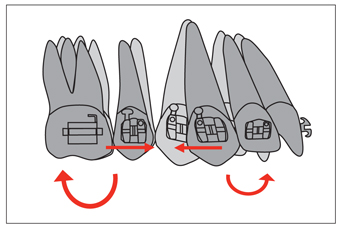 Fig 9-2 (a and b) In minimum anchorage frictional mechanics, the posterior teeth should be moved one by one with intermaxillary elastic support to avoid undesired retraction of anterior teeth.

Two basic biomechanical strategies can be used to close extraction spaces: frictional and frictionless. In either system, the tooth movements can be two-staged (canine distalization and incisor retraction) or en masse. Canine distalization is necessary in anterior crowding cases wherein round tripping (ie, protrusion and retrusion of incisors) is to be avoided. Thanks to flexible retraction archwires, use of microimplant anchorage mechanics, and new concepts in biomechanics, en masse retraction can be applied in most extraction cases.

In frictional mechanics, anchorage is a serious concern because a significant part of the force applied to tooth movement is lost in the friction between bracket, ligature, and wire. Therefore, particularly in patients in whom anchorage is critical, use of headgear is more important than in the frictionless system. Space closure in frictional mechanics has usually been performed in two stages to avoid straining the anchorage teeth; however, this technique is usually more time-consuming than one-stage (en masse) retraction,6 and it places more strain on anchorage than commonly recommended.

Canine distalization
In frictional mechanics, the canines move distally by sliding on the archwire. As long as the applied force is continuous and optimum (approximately 200 g),6

Tags: Biomechanics in Orthodontics Principles and Practice
May 22, 2016 | Posted by mrzezo in Orthodontics | Comments Off on Space Closure
Premium Wordpress Themes by UFO Themes
WordPress theme by UFO themes