Fig. 10.1
Schematic illustration of the origin of the whitish opaque appearance of initial caries and developmental defects. (a) Sound enamel is relatively translucent for visible light. Light beams (arrows) are primarily broken within the dentin. (b) In white spot lesions, pores contain media with a lower refractive index compared to enamel. Therefore, the light is scattered between the pores and the surrounding apatite crystals. Thus, the lesion appears whitish

Caries is formed after tooth eruption by dissolution of enamel induced by cariogenic acids being produced by cariogenic bacteria during fermentation of carbohydrates. In the past, caries was often regarded as a transmittable disease caused by an infection with bacteria like Streptococcus mutans (Keyes 1960). Today, caries is rather seen as a process triggered by the frequent intake of fermentable carbohydrates (sugars) and characterized by an ecological shift in the oral microbiology toward acidogenic and aciduric bacteria (Marsh 2003). Moreover, it is emphasized that multiple (mostly protective) factors such as oral hygiene, access to fluorides, or amount and composition of saliva influence the caries process (Paris and Meyer-Lückel 2012).
The cariogenic bacteria produce organic acids (e.g., lactic acid), which diffuse into the tiny pores of enamel and there dissolve the enamel apatite. This causes an increasing porosity within the enamel. Thus, in the initial stages of the disease the caries lesion is characterized by porous enamel. The word “initial” may be somewhat misleading because lesions that appear as white spots are often several hundred micrometer deep, often extending up the enamel dentin junction or even deeper. It may take weeks to months and years until a caries lesion reaches a stage where so much mineral is lost that the lesion collapses and a cavity forms. Nevertheless, caries is a dynamic process. If the interplay of multiple etiological factors shifts toward less cariogenic conditions, lesions can take up mineral from the saliva again and start to remineralize. Usually de- and remineralization cycles alternate several times a day, but if over time remineralization overweighs demineralization, the lesion does not progress but arrests. This remineralization is usually confined to the outer surface of the lesion where over time a so-called pseudo-intact surface layer is formed. This surface layer has usually a thickness of approximately 20–40 μm (but sometimes even more then 100 μm) and is considerably less porous than the underlying lesion body (Meyer-Lueckel et al. 2007). Thus, arrested or remineralized lesions look very similar to active progressing caries lesions except the higher mineralized surface. For this reason, it is a challenge to differentiate inactive lesions (enamel scars) from active progressing caries.
When white spot lesions arrest, along with the minerals also organic components such as food pigments can be incorporated into the surface layer. This is why some lesions may get a brownish discoloration and thus are called “brown spots” (Fig. 10.2). 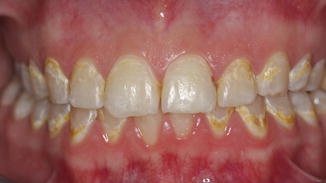 Fig. 10.2
Buccal caries lesions. A 21-year-old patient with high caries risk several months after debonding of orthodontic brackets. Non- and partly cavitated caries lesions are located in the cervical part of the buccal surfaces. The partly yellowish-brownish discoloration is a sign of inactivation. Thus, the lesions currently do not progress any more but are considered as an aesthetic impairment
Caries lesions usually develop in tooth sites where plaque formation is fostered such as in the fissure system or interproximal. On oral or buccal smooth surfaces plaque formation is usually increased at the cervical margin. Quite frequently, buccal caries lesions are observed after treatment with fixed orthodontic brackets. These appliances hamper the natural cleaning as well as oral hygiene and thus promote plaque formation. After removal of the brackets, these surfaces may be easily cleaned again. This improvement in oral hygiene leads to an arrest of many buccal white spot lesions. These lesions do not need any further treatment, as they are not signs of active disease, but enamel scars. From an aesthetic point of view, however, both active and inactive caries lesions are unattractive and may need intervention.
Buccal early caries lesions can be easily differentiated from developmental defects (see below) as caries only forms in plaque stagnation areas and thus caries on buccal surfaces is confined to cervical areas or the areas around the bracket base (Lovrov et al. 2007; Mitchell 1992).

Developmental defects are caused by a disturbance during enamel formation. Multiple factors such as toxic agents, infections, trauma, or irradiation have been elucidated. The resulting defects can be quantitative (with a lack of enamel volume) or qualitative (with a deficiency of enamel structure) or a combination of both. Here we concentrate on qualitative defects, which are characterized by increased enamel porosity.

Today, enamel fluorosis is probably the most prevalent developmental defect of human teeth. It is caused by chronic intoxication with fluorides during the phase of enamel formation. It is believed that daily fluoride doses of 40 μg/kg bodyweight may increase the risk of fluorosis in children and doses above 100 μg/kg almost certainly cause dental fluorosis (Twetman and Ekstrand 2013).
Histologically, enamel fluorosis is characterized by an increased porosity in the enamel (Thylstrup and Fejerskov 1978). In mild forms only the superficial enamel is affected. In severe forms nearly the complete enamel is porous and the surface may show pits and breakdowns. Clinically mild fluorosis appears as cloudy whitish discolorations following the perikymata lines. This is the reason for their wavy appearance. In more severe forms, the white lines converge to white spots that affect from up to the complete cusp (Fig. 10.3). Very severe forms show complete opaque and chalky enamel with pitting and often brownish discolorations. Fluorosis can be distinguished from caries, since fluorosis usually affects multiple homologous teeth, which were formed during the same period. Therefore, fluorosis is often seen on homologous teeth. 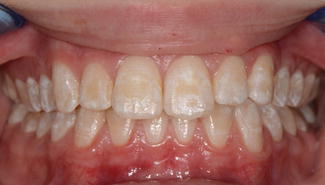 Another quite prevalent class of developmental defects is caused by traumatic injuries of primary incisors that cause a disturbance of enamel formation in the permanent successors (Diab and elBadrawy 2000). These defects can comprise qualitative defects (white or yellow-brown discolorations), quantitative defects (enamel hypoplasia), or combinations of both (Diab and elBadrawy 2000). Posttraumatic defects are mostly unilateral and just affect one or two teeth.

MIH is a developmental defect that affects the first permanent molars and incisors. In some cases, also second permanent molars and primary teeth show alterations. MIH lesions may appear as distinct and clearly demarcated whitish to yellowish discolorations (Willmott et al. 2008; Takahashi et al. 2009). As in other “white spots,” the whitish opaque discoloration is caused by an increased porosity of the enamel (Fig. 10.4). In contrast to fluorosis, the opacity is always distinct as the porosity affects the complete enamel depth from the surface up the enamel dentin junction. Yellowish, brownish discolorations are caused by organic components, which fill the porosities. In severe forms the increased porosity may also lead to enamel breakdown (Weerheijm 2003).

Fig. 10.4
Molar incisor hypomineralization (MIH). The disease is characterized by whitish opaque to yellowish (cheesy), distinct and clearly demarcated discolorations on incisors and first permanent molars (Image by M. Petrou)
The etiology of MIH is still unclear. It is commonly believed that the disease is multifactorial and that causing factors must be present during mineralization of the first molars and incisors, which means up to the first 4 years of life. As possible etiological factors, problems during pregnancy, infectious diseases, or intoxication with antibiotics or dioxins have been discussed (Takahashi et al. 2009).

The technique of resin infiltration was originally developed to arrest noncavitated caries lesions. The mineral loss of early caries lesions results in the formation and growth of porosities in the enamel matrix. These pores act as diffusion pathways for acids into the enamel and dissolved minerals out of the enamel. Caries infiltration aims to penetrate these pores with low viscosity light curing resins – so called infiltrants – that infiltrate the porous enamel driven by capillary forces (Paris et al. 2010). When the resin is light cured, it blocks the diffusion pathways and protects the remaining apatite crystals (Meyer-Lueckel and Paris 2008).
One positive side effect of resin infiltration is an immediate color change of the whitish lesion once it is infiltrated. The infiltrant resin has a refractive index of 1.52, which is close to that of enamel (1.62). Therefore, light scattering between the enamel pores and the surrounding enamel is significantly reduced when the pores are filled with resin instead of water or air (Fig. 10.5). Under best conditions, the resin-infiltrated lesions are optically masked and “disappear” (Paris and Meyer-Lueckel 2009; Eckstein et al. 2015). 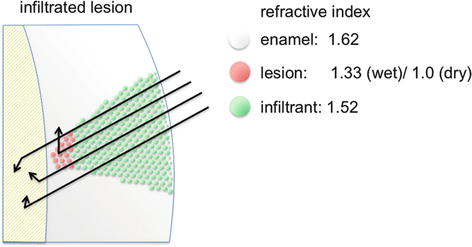 Fig. 10.6
Masking of fluorosis by resin infiltration. (a) Baseline. The patient complained about whitish discolorations (dental fluorosis) in the upper front. (b) After cleaning and application of light curing dam, the fluorosis becomes more distinct due to desiccation of the teeth. (c) The lesions surface layer is eroded by etching with 15 % HCl for 2 min. (d) After rinsing the etchant and drying, the teeth look frosty due to the etching pattern. Notice that the lesions are still visible as only the surface layer was eroded. Now ethanol is applied to check the completeness of surface layer erosion (for explanation, please see text). The ethanol is subsequently evaporated to desiccate the lesion as much as possible. (e) During application of the infiltrant resin, an immediate color change can be observed. After 3 min, resin surplus is removed and the material is light cured. A second infiltration step compensates possible polymerization shrinkage. (f) After polishing the lesions, the lesions in the upper front are nearly completely masked. After some days the aesthetic result is usually even better due to rehydration of teeth
Only gold members can continue reading. Log In or Register to continue