Fig. 12.1
(a, b) Pre-operative view of the discolored maxillary central incisors displaying brown stains caused by fluorosis
The patient agreed with the treatment plan. After preliminary impressions and fabrication of custom-fitted soft bleaching trays, we prescribed Opalescence 10%PF (Ultradent Products Inc.) and demonstrated how to dispense the bleaching gel into the tray. Due to scheduling conflicts, the patient was only able to return after 7 weeks (Fig. 12.2a, b). The brown stains were significantly lighter at this first recall. The patient had no permanent side effects such as tooth sensitivity or soreness of the gingival tissues, but she did report mild tooth sensitivity during the first few days of the treatment. At this time, we suggested one extra month of at-home whitening following the same regimen.

Fig. 12.2
(a, b) Clinical aspect after 7 weeks of overnight at-home whitening with 10 % carbamide peroxide with potassium nitrate and sodium fluoride in a custom-fitted tray
The second recall took place 4 weeks later (Fig. 12.3a, b). There had been a slight improvement in the color of the maxillary incisors. At this time, in agreement with the patient, we decided to perform the enamel microabrasion technique with Opalustre (Ultradent Products Inc.) on the four maxillary incisors (Fig. 12.4a, b). Six consecutive applications of 60 s each were carried out, with water rinsing between each application. Figure 12.5 depicts the intense dehydration immediately after removing the rubber dam.

Fig. 12.4
(a, b) The four maxillary incisors were treated with an enamel microabrasion compound (Opalustre, Ultradent Products Inc.). Six consecutive applications of 60 s each were carried out with water rinsing between each application 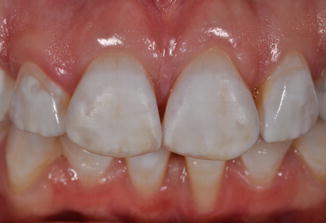 Fig. 12.5
Intense dehydration of the teeth immediately after removing the rubber dam
The patient returned to clinic 2.5 months later (Fig. 12.6). Although the patient was extremely happy with the color improvement, we suggested a few more weeks of at-home whitening with 10 % carbamide peroxide gel. Figure 12.7a, b represents the final result after 3 weeks of at-home whitening. At this time, the patient decided that she did not want to pursue further treatment. 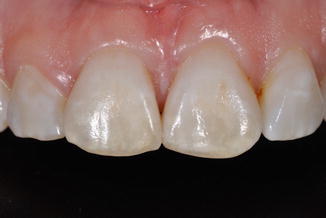