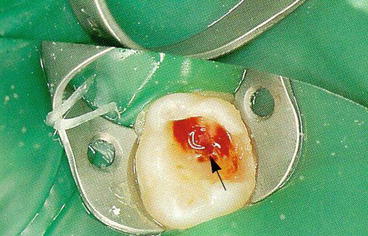 Fig. 5.2
Pulp exposed prior to de-roofing the pulp chamber
5.
Coronal pulp is removed with a round bur on a slow speed handpiece, and hemostasis is achieved by the application of a cotton pellet for no more than 5 min (Fig. 5.3). If hemostasis cannot be achieved, pulpotomy is no longer indicated as the pulp tissue is inflamed and hyperemic. In such condition, an alternative treatment would be needed (pulpectomy or even extraction). 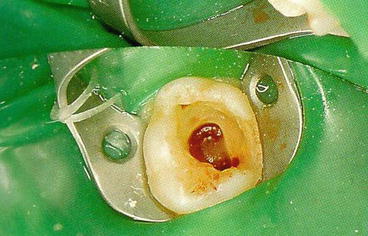 Fig. 5.3
Root canal orifices showing vital tissue after hemostasis
6.
Once hemostasis is obtained, the chosen material is placed and the tooth is restored.

Ideally, a pulpotomy medicament should be bactericidal, easy to use, harmless to the remaining pulp tissue and the surrounding structures, should not interfere with physiologic root resorption, and should be relatively inexpensive [5]. Needless to say, the ideal dressing material has not been found, and studies are constantly being conducted in both endodontics and pediatric dentistry to find such a product.
The search for this ideal material has been ongoing since the early 1900s when Buckley first introduced formocresol [6]. Over the years, many other materials have surfaced as potential candidates and have been classified into three major categories according to their effects on the remaining radicular pulp.

Some of the seminal studies for each method can be summarized in the following table taken from Ranly, 1994, and modified [7].
Thus, there have been numerous pulp dressing materials tested over the decades with varying success. This chapter will focus on the most common, most studied, and most successful representatives of each materials.

The Webster dictionary defines “devitalize” as means to deprive of vitality or vital properties, make lifeless, to weaken (merriem-webster.com/dictionary/devitalize). These products are designed to mummify the remaining pulp tissue and are represented by formocresol, laser, and electro surgery. As the most universally accepted method, formocresol will be discussed.

Formocresol was first introduced by Buckley as a treatment of non-vital permanent teeth in 1904 [6, 8] and consisted of equal parts of formalin and cresol. It was not until 1930, however, that formocresol was introduced as a pulpotomy medicament for non-vital primary teeth with the formulation of 19 % formaldehyde and 35 % cresol in a vehicle of glycerin or water [7, 9].
A multistep process of four visits was proposed for mummifying the radicular pulp tissue completely, thereby eliminating the likelihood of internal resorption [7]. Microscopic analysis by Emmerson et al. showed that most of the beneficial effects of formocresol was in the first 5 min; moreover, they showed that prolonged exposure caused calcific degeneration [10]. Thus, the original four-visit technique was revised to the currently accepted one-visit, 5-min-application, as introduced by Redig in 1968 [11].
Although this method of application saved time, it rendered the pulp tissue only partially vital leaving the tissue susceptible to abscess formation and/or internal root resorption [11]. In 1971, Loos and Han evaluated the effects of different concentrations of formocresol and found that a 1:5 dilution was as effective as the full strength [12].
Rolling and Lambjerg-Hansen studied histologically teeth that had been successfully treated with formocresol and observed that the remaining radicular pulps had severe inflammation adjacent to the amputation site, and most had areas of necrosis within the remaining pulp tissue without evidence of pulp fixation [13]. From these observations, the authors concluded that the formocresol option should be reserved as a means to keep the affected primary teeth functioning for a limited period of time. Regardless of this outcome, it has been the benchmark against which all other pulpotomy medicaments are measured.
Numerous studies have been conducted since the 1930s and have found success rates varying from 55 to 95 % [7]. These rates vary based on the type of study, criteria for success, and the follow-up period.
Over the years, formocresol has been labeled as being mutagenic, toxic, and carcinogenic [14–16]. However, little to no evidence actually exists to implicate formocresol in any of these allegations [17]. Regardless, the gavel has been swung, the verdict has been delivered, and formocresol as a pulpotomy medicament is becoming less popular. To further compound the issue, the International Agency for Research on Cancer classified formaldehyde as carcinogenic for humans in June 2004 [50]. With this new classification, the need to assess new materials to replace the long-standing formocresol has become crucial.

1.
Once the pulp tissue has been removed from the pulp chamber and bleeding has been controlled, a cotton pellet dipped in a 1:5 dilution of the original Buckley’s formocresol and the excess are expressed to ensure very little moisture on the cotton pellet (Fig. 5.4).

Fig. 5.4
Expressing excess of formocresol (right)
2.
The dampened cotton pellet is applied in the pulp chamber for 5 min (Fig. 5.5). 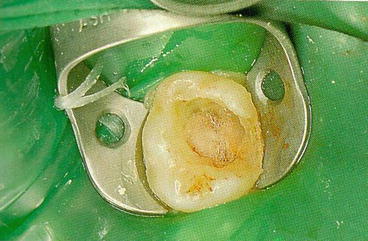 Fig. 5.5
Cotton pellet in pulp chamber
3.
The cotton pellet is removed, and the root canal orifices are expected to look like “black eyes”, with no bleeding. The pulp chamber is then filled with a thick paste of zinc oxide eugenol (ZOE) or intermediate restorative material (IRM) (Fig. 5.6), and the tooth is restored with the material of choice depending on remaining tooth structure. 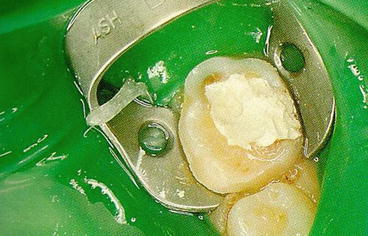 By definition, preserving means to keep from injury, peril, harm; to protect. Therefore, the objective of the materials included in this category is to minimally insult the tissue in order to preserve the vitality of the radicular pulp [7]. As representatives of this category, glutaraldehyde, ferric sulfate, and sodium hypochlorite (NaOCl) will be discussed.

Glutaraldehyde is a colorless, oily liquid that is used as an antimicrobial agent in water treatment lines, a preservative in cosmetics, and as a cold sterilizing material in the healthcare industry (​www.​cdc.​gov/​niosh/​topics/​glutaraldehyde/​).
Glutaraldehyde is a di-aldehyde that has superior fixative properties over formocresol and has self-limiting penetration, low antigenicity, low toxicity, and eliminates cresol. Glutaraldehyde has no bactericidal ability at low pH and therefore must be alkalinized to a pH of between 7.5 and 8.5 before it is effective. This increase in pH renders glutaraldehyde unstable, thus decreasing its shelf life to approximately 14 days [18]. Some formulations increase the life of this product to 1 or 2 weeks [18].
s-Gravenmade [19] proposed glutaraldehyde as an alternative to formocresol in endodontic procedures in 1975. He observed that, unlike formocresol, glutaraldehyde did not diffuse laterally or apically through the root length, making it a safer alternative to formocresol.
In 1980, Kopel et al. introduced glutaraldehyde into primary tooth pulpotomies as an attempt to find a material that was less toxic than formocresol, was self-limiting, and preserved the radicular pulp [20]. The authors used a 2 % glutaraldehyde solution over the amputated pulp stumps and then incorporated a drop of glutaraldehyde into the ZOE paste which was placed in the pulp chamber. Garcia-Godoy et al. used a 2 % formulation with similar findings [21]. The clinical and histological findings of both these studies prompted the proposal that glutaraldehyde was a viable alternative to formocresol as a pulpotomy medicament for primary teeth. The results of a study by Fuks et al. were not so promising and perhaps slowed down the impact that glutaraldehyde was gaining [22, 23].
Histologically, glutaraldehyde is a better fixative at higher concentrations and longer exposure times than formocresol, yet demonstrates less penetration into the subsurfaces, leading to less formation of zones of necrosis and granulation tissue [24]. Lloyd et al. studied various concentrations of glutaraldehyde over differing times in primates and found that the effectiveness of glutaraldehyde was inversely proportional to both the concentration and length of the exposure. The lower the concentration, the longer the glutaraldehyde needed to be in contact with the remaining radicular pulp for effectiveness to be maintained. Their results showed a concentration of 2 % with an exposure time of 10 min to have the most favorable success over time [25].
Several human studies have shown success rates ranging from 82 to 95 % [7], yet, perhaps due to its instability and short life span, glutaraldehyde has not gained the popularity that other materials in this category have.

Ferric sulfate is an agglutinating agent thought to produce hemostasis by blood reaction with both the ferric and sulfate ions as well as with the acidic pH of the solution [26]. The hemostasis achieved by this agglutination is thought to reduce the likelihood of clot breakdown and subsequent inflammatory response [27].
It has been shown that the application of ferric sulfate prior to calcium hydroxide in pulpotomized primate teeth had more favorable results than calcium hydroxide alone [28
Only gold members can continue reading. Log In or Register to continue