This chapter describes the normal control mechanism of respiration, and the control of blood oxygen and carbon dioxide. The normal rhythm of respiration is generated in the medulla oblongata as a result of the alternating activity of neurons driving the inspiratory muscles. As the depth of respiration is increased, these latter neurons or others in the same group initiate activity in the internal intercostal muscles and then in the abdominal muscles to assist in expiration. The nerve cells directly involved in controlling respiration are situated in two groups; one primarily controlling inspiration and the other primarily controlling expiration but with some neurons also serving inspiratory muscles. The main controlling factors in respiration are not directly related to the respiratory apparatus but rather to the attainment of the objectives of respiration—that is, the supply of oxygen to the tissues of the body as a whole, and the removal and disposal of the carbon dioxide produced by the tissues. Small changes in the partial pressure of oxygen in the blood do not normally provide an index of the respiratory need. The amount of carbon dioxide in the blood is much more directly related to its partial pressure. The variables controlled and monitored in the control of respiration are the partial pressures of oxygen, carbon dioxide, and the concentration of hydrogen ion in the blood.

Control of the normal rhythm of inspiration and expiration

The normal rhythm of respiration is generated in the medulla oblongata as a result of the alternating activity of neurones driving the inspiratory muscles-the diaphragm and the external intercostal muscles – and neurones which, in the resting or relaxed subject, inhibit their activity. As the depth of respiration is increased, these latter neurones, or others in the same group, initiate activity in the internal intercostal muscles and then in the abdominal muscles to assist in expiration. Finally, other accessory muscles may come into play (p. 128). The rhythmic activity of breathing, then, results from the activity of a neuronal cycle-generator in the brainstem, and not, as in the circulatory rhythm, from a cycle generated by the muscle pump itself.

The nerve cells directly involved in controlling respiration are situated in two groups, one primarily controlling inspiration and the other primarily controlling expiration but with some neurones also serving inspiratory muscles (Fig. 17.1). The first group is the dorsal group, lying in the tractus solitarius. These neurones show rhythmic activity and they have axons, or are linked to axons, which travel in the phrenic nerve to the diaphragm, whose contraction results in inspiration. Branches of these neurones also pass to stimulate neurones in the other (ventral) group. 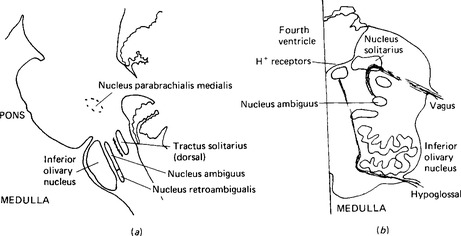 Figure 17.1 The centres for the control of respiration, (a) Parasagittal section through the brainstem to show the nuclei involved in respiration, (b) section through the medulla oblongata of the level of cranial nuclei X and XII. Only one side of the medulla is shown. The positions of the respiratory nuclei and the receptors for the pH of cerebrospinal fluid are shown.

The second group is found in two adjoining nuclei – the nucleus ambiguus more cranially and the nucleus retroambigualis more caudally. Neurones of the nucleus ambiguus send branches to travel in the vagus nerve to reach the accessory muscles of respiration on the same side of the body. Neurones of the nucleus retroambigualis serve the intercostal muscles and assist in both inspiration and expiration. The nerves to the expiratory internal intercostal muscles pass only to the contralateral muscles but those to the inspiratory external intercostals pass to both contralateral and ipsilateral muscles.

Impulses from the dorsal ‘inspiratory centre’ neurones stimulate the ventral ‘expiratory centre’ neurones, and these in turn then inhibit those of the dorsal group. When the activity of the dorsal group increases, more of the ventral group are stimulated, and active expiration is added to the passive response produced by inhibition of the inspiratory neurones. In either case a cycle of activity is set up. When damage to the medulla involves the respiratory neurones respiration can still continue by voluntary activity, but only in the conscious subject. The few unfortunate individuals with such lesions (a condition known as Ondine’s syndrome) must live in an artificial respirator so that breathing can continue while they sleep.

The activity of the respiratory centres is adjusted by a higher centre, situated in the pons, formerly referred to as the pneumotaxic centre but now known to be a part of the nucleus parabrachialis medialis (Fig. 17.1). This nucleus receives inputs from the vagus nerve, the glossopharyngeal nerve, and from higher centres including the cerebral cortex. Many of the control mechanisms which adjust respiratory rate and depth operate through this nucleus. The respiratory centres are also affected by activity in nearby chemoreceptors which are sensitive to the pH of cerebrospinal fluid and hence indirectly to blood partial pressures of carbon dioxide.

Although control of lung ventilation is primarily concerned in maintaining blood oxygen and carbon dioxide concentrations at favourable levels, there are in addition some within-system reflexes to protect the pulmonary apparatus and to balance rate and depth of ventilation to achieve the desired results in the most economical manner. Since not all the inspired gas undergoes exchange with the blood (p. 129) deeper respiration is more efficient than shallower. Two further constraints appear at high rates of respiration: as the tidal volume is increased the work necessary to overcome the elastic recoil of the lungs and thorax increases, and at high rates of respiration the increase in volume flow increases the work necessary to overcome airway resistance. At very high rates of respiration the time available for each breath may be insufficient to allow enough air to be drawn into the lungs with each breath.

A number of sensory endings in or around the lungs transmit information to the medulla via the vagus nerves. The best known of these are stretch receptors in the thorax which are stimulated by inspiration; as stimulation increases, impulses pass up the vagus to inhibit the inspiratory neurones. This is the inflation, or Hering Breuer, reflex. The rhythm of respiration is initiated by the inspiratory and expiratory neurones themselves, but this reflex modifies the pattern of inspiratory depth and frequency to maintain a balance between them. This sensory input is only one of the factors influencing the activity of the respiratory neurones. A deflation reflex, in which afferent fibres of the vagus nerve show increased activity towards the end of expiration and then stimulate the inspiratory neurones, has also been described – but this potential reflex appears unimportant in normal breathing. From time to time, the rhythm of breathing is interrupted by deeper inspirations. These seem to be intermittent corrections to adjust discrepancies arising from the manner in which the body endeavours to maintain optimum efficiency of breathing in terms of rate and depth. Their occurrence is an example of a paradoxical reflex: a positive feedback reaction to inspiration. Sometimes they are apparent as sighs. Higher centres may also control inspiration and expiration, as in speech (Chap. 20) and in sudden shock – when prolonged inspiratory spasm may occur.

Control of breathing to protect the respiratory apparatus

Other stimuli may modify the breathing pattern. The reflex reaction to irritation of the nasal mucosa is a sneeze. It consists of a deep inspiration followed by a rapid uncontrollable expiration. Stimulation of chemoreceptors in the trachea or in the bronchi may cause coughing or increased respiration in an endeavour to blow away the irritant. This is seen with some gaseous anaesthetics which initially cause rapid shallow breathing. Mechanical irritation in the trachea or bronchi usually causes coughing. In coughing the glottis is closed and the pressure in the thorax raised by the action of the expiratory muscles. Sudden release of the alveolar air through constricted bronchi gives a high velocity airflow which may reach as high as 500 mph. The reflex is sensitised by excessive inflation and deflation so that it may become paroxysmal. Irritants such as dust and cigarette smoke increase mucus production from the protective glands of the airways, damage the cilia on the cells lining the airways, and may cause coughing.

The airways may be protected by the inhibition of inspiration. Breath-holding may be voluntary or may occur as part of another reflex. Thus inspiration is inhibited during swallowing and vomiting. The breath is held when diving into water and during weeping. Voluntary breath-holding is terminated by the stimulus of increased carbon dioxide and decreased oxygen concentrations in the blood so that preliminary hyperventilation increases the time during which the breath can be held. The period may also be extended by making use of the swallowing reflex. Another means of protecting airflow is by sniffing. This consists of one or more rapid inspirations which are limited to the nasal cavity. Such inspirations help to sweep back nasal mucus which may then be swallowed or expectorated.

Other involuntary modifications of the breathing pattern

Some changes in respiration are involuntary but their significance is difficult to identify. These include the sigh, the yawn and the hiccough. Sighing is a slow deep inspiration followed by a slow expiration which results in a decrease in blood carbon dioxide concentration and an increase in blood oxygen concentration. The stimulus is unknown. The yawn and the hiccough are even more curious. Yawning is a long deep inspiration through the open mouth followed by a slow expiration, often accompanied by a stiffening or stretching of the trunk. Although it is associated with sleep, weariness or boredom the actual stimulus is unknown. The hiccough is an intermittent spasmodic constriction of the diaphragm. Although it may be caused by many conditions affecting thoracic or abdominal organs there is usually no identifiable stimulus. Treatments are completely arbitrary – swallowing, rebreathing from a paper bag, a sudden fright or a sharp stimulus like drinking vinegar and sugar.

Tags: Physiology for Dental Students
Dec 5, 2015 | Posted by mrzezo in General Dentistry | Comments Off on Normal control of respiration and the control of blood oxygen and carbon dioxide concentrations
Premium Wordpress Themes by UFO Themes
WordPress theme by UFO themes