This chapter focuses on the control mechanism of the osmotic activity of the blood and of the blood volume. There is a close interrelation among the salt content, the osmotic activity, and the volume of the blood. Because all the body fluid compartments are in equilibrium, changes in any of these blood variables will also affect other body fluids. The body controls osmotic activity in the blood by adjusting water balance. It is essential if blood pressure, and therefore, the circulation of blood, is to be maintained, that a sufficient volume of blood be present in the circulatory system. The control of blood volume occurs principally in the kidneys although other mechanisms exist Blood volume may be sensed by stretch receptors or by pressure receptors. The low pressure side of the circulation, the capacitance vessels, normally contains the greater proportion of the blood volume, and so stretch receptors on this side of the circulation are well placed to monitor blood volume. Such sensors are located in the walls of the great veins and in the walls of the atria. They can respond to both increases and decreases in blood volume. A decrease in blood volume causes a decrease in blood pressure. Blood volume is always restored by increasing fluid intake and fluid retention. The indirect method of increasing fluid retention by causing retention of salt is not by itself sufficient to restore the original volume. Changes in blood volume can affect blood pressure that, in turn, affects blood flow and the tissue gas equilibria. There may, therefore, be routes by which impulses from the blood gas chemoreceptors may influence control of blood volume.

Control of the osmotic activity of the blood

There is a close inter-relation between the salt content, the osmotic activity, and the volume of the blood. Indeed, because all the body fluid compartments are in equilibrium, changes in any of these blood variables will also affect other body fluids. Thus, although this chapter considers control of blood osmotic activity separately, the real-life situation is much more complex than that presented here.

The body controls osmotic activity in the blood by adjusting water balance (Fig. 16.1). The sensors are the osmoreceptors located in the hypothalamus, principally in the supra-optic nucleus. The osmoreceptors are cells particularly sensitive to osmotic changes, shrinking as the extracellular fluid becomes hypertonic, and swelling as it becomes hypotonic. The normal osmolality of the blood plasma is around 283mosmol/kg, with a range of some 20mosmol/kg on either side of this. This is equivalent to an osmolarity of about 300mosmol/1 (osmolality refers to the number of osmotically active particles in a kilogram of solute, osmolarity to the number in a litre of solute). 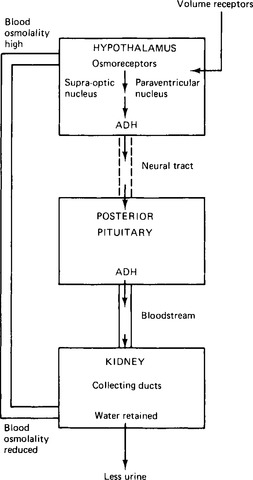 Figure 16.1 The mechanisms of control of blood osmolality.

The cells which synthesise antidiuretic hormone are nerve cells with axons extending into the posterior pituitary gland. They are probably not the actual osmoreceptor cells but cells in communication with them. They produce and store the antidiuretic hormone in granules in the cell body, and then transport it in combination with a protein carrier, termed a neurophysin, along their axons, down through the pituitary stalk to the posterior pituitary gland. Here it is released into the bloodstream in response to an increase in blood osmolality. The hormone passes via the bloodstream to the effector organ, the distal nephrons of the kidneys.

The hormone binds to receptor sites on the serosal walls of the cells of the distal nephrons and cyclic 3, 5-AMP is released to diffuse across the cells and increase the permeability of the mucosal walls of the cells. The calculated effective pore size of the cell walls increases from around 0.8 nm to 4.0 nm. Although the effective change is one in diffusion of water, other small molecules such as urea will also diffuse more readily. Since the collecting duct is passing down through regions of increasing osmotic activity, water is reabsorbed and a more concentrated urine results. Although antidiuretic hormone decreases the rate of blood flow through the vasa recta and thus helps to maintain the osmotic gradient in the medulla, there is a natural limit on the amount of concentration which can be achieved. In man the maximum level is 1400mosmol/l. About one third of this osmotic activity is due to the urea content and the remainder to the salt content. One consequence of this limit of concentration is that sea water cannot be used as a water source for man because its salt content is too high.

By these means the osmotic activity of plasma is raised or lowered by the excretion of more or less water without changing the total salt content. This leads to concomitant changes in blood volume which must also be compensated. Where a conflict arises between the need to maintain blood volume and the need to adjust osmolality, the blood volume is protected at the expense of osmolality. There is a minimum acceptable blood volume below which cardiac operation is inefficient.

Activity of the hypothalamic osmoreceptors, or the secretion of antidiuretic hormone, is modified by many other influences. Sleep or wakefulness, stress, emotional factors, external temperature, levels of circulating corticosteroids and adrenaline, all affect either the level of osmoreceptor activity or the amount of ADH secreted.

Tags: Physiology for Dental Students
Dec 5, 2015 | Posted by mrzezo in General Dentistry | Comments Off on Control of the osmotic activity of the blood and of the blood volume
Premium Wordpress Themes by UFO Themes
WordPress theme by UFO themes