This chapter reviews the physiological concepts related to various control mechanisms. The fundamental concept in physiology is that of control. This includes control of the internal environment so as to permit cell and organ function to continue at an optimal level, and control in the sense of the direction of both conscious and unconscious functions on which, however indirectly, the survival of the individual and the species depends. Most control systems are termed feedback systems, because information about any changes that are occurring must be fed back to some controller that can cause an appropriate action, usually one to restore the original condition. Systems of this kind are negative feedback systems—the active change reversing the initial change. Negative feedback systems are inherently stable, always resisting change. They are typical of biological systems. The control of a central heating system provides an everyday example of a negative feedback system. Heaters are set to maintain a given temperature in a room. Any departure from the set temperature causes the heaters to operate more actively if temperature falls, or less actively if temperature rises. Positive feedback systems, with their natural instability, are much less common. The chapter describes reflex as as an involuntary response to a peripheral stimulus. Reflexes like coughing, sneezing, vomiting, and swallowing have centers in the medulla. Reflexes involving visual stimuli pass through the midbrain. Studies on men with spinal or brain injuries have demonstrated different levels of reflex control.

The fundamental concept in physiology is that of control. This includes control of the internal environment so as to permit cell and organ function to continue at an optimal level, and control in the sense of the direction of both conscious and unconscious functions on which, however indirectly, the survival of the individual and the species depends. Control of the internal environment means the maintenance of an environment for the cells of the body, stable in temperature, in osmotic activity, in pH and in the concentrations of ions, nutriments and metabolites. The term homeostasis is used to describe this maintenance of a stable environment. In this chapter the essential elements of a control system will be considered; this outline will form a framework for the consideration of homeostatic mechanisms and other control systems in subsequent chapters.

The second type of control referred to above is that necessary for action, and is therefore more characteristic of conscious activity. This type of control includes positive feedback mechanisms, where a detected change induces a response designed to increase the magnitude of the change itself. It also includes the type of control known to engineers as servo control, in which a small induced change is amplified by various mechanisms to provide a final much larger change. Positive feedback systems are inherently unstable, accentuating changes imposed upon the organism.

The control of a central heating system provides an everyday example of a negative feedback system. Heaters are set to maintain a given temperature in a room. Any departure from the set temperature causes the heaters to operate more actively if temperature falls, or less actively if temperature rises. Positive feedback can be illustrated in a supermarket price war. One firm cuts prices, others to maintain sales follow suit. The first firm is then compelled to cut prices further if it does not wish to lose customers: a cycle of price cutting is set up. The cycle ends, however, when firms can no longer cut their prices further and go out of business. Servo control is exerted in steering a ship: a small, effortless movement of the wheel produces a much larger, more difficult movement of the rudder and this in turn causes the whole ship to change direction.

The basic elements of a control system are summarised in a block diagram (Fig. 13.1). The variable factor to be controlled must be measured by some sensor – in biological terms, a receptor. Some receptors monitor the variable directly, others indirectly. Thus the carotid body chemoreceptors assess directly the partial pressure of oxygen dissolved in the blood. The chemoreceptors of the medulla oblongata measure blood carbon dioxide, but they do this by measuring the hydrogen ion concentration in the cerebrospinal fluid, a related variable. 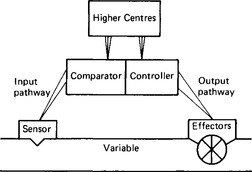 The controlling centre, sometimes called the comparator, is usually in the brain or spinal cord. Here the information from the sensor or sensors is compared with some internally set level and any departure from the set level causes appropriate instructions to be sent out. Sometimes the comparison of observed values with the set values may occur at the sensors themselves. A room thermostat provides one example, since the required temperature is set in a device which is the actual temperature sensing device and is also the control switch for the heating system. The hypothalamus acts both as a sensor and a controller for the osmotic activity of the extracellular fluid. The term controlling centre is therefore preferable for the area in which incoming information is translated into outgoing instructions and the term comparator reserved, if necessary, for the particular structures where the comparison takes place, whether in the control centre or elsewhere.

The output pathway may be via nerves or via hormonal messengers in the bloodstream. It may be so short as to have no separate identity, or it may be a clearly defined pathway of considerable length.

The effector organ is usually muscle or a gland, capable of changing the controlled variable.

These components make up the simplest possible feedback circuit. The circuit may be complicated by the duplication or multiplication of its components – several sensors, several input pathways, hierarchies of control centres, multiple output pathways, several effector organs. In the control of blood pressure, for example, the effector may be the heart or the blood vessels. In the control of rising body temperature, blood vessels may dilate and sweat glands may secrete.

Further complications arise in the possibility of control of the controlling centre itself, either by alteration of its comparator function or by directly altering its activity.

Variation of the set level

The set level of a feedback system in the body may be altered in a number of ways. For example, in exercise the temperature setting of the hypothalamic control centre is set at a much higher level.

Activity of the limbic brain may alter the setting of the blood pressure controlling system in the medulla oblongata by means of impulses passing through the hypothalamus. Stiffening of the arterial walls with increasing age reduces the sensitivity of the carotid sinus stretch receptors: as a result blood pressure is maintained at a higher level in the old than in the young.

Normally the regular alternation of breathing, inspiration and expiration is controlled by the respiratory centres in the medulla oblongata but this control can be voluntarily over-ridden during breath-holding, or during speech.